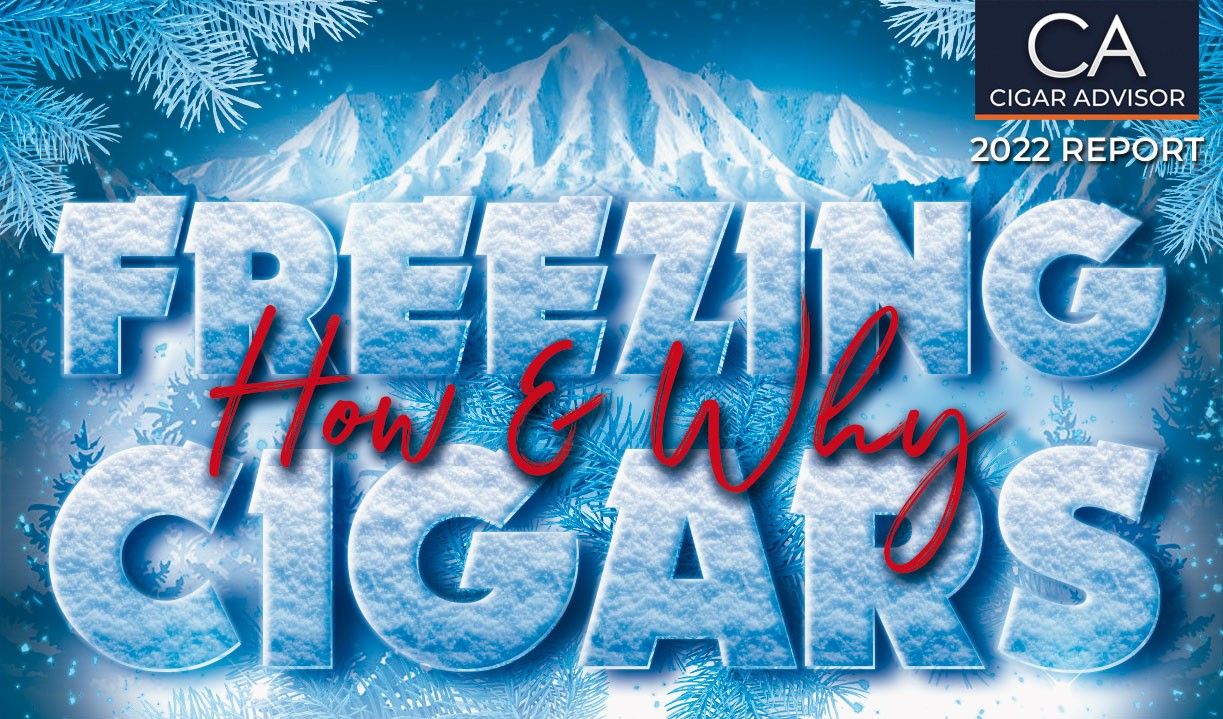 Freezing Cigars – How and Why to Do It

When and Why You Should (or Shouldn’t) Freeze Your Cigars

From tobacco beetle infestations, to keeping cigars fresh without humidification, the question of whether you should freeze your cigars (and how to go about doing it) comes across our desks often. There’s a lot of dated information out there, so we’re updating our guide to give you the best chance at freezing your cigars successfully.

First, a word of warning: we would never recommend freezing your cigars unless it’s absolutely necessary. If done incorrectly, it can spell disaster for your hard-earned stogie stash.

Can you freeze cigars?

Yes, you can. Just remember that cigars do not respond well to sudden changes in temperature and humidity. But before you go about freezing your cigars, let’s first talk about when and why you’d want to freeze them in the first place.

When should I freeze my cigars?

You should only freeze your cigars when dealing with a tobacco beetle infestation – Lasioderma serricorne. These harmless beetles lay microscopic eggs in tobacco and are found in virtually every leaf. While they pose no threat to humans, tobacco is another story. When humidity and temperatures get too high in your humidor, the eggs begin to hatch, and the larvae burrow their way out of your cigars. You may have noticed pinholes and tobacco dust in your humidor once or twice during your history of smoking – these are the tell-tale signs of tobacco beetles.

If you find evidence beetles, however, it’s not the end of the world, especially if you catch it early. We’ll talk more on how you go about freezing your cigars in the next section. Just remember – keeping tabs on the temperature and relative humidity of your humidor will prevent you from ever needing to freeze your cigars. An ounce of prevention is worth a pound of cure.

How do I freeze my cigars?

So, you’ve got beetles…now what? First things first: discard the affected cigars and quarantine the rest away from your humidor, packed loosely in zippered plastic bags. Empty and vacuum out the humidor, then reestablish proper conditions not exceeding 70 degrees and 70% relative humidity.

Remember when we said that cigars don’t fare well with sudden humidity and temperature changes?

Here’s how to freeze cigars gradually:

Place the bagged cigars in the refrigerator for a few hours. Once they’re cool, put them into the freezer for 24 to 48 hours. After that, place them back into the refrigerator for a day or so they gradually thaw. By then, they’ll be perfectly ready to go back into your humidor, but you can even pop them in a cooler to warm further before returning them to general population. Tempting as it may be, trying to speed up the process by defrosting your cigars in a microwave will permanently ruin them.

Even after they’re back in your humidor, it’s best to give them another few days – even a week – to recover their humidity before smoking them.

Remember: slower is better and keep their time in the freezer short. Refrigerators and freezers are typically very dry and can easily ruin your cigars if they’re kept in them too long. Ever seen some wilted veggies dried out in the crisper drawer? You don’t want your cigars looking like that.

Not all freezers are created equal:

Back in the day, we’d have to chisel ice build-up out of our freezers or risk certain flooding of your kitchen. I always had enough that I could have made snow cones for the whole block. But just like the inventor of microwaves helped people not spend hours cooking a meal, frost-free models have made it so that we no longer have rogue snow drifts to deal with inside modern freezers. How did they accomplish this? By removing as much humidity as possible. Great when it comes to preventing ice. Bad when it comes to keeping your cigars hydrated.

My friend keeps his cigars in the freezer and says they smoke perfectly. Can I keep them there?

I have a friend who thinks Earth is flat. And another who insists that salt makes water boil faster (it actually boils slower). Thing is, people are going to believe what they believe. The only ammunition you have is information. No matter how many buddies you have that swear up and down their cigars taste great after a long nap in the freezer, the fact is, freezers dry out cigars. Not just the surface, but the oils inside the wrapper, binder, and filler tobaccos.

You can technically rehydrate any cigar with moisture. But those natural oils and sugars – the things that make the cigar taste like…that cigar– can never be replaced. So yeah, you can freeze a cigar for 10 years, slowly rehydrate it over a few weeks, and then smoke it. It might not even have burn issues. But it’s gonna taste like cardboard. Anyone who tells you otherwise is fooling themselves. Don’t let them fool you, too.

I freeze my cigars. Been doing it for years
Haven’t noticed any difference. They don’t dry out. And you can squeeze them when they come out and see they are not dry. I used to work for a National Potato chip company and an old lady was buying a lot one day and I asked her if she was having a party. She said no. She bought them on sale and froze them. So I froze some Fritos for a year and they tasted the same as when they were put in. So I started freezing cigars. End of the story

Years ago I received a monthly shipment from a major online cigar distributor and inside a brand box was beetles. I dealt with the issue and emailed the company to warn them in case others see it. I figured it was due to slow delivery during summer. The following shipment came with special sealed tape around that particular brand, so I assume word got out. Since then, I always froze cigars that traveled during May-Oct in the South. During the 20-21 Covid parcel slowdown, I always froze them because I could not be sure how long they sat in shipment. Never had a problem with splitting after freeze and I lose no taste in the tobacco.

True. That’s a good solution. There are also a number of factories that freeze the cigars before packaging to avoid beetles.

[…] still standing in your humidor. The enemy of cigar beetles is the cold, so the challenge is to freeze your cigars without damaging them. If you rush the process, you risk your cigars swelling and cracking. The […]