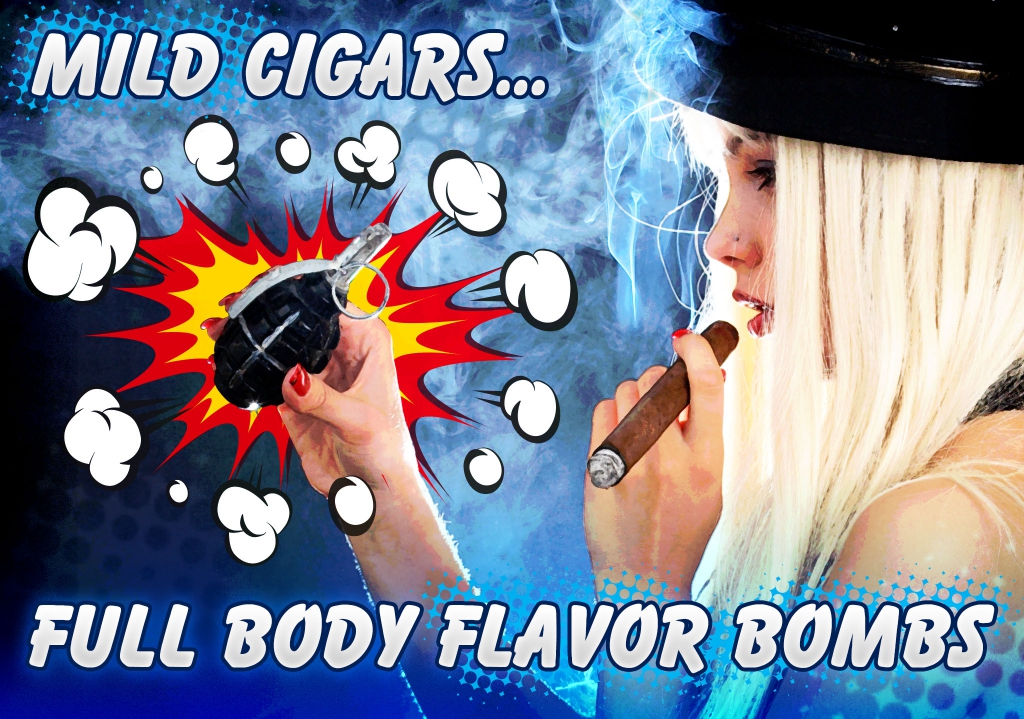 Now you may think I’m contradicting myself by saying there are mild, full bodied cigars. Humor me for a second while I blow your mind. Full bodied does not mean full strength. The strength of a cigar simply translates to the amount of nicotine that is jammed into a cigar. Body is determined through the entire smoke through a combination of strength, flavor, complexity, and believe it or not, smoke production. Essentially, our taste buds and receptors in our mouth can determine if a smoke is thin or thick. This is what’s referred to as “mouth feel,” and foodies refer to this phrase far more often than they should to make themselves feel legitimate. Thinner smoke production is less full bodied, and thicker smoke production is more full bodied.

Okay, so maybe I’m cheating a little bit with the La Aurora Preferidos Cameroon. It isn’t a true mild cigar in terms of strength, but it is mild–medium in strength, so I’m counting it. To be honest, it’s more on the mild side of the strength-o-meter than medium. However, even for a mild strength cigar, what you’re left with is pure flavor. No, not peppery, extreme, blast in the face flavor. Instead, this is a more refined flavor.

Cameroon tobaccos are known for their sweetness. Add that to the fact that these suckers are aged extensively in oak barrels, and you have the taste of oak, cedar, tobacco, sweet caramel, and other flavors that dip in and out, for a complex smoke that is out of this world. Not only that, but the La Aurora Preferidos Cameroon puts on a solid smoke show, too. Dense smoke pours off this stogie to fill the room with a pleasant aroma to complement the cigar and round out the smoke. I’m not going to lie, the smoke lingers long enough to throw a sick laser light party, too. And lasers are awesome.

Again, listed on the meatier side of mild in terms of strength, the CLE Connecticut is another flavor bomb made by Christian Eiroa. If you know who Christian is, then you understand why I’m putting one of his cigars on the list. The guy’s family started Camacho cigars and is the product of the industry through his father. After leaving Camacho, he poured everything he knows into his new CLE line of cigars. By starting a new boutique cigar company, he can oversee the flavors of each of his lines with ease, and can use more rare tobaccos to squeeze every ounce of flavor he can into his stogies.

The CLE Connecticut is, obviously, a Connecticut wrapped stogie having uncharacteristic flavor up front with a blast of pepper, which then settles into a velvety, creamy, woody, and citrusy smoke, with all flavors fighting for the top spot on the flavor wheel. This battle royal kicks the stogie up the complexity ladder to reach the championship belt in this reviewer’s opinion. But don’t take my word for it. I urge you to pick some up for yourself and let the CLE Connecticut suplex your taste buds into submission.

This is another mild cigar that is off-the-charts amazing, that no one has probably ever heard of. When I got into the cigar industry in 2010, I thought Kristoff was the bee’s knees. Every one I tried was a home run. I was a little disappointed when I found out that practically no one had heard of these sticks and they were considered a boutique cigar, which was still an up and coming segment of the industry at the time. I guess I’m a bit of a cigar hipster since I liked them before they were cool. Now that boutique cigars are all the rage and aren’t going out of style the way that POGs did back in the 90s, Kristoff has become the boutique kingpin I always thought it was.

Among their slew of full strength offerings is the unassuming mild strength flavor bomb that is the Kristoff Brittania. Consistent with the Kristoff name, the Brittania is flawlessly constructed and features a pigtail cap created in the traditional Cuban rolling style. The draw is on point, and the flavors are simply remarkable. Each draw is like you’re running your tongue up and down Willie Wonka’s flavored wallpaper. It’s as if the masterminds at Kristoff sat down and said “you know what? We need a mild strength cigar that hits every note of the flavor wheel at least 8 times.” They accomplished their goal and then some with this full bodied chew toy. And yes, I used chew toy to describe a cigar. I’m trying it out to see if it sticks.

If saying that name doesn’t automatically prove my point that this is jammed with more flavor than a turducken, deep fried, slathered in cranberry sauce, with a side of hot apple cider (spiked, of course), and apple pie à la mode for dessert, then I guess I’m forced to point out the obvious to you. AJ Fernandez is a genius, and I mean absolute genius, when it comes to blending cigars. I can’t think of one stogie in his entire repertoire that misses the mark in terms of bold flavors. The San Lotano Connecticut is no different.

These are high end, ritzy as hell cigars, at blue collar prices. But the real story is in the mind-blowing dance the fillers and wrapper put on in terms of flavor. And no, I’m not talking awkward middle school arms-length dances. This is straight bump and grind blending. AJ Fernandez commissioned the help of an Ecuadorian grown Connecticut wrapper instead of US shade grown for added flavor, mixed in some premium well aged longfillers, and allowed the tobaccos to marry together before boxing and shipping. The end game is a perfectly balanced stogie with notes of cream, wood, and nuttiness for a truly filling smoke. I don’t think any other cigar on the market utilizes a Connecticut wrapper as well as AJ Fernandez utilized it here. In spite of mild cigars mellow reputation, this is a full-on palate pleaser.

Did you really think we were going to lay down a list of epic cigars without Perdomo’s name in it? Please… We know a good cigar when we smoke it, and this is one hell of a stogie. It’s mild, but some call it medium (medium is kind of a stretch here) in terms of strength, but this is certainly a full-flavored powerhouse. Essentially, it’s a follow up to Perdomo’s Vintage 1991 series which was one of the top selling cigars in the history of the industry. And unlike most movie sequels, this cigar sequel lives up to the hype. Some of the best Nicaraguan tobaccos from 2002 are used in this bad boy, all topped off by Connecticut wrapper from the year 1992. I don’t even think Grunge was a music genre back then! Then again, what do I know? I was 4 in 1992, making these tobaccos nearly as old as me. The result is fairly non-conformist to the traditional Connecticut wrapped cigar with hints of cocoa and sweet spice coming through, among other flavors that all fight to hit your palate the hardest. Mix that veritable stew of flavors, along with a smoothness that only comes about through extensive aging, and you’ve got yourself a big winner.

So yes, my fellow full bodied, full strength cigar lovers out there, mild cigars can certainly send our palates on a roller coaster of flavor changes and complexity to the same extent as a full strength stick of dynamite. Only instead of getting our heads blown off by a rush of nicotine, we keep our cabeza right where it belongs between our shoulders. This allows us to make the smoke more about enjoying and identifying the complexity of different flavors throughout the cigar, rather than see how much nicotine we can handle. And to the mild smoker, if you’re looking to break into medium strength cigars, mild strength flavor bombs help ease the transition into stronger cigars by allowing your palate to get used to fuller bodied offerings. But no matter what you smoke, mild flavor bombs are probably the most underrated cigars on the market, and this reviewer will certainly pay more heed to the call of the mild.

And no, I won’t apologize for the lame wordplay in the last line.

Very nice review I actually like a mild cigar in the morning!

Enjoyed the review, I like a good mild, and mild-medium cigar in the morning with my coffee, especially a San Lotano Connecticut! Awesome cigar.

concise and informative. I just discovered the undercrown shade. It’s a wow to.

Just smoked the CLE. Put it out a half hour ago and still I’m thinking about how good it was. I’ve found my go to smoke. Thank you for leading me to it. Burned perfectly with a perfect draw. Picking up a few more tomorrow.

So, please let me get this straight. If I buy a cigar that is advertised as “full bodied” it means it is chock full of rich flavors but doesen’t necessarily mean that the cigar has potent nicotine content? What if I’m looking for both full bodied and full strength? I’ve never seen a cigar advertised with both adjectives, it’s either one or the other? Please don’t laugh! I’m sometimes a little slow on the uptake. But as a four to five cigars per day smoker (unbelievable expense), I really want to know this tidbit.

Read More
Cigar Buying Guides
On the hunt for the latest and greatest cigar releases? Check out this week's picks for our Top New Cigars at Famous, and get ready to fill your humidor...
Read More

The Benefits of Resting Premium Cigars