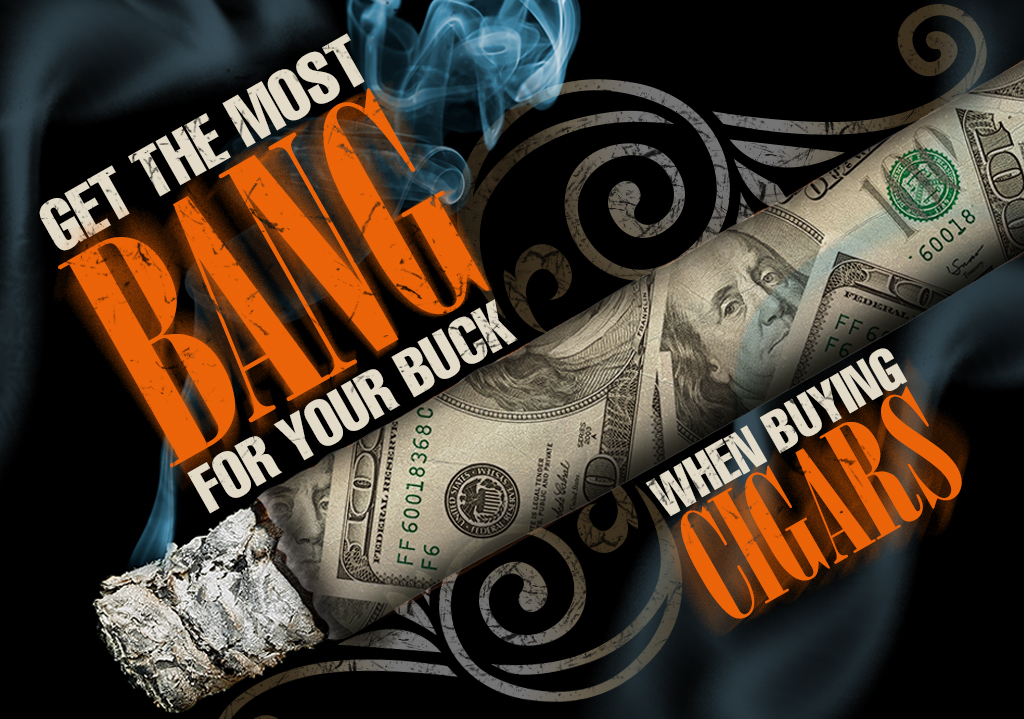 Get The Most Bang For Your Buck When Buying Cigars

We all do it. When buying cigars, we leaf through the catalog or dissect the website looking for a deal. Open emails that scream about savings of 50, 60, 70% or more on great cigars, then pore over the coupons to find out which deal saves the most cash while bringing home the most cigars. Inside all of us is a hardcore cigar value hunter – which, I assume, is why you’re here as well. But even the most budget-conscious among us is willing to drop a little extra coin now and again for a “good” cigar. But are we really just burning up money that could be better – or more smartly – spent?

Of course, you know this already – so before you type a nastygram in my direction about how you “smoke Gran Habano #5s and they’re so f*cking GREAT,” we actually put some research behind it, above and beyond the anecdotal evidence you may find in our customer reviews.

And for those of you who are about to fire off a diatribe about how “Padron cigars are worth it and the best goddamned thing in the world, you’re an idiot” well…you’re right, too. But only kind of, because…science.

If you’re still scratching your head saying, “but I thought every cigar is a good cigar…” – well, there are qualities you might be missing out on when it comes to those “special” smokes in your humidor. You know, the ones on the top shelf of your humidor that have been sitting there for six months, waiting for just the right opportunity to smoke it? Those.

As I said before, there are many among us who don’t mind treating ourselves to a higher end, “luxury class” smoke – and feel perfectly justified in dropping an extra 10 clams when the time comes. But if you’re relatively new to cigars, there’s a benefit to reading the work of those who came before you…people who write ratings. And I don’t mean Cigar Aficionado: those don’t count. They’re selling you a lifestyle, and that includes high-priced cigars that, many times, aren’t worth it. You’ll see what I mean shortly.

The key, in my opinion, is finding what you like – but rather than buying cigars by just taking a stab in the dark and hoping you find a smoke that fits, you have to devise a system to find your own smoking profile.

Start with Flavor and Complexity.

Even if you’re not sure how these terms work with regard to cigars, you’ll find out as you try more and more of them. What kind of flavor do you like out of your cigar? Well, now would be a good time to consult a flavor wheel – not only will it help you pick and choose what kind of flavors you like, but it will help you identify some of those essences you can’t quite put your finger on – and be able to more clearly identify them as your palate develops. I’m a big fan of the wheel that Cigar Inspector put out not too long ago (http://www.cigarinspector.com/cigars-101/cigar-flavor-components), which breaks down the tastes you’d find in a cigar into 8 families (herbs & spices, nuts, flowers) – and from there, drills down into some of the subtler nuances (different types of pepper, different kinds of plants or coffee). It really helps when trying to communicate a taste from your mouth to your brain to someone else. Complexity, on the other hand, is more along the lines of your senses picking up a mixture of multiple interrelated flavors going on at one time.

Move on to Strength.

Now that you know what kinds of flavors you like in a cigar, it’s time to start figuring out what other qualities you like in your smoke. That makes strength the next stop on this tour bus: mild, medium or full. You can fill in the blanks with mild-medium and medium-full, but for the sake of simplicity let’s stick with the big three. Milder cigars tend to have less nicotine content, and have a Connecticut wrapper. They’re smoother, and quite often might even be considered flowery or “cedary.” Medium bodied cigars will introduce the notes of pepper and spice, while heavily relying on some of the “other flavors” and nuts on the left side of the wheel. When we get to full strength and body, look to the right side of the wheel for big blasts of spice, pepper and earth, while taking on the stronger flavors from the coffee, nut and chocolate categories.

Explore the Country of Origin.

This has, lately, been the deciding factor when buying cigars. People getting all jacked up on this country or that country, and only exploring cigars within this particular frame. I argue, open your mind. Different countries tend to offer particular flavors and tastes – but not always. Especially when you’re exploring blends that consist of tobaccos from a variety of countries. So if we were to paint each country with a broad brush, the picture would look something like this:

Dominican Cigars:
One of the forums broke Dominican tobacco down nicely into two schools: full and mild body. Both are unique to Dominican cigars, with the fuller selections showing off black pepper, damp earth, and dried fruit. The more mellow Dominicans give up more raisin-like sweetness than Cubans, and are characterized by sensations of must and grass.

Nicaraguan Cigars:
Nicaraguan tobacco has a heavy spice and a lot of black pepper – and though it’s not as sweet as the tobacco from other countries, its sweetness lies more along the lines of dark chocolate, caramel and molasses. Think dark roasted coffee (another Nicaraguan export)…that fits its reputation for “strength” tobacco.

Honduran Cigars:
Many say Honduras has developed a reputation for very full-bodied tobacco – but often times, without the spice. Though still aromatic as the other countries, Honduran leaf is often nutty or toasty, like “crispy.”

Cuban Cigars:
Their tobacco is often described as having deep, rich, fruity and flowery flavors that are also quite aromatic. Earth is in there, as well as an occasional sweetness that is distinct – like sugar cane. You can also expect nut flavors, milk chocolate and a spiciness that is akin to white pepper

Now that you have an idea of what you can find in a “good” cigar, seek out a variety of cigars that fit the criteria you’ve created – then put each one to the test, and then get into the ratings.

So let’s do the math.
[cigarratinggraph] First off, you’ll see that the sweet spot on price for the top 99 cigars in the sample was between 10 and 20 bucks. But what else does this graph tell me? The most expensive cigars are not always the highest rated. The highest rated are not always expensive. “How?” you may be wondering. Click on the little circles above and I’ll show you.

See, we sampled 99 cigar reviews and ratings from the popular cigar discussion forum and review site Puff.com, and using their community-sourced material, compiled this graph to show that – even though a cigar may be expensive – it’s not always high in the numbers. Look at the most expensive cigar on the list, the Cuban Partagas Serie D No. 4: ringing up at a whopping $37 and change, it only rates a 22. Compare that with the 34-rated La Tradicion Cubana Churchill, which can be had for less than 5 bucks. So does that mean Cubans aren’t as good? No, because there are more than a few highly-rated Cuban cigars in the pricing sweet spot that rate nicely; but there are also a huge number of Nicaraguans that can fit a different smoker’s profile for less money, and still rate strong against the Cubans – which is great for you, if you decide it’s Nicaraguan cigars you’re after.

Here are just a few of the other takeaways we found, at a glance:

The Honduran cigars in the poll rated fair, but were very inexpensive…that’s pretty cost-effective, if you like what Honduras – broadly – has to offer.

Same for Dominicans – while the cigar community has been gravitating towards Nicaraguans, Dominicans are still showing strong, and at a seemingly lower price point than usual, meaning decent bang for your buck.

Two American-made cigars – the La Tradicion and a Sabor Cubano – showed up in the top 25 highest rated – average price point? Under $5 a stick.

So here’s the moral of this story: figure out what you like, then funnel it down to the key qualities you prefer. You’ll make better decisions when buying cigars, and you’ll enjoy what you smoke even more knowing you get a great value. And don’t get caught up in the where-it’s-made hype – there are great values to be had no matter what country of origin you prefer most.

Reading Time: 4 minutes Want to get the scoop on the latest cigar offerings at Famous Smoke Shop? You’ve come to the right place! Click to view the current rundown.