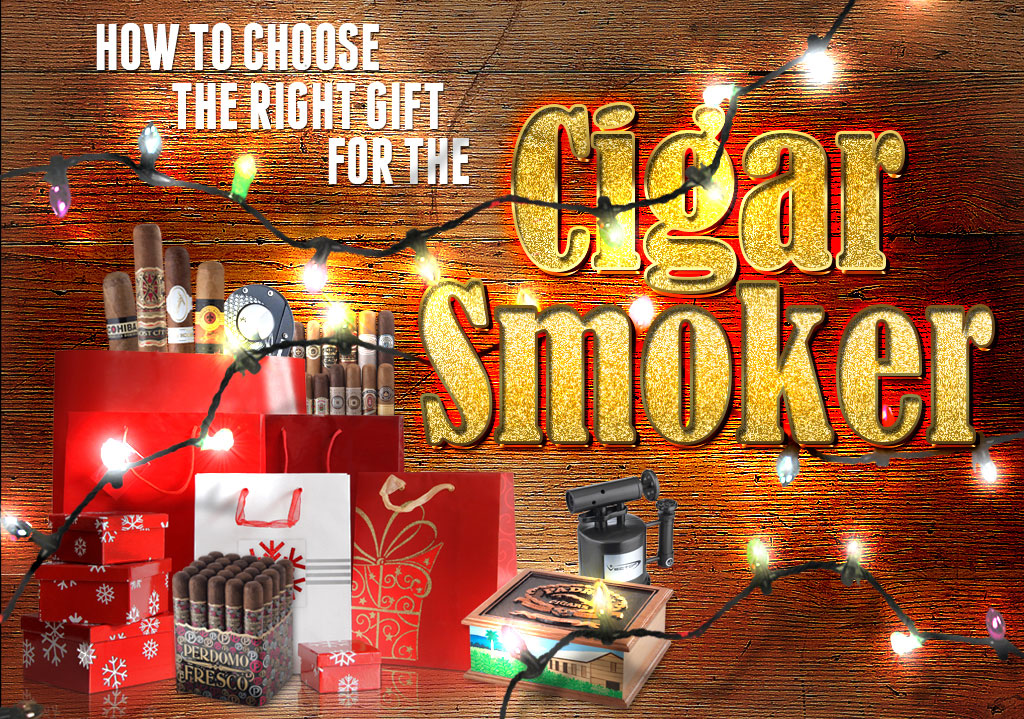 How to Choose the Right Gifts for Cigar Smokers

Choosing the right gift for someone is never truly easy; I’d argue that Ph.D.-level mathematicians have an easier time making a go of writing abstract geometry theses, than the experience we’ve all faced when trying to buy great gifts for cigar smokers. And make that twice as hard when you’re not quite sure what your cigar smoking pal enjoys. Triple the challenge if you plan to buy the gift from an online cigar store, because it’s hard to “take it for a test drive” – you’re relying on personal experience, or what you’ve heard or read online. So, maybe – just maybe – it’s a good time to stereotype your giftee, and choose the right cigars by matching them to his or her personality. Here are a few that you may know…

Everyone knows El Cheapo: He’s the guy that buys wine by the box, his clothes only when there’s a “Buy 1 Get 3 Free” sale, and crows about how Wal-Mart’s prices are “still too damn high.” When it comes to cigars, he only smokes bundle brands, and raves about how “that finger-burning goodness only cost me 87¢ a stick!”

You may be tempted to play right into his wheelhouse; don’t. Before you decide to buy cheap cigars at a mere 20 bucks a bunch, remember that there are plenty of bundle cigars for sale that actually offer an opportunity for your pal to step it up in the quality game.  Do El Cheapo a favor and gift a treat he may not ordinarily buy…especially bundles with well-respected brand names such as Perdomo Fresco, Rocky Patel Factory Selects, or even Gran Habano. Not only will you save a few bucks, but you can buy with confidence. Click on any of them to see more…

Certainly, you’ve run into this guy: he drinks Starbucks coffee exclusively (everything else is crap), only wears shirts with the manufacturer’s company emblem on the pocket (everyone else’s is crap), plus he’s always washing his BMW crossover in the driveway; you know, the one with the college decal on the back windshield and a plethora of bumper stickers touting his awesomeness. The Showoff also leaves the band on his cigar as long as possible just to make sure everyone around him has seen it. But he’s still a friend, and he’s on your gift list.

Obviously, this type of person likes to advertise just about everything they use. Alrighty then…show the Showoff you can play his game, and score him something like a XiKAR Room 101 X11 Bling Tastic cutter, or the Perdomo Lotus cutter with the Perdomo Cigars logo on it.

A fancy humidor would certainly be in order. Since the Showoff wants – no, demands – that you know what cigars he smokes, the Countertop Display 150 Count Humidor has a top-to-bottom glass front, making it almost impossible to miss out on seeing his precious primos. Further up the scale, the Showoff would probably love to have the Padrón 1926 40th Anniversary Hand-carved Cedar Chest humidor. (Come to think of it, if you have the means, you might as well buy it for yourself – it’s a nice piece.) Click one to learn more:

If you want to go the cigars route, go with the big guns like Opus X, Davidoff, Montecristo, and Cohiba cigars (click one to learn more):

If this guy isn’t one of your friends, he’s probably a friend-of-a-friend. You know, that guy who is so pumped about his favorite team that his closet is full of T-shirts and hoodies with the logo on them. He’s got an alphabetized CD collection that could fill The Smithsonian, including his favorite bands in every recorded format – including 8-Tracks. His cigar collection is a fully-stocked 3,000 ct. cabinet humidor with the brands separated by manufacturer and country of origin, plus, he keeps all of his cigar bands in a big 3-ring binder…with notes.

Remember who we’re talking about here….this is the guy who made it his mission to have checked off all 360 craft beers on the local brew pub menu. Because he must get his hands on one of everything and try it, the Fanatic would love getting cigar samplers or cigar lighters. (Chances are he has a collection of them, too, including every Zippo lighter ever made.) The Vector Tri Pump Triple Flame cigar lighter would be right up his alley. Or, if you want to get him something similar for a lot less money, go for the Blazer Big Buddy Tabletop torch lighter.

As for cigar samplers, if he likes a particular brand, strength, or wrapper leaf, give him a “Best Of” cigar sampler. These packs include the best cigars from one or more of the aforementioned categories. Since the Fanatic is drawn towards large numbers of things, you may want to buy him a giant-sized sampler with anywhere from 15 to 40 cigars. Click any of these to buy them, or learn more:

A few years ago, when Cigar Advisor did a poll asking if cigar smokers were planning on giving cigars as gifts, the majority said “No.” I was taken aback by this response since I thought one of the tenets of BOTL’s was to share, and wouldn’t the Holiday season be the perfect time to thank those who’ve shared cigars with you during the year? I hope, since then, the majority has shrunk considerably and most of us will be paying it forward. If you plan on doing so, now you’ve got some ideas to play with.

[…] hand rolled cigars in Spanish cedar boxes. These were often given out to his banking clients as gifts and helped promote the […]

Reading Time: 4 minutes New to You: a sampling of the Top New Limited Edition cigars to hit our humidors…and with so many new cigars being added just about every day, we’ve put them all in one place – Click to view our list of Top New Cigars!

The Holiday Cigar: It’s How I Survive Christmas