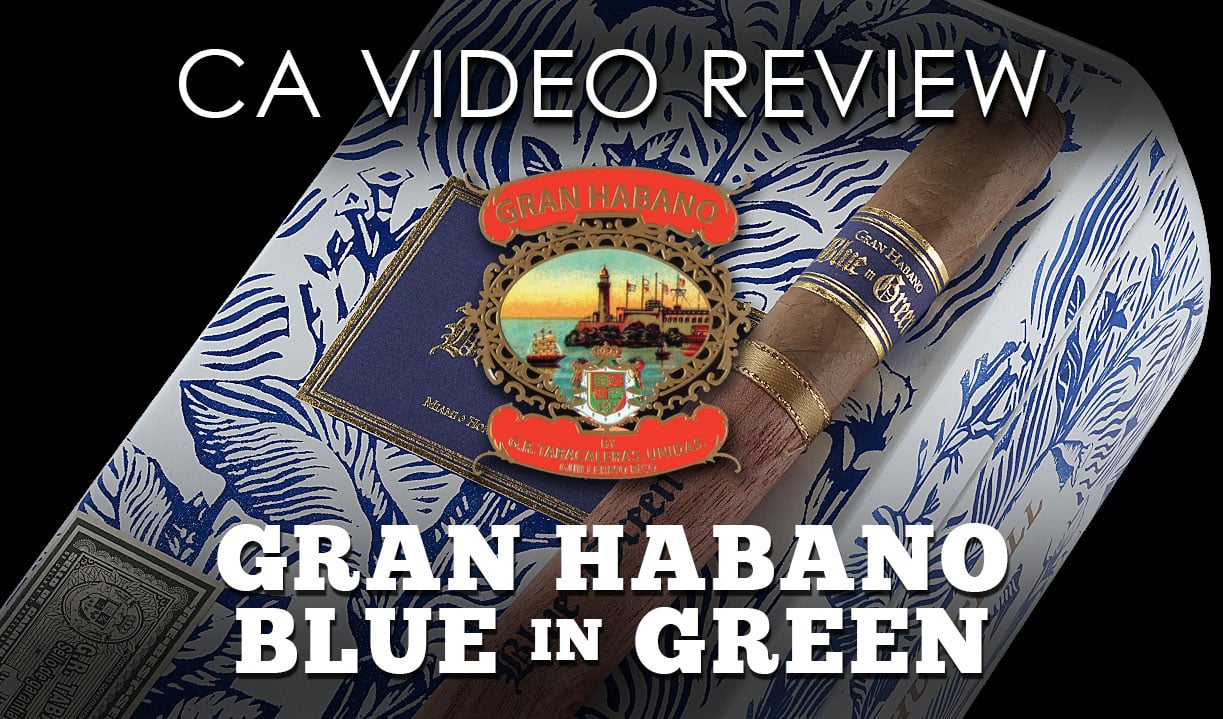 The Gran Habano Blue In Green Cigars Back Story

If there’s one cigar brand that deserves to be in the hands of a lot more cigar smokers, it’s Gran Habano. Named for a Miles Davis composition, Blue In Green – from the best-selling jazz record of all time, his classic Kind of Blue album – Gran Habano founder, George Rico, calls this the “Blue In Green Project.” The cigars – a medium-bodied version of a Gran Habano classic blend – have a core of the finest, vintage Nicaraguan tobaccos rolled in a blonde, pristine U.S. Connecticut Shade wrapper. According to Mr. Rico, Blue In Green is a cigar which “demonstrates that a mild to medium-bodied cigar does not have to be bland.” Rolled in three sizes, Robusto (5″ x 52), Gran Robusto (6″ x 54), and Churchill (7″ x 48), Blue In Green is presented in boxes of 20 cigars.

Summary: Not unlike Davis’s jazz composition, the Gran Habano Blue In Green Churchill starts off cool and easy, then works in plenty of nice little flourishes along the way for a mostly clean, bright, and citrusy smoke. The cigar starts out very mellow with a creamy, sweet, and tangy character. After the first inch notes of hazelnut and oak enter the well-balanced mix with a subtle hint of white pepper on the long finish. The lighter-tasting U.S. Connecticut wrapper keeps everything in balance, too.

Farther along, the cigar shifts to a more medium-bodied smoke. The citrusy tanginess remains along with the oak and sweet spice. More defined notes of hazelnuts enter the fray along with nutmeg and some earthiness, while the entire mix remains well-balanced.

The latter stage is more robust without pushing too far into the full-bodied range, and the smoke continues to be well-rounded and balanced. Oak and earth flavors become darker and more clearly defined as the sweet spice moves into the wings, and the citrusy tang hangs on. The final inches really ramp up the earthiness with some charred oak notes, yet the smoke maintains its balance.

Some of the sweetness could be reduced by pairing it with a more peaty single malt scotch, or a lighter rum may do the trick, but I thought it was great with my dark roast coffee, which had very little sugar and cream.

Suffice it to say. . .I found this cigar extremely satisfying. And although it’s made to appeal to smokers of every experience, the Blue In Green would also make a smart choice for newer cigar smokers ready to move up to more complex cigars without being overpowered.

Construction and Overall Appearance: A long, reddish brown-hued cigar with some protruding veins and consistent coloring. Three turns on the cap.
Pre-light flavor (cold draw): Sweet aroma and earthy, grassy flavors.
First few puffs: The first few puffs are sweet with hints of citrus.
Retrohale: Creamy retro with slight pepper, notes of leather, and no burn.
Base flavors: Earthy, citrusy, and leathery creaminess, with a sweetness that evaporates after the first third.
Aroma: Sweet aroma.
Burn / Ash Quality: Great construction with a long-held ash and thin burn line.
Balance of flavors: Creamy, leathery, and earthy, with a sweetness in the beginning.

Summary: Gran Habano Blue in Green was produced as a hat tip to George Rico’s favorite Miles Davis song, one that shares its namesake. Miles could play a single note that exuded more feeling than some songs offer in their entirety, so I was curious to see how Blue in Green would stack up.

I smoked a total of three cigars for our review, and I’d be lying if I said I was head over heels about the first two. For the third cigar, I tried it with a clean palate – and the difference that made was considerable. What I was sure would be another afterthought came alive, and with my fresh taste buds, subtle and creamy nuances of citrus and sweetness that were previously masked came to light. Developing into a more earthy and leathery affair as I moved on to the second third, the creaminess remained and warm pinches of pepper on the retrohale emerged. The final third was similar to the second, but it mellowed back again slightly for the finale.

My verdict, too, is that it’s a great bridge for newer smokers who are on the fence about taking the plunge into medium-bodied cigars. Without being too complex, or too strong, Blue in Green is a natural stepping stone – and as it is Gran Habano, it has an affordable price point (under $7 to start, at the time we reviewed it), meaning it’s priced to be a reasonable daily smoke.

Summary: A new cigar from Gran Habano, with some interesting flavors I’ve only ever found in a handful of cigars…the pre-light is earthy, a bit flinty; then comes a muted sweetness, like a dull citrusy sensation – think lime zest or dried fruit. When you let go of the smoke, it leaves a super-long finish with a tiny bit of spice. Most of these flavors burn off by the end of the first third, where some of the mineral-ish taste comes back, with earth, wood and a building spiciness. This profile stays medium-bodied and very consistent until it’s time to call it quits.

This Blue in Green grew on me: the first one I ever smoked was during our Facebook live show, and I was like, “Ok…some interesting flavors, not wildly complex. Pretty straightforward.” This time, however, I was able to pay closer attention to it – and in return, picked up on more of this Gran Habano’s nuances. That’s why you can’t judge a cigar after just one smoke; always give a cigar a second or third chance if you can.

Here’s an interesting way to enjoy this cigar: I think you should smoke it, but resist the temptation to pair it with anything for the first third – water or coffee at most. When you hit 1/3-way, then uncork something with some bite, like 2 fingers of Knob Creek, to bring it across the finish line. And that’s going to take a while, as the Blue in Green Churchill is a very slow-smoking cigar – 2 hours-plus, for me. But I think that if you do it any other way, you’ll risk upsetting this cigar’s delicate balance.

Summary: I find this to be a very interesting new release from Gran Habano featuring something new and something old for the brand.  The new: It’s an ultra-creamy cigar with a very defined sweetness. The old: That wonderfully familiar taste reminiscent of the Corojo #5 (one of my go-to sticks and a longtime fave of mine).

While the cigar is classified as medium in body, I’d say it’s mellow to medium in strength, but pleasantly full in flavor. Early on in the first third you get hit with a sweet and toasty creaminess along with a tangy citrus component. But you also get that delicious smack of Corojo on the palate (even though I can’t confirm it is Corojo, it sure as hell tastes like it.) But then it shifts things up as you reach the halfway point, as an earthiness sets in, but that Corojo flavor still remains. And the construction is simply excellent as it burns slow while forming a crisp ash on the foot.

For me, this is a great early to mid-day cigar and I really like it a lot. Tastes great, burns great, and comes in at a nice price. Gran Habano really did right with this one. A definite thumbs-up, I say.

Very true, Gran Habano is a brand that needs more love than it gets. Blue in Green looks like one to try. Another one is the Black Dhalia. My son’s shop just got these in and they are excellent. More love to Gran Habano I say. Thanks for the clip and article.