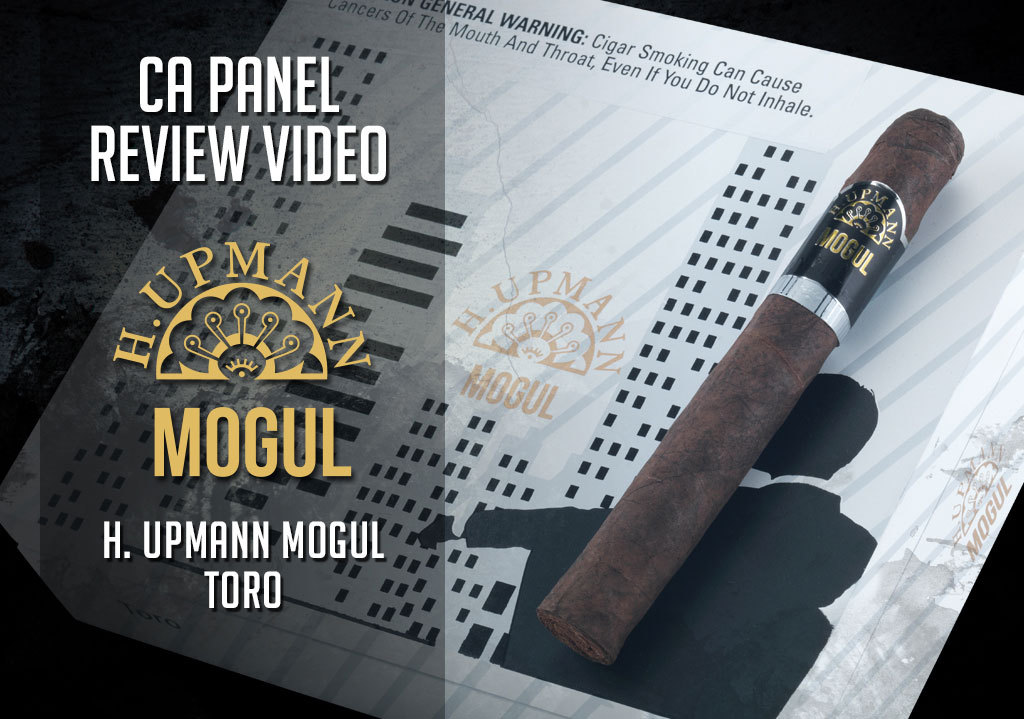 Not your average Upmann, for sure: the Mogul is a pretty radical departure from the old-school H. Upmanns you’ve smoked in the past, such as the Vintage Cameroon or the 1844 Reserve. With Ligero in the long filler mix and a Connecticut Broadleaf that smokes with dark and sturdy flavors, this cigar now stands as the most potent in the H. Upmann cigar lineup. It’s a heavy-handed, but not overpowering smoke; we’ll dig into the tasting notes and experiences below.

The H. Upmann Mogul selection represents the next phase in the evolution of this classic Cuban heritage brand to meet the requirements of today’s more demanding cigar smoker. Made exclusively for Famous Smoke Shop, the Mogul offers a medium to medium-full smoke at a very affordable price. H. Upmann Mogul is offered in boxes of 20 cigars, while the Toro, which we reviewed, is also offered in vacuum-sealed, refillable HumiJars of 20 cigars and economical 5-packs.

See what we thought of this cigar in the video below – and as always, want to hear your feedback.

Presentation: Box of 20 cigars and 5-Packs (At press time, Toro 5-packs only.)

Draw: A little on the tight side.

Toasting & Light: Sweet cedar and pepper with an oaky aftertaste.

Base flavors: Wood, both cedar and oak, leather, black pepper and a strong sweetness that is the key tasting sensation.

Retrohale: Sweet and toasty, a slight herbal note and nip of black pepper. Second retrohale was pepper and toast.

Burn / Ash Quality: Very tight and white – it doesn’t want to drop! (It eventually dropped quite hard in my lap).

Balance of flavors: Mogul leaned toward the sweet, woody, and earthy side.

Consistency: Some tightness in the baseline cigar but no other issues from henceforward.

Upmann Mogul is a modern twist on a classic brand and it certainly has a price point to attract new smokers to the brand – from its construction down to the flavors, this cigar is an absolute steal for the price. While the Connecticut Broadleaf wrapper may not be a whole lot to look at, it did bring a multitude of sweet and woody flavors. I had some tightness on the baseline, but I must admit the construction was flawless: perfect burn, tight ash, easy draw, and no issues to note.

The pre-light draw brought dark roasted coffee, a deep earth, and a very woody cedar to my palate. Upon toasting, this cigar chugged out tons of smoke. The initial flavors reminded me of a woody cedar-sweetness with leather and an oak-like flavor on the aftertaste. While the second third was more or less the same as the first, the final third brought some more intensity to the base flavors and the sweetness toned down in way of the more woody, earthy and leathery notes. Both retrohales differed greatly between the second third and final third – the former being very sweet with a nice toast-like quality and an herbal note while the former was very peppery. Mogul was right on keel as a middle-of-the-road, medium bodied cigar; and while the flavors did intensify toward the end it was never overpowering. I would recommend Mogul to a new smoker or anyone trying to familiarize themselves with the H. Upmann brand family.

Construction and Overall Appearance: Very rustic-looking, but don’t judge this book by its cover. The Broadleaf wrapper may be a bit bumpy and toothy, but the cigar is well-made and completed with a triple seam cap. The rolling is also excellent. I found no soft spots, plus, the cigar has a nice weight and feel to it.

Retrohale: Smooth with a hint of pepper and citrus.

Burn / Ash Quality: Excellent. No burn or relight issues. Ash is dark grey and quite firm.

The H. Upmann Mogul Toro starts out smooth and sweet accompanied by notes of earth and cedar. During the early stages the smoke was medium-bodied and burned well with a firm grey ash that later resulted in a nicely-shaped cone. At times, a note of pepper revealed itself, but the cigar remained mostly sweet and woody with some added spice and a sweet, pleasant aroma. In the middle third notes of coffee and citrus snuck-in, but they were very subtle. In the last stage, the smoke was more medium-full in body and most, but not all, of the sweetness was pushed aside by earthier notes and chary wood flavors.

To the less experienced, the Mogul might come-off simply as a straightforward smoke with some very pleasing flavors. But to the experienced smoker who’s paying more attention, they will pick up many more flavors residing within this blend, including coffee bean and citrus flavors. That said, you really can’t miss with this cigar, which can be enjoyed either after dinner or in the evening with your favorite pairing, and will prove just as pleasing on the golf course or relaxing in the backyard hammock.

Suffice it to say, the H. Upmann Mogul is another impressive offering from one of the world’s great brands in a cigar that’s accessible to practically every cigar smoker, even those who are relatively new to smoking premium cigars.

H. Upmann Mogul will hold up well as an after-a-hearty-dinner cigar, and will pair well with a craft beer or a good whiskey; a no-brainer to match with coffee, too.

Construction and Overall Appearance: An uber-rustic CT Broadleaf wrapper here, not so much toothy but bumpy and veiny with a bit of sheen.

Draw: A little tight on both samples; proved not to be an issue, however.

Pre-light flavor: A slight hint of molasses and hay.

Base flavors: I counted a bunch; we’ll get to them below.

Aroma: Meaty, savory with a little char in the air.

Burn / Ash Quality: Light grey, held on nicely for the most part.

Balance of flavors: Progressing through the flavors, the H Upmann Mogul picks one predominant flavor at a time and just goes with it.

Consistency: From cigar to cigar, for sure. First half is pretty complex, a little tangy – after that, it tames down, becoming more smooth.

Do you know what a pomander is?

It’s an old school Christmas decoration, where you take an orange and stud the whole thing with cloves. Very Farmer’s Almanac-ish type of thing – and that kind of spicy-fruity sensation (albeit less intense; a pomander is pretty strong) is how this Upmann Mogul starts out.

Then, it’s a series of dark, like-minded flavors that start parading through the smoke: orange zest, caramel, dark coffee. Salt comes in, as does a leather taste at about an inch with some dry spice. Then earth, and a toasty feeling that reminded me of charred oak.  Onwards to bitter chocolate, like baker’s cocoa, then some pepper. It’s almost like the H. Upmann Mogul follows a progression, getting bitier in flavor, and a little bitter towards the end. (The flavors I highlighted are the ones that come through much bolder and more noticeable than the others, which you might even miss unless you’re really paying attention to the transitions in this cigar.) Throughout, the smoke is thick and heavy on the palate.

Upmann is always known for being so smooth, so refined; think the Vintage Cameroon or the H. Upmann 1844 Reserve. Even the Sun Grown is mellower than this H. Upmann Mogul, a very sturdy smoke. I’d say it’s a no-brainer coffee pairing.

Moral of the story: if you set your mind to it and pay rapt attention to this Upmann Mogul, you’ll likely find some of the interesting nuances like I mentioned. Or, if you’d rather set it and forget it, you’ll still be rewarded with a beefy, almost-full-bodied Maduro that has thick smoke, dark flavors and a little bite.

First off, I love Connecticut Broadleaf Maduro-wrapped cigars. Hey, they’re not gonna be the prettiest girl at the dance but they are definitely going to rock in the flavor department. And this particular wrapper immediately hits your taste buds with a really nice natural sweetness. It’s thick, toothy and will hold up amazing well while on the golf course or manning the barbecue.

The inner blend features some spicy Nicaraguan, a bit of Peruvian ligero to give it its peppery kick, and some Dominican leaf to smooth it all out nicely. The flavor profile features some very distinct tastes. While not overly complex, those flavors stand out, like sweet wood, black licorice, black pepper, spice and a touch of citrus on the palate. It has a nice full draw and the aroma is a bit charry, but pleasant. And I got a solid ash that held up about an inch and a quarter long.

This is definitely not your typical H. Upmann as far as the profile goes; it’s a beefy smoke, but not overpowering by any means. You can smoke this anytime. It will hold up well as an after-a-hearty-dinner cigar, and will pair well with a craft beer or a good whiskey.

So, if you want a cigar that’ll give some real pleasure to the palate and not strip your wallet of dead president portraits, The H. Upmann Mogul is a cigar you really want to fire up and enjoy.