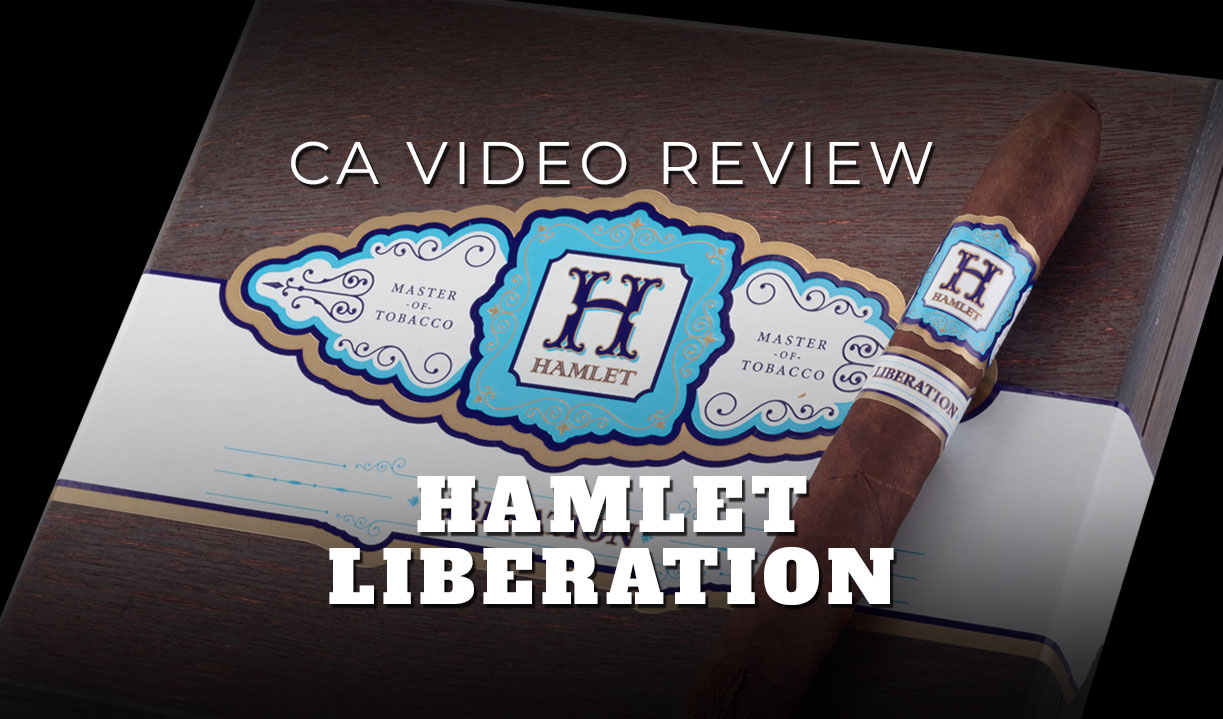 The Hamlet Liberation Back Story

Having already received a “91” from Cigar Snob magazine Hamlet Paredes’s third cigar, Hamlet Liberation, is unique in several ways. It starts with a quote from Rocky Patel Cigars that states: “This world-renowned cigar roller chose to liberate himself from the norm and rolled something completely different.”

Presented in boxes of 10 cigars, Hamlet Liberation is a single shape, one-off cigar rolled to over six inches with an extra-wide ring gauge, an unfinished shaggy foot, and a tapered head. Those characteristics alone, make this cigar a true standout.

“At all my events, I roll all my cigars free hand,” said Paredes. “No molds. So for this new brand, I wanted to create something different, something liberating. Naturally, we decided to call it Liberation.” 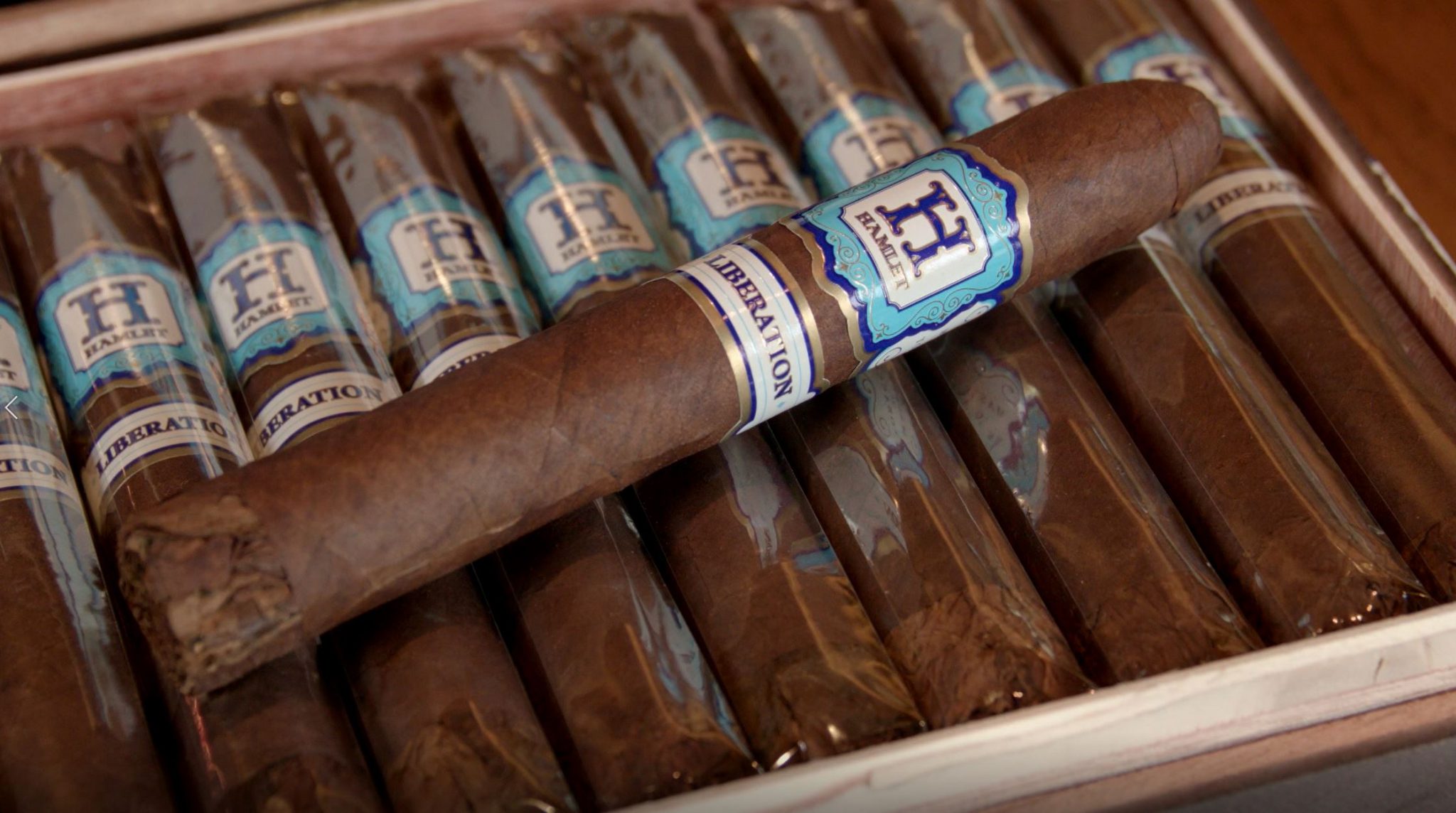 Interestingly enough, the cigar has a bit of a rustic quality that makes it look almost like a freshly handrolled cigar you might buy at a small cigar shop with a roller on staff. Yet, there’s much more to this cigar than its appearance.

For the Liberation blend, Hamlet selected a rich-tasting Ecuadorian Habano wrapper that envelops a blend of Nicaraguan binder and Honduran and Nicaraguan fillers.

Born and raised in Havana, Cuba, Hamlet Paredes has spent most of his adult life making premium cigars. A good portion of his 25 years in the industry was spent working at the Partagas cigar factory in Havana, Cuba. It was there that he mastered the art of “free hand,” blending and rolling cigars without molds or presses. His skills took him to worldwide acclaim, and in 2015, he emigrated to the United States where he was immediately hired by Rocky Patel Premium Cigars. Moreover, with three “Hamlet” releases now on the market, Hamlet Paredes has clearly distinguished himself as a master blender with a bright future.

For more background information, you can watch a video on Hamlet Liberation cigars here.

Construction and Overall Appearance: A big cigar. Solidly built with no soft spots, and heavy in the hand. The tapered head features a triple cap, while the foot is left shaggy. Wrapper has an even, milk-chocolate color with some veinage.
Draw (airflow): Very good.
Pre-light flavor (cold draw): Leathery and nutty.
First few puffs: Smooth, creamy, and mostly earthy with a dash of light pepper.
Retrohale: Creamy with a hint of graham cracker and coffee.
Base flavors: Earth, wood, sweet spice, tannin tanginess, graham cracker, roasted coffee.
Aroma: Floral.
Burn / Ash Quality: The cigar burns very evenly with a razor thin carbon ring. The ash has good staying power, and the nugget stays together even when tapped into the ashtray.
Balance of flavors: Very good.

Summary: I decided to go with a V-cut for the baseline sample, but it seemed to be keeping some of the flavors from getting through, so I recut with a guillotine, which opened it up immediately. (I also used a guillotine on the cigar for the video.) Some nice floral notes appear first, accompanied by a musty earthiness, some woodiness, a subtle note of sweet spice, roasted nuts, and a tannin-like tanginess. More sweetness enters the mix at the end of the first act.

Some graham cracker notes get the second act off to an even more pleasurable start, melding nicely with the sweet spice and woody notes. Some roasted coffee teases its way into the mix while the cigar remains well-balanced and smooth on the palate. Even the retrohale flows with a creamy mix of graham cracker and coffee.

Moving into the final stage, the cigar takes a turn toward more spice and earth, while some woodiness, and graham cracker hang loosely in the balance. At the nub, some flintiness arrived, and that’s when I parted ways with the cigar, leaving less than two inches. I say that’s pretty good for a cigar of this size.

Overall, the Hamlet Liberation is an extremely well-made cigar with a solid feel in the hand, well-balanced flavors, some unique complexity, and lots of dense, creamy smoke. This cigar could pair with just about any drink, and can be enjoyed any time of day by cigar smokers of every experience. 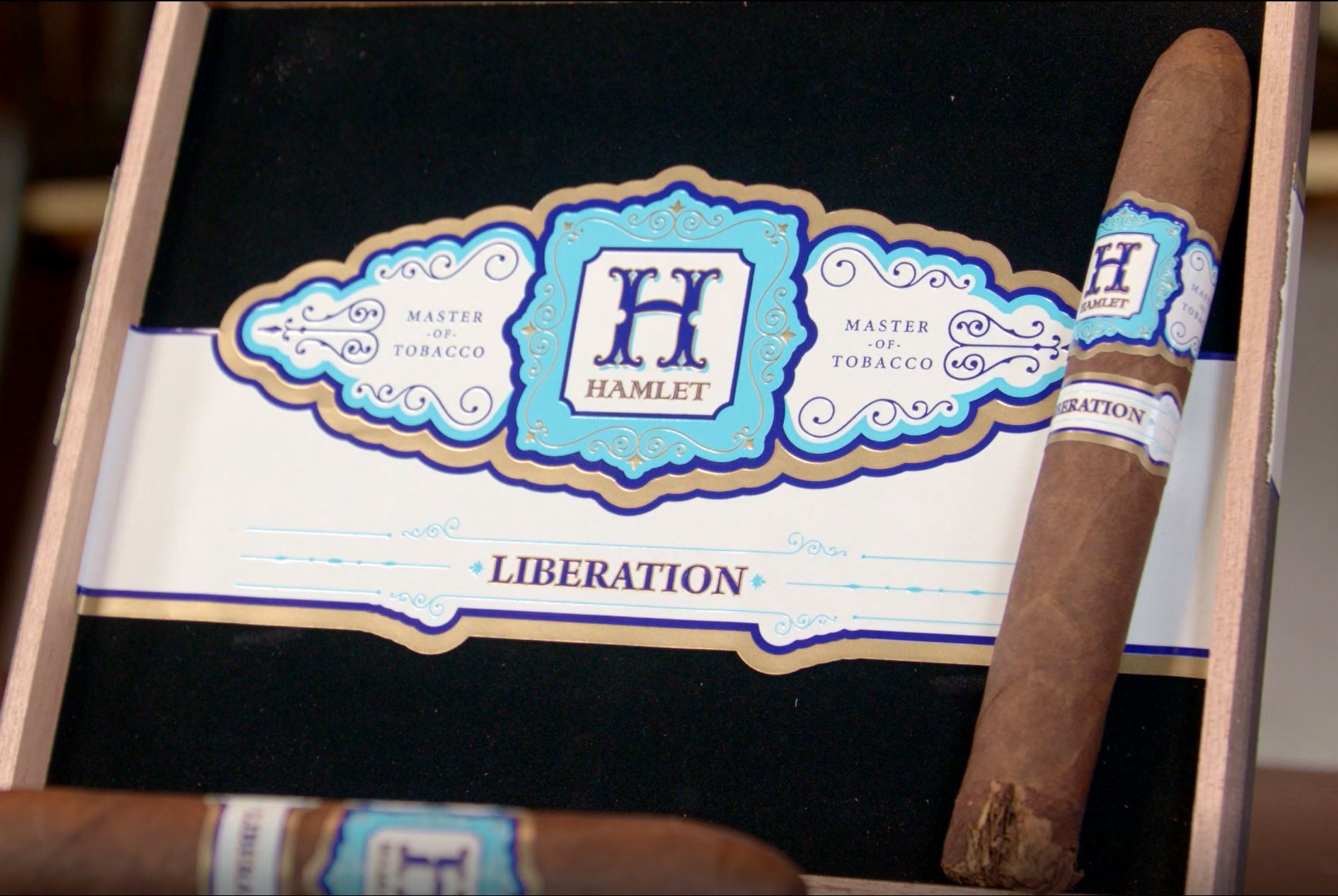 Construction: Very well made – wrapper has an even, weathered bronze coloring, pressed veins…not overly oily, but a neat shaggy foot.
Draw: Very nice.
Pre-light flavor: Fermented tobacco, tea, earth.
Toasting & Light: It’s just the taste of binder and filler – earthy, toasty floral and coffee; once the wrapper kicks in, spice and coffee bean arrive as a whole other layer of flavor.
Base flavors: Light spice, coffee, earth.
Retrohale: Pepper, wood and slightly sweet – like graham cracker.
Aroma: Sweet; mostly floral, a bit of cedar.
Burn & Ash Quality: Nice burn, given the shaggy foot. Ash is a slight off-white, mostly tight and holds well up to about an inch.
Balance of flavors: Nice bit of complexity, all the flavors are in tune.

Summary: As previously discussed, Hamlet Parades said he wanted to do “something liberating” for a new project; this is the result, and how this cigar got its name. The Habano wrapper is not overly oily, which is ok – not all cigars need to have an oily complexion for them to be good, as some might lead you to believe.

Beautiful color, well-crafted cap – and here’s a tip: if you use a Perfect Cutter (or similar style cutter with a built-in backstop), cut it twice. The second cut opens just enough airflow that you get a little resistance, but still a small enough opening that it channels the flavor nicely onto your palate.

Hamlet has said, “The shaggy foot is meant to be smoked. It provides a nice introduction to the cigar, then everything changes when you reach the wrapper.” And that shaggy foot is the most noticeable thing about Liberation: it means there’s no wrapper for the bottom 1/2”, just exposed binder and fillers. So from the start, you’re just tasting that part of the blend. And they burn together very evenly – so much so that, when the burn line arrives at the wrapper, it transitions without skipping a beat. Which means the binder is doing its job, and another sign of a really well-made smoke.

Flavor-wise, the shaggy foot smokes subtle – when the wrapper kicks in, so does some intensity (as intended): there’s spice and dark-roasted coffee added to the mix. That heady, peppery taste eventually relaxes, and Hamlet gets sweet and a little creamy with a fruity tang.

Later, it’s woody and nutty, with enough spice to leave a tingle on the lips; there’s also a dry sweetness that I can’t figure out if it’s raisin or powdered sugar. Wood and spice take back over toward the end.

The experience here is a cigar with a bit of complexity that smokes smooth throughout; medium-bodied, incredible aroma, and plenty of smoke. To give it a home in the RP lineup, I’d say split the middle: the Vintages, The Edge and RP Decade are on one side, and the 15th and 20th Anniversaries, the RP Platinum and the Rocky Patel Royale – the super-premiums, where the flavors are darker, richer and more “serious” (maybe I should say “sophisticated”), are on the other. Rocky Patel’s Hamlet Liberation is tastefully done; if you’re not sure you’ll like it, I might say that if you find The Edge a little too “raw” – this is one I think you’ll enjoy. 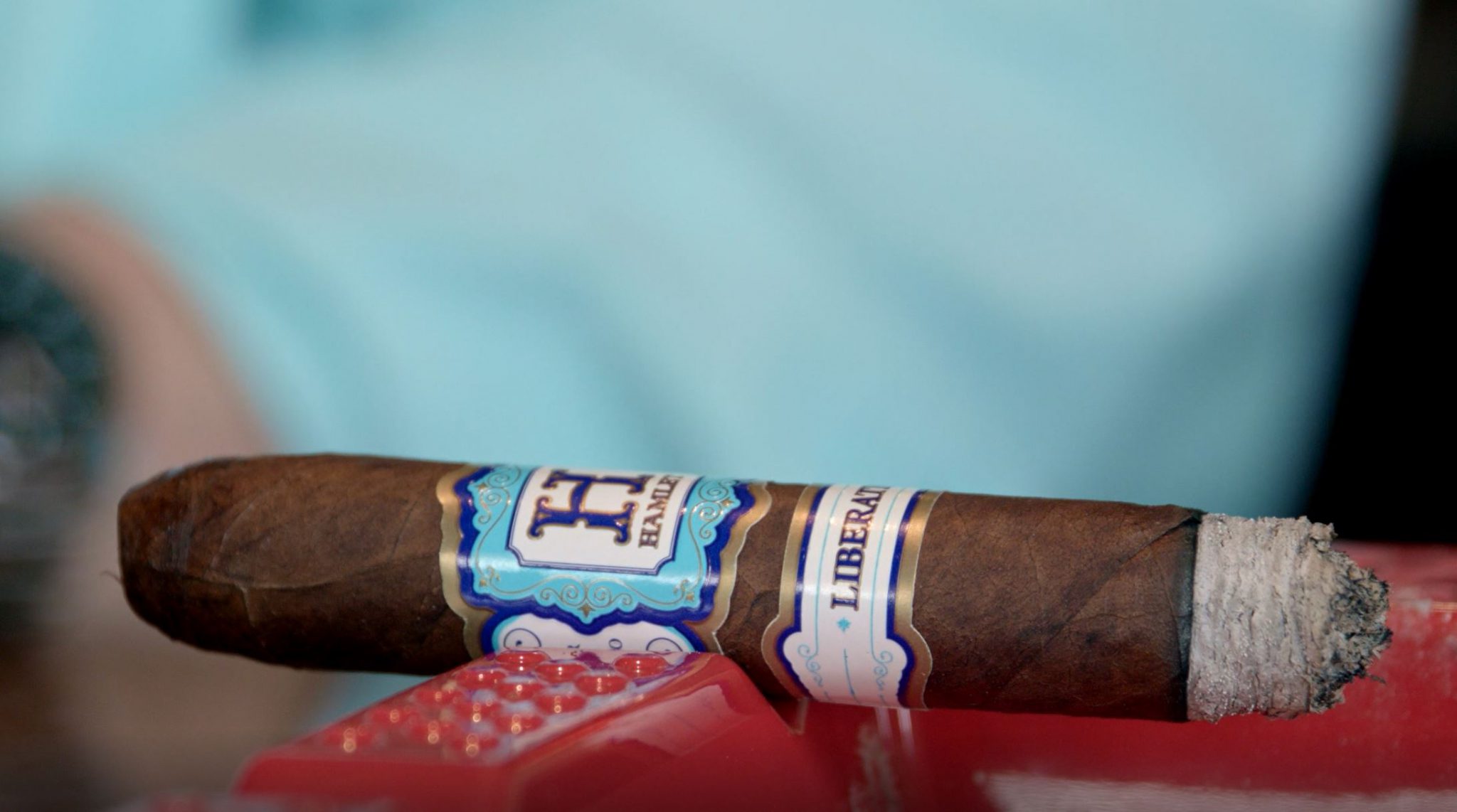 Summary: This is a very interesting and flavorful new cigar from Rocky Patel, created by Hamlet Parades. It’s available in one size only, a size that was created to exude this flavor profile only.

The first thing you’ll notice visibly on this brawny, medium to full-bodied stick is the shaggy foot, which creates an earthy and rustic beginning before the wrapper starts burning. But once the wrapper begins to burn, a nice sweet spice takes hold and will carry you much of the way through. You’ll get notes of coffee and a kind of red wine tannin flavor on the palate, but there’s also a wonderful floral-like sweetness there that I generally only get from a finer aged Cuban-made smoke. And, as far as construction goes, this is truly a well-made gem that burns so well, producing a solid ash and a whole lotta smoke that billows from the foot.

I personally think this is a terrific offering from Rocky, and noticeably different than other cigars he has produced. I’m definitely picking up more of them to have on hand in the humidor.