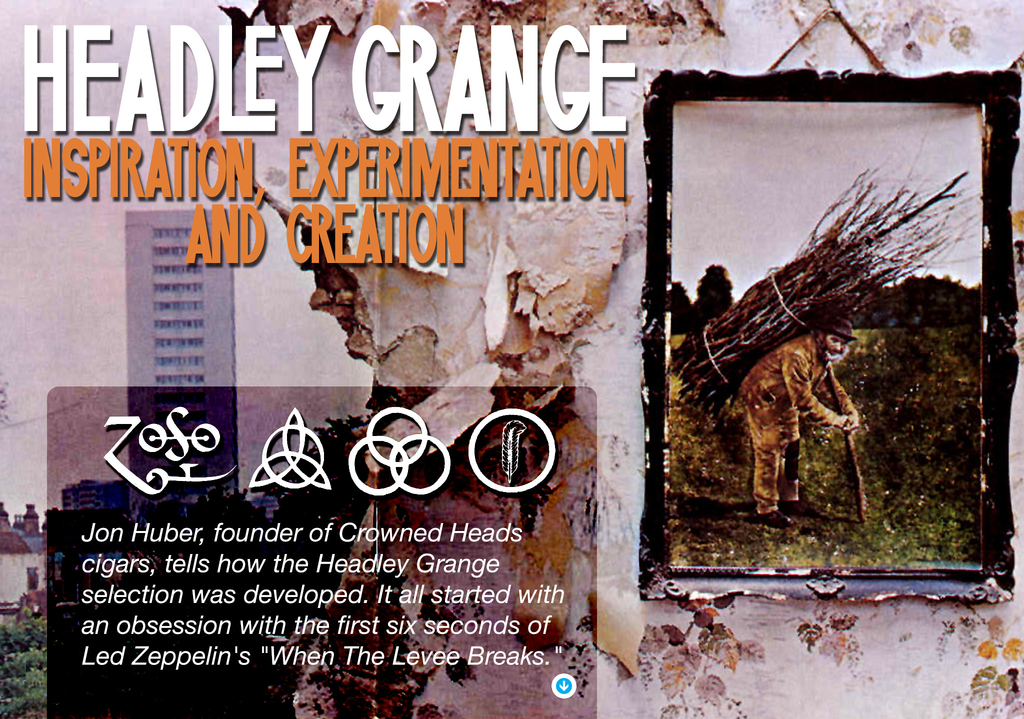 It was October of 2011, and we were a month away from shipping the first boxes of Crowned Heads’ inaugural release, Four Kicks. Despite the fact that Four Kicks had yet to make it to a retailer’s shelf, I felt as though the dishes were done with that meal, and it was time to plan the next menu. At that time, I was obsessing upon a song, “When The Levee Breaks” by Led Zeppelin. To be more specific, I was listening to the first six seconds of that track on constant repeat…over, and over, and over again. Needless to say, I was driving everyone in the office insane. But there was something about John Bonham’s drums in those six seconds — ominous, thick, dense, and plodding — that got under my skin, inside my eardrum, and would not let me go.

Allow me to go off on a tangent (as I often do) and say something about inspiration. To me, inspiration is not something you tap into, but rather, it taps into YOU. It’s all around us — in the disguise of music, art, film, written word, etc. — it’s just up to us to clear out the leaves in the gutter of our minds and let the “rain” of inspiration inside.

So, I commented that, I want to blend a cigar that tastes the way that the drums sound on “When The Levee Breaks.” (In fact, it became a tweet on our Twitter feed.) I recall Mike [Conder] and I making the conference call to Ernie [Ernesto Perez-Carrillo, Jr., owner of Tabacalera La Alianza and maker of three of our brands] and playing that six second loop from “Levee” to him a few times, then saying, “I want to blend a cigar that tastes how those drums sound.” The speaker phone was silent for a moment, then Ernie replied, “OK…I get it.” In hindsight, maybe it was crazy to use sound as an inspiration for taste, but fortunately, Ernie was a drummer in his former life, and got what I was trying to convey: I wanted the flavors to be thick, dense, and heavy.

Fast forward to February 2012. We’d sold out of every Four Kicks shipment since November, and Four Kicks had made several “Top Cigars of 2011” lists among the blogoshpere. Mike and I were in Santiago, Dominican Republic with Ernie, and we were driving back to the factory. We’d just finished lunch at one of our favorite restaurants down there. (For the record: it’s Italian, but it’s some of the best pasta you’ll ever have, and it’s in the Dominican Republic — go figure!) At this time, the brand that would become “Headley Grange” was simply referred to as “Project HG.”

Tangent #2: Once I knew that the drums on “Levee” were the jumping-off point for the blend, I began to research that particular track further. I was watching a documentary called, “It Might Get Loud” (well worth adding to your Netflix queue). In that film, Jimmy Page goes back to the place where the drums for “Levee” were recorded. He explained that the drums sounded the way they did because of the acoustics of the room in which they were recorded. The room where the drums were recorded was located in a former poor house in Headley, East Hampshire, England. Built in 1795, it was called “Headley Grange.” Convincing my business partner, Mike Conder, that Headley Grange was to be the name of our second cigar brand was a whole other challenge I had to overcome that would be best suited for a follow-up article.

Back to our story and the drive back to the factory. Up until that day, Project HG had undergone many variations of wrappers, binders, fillers, regions, farms, and primings; the combinations were countless. And then came the moment. I call the “Ah-ha” moment (not to be confused with the lame 80’s pop band). I don’t claim to be a “master blender” or even that I know more about tobacco than the next guy; in fact, one of the things I love about this business is that even after 17+ years, I am constantly learning each and every day. When you’re blending a cigar, there’s a lot of trial and error and experimentation with different tobaccos–until you have that “Ah-ha” moment. It’s that instant when you taste that particular blend of tobaccos, let it wrap its arms around your taste buds, and you know in your gut that this is IT. It’s like that moment when you kiss your girl for the first time, and you know you’ve found your ‘forever'(that happened for me the night of May 5, 2010). Well, the “Ah-ha” moment arrived for us when we lit up the most recent Project HG samples in Ernie’s car that afternoon.

Today, knowing that what started as an idea inspired by John Bonham’s drums is being enjoyed by cigar enthusiasts across the United States, Puerto Rico, Dominican Republic, and the Netherlands, is a very gratifying feeling. It’s all about starting with a mere idea that haunts your brain matter — and then through the work of a talented team of individuals — that idea comes to fruition in the form of a tangible and consumable product. For me, it is the reason I do what I do for a living, and why I am blessed to be able to do it.

Jon Huber is founder of Crowned Heads Cigars, and a contributor to Cigar Advisor magazine.