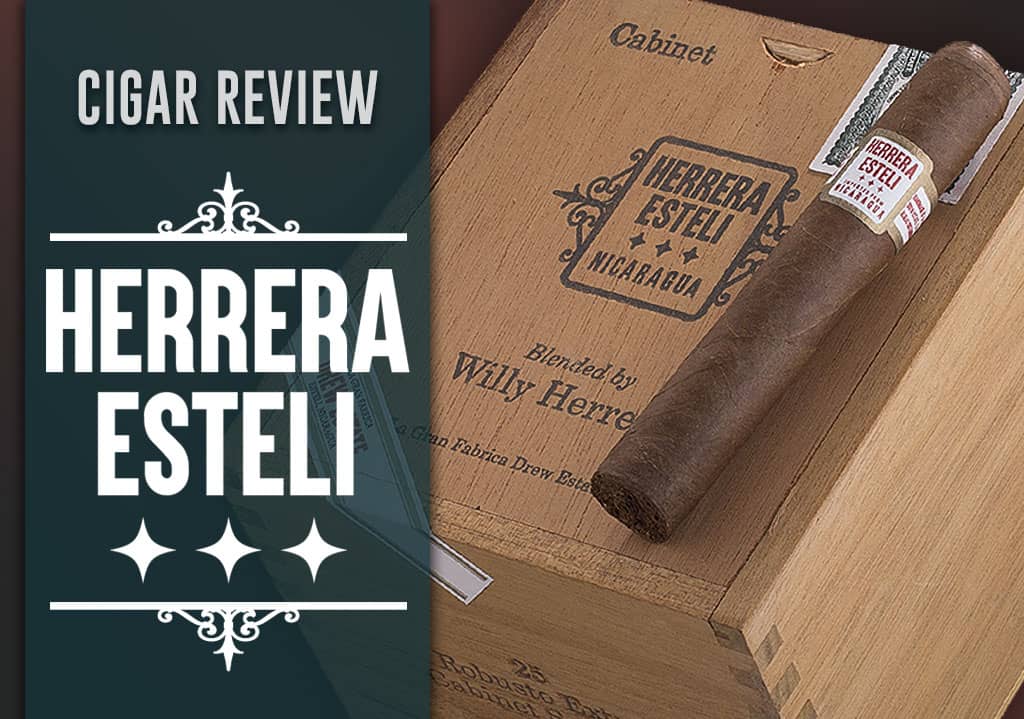 Herrera Esteli is a blend from Willy Herrera, now a part of the team at Drew Estate cigars. According to the DE website, “he brings an authentic Cuban influence to the team. Herrera Esteli cigars feature a medium plus blend that is exceptionally creamy with great balance of spice and sweet.” Already, it put my expectations way outside the norm from the usual Liga Privada, MUWAT and other smokes from the Drew team. I recommend you take a similar approach, as I’m hard-pressed to even want to compare them. So don’t try to. From what I gather in my first impressions (and others’ notes), this is not a smoke for the first-timer, and it has some depth that the seasoned smoker will enjoy. For the purposes of this Herrera Esteli cigar review, I tried the Lonsdale Deluxe.

Construction and Overall Appearance: great looking smoke – with one exception, this stick is vein-free. Nice natural habano look and color. I wouldn’t classify it as toothy, but it looks sharp, even silky – which is a word I had only previously reserved for the Davidoff Nicaragua. Some other reviewers have made note of the band, and I’d be remiss if I left out its throwback look. When you have a company like Drew Estate putting out label art in the style you see on their Liga Privada, for instance – this has a vintage feel that leans more “golden age of cigars” to me. Bold and simple, this cigar has a classic and understated look to it.

Draw: The draw is great – solid, which is nice on this thinner ring. Not a lot of flavor on the pre-light draw, but if I had to put it somewhere – I’d be so bold as to say “sweet” – like in a creamy or buttery kind of way.

Pre-light flavor: Barn hay all the way. It’s been said to me, that unless it smells like a barnyard – it’s going to be missing something. This Herrera Esteli has that flavor in spades, along with a rich earthy aroma.

Toasting & Light: EXCELLENT body on the first few pulls. Not spicy, not peppery, but…let’s say that instead of tasting something, it’s more like walking into a room where someone is steeping a pot of tea from China Palace: it hits you across more senses than one. The volume of smoke off this skinny smoke is impressive, and chalks up a full mouth feel.

Base flavors: Tea, wood (not as aromatic as cedar but not dark like oak), and the slightest hint of spice. And all throughout, very clean tasting. Some citrus in the final third helps refresh the palate a bit, actually, while not getting in the way of the spice. That buttery sensation never really appeared for me; maybe if it were a bigger sized smoke.

Retrohale: The flavors you can get out of the retrohale are the yang to the regular flavors’ yin…and it is BIG. Take leather, charred wood, and molasses – put them all in a big old red wine cask barrel, bang the lid on and shake. Open it up and soak the aroma in. That’s the retrohale.

Aroma: Nutty, buttery and tobacco. This is one cigar that won’t have your wife asking you to undress in the garage and “not bring your stink inside.”

Burn / Ash Quality: As with all thinner ring cigars, pacing is important – and being so close to a lancero sized, you run the risk of heating up this particular cigar quickly. But taking my time, the Herrera Esteli developed a medium-grey ash with some deep rings, without a single flake to be had. The ash holds firm, too. As for the burn, it didn’t take much to get it started, so not a lot of toasting necessary. I’ve got a solid burn line going, and it’s not overly smoky when you put it down. I get the slightest of waves from time to time, and even that fixes itself in no time.

Balance of flavors/Consistency: The consistency in this smoke is pretty good…no out-of-left field flavors, though the nicotine roars in on the final third. Hello, sunshine. As for balance, I’d say yes. Just be prepared for the blast of full strength that awaits you as you get close to finishing.

Here is my Herrera Esteli cigar review in a nutshell:

2nd third – like a new acquaintance who tosses out a dirty joke in front of some mutual friends, it throws in a blast of pepper just to test you out and see if you can hang – and if you two are going to get along.

Final third – thanks to the two-pitcher minimum, you and your new bud are up on stage belting out the karaoke hits.

Whatever Happened to the Smoking Jacket