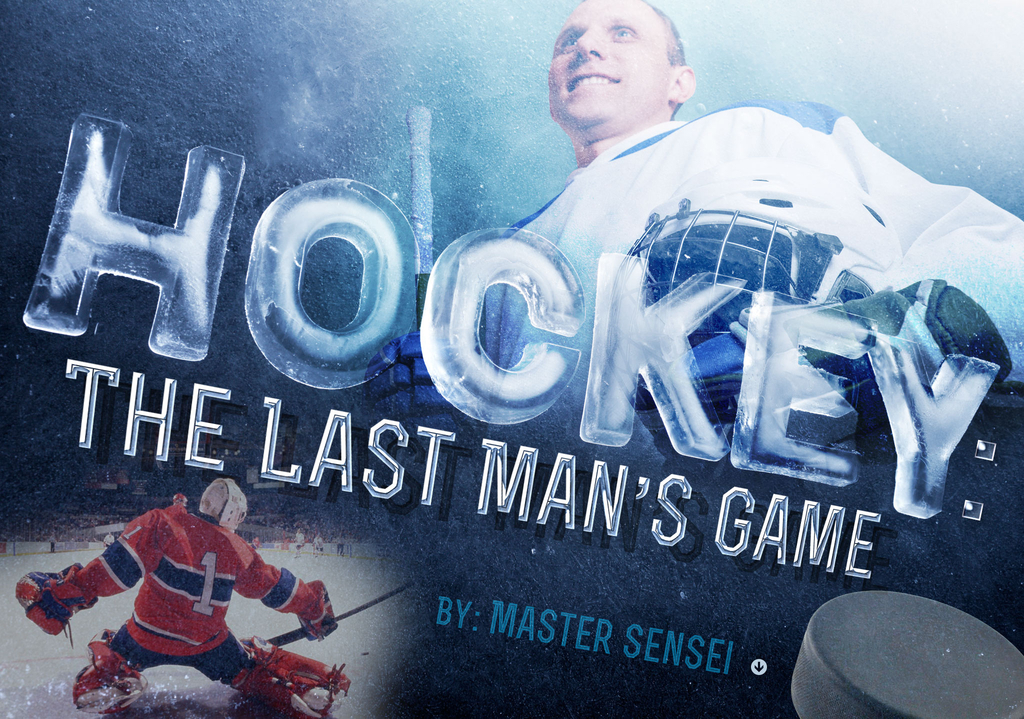 What is it about a competitive sport that earns the distinction of being a “man’s game”? One that requires skill? Determination? Defiance in the face of pain? Certainly when a player pushes through a game on a broken foot, or refuses to miss a single shift with a freshly stitched face – this would be considered tough. But it isn’t just about the pain a man can endure; hockey is a game of fierce intensity, aggression, and respect. It’s the fastest game on earth, and its uniqueness is defined by the men that grind through every grueling shift, selfless men who play for the legacy of the sport. This is a man’s game.

As I watched the NFL playoffs this past season, I couldn’t help but notice a theme building, something that hadn’t seemed as obvious before. Flag after yellow flag, whistle after whistle, reviews, waiting, and more waiting. Eventually a successful play would formulate – a quick pass, a bone-crushing hit and, wait for it… more flags on the field. The ref announces to the roaring stadium that there had been “helmet to helmet contact” or that the receiver was “defenseless” and the defending team is charged 15 yards. Wait, seriously!? I thought I was watching a tough, even brutal, game. The announcers begin scrutinizing the play to the tiniest detail, explaining “These rules help keep the game safe,” obviously pandering to the league, sounding much more like, “I want to keep my job.” I couldn’t help but think, “This sport has been wimpified.”

As a man, I believe I feel an inherent desire for competition. And when I watch a manly sport, I want to see speed, aggression, big hits, intensity, and forgive me if I sound like a Neanderthal, but I may even want to see a little blood! What I don’t care for is this new-age, everybody’s equal, overly-safe crap. In some areas, kid’s soccer games no longer have scores, or winning, or losing. See, we’re all equal, right?… But then again, this is soccer, the game that practically awards cowardice with points. The dives these players take in search of a penalty are an embarrassment to men everywhere. And soccer brawls? I almost don’t want to go into this… A thrash of cheap-shots, slapping, hair-pulling, and kicking – a soccer fight is like watching two transvestites fight over a high-heeled shoe (sorry for the mental picture).

“I went to the fights and a hockey game broke out,” a common phrase you may hear around hockey circles; it makes sense to me. But I hear people complaining more and more that hockey fights should be taken out of the game. “They’re barbaric,” or “unsportsmanlike,” say the misinformed. It amazes me that these newcomers to the game are so quick to change a game they clearly know nothing about. Fighting is a part of the game, just as punching someone in the face is a part of boxing. You won’t find these people trying to remove fighting from the sport of boxing or MMA. I think it stems from a misunderstanding of the rules. Players don’t fight because they’re mad at each other, it’s a mutual agreement to “settle scores” on the ice, so to speak. Think of it like the Wild West; you may find two men settling a dispute in an old-school showdown! Sure, the law is there to step in if things get out of hand, but some disputes need to be settled man-to-man.

Picture this – it’s late in the 2nd period and your team is down 3-1. You need something to get the crowd going, maybe build up a little momentum before all is lost. In most sports, your options are limited – maybe make a big hit (if you’re lucky) or perform a carefully choreographed dance routine… How about you send in your biggest guy to beat the living tar out of the other team? That oughta do the trick! The other guy agrees to it because winning this fight could be all his team needs to tip the scale, not to mention the bragging rights. And while we’re on the subject, I’d like to point out that hockey is distinctly manly in the way it enforces penalties. It’s called the penalty box, the sin bin, or sometimes just “the box”, because that’s exactly what it is – a small cage where players do their time. When you’re in the box, everyone knows what you did, and when the other team gets a power play goal, you’re going to feel it – because hockey players take responsibility for their actions!

Some might even see their PIM’s (penalties in minutes) as a badge of honor, a player with high points and PIM’s is a force to be reckoned with. There’s even a hockey term called the “Gordie Howe hat trick” – which is when a player scores a goal, gets an assist, and a fight, all in the same game. Brendan Shanahan currently holds the record for the most, but a few other recognizable names with Gordie Howe hat tricks include Sidney Crosby, Jarome Iginla, and Bobby Orr. These guys have to be doing something right…

But in all of sports, there might not be anything more manly than the Stanley Cup Playoffs. For starters, players don’t (typically) shave during the course of this legendary, 2-month long series of elimination, making for one grizzly finale. It’s a series of four, best-of-seven match ups to determine the best in the world, and more importantly, the prize of the legendary Stanley Cup. The winning team will have made it through 16 knock-down, drag-out victories, earning the title of the most difficult tournament to win in professional sports. Sure, the NBA recently adapted this same format, but I’d be surprised to hear an argument that the NBA is anywhere near as brutal a sport as the NHL. To make it through all four series (with a maximum of 28 games), players will undergo an exhausting physical beat down. In game one of the 2011 Eastern Conference playoffs, Martin St Louis of the Tampa Bay Lightning took a stick to the face, losing two teeth. After finishing the game and undergoing a double root canal, he took two more shots to the face in games following, relying on team trainers to cement his teeth back in place between shifts. In 1964, Toronto Maple Leaf’s defensemen Bobby Baun scored an overtime goal against the Detroit Red Wings in the Stanley Cup Finals, skating on a broken ankle. He went on to finish the series with the badly broken bone and led his team to a Stanley Cup victory.

Hockey players aren’t paid to play in the Stanley Cup playoffs; they do it for pride, sportsmanship, tradition, and the honor of having their name carved onto the greatest trophy in sports. The Stanley Cup cannot be owned by any one team, when you win this trophy, it is only to share the honor every team prior has shared – dating back over 100 years.

Wayne Gretzky described the moment he learned just what it took to earn the greatest trophy in sports, after losing to the NY Islanders 4 games to none in the 1983 Finals. “We walked by their locker room in the corridor and saw after they won they were too beat up to really enjoy it and savor the victory at that moment. We were able to walk out of there pretty much scot free. We had so much respect for the Islanders players and the Islanders teams that we learned immediately, you have to take it to another level in order to win a Stanley Cup. And that’s what we did. We learned from it and often credit the Islanders’ players and Islanders’ teams for teaching us exactly what it’s all about and how hard it is to win. They won and they were wounded, we lost and we were fine.”

One day there won’t be fighting in hockey, there’ll be a penalty for every hit on the ice. The uneducated, overly safe, competitive loathing public will have its way – and the game will be reduced to the likeness of figure skaters with sticks. But for now, this is a game that stands against the tide – hockey is the last real “man’s game”.

Cigar Dojo Eric G AKA "Master Sensei", is a web developer, graphic artist, SEO, and social media expert, as well as mastermind behind the Cigar Dojo app (the world's greatest social cigar app). With years and years of internet development experience Eric has designed and created dozens of web properties for clients of all sizes. In addition to cigars Eric is also a bourbon and craft beer enthusiast and recently completed the IveHadThat app and website. Eric's passion is defending the principles of right vs. wrong and doing his part to preserve our ever shrinking freedoms via battling the cancer of socialism. Master Sensei says... "cigar's are a symbol of freedom and are a microcosm of a much larger battle." Whoa... deep eh? As a relatively new cigar smoker (only a few years) Eric's passion for the cigar smoking lifestyle is at a fevered pitch, he describes his passion for cigars as being like a kid in a candy store.