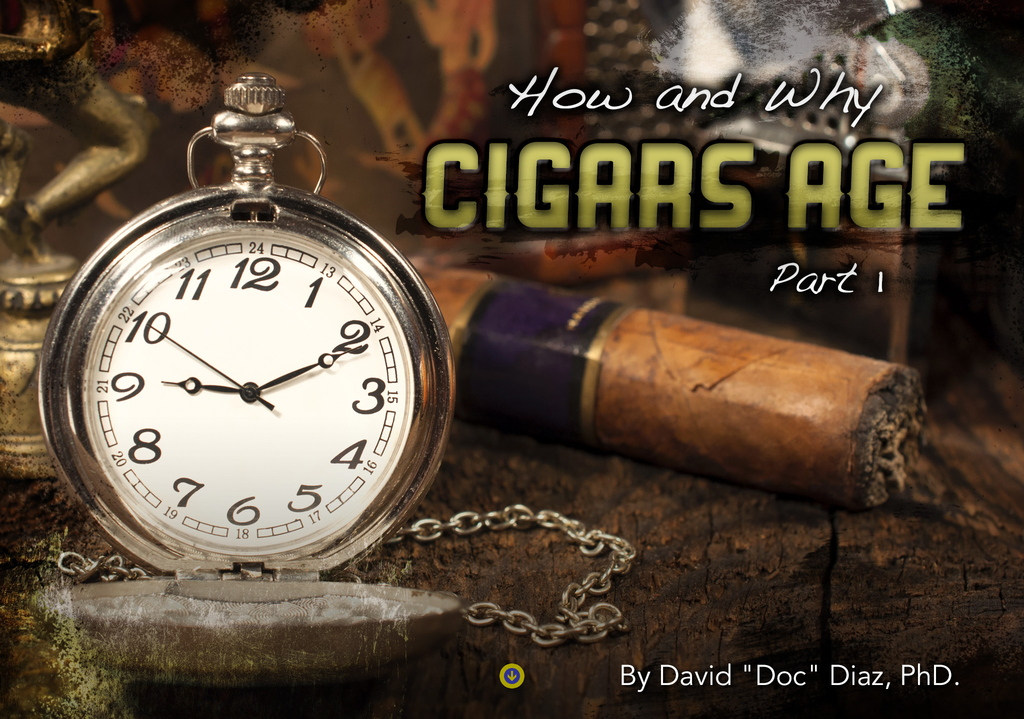 The subject of aging cigars always elicits a wide range of opinions; not only among rank and file cigar smokers, but also among those who have spent many years collecting and aging cigars.

In general, my axiom of the value of aging cigars can be stated this way: “The benefits of aging cigars will vary from cigar to cigar and may range from considerable to negligible.”

Cigars are made of plant matter and all plant matter changes over time, sometimes for better and sometimes for worse. That distinction is important because the question of whether a cigar will improve or worsen with a year or two (or more) of aging, will ultimately be subjective.

These days, most cigars (of non-Cuban origin) are ready to be smoked as soon as they hit the retailer's shelves. Cigars coming out of the Dominican Republic, Nicaragua and Honduras, just to name a few, arrive at their point-of-sale with considerable age and in prime smoking condition.

The best growers and manufacturers are meticulous with their handling of the product. The tobacco has been fully cured and completely fermented. It has likely been baled and aged for 2-3 years prior to being used to make premium cigars. After the cigars have been rolled, they typically receive another 3 months (or longer) of rest in aging rooms, prior to shipping. So, by the time the cigars reach your humidor, the tobacco has experienced considerable aging.

Nevertheless, because a cigar is a plant product, the tobacco will continue to morph and evolve (even if very slowly) over the course of years. Though cigar tobacco has undergone much fermentation at the factory, there will continue to be micro-fermentation, which will continually purge the residual by-products of fermentation (e.g., Ammonia) and other compounds that can make the flavor of the tobacco acrid and unpleasant until they have dissipated.

Various other compounds within the tobacco will also change over time. As your cigars rest in your humidor, the oleoresins and moisture will migrate across the leaves, becoming distributed more evenly throughout the cigar. This will predispose a cigar to a more even burn and will result in subtle changes in the flavor. This process is known as “marrying.”

As the cigars continue to age and marry, the flavors will change and may become less distinct. This is because the oleoresins, which carry the bulk of the flavor in a cigar, will slowly evaporate. So, when you smoke a cigar that has been aging for a good length of time, the flavors that were once so clear may be more difficult to discern because they have mellowed and blended. While this may sound ominous, it is often a good thing since the tobaccos will have a tendency to become smoother and will display fewer “off” tastes and/or less “bite.” You may be able to pick up flavors that were once masked by the other, more powerful flavors in the tobacco. This is the essence of COMPLEXITY in a cigar. Complexity is the emergence of layers and multiple combinations of flavors within a cigar and is a feature of well-aged tobacco.

Making the Most out of Aging Cigars

It is difficult to predict how a cigar will age and you can’t be sure whether or not you will even like the cigar after it has some significant time in your humidor. The cigar may indeed be smoother and more complex, but there is no guarantee that you will enjoy that flavor profile. It is the individual smoker that decides if the changes are good or bad and there is no single answer that works for every person.

Many factors are responsible for how any given person will interpret the flavors and characteristics of a cigar. The number and quality of a person’s organs of taste and smell, their prior experiences with flavors and aromas, and their ability to perceive and subsequently label these tastes and aromas will all play a role in determining whether or not they will relish the fruits of a well-aged cigar.

There is no universal “ideal” time period for home aging as far as getting the best results. The best way to decide if a cigar is aging beneficially is to smoke many cigars from the same batch over a period of time. In other words, by smoking them as they age, you can experience, first-hand, the changes taking place during the course of a cigar’s lifespan. In that way, you can check their progress and determine whether you should smoke them quicker because their body and strength is tailing off rapidly, or whether you can relax and smoke them at your leisure because they are aging slowly and gracefully. 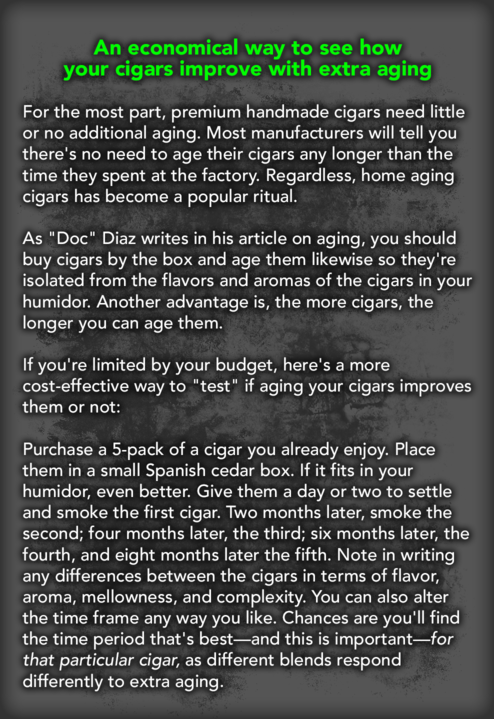 Laying cigars down to age takes a major commitment of time, money, and patience. Time is a concept that is lost on many cigar smokers. Many people buy cigars in samplers of 5-10 cigars so they can smoke one or two here and there over an indefinite time span and typically run out of those cigars before they have significant age.

Ideally, you should buy cigars by the box for aging. That way you can keep them in their original box and away from the influences of other aromas and flavors of cigars in the same humidor. By purchasing cigars by the box, you can pluck one out at various intervals and note the changes that 3 months, 6 months, 12 months, and more, have made on the smoke.

But, purchasing boxes of cigars also has its drawbacks. It requires some serious cash, not only for cigars, but also for storage space. People that want to give their cigars some serious age must think in terms of large volume humidors such as large coolers, or cabinet style humidors, or walk-ins. Providing the space for hundreds, if not thousands of cigars can be costly, but is a necessary adjunct to serious collecting and aging.

Aging premium cigars can be an educational and fun pastime and it can result in some optimally aged smokes. But, before you embark on a plan of collecting and aging cigars, be sure to consider the potential costs as well as the prospective rewards.

[…] this point, let’s be clear about something. Resting is not the same as aging cigars; that is, unless you intend to age your cigars before smoking them, in which case we’re talking anywhere from thee months and beyond. Depending on the condition […]

[…] amalgam of flavors and aromas that tend to build or improve within a given cigar as you smoke it. As David “Doc” Diaz, Ph.D. defined it in his article, How and Why Cigars Age – Par…, “Complexity is the emergence of layers and multiple combinations of flavors within a cigar […]

David " "Doc" " Diaz is the publisher and the editor of Stogie Fresh Cigar Publications. He has served as an educator, researcher and writer and has taught in the Health Education and Health Science field for over 30 years. He possesses an earned doctorate from Nova Southeastern University. Doc is a Certified Master Tobacconist (CMT), having received this certification from the Tobacconist University and is a member and Ambassador of Cigar Rights of America (CRA).

My Experience with a Cuban Cigar