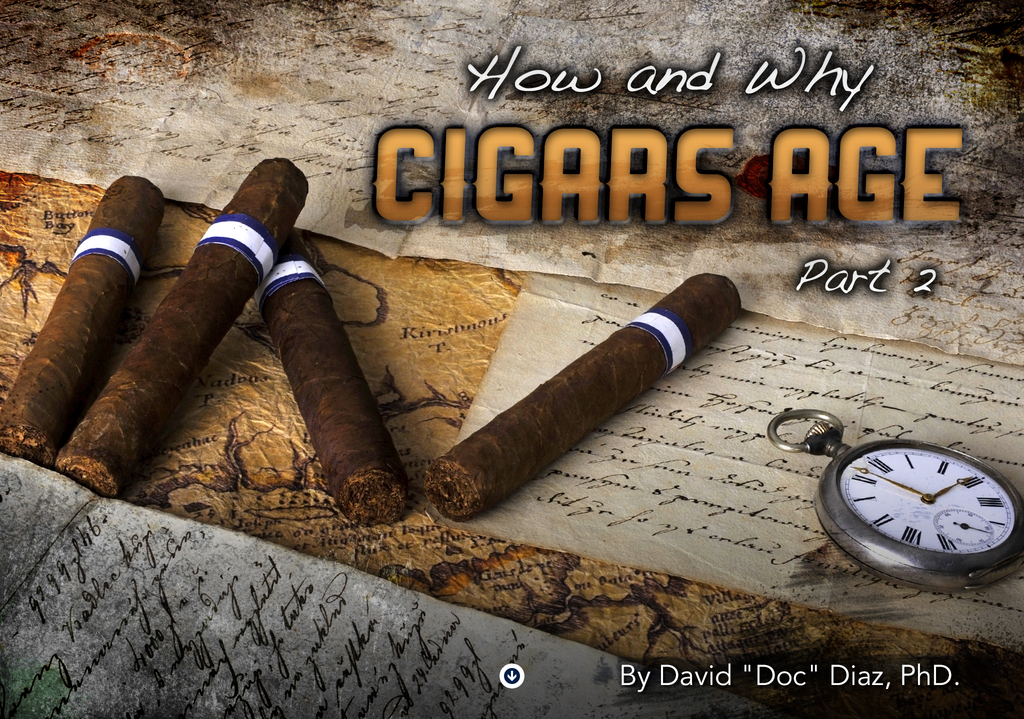 How and Why Cigar Age Part 2

Last month, “Doc” Diaz discussed how cigars of non-Cuban origin are aged at the factory level; micro-fermentation; the process of “marrying;” and how aging cigars over long periods of time can affect the flavor, and more specifically, the complexity of a cigar.

Now it’s time to discuss the principles of extended aging. Below are my thoughts on the type of cigars that will benefit most from aging and how to care for these cigars.

One of the more important factors in the capacity of a cigar to improve with age would be the strength of its tobacco and the total quantity of strong tobacco used in the cigar blend. Cigars that are made with a lot of ligero (i.e., tobacco from higher on the plant with thicker leaves) will have the greatest capacity to age for a long time while still retaining sufficient flavor. If these cigars are kept in ideal conditions, they will more likely develop increased complexity and balance and will become more harmonious over time. This, of course, is where manufacturers can help the consumer by giving the consumer more information about the tobacco blends.

Conversely, cigars with a higher percentage of lighter tobaccos (i.e., tobacco leaves from lower positions on the plant and/or with thinner leaves) will likely lose too much of their flavor signature and start tasting like paper.

Part of the perception of strength in a cigar is related to the amount of ammonia, which is a by-product of fermentation. If the tobacco in a cigar was not fermented adequately, it will taste acrid and bitter and will seem strong. As a cigar ages in your humidor, it will continue to micro-ferment and eventually the ammonia will dissipate and the cigar will not taste as strong.

Aging your cigars will not likely influence nicotine levels in the tobacco, but the slow evaporation of oleoresins and the reduction of ammonia will both cause a cigar to seem more complex, balanced and nuanced as it ages.

For long-term aging I would recommend a humidity level of around 63-68% RH. A lower humidity level will allow the flavors and aromas of the cigar to concentrate more. As you allow some of the moisture to evaporate, the essential oils will concentrate within the tobacco. Those oleoresins are what contain the flavor and aroma particles. Also, a lower humidity will counterbalance any propensity of the tobacco to develop mold. The only caveat with this approach is that you must be sure not to allow the tobacco to become too dry, which would eventually cause the oleoresins to evaporate as well. I keep my cabinet humidors at 68% RH, which gives me a little margin for error and will accommodate all my cigars, even the ones not meant for long-term aging.

Buy Cigars Young and Age Them Yourself

As a general rule, cigars whose tobaccos have been long-aged prior to manufacturing will have less capacity for long-term aging in your humidor. The reason manufacturers will age some tobaccos a long time before rolling them into cigars is so the finished cigars will display the benefits of aging. These benefits would include balance and complexity, as well as nice flavors, right out of the box. Nevertheless, you would do well to remember that cigars whose tobaccos have been pre-aged for, say, 7-10 years, are intended for immediate smoking and their capacity for further aging may be low.

Keep Cigars Away from too Much Oxygen

Oxygen provides the fuel for oxidation, and oxidation speeds up the aging process. If you were interested in aging your cigars for any length of time, you would do well to slow the oxidation process. To prevent unrestricted oxidation it's best to keep the cigars closed up tightly in their boxes and, if they have cellophane wrappers on the cigars, to leave those cello wrappers in place. Also, if a cigar box comes wrapped in cellophane, there is no need to remove the cellophane (outside of digging into the stash for smoking). I’ve seen cigars that were packaged in the 1960’s with cellophane on the box and the owner kept those cigars in that state until around 2007. Those cigars were in perfect condition when the box was opened. Less oxygen means slower aging. However, you don’t want to cut off oxygen altogether. An airtight humidor will not allow oxidation, nor will it allow any humidity to escape and may lead to moldy conditions.

The only way to test the effects of aging is to periodically smoke cigars from the same batch. Unless you smoke the cigars over a period of time and compare the results, there is no way for you to know how they have changed with aging. So the best thing to do is to buy cigars by the batch (10 or more) or by the box and periodically smoke the cigars to see how their flavor and burn characteristics are shaping up. You will need to purchase enough cigars to smoke one every few months over a period of many months or years. Remember to keep notes on the cigars as you smoke them and compare those notes as you continue to age the cigars.

Everyone has different taste preferences and your perception of “peak performance” of any given cigar may differ from mine. More importantly, your perception of the flavor of a well-aged cigar may be negative, so be sure to sample cigars from any large batch to keep track of its progress. All cigars will have a limit to which they can continue to age successfully and still meet your criteria for a great-tasting smoke.

David " "Doc" " Diaz is the publisher and the editor of Stogie Fresh Cigar Publications. He has served as an educator, researcher and writer and has taught in the Health Education and Health Science field for over 30 years. He possesses an earned doctorate from Nova Southeastern University. Doc is a Certified Master Tobacconist (CMT), having received this certification from the Tobacconist University and is a member and Ambassador of Cigar Rights of America (CRA).

Reading Time: 3 minutes Fewer things bring us joy more than new cigars. Here are three blends that will help you make the most of the fall season!