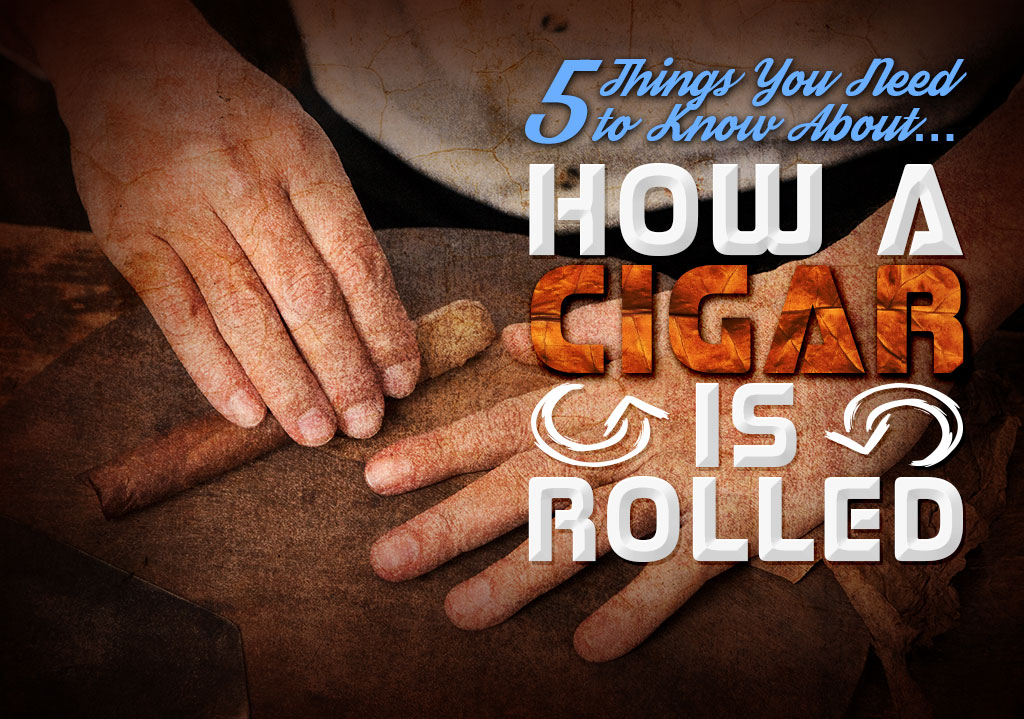 Rare is the premium cigar enthusiast who doesn’t want to learn more about the manufacturing of cigars, including how cigars are rolled. If you’ve ever had the chance to visit a real-life cigar factory in action, it’s a fascinating process. Although technology has played a role in improving many aspects of cigar manufacturing, much of it is still pretty archaic. Moreover, premium cigars are still one of the few all-natural consumables that are made entirely by hand, from the planting of the miniscule seeds, to banding and packing the finished cigars, to making the cigar boxes in which they’re placed.

Because there are about 300 steps in the premium cigar making process, there’s little room to describe them here in detail. So, I’ve chosen five things that take place during the numerous cigar production stages that will help make you know your smokes, starting with the rolling process.

In most factories, premium cigars are rolled by teams of two, a buncher (bunchero) and a roller (rolero). They may be seated together or apart, but one thing that’s consistent in every factory is, the best rollers always sit in the front row. When rollers begin their apprenticeship they start in the last rows. As their skills improve, they move closer to the front. For some it can take years to make it to the first row; the time it takes to get there depends on how consistently and aesthetically well they roll.

The bunchero’s role in how cigars are rolled is as equally important as the rolero’s since he or she is responsible for making the “bunch,” which consists of the filler leaves and the binder portion of the blend. When you think of a “long-filler cigar,” you might assume that all of the leaves are about the same length from end-to-end. This is not so. The leaves are often folded or broken to create the correct size and shape of the cigar they are preparing. This is also done to provide an evenly packed cigar so there are no “soft spots” along the cigar’s length. The buncher must also place the leaves in the bunch in such a way so that air flows freely through the cigar.

Before going to the rollers who will apply the wrappers, the bunched cigars are removed from the molds and draw-tested on a DrawmasterTM machine. This device literally sucks air through each cigar and registers the amount of draw within the factory’s acceptable range. Cigars that fail the draw test are rejected, but some tabacaleras have so much faith in the experience of their rollers, they don’t bother using a Drawmaster.

A poor draw isn’t the only thing that will get a cigar exiled to the reject pile. Using Rocky’s standard, which is extremely high, finished cigars whose wrappers are off in color, either lighter or darker than the required hue, are packaged and sold as “Factory Selects.” Cigars that vary too much in color or have spots, etc. are packaged and sold as “Factory Seconds.” What’s interesting is, these very same cigars are well-made and have been draw-tested; they may be pretty consistent in color, too. The difference, at least in Rocky’s case, is that their color is not the specific color he wants for his boxed premiums. It’s also the main reason why the best cigars, regardless of where they’re made, always look so appealing when you open the box.

Speaking of such things, earlier during the production process, the wrapper leaves that will be used to complete the cigars have also been sorted by color. Due to their uncanny ability to identify color variations more effectively than men, this job is reserved for women. Additionally, the wrappers are also wetted-down to keep them supple, flexible, and to prevent them from drying out before they get to the rolling tables.

When ready, the bunches are brought over to the rollers who will have a stack of wrapper leaves ready to roll them into finished cigars. The wrapper is placed on the rolling table and spread out flat. Using a chaveta, a knife with a wide, curved, razor-sharp blade, any vein remaining on the edge of the wrapper is sliced away. The leaf is then cut in a specific, curve-like manner so it will wrap properly around the cigar. (I often wonder how long it was before the early Cuban cigar rollers discovered that the leaf needed to be cut this way to get it right.) If it was cut any differently, the wrapper would not achieve the desired spiral effect. Imagine having to make that cut perfectly, in some factories, over 350 times a day.

Starting at the foot (bottom) of the bunch, the torcedor rolls it into the wrapper, while at the same time stretching the leaf to avoid pinching and wrinkling it during the process. The roller pulls the partially rolled cigar back toward him or herself with the left hand, while the right hand stretches the leaf by pulling away in the opposite direction in a sort of stop-and-start motion. Some roller’s glue is applied at various spots to help the wrapper adhere to itself. This technique is also referred to as “left-hand rolling,” assuring a firm and evenly rolled cigar, so the finished product looks smooth, oily and virtually seamless. Some torcedores are so fast, you barely notice when they stop to stretch the wrapper, making the cigar look like it’s being rolled in one swift motion. A master cigar roller can roll almost any cigar shape in about 30 seconds.

The final stage of cigar rolling is making and applying the cigar’s cap. The cap is the small swatch of tobacco that covers the head of the cigar. The swatch is taken from the wrapper leaf so the cap will match the color of the cigar’s body.

The “Cuban triple cap” is the most desired by cigar smokers for its ability to remain intact after cutting, and while you’re chomping on it. The term “triple cap” comes from using three pieces of wrapper leaf to complete the process. The first piece of the cap comes from the wrapper leaf, itself. The second piece is a small round swatch of wrapper (noted above) that is either cut with a special tool that looks like a giant punch cutter (see chaveta pic above), or is made by placing the foot of the cigar on top of a piece of wrapper leaf and tracing around the foot with a chaveta. Roller’s glue is applied and the cap is fashioned in such a way as to make the cigar look like one entire piece. The third and final piece of the cap is done by taking a thin strip of wrapper, applying glue to it, and wrapping it around the cigar’s “shoulder,” where the cap and body of the cigar meet. This gives added strength and support to the cap, and in some cases, it’s so well done, you can barely see it. If you inspect one of your best cigars closely, you’ll very likely see this type of cap, which tells you that you’re looking at a very well-made cigar.

The next time you pick up a cigar to smoke, look at how it’s been packed and rolled. If it was done well, take a moment to admire this true work of art that’s been made the same way by generations of cigar makers…then you can light it.

After all these years, who knew. Will Enjoy even more now. Thanks

do u add chemicals.

That was a good guide to smoke more hand made cigars.

Wow this is awesome. Cigar rolling is definitely a cool art.
Thanks for sharing
Jane @ NewportButane.com