It’s happened to everyone who smokes premium cigars – the bad burn caused by poor cigar construction. Whether it’s the cigar going out on you too fast, canoeing, or the wrapper coming undone, a bad burn is one of the most frustrating things that can happen. Since a bad burning cigar requires so much extra work, maybe a better word would be “irritating.” Often times, you’ve spent so much time getting the cigar to straighten out, you don’t even remember how the darn thing tasted.

There are several factors that contribute to a bad burning cigar. Some of these I’ve touched on in past articles. For example, it could be the wrapper was too delicate, too thick and oily, or just an inferior quality or poorly cured leaf. Other factors can be a wrapper leaf that’s too dry, which tends to cause the leaf to unravel. It could also be due to poor rolling. Either the bunch wasn’t rolled carefully enough, or during the bunching process some of the binder, which aids in the burning of a cigar, got tucked into the filler. The result is a canoeing cigar, because there’s nothing in those spots to help the wrapper along.

One cause that I recently discovered by experience is a wrapper that is not rolled flush to the binder. In other words, the cigar may have looked fine when it was packed in the factory, but somehow the wrapper relaxed enough to form a thin gap between the seams.

Photo A shows a cigar that I smoked a few weeks ago. It was fine until it began to burn crooked. I believe the cigar had a Maduro wrapper, which tend to be thicker than most other wrappers. Sure, I touched it up with my lighter, but that didn’t help. It’s interesting, too, how I don’t remember what cigar it was.

What happens is, as you continue to smoke the cigar, smoke leaks out under the gap, causing an uneven burn. Notice also that when you touch-up the cigar, you’ll see the smoke seeping out of the gap as you apply the fire. 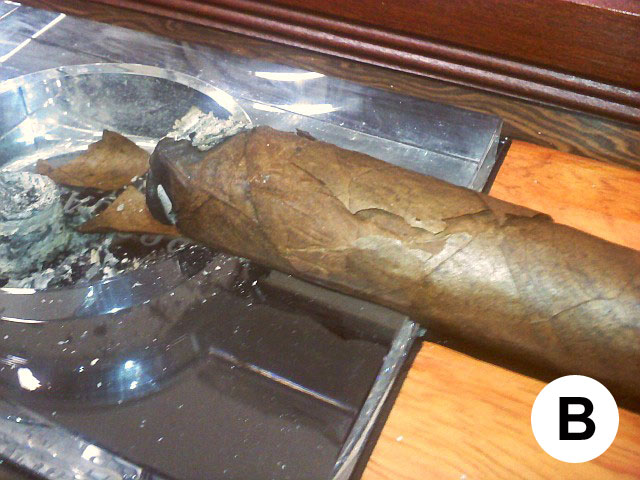 Eventually, this can even lead to the wrapper coming unraveled and/or breaking up into pieces until you have nothing but a big leafy mess (see photo B).

The big question is, why did the wrapper do this? It could be any one of the above reasons, or it could be the heat of puffing on your cigar caused it to loosen up; not unlike when you draw too hard and too often, the cigar may swell-up and the wrapper will crack. All I know is that if a cigar is destined to burn poorly, it will.

The best advice I can give you is to carefully inspect the wrappers on your cigars when you buy them. Then, let them settle in your humidor long enough to acquire the proper amount of moisture. The next time you find your cigar radically canoeing, take a look at the foot. If it looks like my photo, you may just want to chuck it.

Reading Time: 2 minutes Another twist in our boozy cigar pairings: a pale Pinot Grigio and a swarthy RyJ Montague. You may be thinking, “White wine with a dark cigar…does that even work?” Indeed, it does – and not just because we said so. Read the pairing info inside to see how!