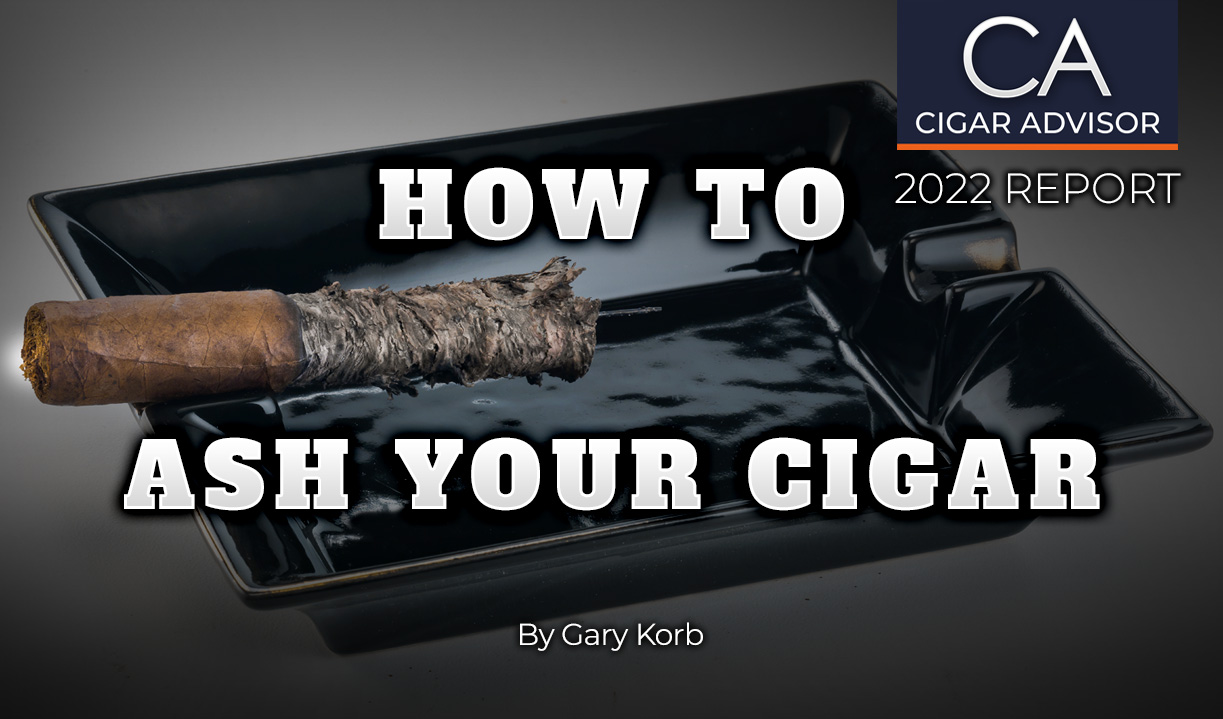 And What Your Cigar Ash’s Length, Shape, and Color Really Mean

They say that there are two things in life you simply cannot avoid—taxes and death—but there’s one more: ashing your cigar. Next to puffing on it, tapping the ash off your cigar is possibly the most effortless thing you’ll have to do during your session. Of course, there’s no right or wrong way to ash your cigar. However, there are some ashpects to cigar ashes that’ll come in handy as you become more comfortable as a cigar smoker.

Cigar ashes vary in color, texture, and firmness. Colors can range from chalky white to a variety of light and dark grays, to grays with black stripes, to more marble-like patterns, and even to almost black. I’ll have more on ash color later.

Cigar ash texture can range from smooth and tightly granular (almost like polished granite), to a series of ringlets or what is referred to as a “nickel stack,” to rough and jagged.

Certainly, a firm cigar ash is preferable to a flaky ash. It will also burn longer before having to tap it off, but a firm ash can be tricky, too. How many times have you let a firm ash continue only to find it in your lap a few seconds later? A more flaky ash will often scatter dandruff-like flecks on your clothes as you smoke. And if you’re smoking on a windy day, don’t worry, the breeze will ash your cigar for you.

Ash firmness may also have ties to size. So, does ash size matter? According to an Advisor article on long cigar ashes by Paul Lukens, “Absolutely. The thicker the cigar, the stronger the ash. The ash will get more structural support from those big ring gauge cigars because they use more long filler than your typical Robusto.” Paul also adds that cigars over a 60 ring gauge may be problematic because “anything thicker can get pretty awkward to hold.”

How do you know when to tap your cigar’s ash?

If you pay close attention to your cigar, it’s usually obvious, but ashes of approximately three-quarters of an inch in length are a safe bet. If they’re really firm, you can go an inch to an inch-and-a-half and beyond!

One of the best ways to know when your cigar is ready to be ashed, is to test the ash by gently touching it against the inside wall of the ashtray. If it has a fair amount of resistance, you can usually go a little longer, but it could be a gamble. Some cigars will produce ashes up to over two inches in length before they succumb to gravity. If the ash is soft, you’ll notice it will begin to dissolve as soon as it makes contact. In that case, simply tap-tap and let it go.

What does its length say about your cigar ash?

For one, the longer and firmer your cigar’s ash, the better the quality of the rolling. However, the length of your cigar ash does have one other advantage than being a competitive attribute. A longer cigar ash, let’s put it at, say, five-eighths to one inch, will help your cigar burn cooler by acting as a quasi-filter. It may also help issue some additional flavors to the mix. On the other hand, if the ash gets too long it may smother the hot core in the business end of your cigar and cause it to go out.

If you’ve let the ash get a little too long, or it’s becoming a bit cumbersome, it’s often better to ash your cigar by rolling it against the side or base of the ashtray. By keeping some of the ash intact, it will help keep the cigar burning evenly.

What does its shape say about your cigar ash?

It’s hard not to be impressed by a long cigar ash, especially if it’s clean and neat in appearance. I prefer a cone-like or pointy shape on my ashes. But you don’t always choose the ash; more often the ash chooses you.

Two signs of an “ideal” ash are a ball-shaped “cherry” or a bullet-like cone-shape. They’re also signs that the cigar is not only burning perfectly, but that it’s been expertly rolled. There’s also a shape called a “crown” where the cone portion is surrounded by a shorter wall of light ash giving it a craggy, crown-like appearance.

For those instances where you have a fair amount of ash left even after tapping, you can form a cone of your own. Place the ash-end of the cigar anywhere the base and the wall of the ashtray meet, and gently turn it, rounding-off the sharp, flakier edge of the ash.

Cigars that burn with a sharp, cone-shape ash have most likely been rolled using a technique called “booking.” This technique is done by placing all of the filler leaves from the bunch atop one another and rolling them up like a scroll. You may also get a crown shaped ash from booking.

Another method is called “entubado” or “in tubular” fashion. Each leaf is rolled cylindrically around the previous leaf, allowing the smoke to move freely through the finished, cylindrical cigar. The result is a better draw while more aroma and flavor are transferred to the palate. It’s more time consuming and expensive, but entubado rolled cigars tend to produce a more even shaped ash.

What does its color say about your cigar ash?

Many things have been said about what the color of a cigar ash means. Frankly, the color of the ash says more about the soil in which the cigar’s tobaccos were grown than the quality of the ash. Ash color has more to do with the mineral and nutrient levels of the soil. The lighter or whiter the cigar ash, the more magnesium, calcium, and nutrient dense was the soil in which the tobaccos were grown. The darker the ash, the less mineral rich. Cuban cigars are known for their darker ashes, which gives you an idea of how the ash color may not make too much difference in flavor and aroma overall. One thing is certain though, too little mineral content can make a cigar taste acidic. And in the case of white ashes, if they tend to be very flaky there was probably too much magnesium in the soil.

How to ash your cigar:

Now that you know everything about what makes your cigar’s ash what it is, what about the how of ashing your cigar? Let’s start with the inspection of your cigar before you even light it. If your cigar has too many soft spots along its length, that will affect both the ash and the burn. Humidity is important, too. If the cigar is too moist, it will produce a darker ash, and often, the burn line will look like a fat lip. You may even end up relighting repeatedly which can really kill a session.

Generally speaking, you’ll know almost instinctively when to ash, and that’s fine. Most cigars with firm ashes will let go in three-quarter inch nuggets, which is the safest length to tap.

For those looking for a specific technique, that’s more a matter of individual preference based on experience over time. Therefore, all I can add are a couple of tips to give you the feel of it, so here you go:

When the ash gets that three-quarter inch mark (sometimes it’s closer to half an inch), lightly tap the cigar over the ashtray until the ash lets go. Letting the ash get longer is up to you. Also, don’t bang the cigar against the ashtray or you risk cracking the wrapper.

Rather than tapping off the ash, you can also gently “break” the ash off on the wall or base of the ashtray. This doesn’t necessarily produce a cleaner ash, but you can very lightly turn the cigar between your fingers back and forth to round-off the remaining ash, which can make the ash look a lot neater.

NUB’s I always leave the ash on as long as possible. It gives a great flavor and keeps the heat down. In my opinion this technique is the best way to enjoy this cigar

Thanks for the comment Michael. I would tend to agree that a little extra filtering can help. But once you get to Nub Street, if the cigar is bitter, there’s little you can do. G-~

Reading Time: 6 minutes Looking for a great smoke, but have to draw the line at 10 bucks? Toro fans, look no further: this 10-Under-10 matches flavor to value with 10 top Toro cigars under $10 per stick…and will satisfy smokers of every stripe.

Humidor Set Up: How To Season a Glass-Top Humidor