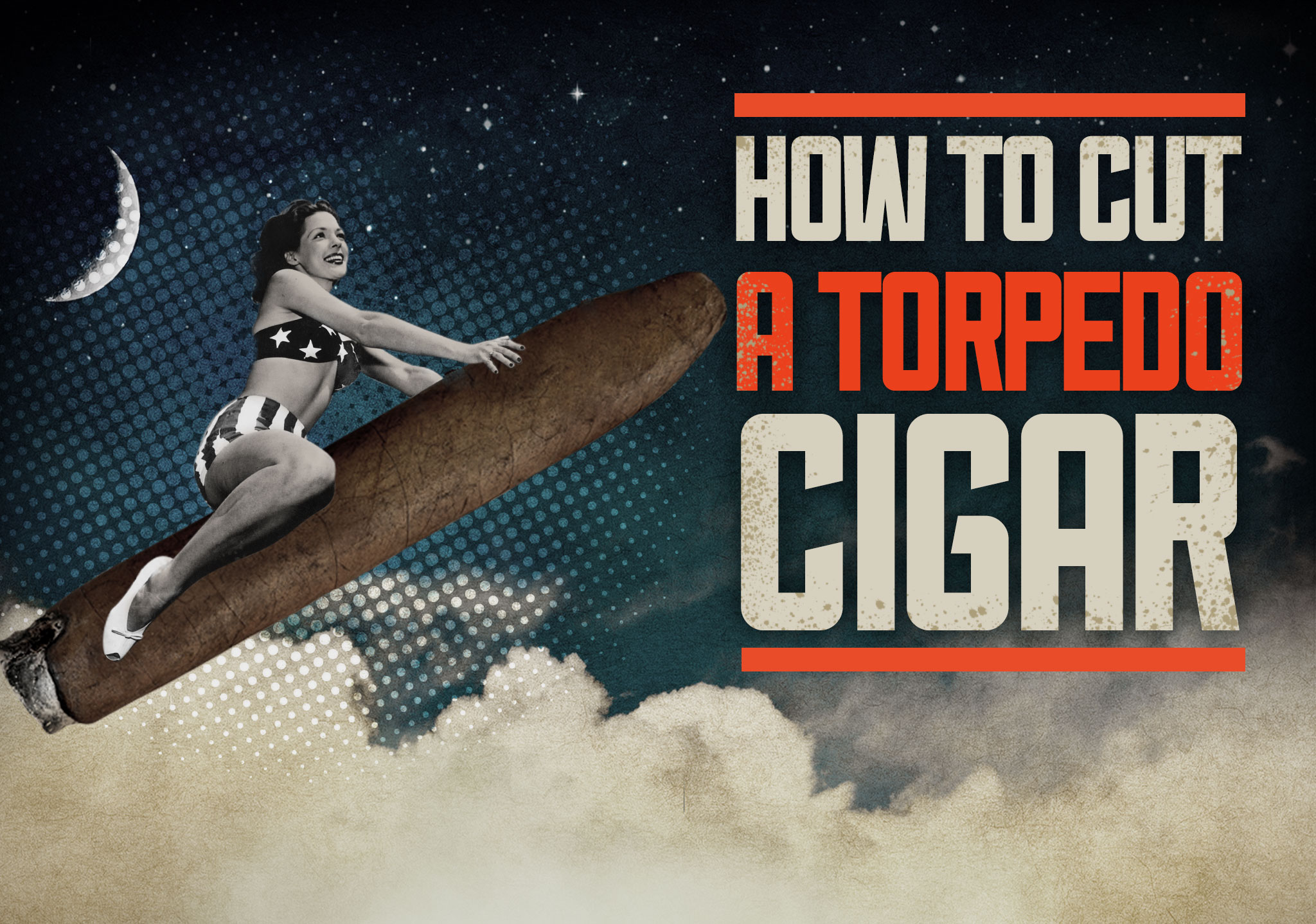 How To Cut A Torpedo Cigar

So, you’re ready to smoke your first Torpedo cigar. Congratulations! You’ve moved up to one of the big boys, but you’re not entirely sure how to cut a Torpedo cigar it because the head is rolled to a point. Cigars of this type are categorized in cigar speak as “figurados,” which also includes Belicosos, Pyramids and the like. They’re rolled in this bottle-neck style so the smoke is more concentrated, and therefore, richer in flavor when it hits your palate. But don’t let that pointy little head intimidate you. It can be cut just like a round or flathead cigar. The main difference is how you cut it and the type of cigar cutter you use.

Let’s start with the “straight cut.” This cut is done the same way you would cut most cigars, and calls for a double-blade cigar cutter like the popular XiKAR Xi2 and similarly designed cutters like the Lotus Prestige.

For this type of cut, place the open cutter over the head of the Torpedo at about 1/4 of an inch down from the tip, keep it straight, snap the blades together and check the draw. If the cigar draws well, you’re good to go. If not, you can clip another 1/8 to 1/4 of an inch and draw again. Repeat, if necessary, until the draw is right where you want it. I like to use this type of cut on cigars like the Montecristo #2, which has a delicate Connecticut Shade wrapper, so you want very sharp blades to keep it from shredding. It’s also mild in body, so, when the smoke travels through the narrow opening, its mellow flavor doesn’t turn too sharp.

It’s all about control

The “perfect” cut is another method that also works great on tapered head cigars, especially if you want even more control over the depth of the cut. You can use the aforementioned cutters, or a double-blade, two finger cutter like the Vector 58 ring cutter or Xikar X8.

Lay the cutter flat on a table or countertop, turn the cigar upside down, place the head in the middle of the cutter, and snap. Depending on the width of the cutter, the first cut may be too short. So, as noted above, check the draw and repeat the procedure as needed until you’re satisfied with the draw. One of the cigars I’ve used this method on is the Ashton VSG Torpedo, because it’s an expensive, full-bodied cigar with a lot of complexity, and a specially aged Ecuadorian Connecticut wrapper; therefore, I don’t want to over cut it or tear the wrapper, and have to trash it. Ouch!

Seeing it from another angle

Here’s another method for how to cut a Torpedo cigar that you may not have heard about. Called the “angle cut,” you can use any of the double-blade cigar cutters I’ve already mentioned or cigar scissors. Using the “straight cut” method, after you place the cutter over the head of the cigar, tilt it at about a 45-degree angle and snap the blades shut. It may look a little weird, but you’ll notice that much more surface area is exposed. The result is a little better draw and more smoke directed at your palate without sacrificing the narrow opening. A great cigar for this cut is the Oliva Serie V Melanio 2013 Torpedo Maduro. As an exceedingly smooth, creamy, and complex full-bodied cigar with a slightly thicker Mexican wrapper, by cutting it at an angle you’ll get more of its distinctive flavor and aroma.

IMPORTANT: Because Torpedoes are not capped like most cigars, you don’t want to go too far or the cigar’s wrapper may unravel on you. I’ve seen some cigar smokers cut the head down to the cigar’s shoulders, eliminating the tapered section entirely. Good Lord, don’t be that guy…this defeats the whole purpose of smoking a tapered head cigar.

I’ve used all of the methods above successfully, but I also like using a V-cutter (also called a “cat’s eye.”). The V-cutter’s design is perfectly suited for cutting tapered head cigars, and gets the cut right the first time, every time. The V-cut leaves a clean, cleft-shaped cut, and it’s usually deep enough to give you a good draw.

To make a V-cut, open the cutter, place the head of the cigar through the front of the “eye” until it stops. Hold the cigar steady, snap the blade shut, and check the draw. You can even use a V-cutter for making a cleaved angle cut.

The most impressive V-cutter I’ve seen in terms of overall design is the XiKAR VX V-Cut. It looks and works like a standard double-blade cutter, too, making it easy to use. I’ve used it on some of my favorite cigars like the Padron 6000 Maduro. This robust, box-pressed Torpedo has an excellent draw, and once lit offers gobs of flavor. Since the wrapper is a thick, oily and naturally sweet Nicaraguan maduro it’s almost as if the V-cutter was made especially for use on this type of cigar.

Whichever method you choose for how to cut a torpedo cigar is a matter of preference. However, if Torpedoes, Belicosos, etc. are among the shapes that you smoke most often, give all four cutting styles a try, and use the techniques that work best for your favorite cigar brands.