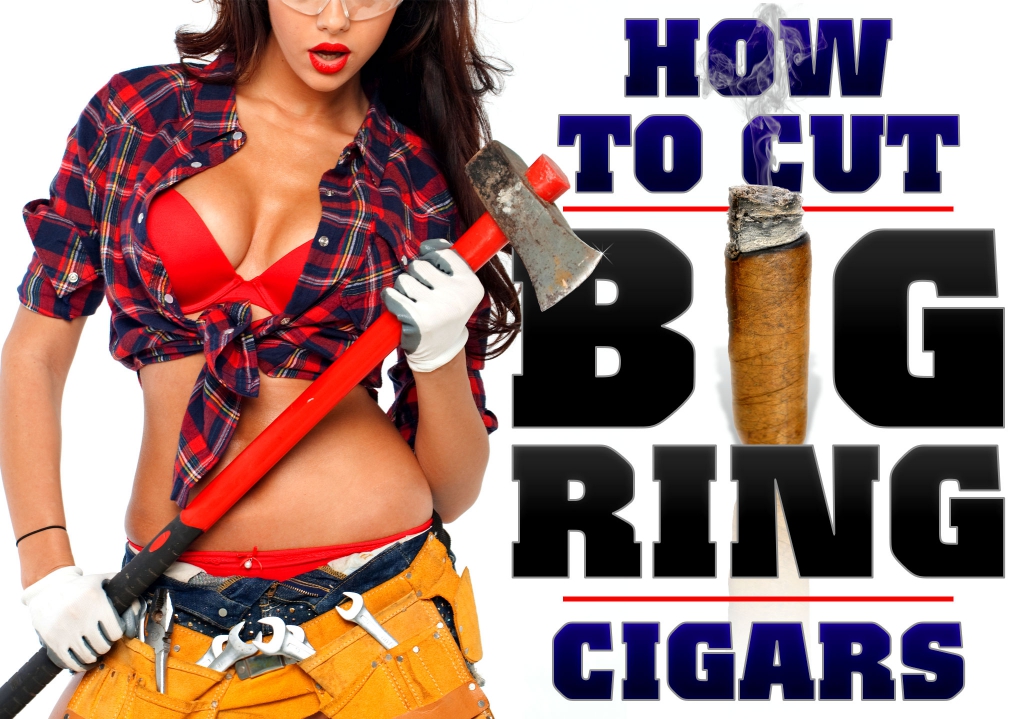 How to Cut Big Ring Cigars

Have you noticed anything different about many of the new cigars that have been released during the past couple of years? Whether you purchase your favorite smokes at your neighborhood cigar shop, or buy cigars online, cigar ring gauges ranging from 64 (1-inch wide) up to an 80 ring, and in some cases, even wider, have earned a cozy little niche in the marketplace. The question then is, how do you cut these telephone poles?

As far as cutting technique goes, the song remains the same. You want to cut above the shoulders of the cigar, where the head begins to round off.  However, in the case of selections like Asylum 13 “The Ogre” cigars, which includes a 6″ x 80 ring blockbuster, your average double-blade cigar cutter ain’t gonna cut it (pun intended). To answer the call, manufacturers like XiKAR have began making cutters with openings large enough to accommodate these pylons like their X8 series, which will cut cigars up to a 70 ring, and their 11mm Twist Punch cutter, the widest punch cutter in their stable which is just over a centimeter in diameter.

Because you need only cut the first few millimeters off the head of your cigar to get a good draw, many double blade cutters will still do the job as long as at least some of the head pokes through the hole.  Avoid using a double blade cutter that is only one sided, unless it’s made for extra large ring cigars; otherwise the cap will not go deep enough for the blades to make contact with it.

Yet, in the case of mammoth sticks like the INCH by EPC No.70, the 601 La Bomba “F-Bomb,” or box-pressed CAO Flathead “Big Block 770″ (all 7” x 70), there’s more than one way to skin these fat cats. Try using a pair of large cigar scissors. Though scissors aren’t as popular as other types of cigar cutters, they have the advantage of being able to cut practically any size cigar. It’s almost just as easy as giving the head a snip – but XIKAR’s Kurt Van Keppel has a tip on how to really do it properly:

For big cigars that fall below the 70-ring mark, such as the Gran Habano Corojo #5 “Czar” at 6″ x 66, the Quesada Oktoberfest 2013 “Uber” at 6″ x 65, or the San Cristobal Revelation “Leviathan” at 6½” x 64,  the average punch cutter will do the trick, especially if you do a figure 8 cut in which you make two punches, one above the other. Of course, this is a matter of how much draw you want from the cigar. In many cases, one punch may be enough.

In some cases, you can use one or more of the cutters you most likely already own. For big ring cigars with tapered heads like the nub Habano 464T torpedo at 4″ x 64, an ordinary V-cutter or a double blade will suffice because the head comes to a point.  Alec Bradley The Lineage cigars offer two missiles, the “665” at 6″ x 65, and the “770” at 7″ x 70. For them you need nothing more than any sized guillotine cutter, cigar scissors, or even a pen knife, because they’re finished with a Cuban-style pigtail cap, which only require a quick snip below the “knot” to open the head. In lieu of that, you can also twist the cap off with your thumb and forefinger.

Regardless of the size of a cigar ring gauge, it all comes down to your comfort zone. Everyone has their own way of cutting, lighting, puffing, etc. The cutting methods stated above for cutting extra wide ring cigars aren’t necessarily rules, they’re aimed at making your cigar smoking experience that much more enjoyable. Let us know if you’ve got a tip of your own for cutting super-sized smokes by leaving a comment.

Reading Time: 4 minutes Since this video debuted on St. Patrick’s Day, we asked Gary to review a green cigar. He chose the 5”x52 Illusione 88 Robusto Candela – a Nicaraguan puro made with Aganorsa farm-grown tobaccos. Watch Gary go Green with Illusione in his review!