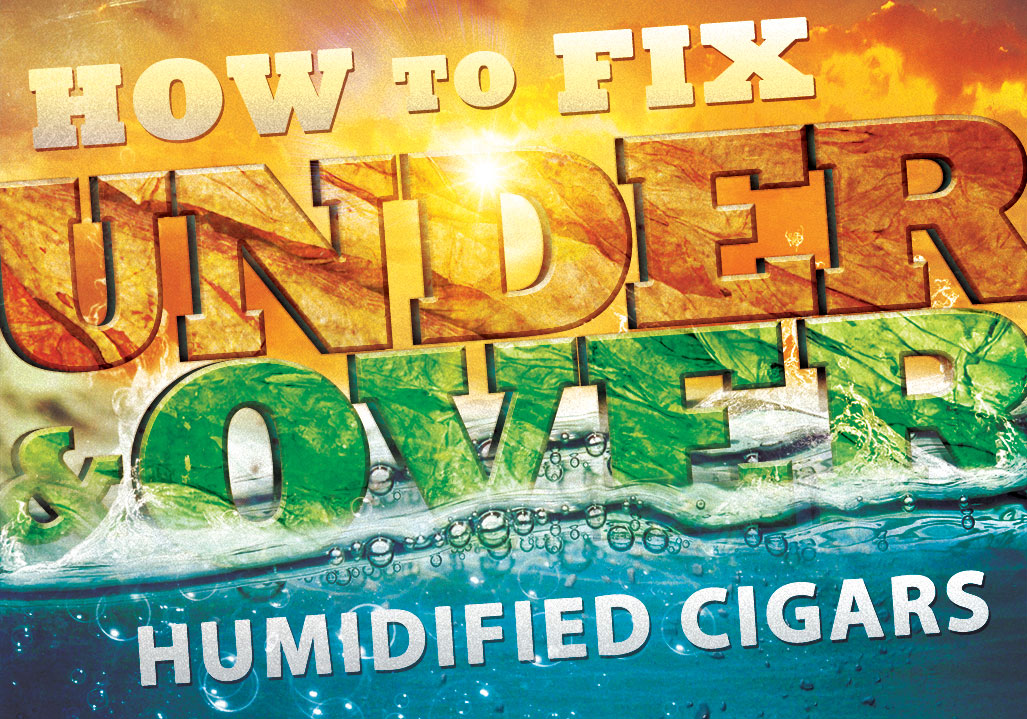 Being able to smoke at my desk makes work seem like I’m just hanging out in a cigar lounge with my buds, cracking a few jokes, and drinking top shelf juices, coffees, and waters. What, you thought I was going to say booze? Work may be fun, but it’s not get-brickhoused-by-noon fun. All in all, it’s a pretty rad job. But every once in a while, the unthinkable happens. I get a bad stogie. The cap cracks off, it burns like smoldering sage, burns uneven, or maybe it just refuses to light up at all. I just ran into the rare under/over humidified cigar! *DUN dun dunnnnnn…*

Why Does This Happen?

There are two reasons you may get a cigar that’s dried out or over humidified. The first may be because your humidor is holding too much or too little humidity. It’s important to recalibrate your analog hygrometer every 6 months or so to make sure it’s reading properly. If it’s not calibrated or maintained, you’re storing your cigars using false information which can negatively affect your stogies or even destroy them by being too humid or too dry without you realizing it. Without accurately monitoring your humidor, you might as well just start throwing money into the furnace, because eventually you’re going to ruin your entire investment of cigars. Prevention starts at home, people.

The second reason is shipping. Not from a cigar retailer, but from the factories. Cigar shipments get to retailers from South America at two speeds; fast as a rabbit, or slow as a snail that some devil children dumped salt on. Cigars that hit the warehouse from South America quickly are still somewhat over humidified from the high humidity at the manufacturer. Cigars that take forever typically dry out a bit while waiting for customs to clear them while they sit in containers that are not environmentally controlled. In either case, if a retailer gets a shipment in from a manufacturer and a customer buys that box the same day, the stogies have not had time to rest and acclimate to the cigar retailer’s humidity controlled warehouses before they ship out to you.

You pick out your favorite cigar, and you’re overjoyed that soon you’ll be puffing on the finest tobacco that you can get your hands on. “Kaloo! Kalay! Oh, fabulous day!” you proclaim as you click your heels all the way to your chair, begging you to lounge in it as a baby cherub would ever so gracefully on his fluffy cloud on high. You settle in, and you start the process:

*Whatever sound a lighter makes, only in words. I assume it’s spelled “KHUGHHGUHGHHHHHH!!!* – “That lit up easily! Smells harsh though.”

*More puffs* – “Ugh, it’s so bitter! Not only that, but it’s unwrapping on me because the damn cap came off!”

This, my friends, is the process we all experience when we have an under humidified cigar. If a cigar has low moisture content, it becomes brittle which makes it easier for caps to crack when you try to cut it, or even crack sometime throughout the smoke. Not only that, but it causes the tobacco to burn far faster than it normally would which will leave a bitter taste in your mouth and significantly shorten your smoke time.

So what do you do? If you picked up a sampler or box of cigars, and you notice it’s hard to the touch when you squeeze it, then you probably got some under humidified cigars. The solution is simple. Just take the dried out cigars and place them in your humidor so they can rest for a week or so. Let the cigars acclimate to the humidity you prefer, and it will ensure that each one of your cigars smokes like a dream. Sure, it may take longer than you expected for you to enjoy them, but it is well worth the wait.

*Freshly filled lighter sound* – “It’s taking a while to light. It must have some ligero in it.”

*Half filled lighter sound* – “Okay, maybe it has more ligero than I expected.”

*The last fleeting breaths of an almost-empty lighter* – “WTF?!? Still not lit?!?”

*Sound of unlit cigar hitting the bottom of a trash can* – “THIS IS BS!”

Over humidified cigars suck, and they cause all sorts of burn issues. It takes forever to light one up, and when you finally do, it either goes out or burns the edges faster than the core, leaving you what looks like the spire of the Empire State Building lit up in orange. Not only that, but once you do miraculously get it lit, the excess moisture expands within the cigar which can break the wrapper and puff up like a squirrel tail, thus ruining your cigar.

The fix is just a matter of drying them out, but the way you dry them out actually makes a difference. You can’t just leave them in a dry environment for a couple of hours and try to light it up. That only dries up the wrapper and binder slightly without drying out the core of the cigar. You have to acclimate the entire stogie so it’s equally humid throughout. The best thing to do is let it rest in your humidor for a few weeks.

Your humidor does a great job of sucking up extra humidity, and any extra moisture in your cigar will undoubtedly be soaked up by the Spanish cedar lining. After a while, your cigars will be smoke ready. If you feel it isn’t drying out fast enough, you can add in some extra pieces of Spanish cedar to help speed up the process. At the end of the day though, no matter how you go about doing it, make sure you bring down the humidity gradually. The expansion and contraction of the cigar through rapidly gaining and losing moisture can compromise the construction and destroy it. Being patient and allowing your cigar to reach optimal smoking conditions is well worth the wait.

So there you have it! Over and under humidified cigars are an easy fix. It just takes a little extra care and patience to resolve any issue you may have by letting your stogies rest. It also requires the proper tools to make sure you can monitor your stogies so you get them to the humidity level you prefer. Digital hygrometers, crystal humidifiers, or even Boveda humidity packs are great tools you can use to make sure your cigars are always smoke ready. Take care of your stogies, and you’ll always have a happy smoke.

Thanks for the advice

Very irritating read, just get to the point….

Popular Cigars: the 10 “Most Commented About”