How to Get Your Cigars Off to a Better Start 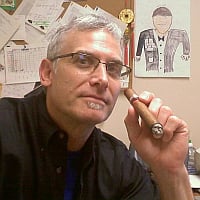 There are many different tricks and theories on how to light a cigar. I wanted to share one of my favorite tips that will help you get the most from your smoke. When toasting your cigars, etiquette dictates that you’re not supposed to let the flame touch the tobacco at the foot. Rather, the flame should be held close enough to the tobacco to get the foot glowing without it catching fire. Once you see red (so to speak), gently blow on the foot until the entire surface is glowing all the way out to the last ring.

During this process it may appear that the entire foot is lit, but that’s not always the case. Some people are impatient, and once they see “the glow” or a flame shoot out of the end of the cigar, they figure that’s it. However, when the foot is only partially lit, you generally have to hit the foot in the spots where the leaf is still black. These black spots are often ligero leaves, which are the darkest and oiliest, and therefore the hardest to light. Once you apply more heat to the cigar, the more tars can form.

If you use a torch lighter, the flame is so concentrated you can hold the tip of the jet far enough away to touchup the remaining tobacco without worrying about over-lighting. Try it. The next time you light a cigar, apply your torch flame to the foot, start where you normally would, then slowly pull the flame away. You’d be surprised how much distance the heat from a torch flame can travel. Once you’re satisfied the foot is properly lit, here’s a little something extra you can do to help it burn more evenly:

As I noted above, get a good toasting going then blow on the foot of the cigar until it’s all red. It’s important to blow gently because, like reapplying the flame, you don’t want it to get too hot. But don’t stop there. If you did a good job in this respect, keep blowing gently on the foot until you have about an eighth of an inch or more of ash. Blow out through the cigar to expel any tarry smoke, then take that first puff. If you can get the ash going well at the start of your smoke, it has a better chance of burning evenly all the way through. The process does take some extra time and patience, but it’s worth it.

For more tips like this on how to light a cigar, check out the Lighting section of Cigar Advisor’s Cigars 101 instructional series!

Good advice, it worked for me.

Excellent advice on getting a good toasting going. The etiquette isn’t important to me, it is the functionality of this advice that leads to a better smoke that I care about. Thanks!

Excellent advice on getting a good toasting going. The etiquette isn’t important to me, it is the functionality of this advice that leads to a better smoke that I care about. Thanks!

Thanks for the positive feedback.
G~

Obviously not you, knucklehead. If you want a cigar, just open my hudmior and take whatever you want. I was just sort of ranting about some turmoil at my work.

Obviously not you, knucklehead. If you want a cigar, just open my hudmior and take whatever you want. I was just sort of ranting about some turmoil at my work.