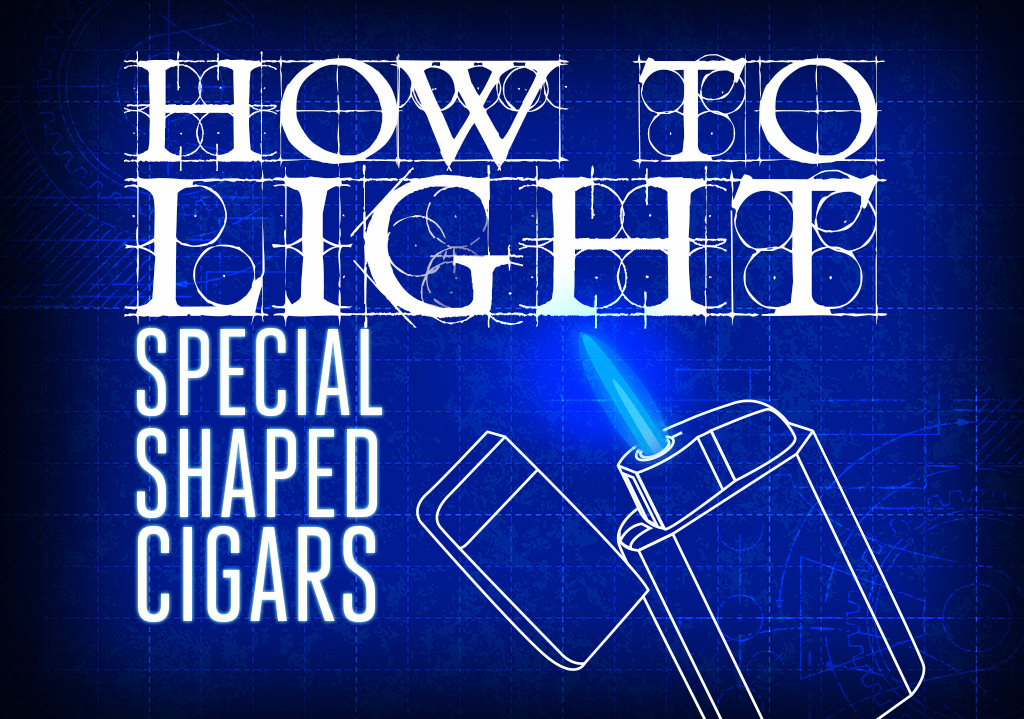 I’m a sucker for cigars that look like a roller went on a bender and banged out a few funny looking stogies at his station. Luckily for the roller, the floor manager loved all these oddly shaped cigars and thought this crazy party animal was a genius, thus starting a trend. Lesson? Benders drive progress. That’s why I’m writing this live from my week long bender. The only downside is now I have to add fire to them. Luckily, alcohol further fuels my blatant disregard for my eyebrows and amplifies my stubbornness to get the fiery job done.

Okay, I’m not really on a bender or I would most certainly be fired by now. Frankly, HR couldn’t handle that many harassment complaints in a half hour, and Hallmark doesn’t produce that many “I’m Sorry” cards. But I do have a few funky looking special size cigars at my desk, and it dawned on me that some people may need guidance on how to light them up. That’s why I’m taking it upon myself to do some intense, soul-crushing work by lighting up each one to find the right way to fire each of them up.

Did you honestly think I was going to swan dive into an empty pool? We need some perspective before we move on, so bear with me. There are a few ways to light cigars, and I’m sure if you click here now, I’ll link you up to our YouTube page to show you a few videos on how to fire one up. But for all of you that seem to hate YouTube, let me break it down for you like Biggie.

I’d give you the “Rapper’s Delight” overview, but it would be too long. Typically you would use a torch lighter, but matches and cedar spills work just as well. With a torch, you roast the end, and then puff and turn until fully lit. Matches and cedar spills follow the same concept, only you can’t roast the cigar. It’s just a matter of puff and turn. The main rule of thumb however, is to never let the fire hit the tobacco directly. This causes excessive burning and a real bitter/ashy taste to develop. Gradually lighting your cigar is the way to go. Your stogie should never look like it’s coming in for re-entry.

Perfecto cigars are designed with an interesting concept in mind: light a small area that will widen. Small ring gauge cigars have a tendency to correct themselves, while bigger cigars burn a line like a pirates treasure map. The nipple at the foot of the cigar will promote an even burn as it transitions to a fuller cigar. But people tend to go at Perfectos from an angle with their lighters which can burn the wrapper further down the cigar causing it to canoe. To prevent this, light as you normally would, but make sure the heat is directly applied to the nipple. Also, make sure you don’t over puff. You have a small area to work with. Just light the tip, lightly draw, and let the ember do the rest.

Yes, box pressed cigars make the list for one reason and one reason only- the corners. Burn a corner prematurely, and you may as well toss the cigar. These bad boys can be a pain to keep a straight burn going as it is. Lighting it wrong isn’t doing your smoke session any favors. Just like a perfecto cigar, make sure the heat stays on the foot of the cigar. However, because of its design, it’s hard to puff and turn to promote an even burn. Instead, take a few puffs, then rotate your cigar ¼ of the way around, take a few more puffs, and so on until completely lit while avoiding extra heat on the corners.

Pyramid cigars are the antithesis of the Perfecto. Each starts out large and gets smaller as you smoke, so burn issues are more common right off the bat, making it more imperative that you don’t mess up the light. Because there is less than a 90 degree angle at the foot, if the tobaccos on the fringe are subjected to excess fire, it will burn far faster than the rest of the foot causing it to canoe. Keep the fire more centralized when you start lighting and work your way out to the edges. This will ensure that you burn the tobacco in the center first with the outer tobaccos catching up as you smoke.

Wafes are cool, but I’ve only seen one or two manufacturer make these. I personally love these little guys because they’re flavorful stogies that provide a short smoke while feeling comfortable in your mouth. But to get to the flavor, you need to light them, and their design simply sucks when it comes to adding fire. The best way to light one is to start at one side and puff your way over to the other with a consistent heat. It may burn slightly angled at first, but the small size will correct it fairly fast. Just keep in mind while smoking to turn the cigar over after every few puffs to ensure an even burn.

No matter what kind of cigar you like, you need to learn how to properly light it up. As we travel along this journey through the cigar world, trying as many as we can along the way, palates can be interfered with through poor burns, thus giving unbalanced flavors. If you don’t light your cigar properly, you’re not fully experiencing the cigar you hold in your hand. For all you know, you’re smoking your new favorite cigar, but because of a bad light, you think it’s garbage. Remember to light up properly, take your time, and enjoy the heck out of each and every stogie.

Any suggestions along these lines for the Drew Estate Egg?

Reading Time: 7 minutes The Gran Habano name doesn’t often come up in conversation, but the loyalists know how good they are. GH’s latest, and the subject of our Blue In Green cigar review, was inspired by George Rico’s favorite Miles Davis composition; But how jazzed up did we get over this cigar? Watch now and see…

2015 CA Report: 9 Expensive Cigars That Are Worth It

What Gives a Cigar Complexity?