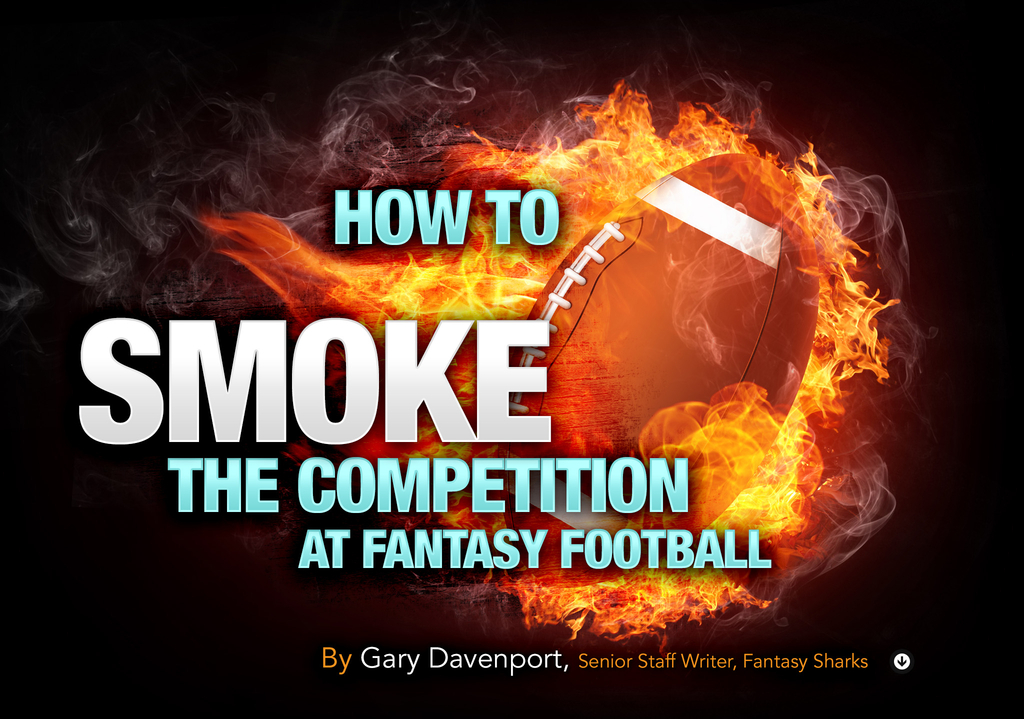 How to Smoke the Competition in Fantasy Football

Fantasy football has grown from a diversion invented in an Oakland hotel room in the 1960's, to an obsession played by over 20 million people annually. It's become a billion-dollar industry that has spawned hundreds of websites, magazines and even a sitcom (albeit a terrible one). According to The Denver Post, a study concluded that American employers lose over $6 billion dollars a year in lost productivity to employees managing their fantasy teams “on the clock.”

Yeah! Stick it the man! (Unless you're “the man”, in which case how dare those deadbeats!)

Whether you're a first-timer still trying to get the hang of things or a grizzled fantasy veteran, playing for bragging rights or some delicious cabbage, here's a look at some tips and pointers that will help lead you to a fantasy championship.

This one may seem like a no-brainer. However, it never ceases to amaze me how many fantasy owners torpedo their teams right out of the gate by making assumptions about the scoring and roster requirements that end up being wrong.

After all, you know what they say about assumptions.

Before your league's draft, take a few minutes to review the rules and how they could impact strategy. If passing touchdowns are only worth four points that devalues quarterbacks. If your league requires three starters at wide receiver and awards a point for catches, then wideouts get a bump. You need to know this stuff before you draft. 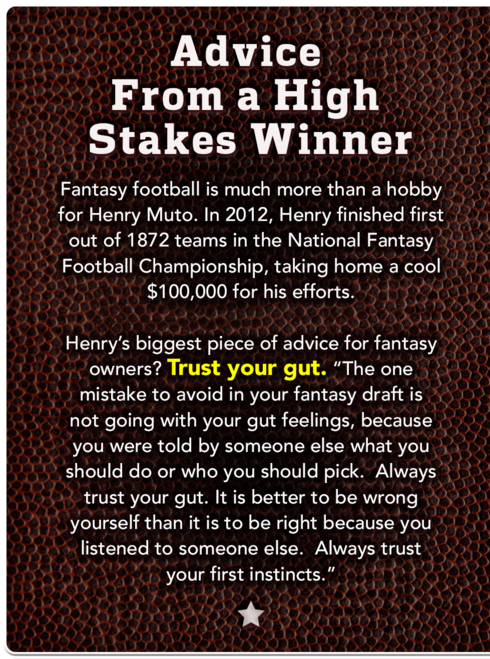 Over the past few years, as the NFL has become more and more pass-heavy, many fantasy football “experts” have declared that the “old school” strategy of taking running backs with your first two picks was dead and buried.

The running back position is as valuable as it ever was, because the number of “elite” backs that can be trusted week in and week out has continued to shrink. Not only that, but the drop-off from the #1 running back to the #20 running back is significantly greater than the same drop-off at wide receiver. 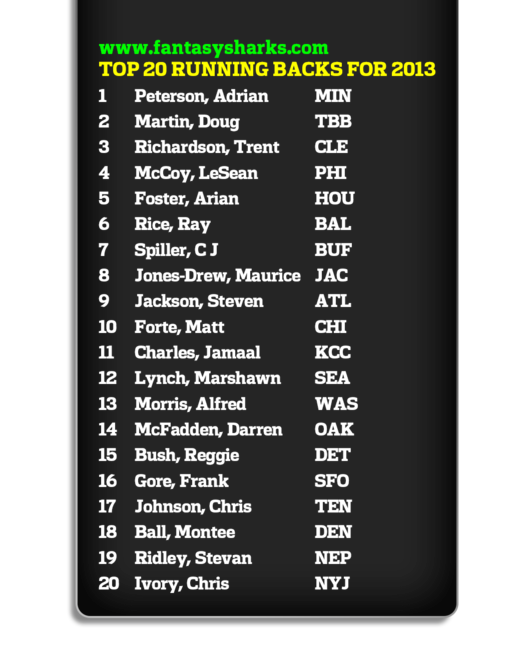 Just as there are fantasy experts who advocate loading up at wide receiver early, there are also those who are proponents of burning an early pick on an elite quarterback such as Aaron Rodgers of the Green Bay Packers or Drew Brees of the New Orleans Saints.

Using that early pick on a signal-caller will leave you chasing your tail at running back and wide receiver, and the quarterback position is deep this year. The edge you would gain at quarterback isn't worth the hit you'll absorb at another spot. Not in a year when you can wait and still get a player like Tony Romo of the Dallas Cowboys as your starter.

If you're going to spend a pick in the first five rounds on a guy who isn't a running back or wideout, make it tight end Jimmy Graham of the Saints, who appears to be the top option at his position this year by a wide margin. 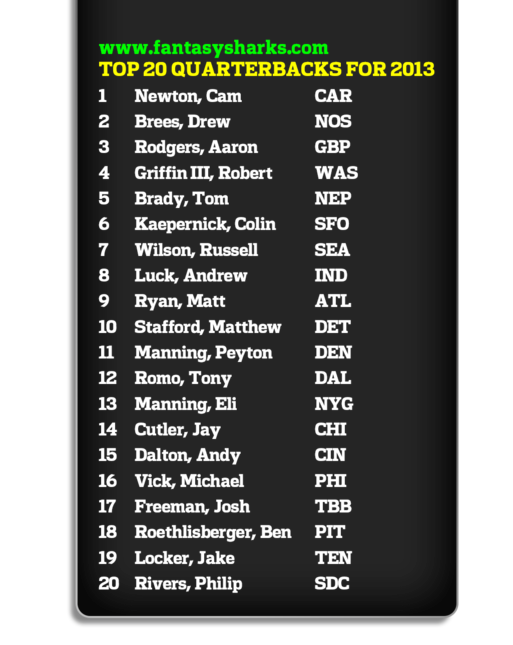 Wait Until Late to Take a Defense and a Kicker

Team defenses are wildly unpredictable from one year to the next. Personnel and scheme changes can have a huge impact. In most fantasy leagues the position gets a lot of its scoring from turnovers and sacks, which can be “fluky” stats.

Rather than burn an early pick on a so-called “elite” defense, wait and grab a team like the New England Patriots that has favorable matchups for the first couple weeks of the season. When the tasty matchups dry up, just cut them loose and grab another defense facing a lousy team that week. Rinse and repeat all season long.

Don't draft a kicker before the last round. 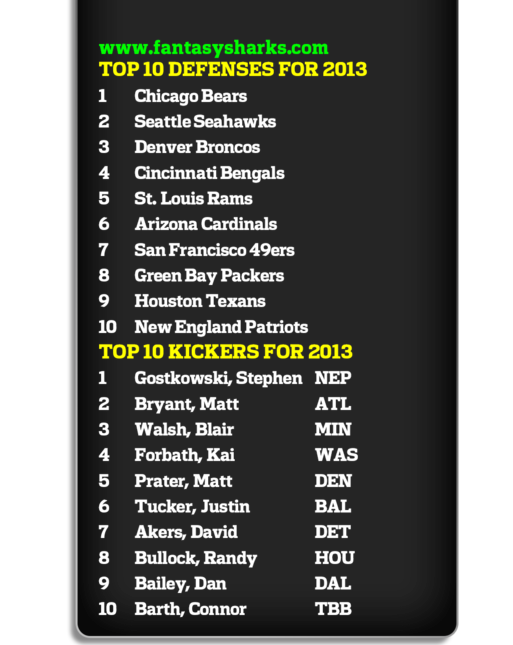 The first team to draft a kicker is the object of scorn and ridicule on draft day. Unless you're starved for attention and will take it any way you can get it, don't be that person. 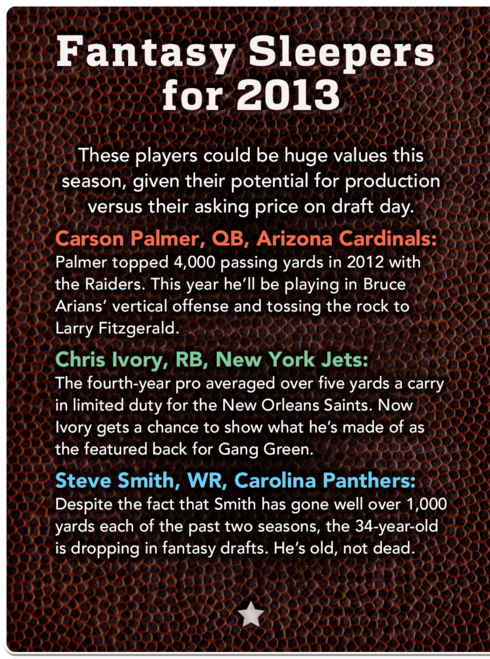 The team that has the best draft often isn't the one who wins the championship. Be ready to swap out underperforming players for emerging stars on the waiver wire. Make an effort to improve your team with a trade or two. If all you do is set your lineup once a week, odds are the only thing you'll win is a mailbox filled with smack talk from league mates after they've knocked the crap out of you.

Fantasy Sharks offers a ton of information both before and during the season to help you dominate your league, from cheatsheets and weekly rankings to waiver wire and start/sit advice. It's all free, so it's not like you have anything to lose by availing yourself of the info.

Gary Davenport is a Senior Staff Writer at Fantasy Sharks, an NFL and Fantasy Football Featured Columnist at Bleacher Report, and an Associate Editor and Contributing Writer at Football Diehards. A member of the Fantasy Sports Writers Association and 10-year veteran of fantasy football, Gary has also been featured in a number of nationally syndicated publications and makes regular radio appearances, including weekly spots on 930 AM in Jacksonville, Florida and on Sirius XM Radio. If Gary isn’t playing fantasy football, he’s writing about it or thinking about it. He knows that’s sort of sad. He just doesn’t care. It sure as hell beats digging ditches for a living.

Reading Time: 10 minutes They are the Kings of the Humidor – but what goes into making top shelf cigars? For these 12 cigar makers, it’s the best tobaccos they’ve got…along with all the extra little details that make these cigars something special. If you’re looking for your next special occasion cigar, or you just want to smoke like royalty for the day – start here with these blue-chip cigars.