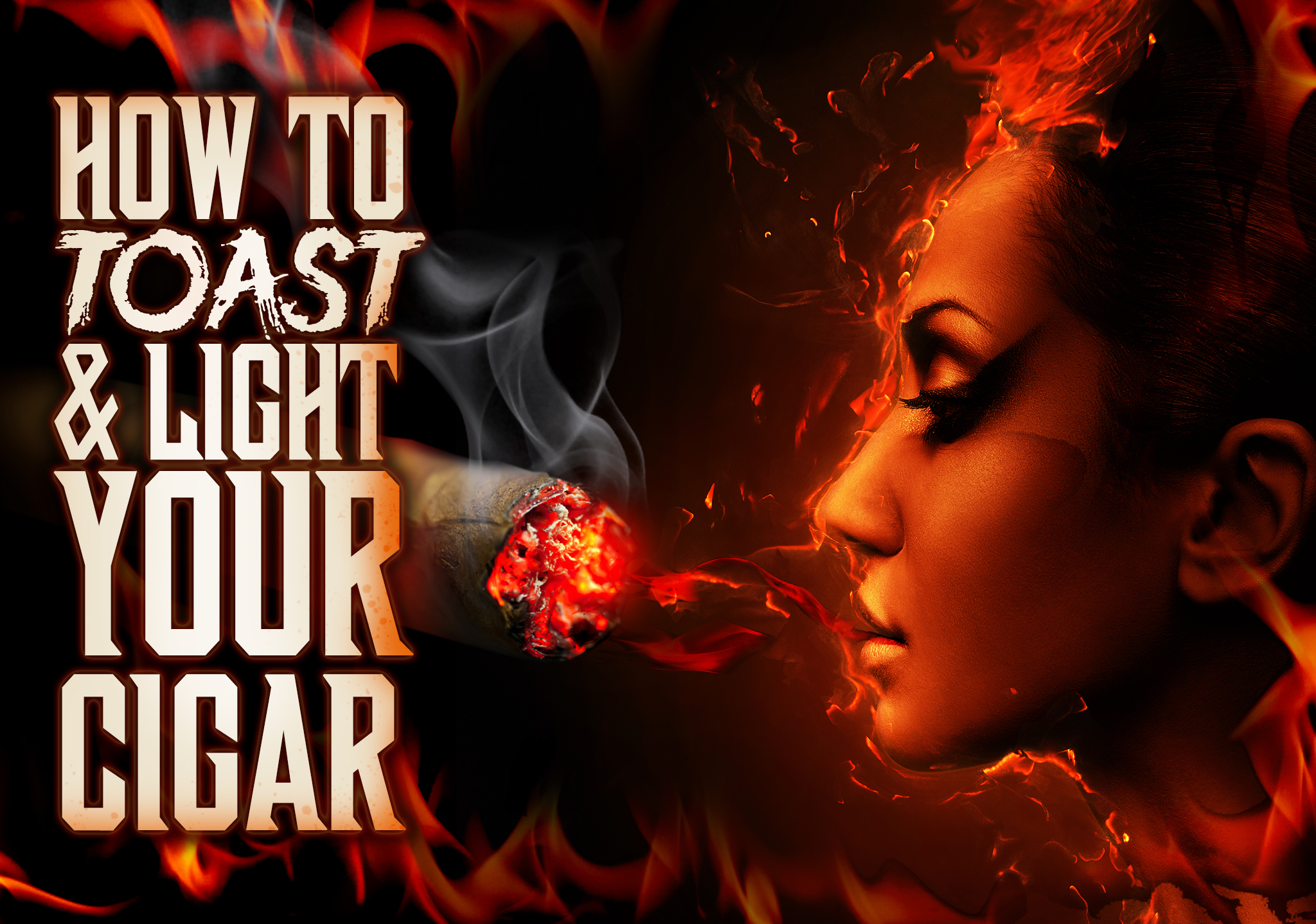 How to Toast and Light A Cigar

We’re supposed to kick back and relax with a good cigar – but that R&R goes right out the window if your cigar starts to tunnel, canoe, or worse (and yes, there’s worse). No worries: take these easy steps, and you’ll be back on the path to smoky happiness in short order!

If you want to know why your cigar isn’t burning properly, you might start by asking yourself, “How do I light my cigar?” While there isn’t really just one “right” way to light a cigar, there sure are many wrong ways that will keep the magic from happening. So here’s a truth: if you’re going to truly enjoy smoking a cigar, it’s worth your time to light it slowly, and light it properly. And that involves toasting your cigar. We’ll go into how to toast and light a cigar.

How to Toast a Cigar

Admittedly, the jury is still somewhat out when it comes to toasting. Not all cigar smokers do it, but those that do – myself included – have found that a nice, slow toasting on the foot of the cigar can get the ash going well at the start of your smoke, which then has a better chance of burning evenly all the way through. The purpose of toasting is to set fire to not only the filler, but binder and wrapper as well. Without toasting, you’re likely to only ignite the filler and immediately start an uneven burn; in this case, tunneling.

So here’s how to toast a cigar:

Hold the cigar at an angle (I say 45-60 degrees, but whatever is comfortable for you) over the flame, and keep the foot of the cigar a couple inches above the flame. Keep in mind, I’m using a torch lighter – it’s easier for me to control. Important: don’t let the flame actually touch the tobacco at the foot. Instead, hold it close enough to get the foot glowing, without it truly catching fire. Some rotate the cigar until the foot begins to ignite; but since I’m using a torch, I can aim the flame wherever it needs to be.

Watch the height of your lighter: you’re not welding a bridge, you’re lighting a cigar. Turn the flame down just enough to get the job done, so you don’t overheat the cigar.

Check out the foot of your cigar – is it burning evenly? Often, it appears that the entire foot is lit – but that’s not always the case. Though you may want to hit it again with your torch and touch up the black spots, hold your fire: the more you heat the cigar, the more tars can form. Instead, gently blow on the foot until the burn is even.

With a good toasting in progress, gently blow on (or even across) the foot of the cigar until it’s all glowing red. You can even keep blowing gently on the foot until you have about a 1/8” inch of ash. It’s important to blow gently because, like applying fire, you don’t want it to get too hot. Handmade premiums = delicate.

Once the cigar is completely toasted, let it sit for a minute to stabilize…meaning that the wrapper, binder and filler are all lit, and the burn is even – then take your first puff. Some even do a gentle purge before that first pull, just to clear the body of the cigar of any smoke and get a fresh, full draw.

Because your cigar is burning evenly from the beginning, it should be less likely to tunnel or canoe. And construction issues aside, a good toasting method will leave you holding a delicious, well-lit and nicely burning cigar with good smoke production. You’ll also get an extra shot of the cigar’s aroma before you even take a puff. While toasting takes extra time and patience, I say it’s worth it.

Watch Nick Perdomo owner of south Florida’s Tabacalera Perdomo, give his expert opinion on “How to properly light and toast a cigar”. Perdomo makes more than the finest, premium, hand rolled cigars in the world. They’ve created an ongoing legacy of Distinction,Quality, Tradition, and Excellence from generation to generation.

I have been doimg it wrong for too long,thanks Nick for the Tip!

jfc, HOW HIGH DOES HE HAVE THAT LIGHTER??? iS HE WELDING A BRIDGE???lol>

Your web blog is really interesting and beneficial. Thanks for sharing such an awesome blog.

Perfect descriptions of the entire process!
Thank you for the info Nick!

and JOHN, of course.
Thank you John.