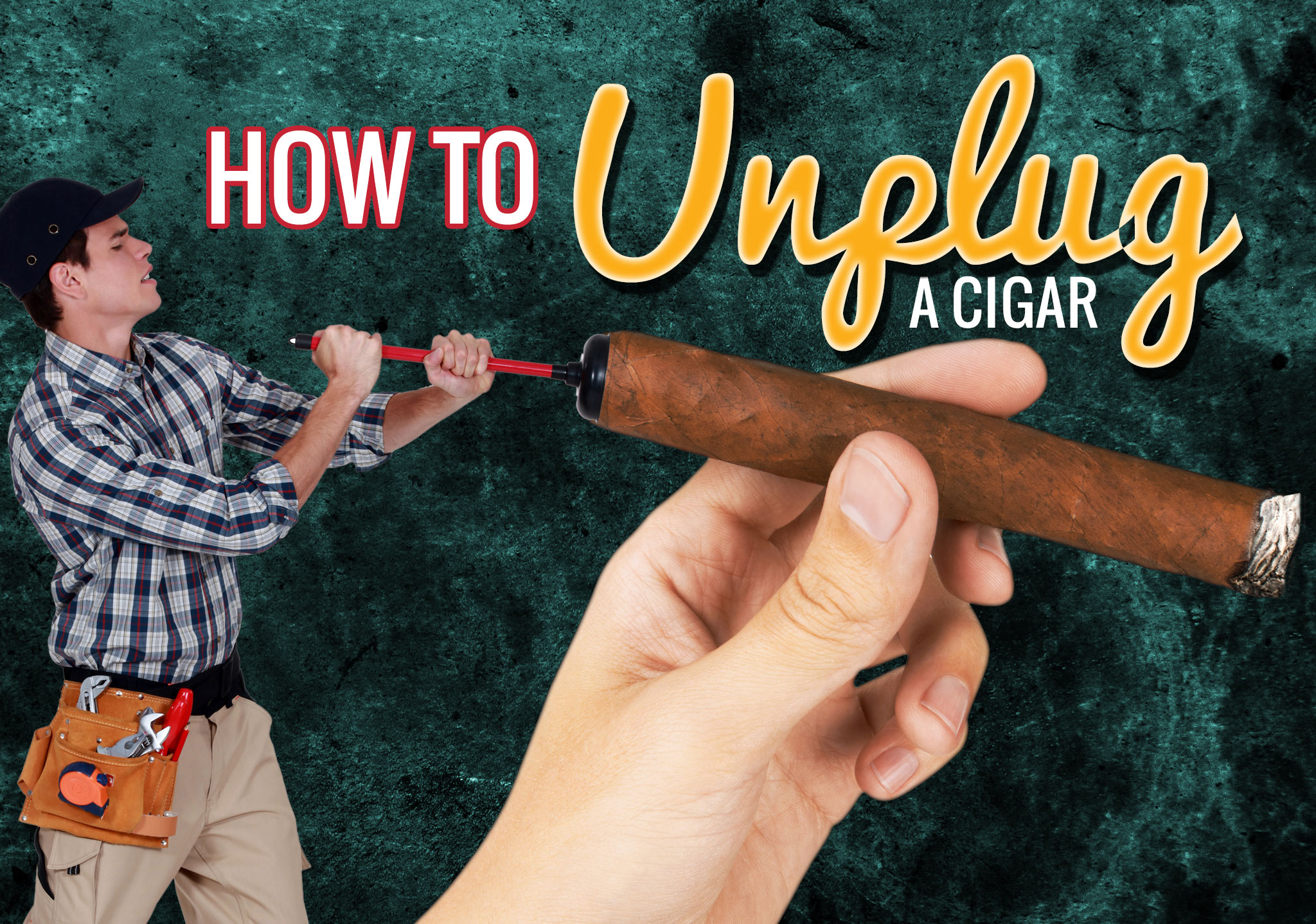 How to Unplug a Cigar

It happens, and fortunately it happens rarely; but when it does there are few things in life more irritating. I refer to the odd, plugged cigar. Nothing is more of a buzz kill than lighting-up one of your favorite cigars only to realize you’re probably going to need a shop-vac to get any smoke out of it. Since it’s more the exception than the rule, cigar smokers aren’t usually prepared to deal with a cigar that refuses to let go.

The question is, what do you do when it happens? Depending on where you are, like away from home, you may not have the necessary tools handy to deal with the situation. I’ve read a lot of emails in which the “victim” simply trashed the cigar. Even more upsetting is reading that the majority of the box or bundle was plugged.

Although it may be necessary in some cases, trashing a plugged cigar doesn’t have to be the only option. There are a number of products on the market to help unplug a cigar that doesn’t draw properly. My theory is, even if the tool doesn’t solve the problem, it’s always better to try than give up.

One of the most popular un-plugging tools – and arguably, the best designed for fixing plugged cigars because of it’s serrated edge – is the Havana Saver. It’s a lot like an ice pick, but the needle is twisted to help slice through the tobacco leaves going in and coming out. And because it’s smaller in size, it works just as well on smaller cigars, which is a nice plus. One piece of advice: If you’re traveling by plane, leave it home or put it in your check-on, because TSA will snatch it up in less than a nanosecond.

The one thing to be aware of when using a tool like this to unplug a cigar is you have to have a surgeon-like approach. Work slow and steady. Many a cigar that could have been saved has been toe-tagged DOA because the tool was inserted too quickly and either caused the cigar to expand and tear the wrapper, or it popped out through the side of the cigar. Oops.

I advise starting at the foot, and try to center the needle as best you can. Work it in slowly while turning it, and don’t push your luck. Get as far as you can, then remove it and try puffing. If it hasn’t improved that much try doing the same starting from the head. If the plug is in the middle, you could be out of luck, though the Havana Saver is designed to ream the entire length of the cigar.

There’s often no need to buy a tool at all to unplug a cigar. Sometimes all you need is a large paper clip or an ordinary toothpick. Believe it or not, while writing this article I had a plugged cigar and I used a mini screwdriver that I keep around for adjusting and bleeding my cigar lighters.

Cigar smokers are also very resourceful. If you follow Cigar Advisor, some of the solutions offered by the readers in the Tips section range from using a small drill bit to a three-inch drywall screw to unplug a cigar. Just remember, the thinner, the better. Moreover, the advantage to the drill bit and the screw is, like the Havana Saver, they also chew up some of the surrounding tobaccos.

One last piece of advice: Regardless of the tool you use to clear the plug, if you get even a little more relief from the draw, try to stay with it. You may find that eventually the cigar will burn past the affected area and clear up on its own.

It may also be that the “plug” or hard draw is the result of the rolling style (at the cap end) of the [roller]. I experience this problem almost always with RyJ cigars which ship very wet, and even after proper humidification, still draw poorly. Simply trimming the cap much deeper than usual helps a lot. Just keep taking a little off and eventually the draw may improve. Trying this first avoids the risks that go with using a poker.

Although you might be onto something here, there’s only one drawback to your solution. If the cap is clipped too far, you risk the wrapper unraveling. I’m also surprised to read that this is happening with RyJ cigars. I’d be curious to know if it’s a specific line extension, since I can’t remember the last time I had a problem with any Romeo y Julieta. Thanks again for the comment.
~ G.K.

I’ve never had a wrapper unravel, even after clipping as much as 1/2 inch plus. I admit that the edge that results from cutting deep is not as pleasant to the lip as the round of the cap but it’s a small price to pay when compared to the frustration of dealing with poor draw.
What constitutes a decent draw is subjective. I have a buddy who smokes RyJ 1875 Churchill tubos, 3 a day. He’s amazed that I, smoking the same cigar, think the draw is tight. I have found that the Altadis offerings have been for the most part much tighter, frustratingly so, that say La Aurora or Fuente etc. I smoke H.Uppman (also Altadis) Vintage Cameroon, 2 a day, and most sizes are unacceptably tight. Someone at the Fuente cigar forum mentioned the deep trim and it has really helped.

When I get a plugged cigar, I will usually cut the cigar down to where the plug is, basically getting rid of the plug and now having a smokeable cigar. If it is in the center, I will cut it down (lately I have been smoking double coronas, so I end up with at least four inches of smokeable cigar ). I’ve found using a draw poker that it never worked, the cigar would still be plugged. What is worse than a plugged cigar is a cigar that is rolled too tightly. That makes it totally un-smokable with nothing that you can do about it at all.

MICHAEL ELLIOTT, HOW CAN YOU SAY THAT CLIPPING THE CAP OF A CIGAR TO FAR WILL NOT MAKE IT UNRAVEL. THE CAP IS THERE TO STOP THE WRAPPER FROM UNRAVELING. CUTTING THE CAP TOO MUCH WILL DEFINITELY MAKE THE WRAPPER UNRAVEL, IT HAPPENS ALL THE TIME TO THE BEST OF US! YOU SHOULD LEAVE AS MUCH OF THE CAP ON THE CIGAR AS POSSIBLE WITHOUT AFFECTING THE DRAW.

Check out Plugged Cigar Tool on Ebay and You Tube. Removes tobacco from cigar.

I use the paper clip trick, sometimes it may take a few times working it thru the plug but eventually I can usually get an acceptable draw.

I tend to use a small drill bit to unstick my tight smokes. It seems to keep them from busting the wrapper open since it actually drills a hole instead of just expanding the cigar.

A small kebab stick works just fine. By carefully centering and inserting the stick it may be run through the full length of the cigar, providing a light draw.

That’s true. Just about anything long, very thin and sharp will do. What’s nice about a drill bit or screw is that they actually cut away some of the tobacco when removed, but as I always say, whatever works.

The first thing I do with a plugged cigar is let it rest out of my humidor for a couple of days. This usually improves the draw. If it’s still plugged, I use a five inch industrial sewing machine needle set in a wood handle to probe for draw.

Very helpful,however, haven’t had a plugged cigar in years.got burnt on a box of cohibas(Cubans via Mexico)1997.

I have been experiencing this too with Quorum Churchills for the last 6 months or so. It appears that the factory is rolling them to tight. Out of the 20 pack I probably 10 that are wrapped really tight. What I generally do is to mush (lack of a better word) between my thumb and index finger to loosen the roll up a bit. If that doesn’t work, I use my 7 inch section from a clothes hanger and run it down the middle of both ends. Thinking about getting an ice pick to replace the clothes hanger section. Just be careful to to break the wrap when poking into the cigar.

Is a cigar’s price related to its strength?

What’s in a Name?