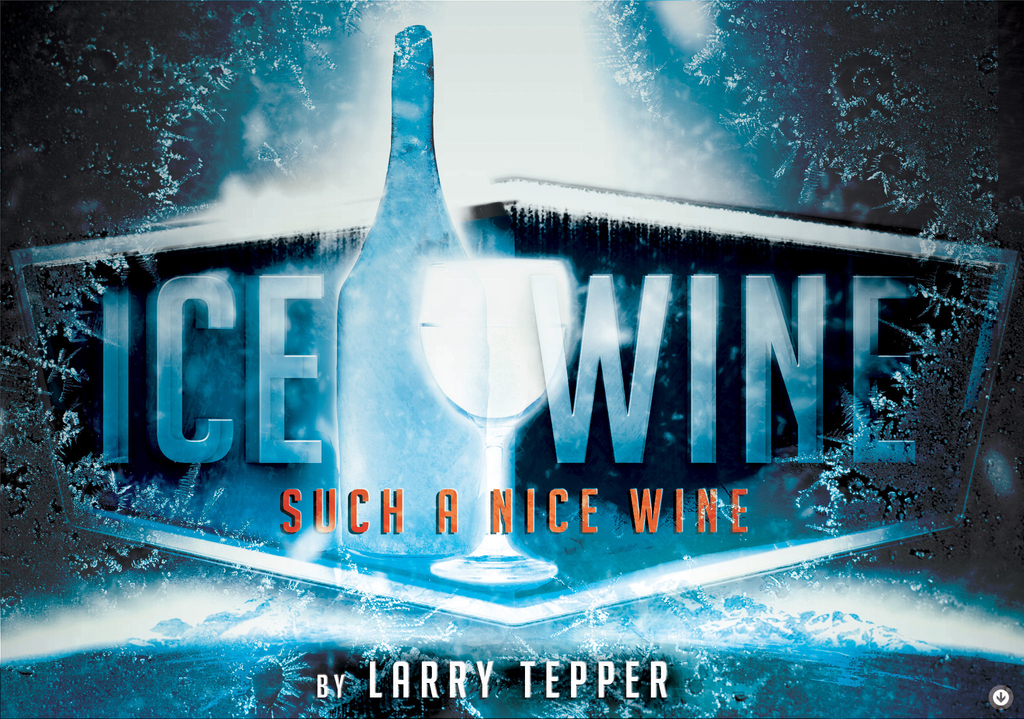 Ice Wine: Such a Nice Wine

There was talk at the office. Someone at the Monday meeting (back in Pennsylvania) said that “Ice Wine goes well with cigars.” Being the go-to-guy for wine and cigar affinities, naturally that statement got back to me on the West Coast. I’m going: “Wha…?”

What makes me think that? The simple answer is: rarity. Ice Wine is a rare, exotic, expensive and really hard to find specialty item. You may never have even seen a bottle, and if you did, the price might have made you slip right on by. And on top of everything, even if someone touted you on it as the best sweet white wine you will ever taste, you probably turned heel and all but flew out of that aisle. Who drinks sweet white wine nowadays? Sweet white wine is so gauche.

Okay. So, when I tasted Ice Wine did I like it? Yeah, very impressive. Did I think, “Wow! This would really go good with a cigar.” It never occurred to me. Not even for a second. Why? Well, let’s go back to our original question:

What is ICE WINE?

It all started in Germany probably centuries ago. Someone left the grapes too long on the vine-oops!-and they froze. An honest mistake. Growers here must leave grapes hanging much later than in other more temperate regions. Either that or fail to attain the high sugar levels required to produce the luscious, complex, moderately sweet wines for which Riesling-and the many Riesling-like hybrids-are so world famous. 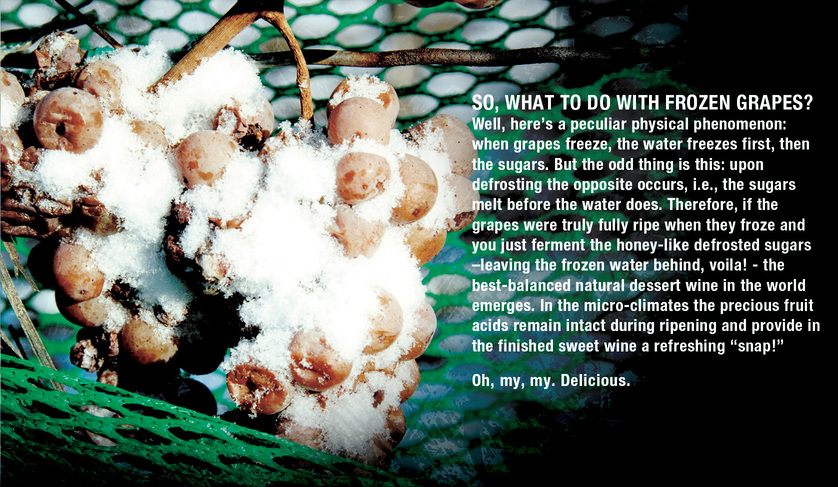 So, what to do with frozen grapes? Well, here’s a peculiar physical phenomenon: when grapes freeze, the water freezes first, then the sugars. But the odd thing is this: upon defrosting the opposite occurs, i.e., the sugars melt before the water does. Therefore, if the grapes were truly fully ripe when they froze and you just ferment the honey-like defrosted sugars –leaving the frozen water behind, voila! – the best-balanced natural dessert wine in the world emerges. In the micro-climates the precious fruit acids remain intact during ripening and provide in the finished sweet wine a refreshing “snap!”

Perfect conditions for Ice Wine production occur in Germany only about two or three times per decade. So, they are particularly scarce. But guess what? Ideal conditions prevail almost every year in Canada’s Niagara Peninsula. What was once a cottage industry there has grown into a major enterprise: Canada is now the leading producer of Ice Wine on the planet

A few years ago, when these rarities were striving to gain a foothold in the American market, an importer brought me some impressively delicate, sweet and delicious samples. Offered in 375 ml formats they retailed for $39.00, $59.00 and $69.00, depending on the type of grape used.

“Why do they cost so much?” I naively asked.

“You see that bottle,” he replied, pointing to the most expensive half-bottle, the Riesling, “It takes 66 pounds of grapes to make it.” Oh.

Well, I would imagine that to cap a fine celebration dinner, or in the company of a lady friend, who would just melt like sugar after the first or second sip, these exotic wines would be just perfect, but with a cigar? How could anything so subtle and delicate stand up to the bold flavors of even a mild cigar? What I had failed to consider was the intense richness and depth of flavor that these wines offer. I had to try it.

A while back I had spotted an authentic German Ice Wine at Trader Joe’s for an amazingly low $19.99 per half bottle but cavalierly I didn’t buy it right then. Big mistake. When I went back to score, of course it was all gone. And then I couldn’t find any Ice Wine at all anywhere. I searched and searched. I did see some listed at $149.00. Ooo, ouch, that wasn’t for me. Finally, at “BevMo” an “affordable” bottle showed up: from Canada a Jackson-Triggs 2008 “Vidal” (which is a French/American hybrid) on sale for $23.99 for a 187 ml bottle. Yes, that’s right: a ¼ bottle size… whose regular price is $29.99!

What I also discovered in the same shop was a 375 ml bottle of Washington State faux Ice Wine. And what is that, you say? Well, the fanatics at the Pacific Rim Winery in the Columbia Valley have been focused on perfecting a $13.99 flavor bomb called “Vin de Glacier” for several years now and fooling Mother Nature nicely. To craft this delicious stuff they take very, very ripe Riesling grapes and put them in the freezer!

Off to a good start, I picked up a bargain bottle of Italian Casal Nova Moscato 2010, sporting a whopping 4.5% alcohol, for just $6.99. I was banking on enough residual (read “unfermented”) sugar in this wine to do the trick.

A trip to another fine wine shop yielded a reasonably-priced half bottle of a 2010 white Bordeaux Sauternes ($13.99) named “Petit Guiraud.” 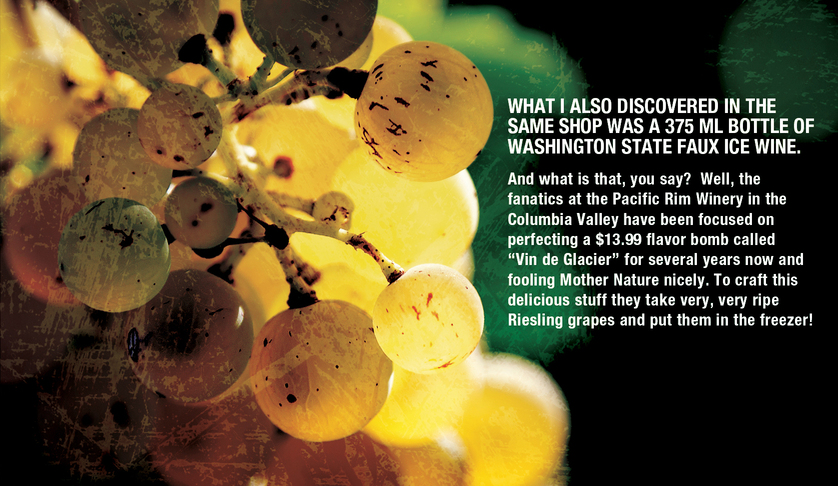 And at Trader Joe’s I really scored with a half bottle of authentic German TBA for only $14.99! And what is that, you say? Well, “TBA” is an abbreviation for a 20-letter-long German word which when translated tells us that this wine was made from individually selected, shriveled-up grape berries which had been “attacked” by a mold called “Botrytis.” Juice from these grapes yields a very sweet wine with a marvelously complex honey-like aroma. TBA wines are typically priced at $75 to $300 each. But this one, a 2006 half-bottle made by the venerable German firm ANSELMANN, at less than $20.00, was a real coup. A steal. The wine earned four major international Gold Medals. Now I was all set.

The results of all this: Very satisfactory indeed. My only actual disappointment was with

the Bordeaux. And don’t get me wrong: Petit Guiraud is a very good wine. I just found that it does not go well with a cigar. It was fermented out to a full 13½% alcohol content. The other wines here benefit from fermentation arrested at about 8% to 9% alc., a technique which leaves gobs of succulent unfermented sugar in the wine. To me this Sauternes did not deliver enough sweetness to complement a cigar. It offered instead a mostly tangy, lemon tart, quince-like character which while quite interesting just did not boost my Robusto at all. It was the third wine we tasted.

The first wine was the Canadian Vidal Ice wine: smooth, sweet and complex with dried apricot and fresh pear flavors, also offering some caramel candy notes in the finish. Very nice with a Macanudo Hyde Park. For the sake of the project I wanted to use a brand familiar to all, so I was delighted and pleasantly surprised to find that this wine had enough viscosity and depth of flavor to stand up proudly against a traditional mild to medium cigar. The hint of caramel in the finish lifted the Mac’s classic walnut/oak flavor profile.

The faux Ice Wine from Washington State was next up and while displaying concentrated candied pear and pineapple notes-flavors beyond typical Riesling-and sweet enough, with bracing acidity to balance, it was not quite as complex and came off not quite as sweet as the true Ice Wine. Even so, this wine too was a welcomed accompaniment to the Mac. The cigar was an old one from my collection and a bit cranky, slightly plugged perhaps, showing a hint of bitterness. The Riesling’s intense sweetness helped ease the smoke onto the palate, deftly masking that bitterness, like white sugar in black espresso.

Next, without any great hopes, and just for the heck of it, I tried the Italian Moscato. In comparison to its more ambitious predecessors, it showed a relatively simple character, yet it showed a mellow sweetness with just enough of that Muscaty-fruity flavor to act as a foil to the cigar’s walnut and charcoal notes. In other words, while by no means earth-shaking, this humble wine would still get you by in a pinch –like if you weren’t in the mood to drop $25.00 on a 187 ml bottle of Ice Wine or perhaps weren’t even able to find any. Plus, if you had a mind to, you could drink the entire bottle of Moscato yourself and walk away unscathed, fat and happy. It contains the same amount of alcohol as two bottles of beer, and sure beats Snapple.

But then I upped the ante. I lit up a favorite: a Famous Vitolas Especiales Robusto (now, sadly no longer available). While not a real heavy hitter, this cigar is still a nice, hearty, complex smoke. I cycled through the wines and they held their own against it. If anything, while the VE was more flavorful, it did not overwhelm the wines, making the combinations even more satisfying and interesting.

For those who haven’t smoked the aforementioned Vitolas Especiales, a few days later I decided to cycle through the three best of these wines once again, against a flavorful nationally distributed cigar. The Cusano Paired Maduro Robusto features 18 year old tobacco in the filler blend and is a honey of a rich, mellow smoke. It was plenty tasty against the Washington faux’s pure fruit flavors, but even better with the Canadian Vidal’s more complex fruit and caramel style. And the Cusano’s creamy coffee/chocolate character was like a dream when paired with the apricot and butterscotch of the TBA. You have to try it.

Finally the piece de resistance: I opened the TBA, a true WOW wine worthy of all its Gold Medals. It offered many of the same characteristics inherent in the delicious Canadian Vidal Ice Wine, but with even more body and depth, plus a take-me-now dollop of butterscotch in the finish. Just wonderful with the VE Robusto. The way the spice of the Ecuadorian Sumatra wrapper and hearty filler played against that elegant liquid candy, I would gladly do that combo -or the cigar/Vidal Ice Wine combo– any day of the week, even more than once per day, if possible, please.

Thinking of those who may not have access to the aforementioned Vitolas Especiales, a few days later I decided to cycle through the three best of these wines once again against a flavorful nationally distributed cigar, the Cusano Paired Maduro Robusto. This blend features 18 year old tobacco in the filler and is a honey of a rich, mellow smoke. I found it plenty tasty against the Washington faux’s pure fruit flavors, but even better with the Canadian Vidal’s more complex fruit and caramel style. And the Cusano’s creamy coffee/chocolate character was like a dream when paired with the apricot and butterscotch of the TBA. I urge you to try that combination.

In short, just when I thought it was safe to come out of the Port and Madeira cellar, Ice Wine and TBA show up, shaking their beguiling flavor profiles at me.

Reading Time: 6 minutes You may not be pulling the cover off the pool just yet, but Spring has kicked into gear – and there’s no shortage of new players on the field. So let’s get down to it: Click here to see our list of seven fresh top new cigars!