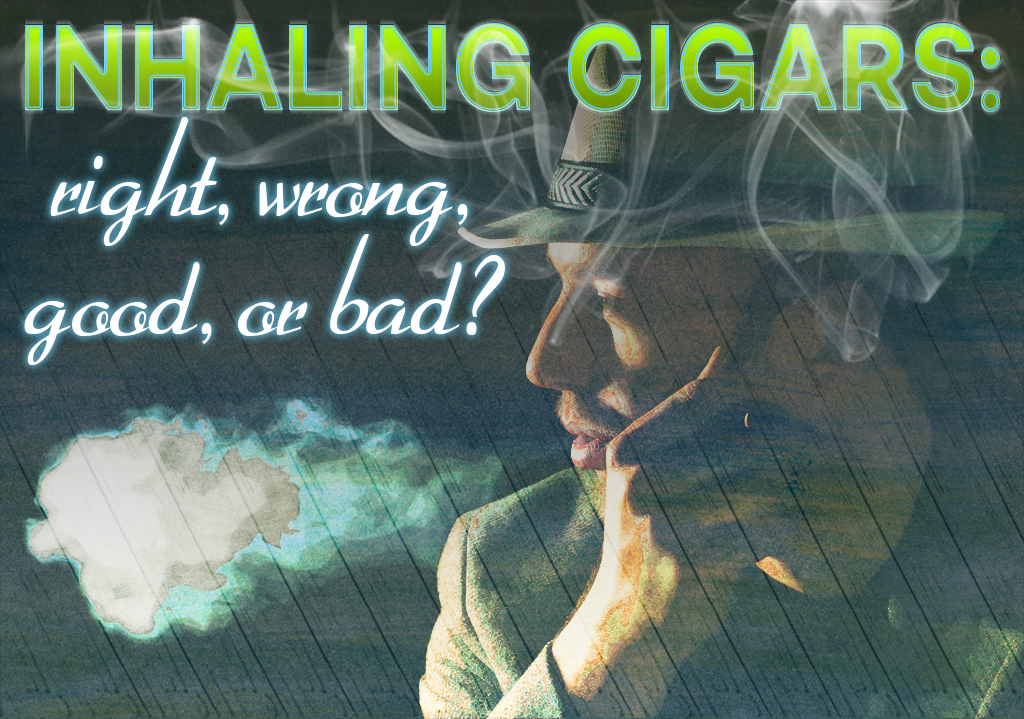 Inhaling cigars do you or don’t you?

People inhale cigarettes, so why not cigars? When it comes to inhaling cigars, there’s no specific rule, and the fact is, a number of cigar smokers do inhale as well as retrohale. In the latter case, you puff on your cigar and blow the smoke out your nose. In some cases, retrohaling results in a very peppery, nose-bending, eye-opening experience. On the other hand, it can help you discover flavors that you may not taste by simply puffing and expelling the smoke. As for inhaling cigar smoke, that’s another story.

The reason cigarettes are easy to inhale is that the chemical additives in cigarettes lower the temperature of the smoke, allowing you to inhale without too much discomfort. Premium handmade cigars are an all natural tobacco product and generally a lot bigger than your average ciggy. Consequently, even in mild cigars, the smoke tends to be hotter, thicker, and if inhaled quickly, can possibly damage your lungs. For the new cigar smoker, inhaling can provoke a coughing fit of Richter scale proportions.

Moreover, cigarette smokers who have either switched to cigars or smoke both have a natural tendency to inhale. A fellow I met many years ago would, in the course of a day, smoke a pack of Marlboro Red and inhale several full-bodied cigars. It just didn’t bother him. He must’ve had lungs of steel, an incredibly high tolerance to nicotine, or had no fear of ever getting lung cancer. One of the other interesting facts about tobacco is that cigarette smoke tends to absorb better in the lungs than the mouth because it is more acidic, whereas cigar and pipe smoke absorbs better through the membranes in the mouth because it is more alkaline.

Traditionally speaking, inhaling is not recommended or necessary for enjoying premium cigars. If you think inhaling a cigar will provide the nicotine you crave, tobacco facts show that cigars, particularly full-bodied cigars which have more ligero tobacco, will supply plenty of it without inhaling. Other facts about tobacco show that the nicotine content of well-fermented and aged cigar tobacco is much lower on average than cigarettes. The longer the tobaccos age, the more nicotine is dissipated, which is another reason cigar smoke is better absorbed by the palate.

Though the hard-core inhalers reading this post may disagree, if you want to fully enjoy a good cigar, gently pull the smoke into your mouth, let your palate pick-up the nuances of flavor, and leisurely blow the smoke out of your mouth and/or nose (see retrohaling above). If you need an extra shot of nicotine try retrohaling more often.

Let’s not forget that one of the precepts of smoking cigars is to relax and de-stress as you savor the flavors and aromas of your cigar. So, try to resist inhaling. Better yet, don’t inhale at all. You may find that you have a better appreciation for your cigars, and will enjoy them more as well.

Exactly what I have been teaching the new Comer, you should post this article twice a month.

I love my cigars but I don’t inhale and I smoke outdoors weather permitting.

I’ve tried both but I prefer to inhale personally…

what happens if i want to inhale a cigar?

Friends recommend trying an excellent tool with which you can quickly quit.
This tool helped me a lot, I recommend to read more:
http://bit.ly/sm000kes

I enjoy a premium cigar on special occasions. I used to enjoy one every day. I never inhaled and always appreciated the different ones for their individual flavors. You don’t have to inhale to enjoy a cigar.

Hey bill you licking much ass these days

Lol I’m watching the office while reading this artical

For the past few years I have had difficulty working out in yard, then in 2015 it got harder and harder to breathe. After many tests, it was a CT scan that showed COPD, emphysema and scarring in my lungs. I quit smoking 8 years ago but the damage has been done. I got to a point I couldn’t catch my breath and was coughing so hard I thought the top of my head would blow off, nothing was really working to help my condition. Finally i started on COPD herbal formula i purchased from NewLife Herbal Clinic, i read alot of positive reviews from other patients who used the COPD herbal treatment. I used the herbal remedy for 7 weeks, its effects on COPD is amazing, all my symptoms gradually faded away, i breath very more freely now! (Visit www. newlifeherbalclinic. com ) I recommend this COPD herbal formula for all COPD/Emphysema sufferers

I smoked a cigar for the first time. Now my chest is hurting really bad. Should this concern me? Should I see a doctor?

It’s been two years, are you still alive o try the second?

Great article Gary.You kept it real.You answered a few of the questions I had.From those who find reward with a nice cigar.Thx

I really enjoyed smoking cigarettes but could never get into cigars. I’ve had the cheap ones people use to roll blunts, and the expensive premium ones people smoke to celebrate marriage, etc. None of them ever really did it for me.

You have an asterick that there is no reference for, Gary Korb.
I’ve almost have 30 years of cigars only as well. I smoke without inhaling, but blow it out my nose. You’re missing out if you don’t. Never used the term referenced here.

I don’t know why people say you shouldn’t inhale. It doesn’t take long to get used to inhaling cigar smoke. I have inhaled cigars since I was 14 years old – it’s the most amazing feeling ever. Don’t forget, it’s only the smoke hitting the back of your throat which gives you a cough reflex – you can hold the smoke in your lungs all day without any desire to cough. I’d bet it will take most people less than 10 puffs to learn to inhale a full-bodied cigar – take a deep draw, then inhale quickly – resisting the urge to cough and then inhale lots of fresh air after. From there, you’ll get the most amazing feeling and you won’t have any urge to cough at all – you can literally hold the smoke in your lungs for as long as you want. Then exhale slowly – again, you’ll have no urge to cough at all.

Until you get lung cancr…

Anthea, what about when that cock hits the back of your throat, do you want to cough then or do you just let it slide on down??

I think I might buy a tobacco supply for cigars if they can release a very peppery eye-opening experience for me. Thanks for adding that cigarettes are easy to handle so I might decide to try something new. Since cigar and pipe smoke absorbs better, I might enjoy the experience so I’m curious to try it out.

Hey Angela,
I have something you can smoke. Lol. And its a real eye opener, unless you go down wrong and it pokes you in the eye, then its not so much of an eye opener. More of an eye closer. Any how, just be carefully going down and make sure you go all the way down so you can get that full flaver when it goes off, and like Miss Olson said its good to the last dropp.. So hope you enjoy. My pleasher…..

I only inhale the smoke so I can quickly blow it out my bum hole.

I am not sure of the cause of COPD emphysema in my case. I smoked pack a day for 12 or 13 years, but quit 40 years ago. I have been an outdoor person all my adult life. Coughing started last summer producing thick mucus, greenish tint to clear. I tried prednisone and antibiotics, but no change. X-rays are negative, heart lungs and blood and serum chemistries all are normal. I have lung calcification from childhood bout with histoplasmosis. I am 75 years old and retired.My current doctor directed me to totalcureherbsfoundation .c om which I purchase the COPD herbal remedies from them ,they are located in Johannesburg, the herbal treatment has effectively reduce all my symptoms totally, am waiting to complete the 15 weeks usage because they guaranteed me total cure.

I been inhaling for years I smoke swisher sweets and backwoods and black n mild here and there I’ll give premium cigars a try but I recommend the. 3 I said for a starter cigar

Reply
20 of the Best Hobbies for Guys – Modded

[…] You don’t even have to inhale if you’re concerned about your lung capacity. You can puff on a stogie to enjoy the […]

I inhaled out of habit omg never again

What utter BS… I’ve been smoking cigars for 45 years, and have always inhaled them!
I think the whole, “Please don’t inhale” crud is to get more folks to jump on the cigar
wagon, cuz if they did inhale, they would turn green & die!
Especially since all the uber-expensive, highly rated cigars, are SO harsh, they would
take the paint off of a barn, if they are puffed, or inhaled!
It’s not a dick-slapping society, where bucks compete to see how Potent a gar they can
stand to puff on, much like beer has become how much bitter-hops can I stand, before
my anus implodes me!

It’s supposed to be enjoyment! The salesmen know if you inhale, and enjoy it, 90% of you
will run away!!

I had to quit smoking cigars because I got to inhaling them way too deeply. Burned my lungs.

Sorry to read that. But thanks for sharing.
G-~

Imagine being afraid of lung cancer, but writing an article about cigars lol

Reply
Why is it worse to smoke unfiltered cigarettes? – AnswerParadise.net

Read More
Food & Drink
Looking to learn how to make an Old Fashioned cocktail? Here’s the recipe – and we’ve included a special cigar pairing that will really make this legendary drink go down as smooth as ever. It’s cocktail royalty, and you can learn how it’s done with these simple instructions.
Read More