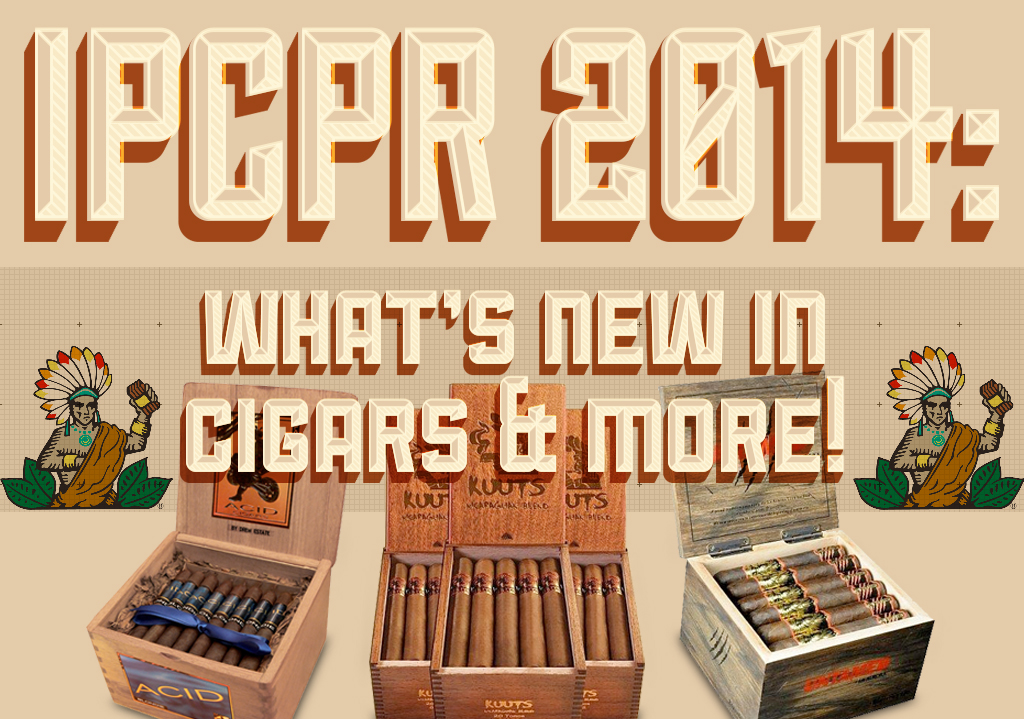 During the past few weeks, you have probably read press releases or early reviews on some of the new cigars that debuted at this year’s International Premium Cigar & Pipe Retailers Trade Show in Las Vegas (IPCPR 2014). Following is a recap (in no particular order) of some of the cigars and accessories that you may be buying in the months to come.

An exciting new collaboration between the Hollywood writer, director, and producer, Rob Weiss and Camacho Cigars. After joining Camacho’s “Board of the Bold” in 2013, an opportunity arose for Weiss to partner with Camacho on a label of his very own, the newly formed BG Meyer Co. BG Meyer embodies the aspirations of those on the journey to live a legendary life. The Standard Issue is a Nicaraguan blend hand-built by AgroIndustrias Laepe S.A., in Danlí, Honduras. The cigar is a medium to full intensity smoke featuring five different tobaccos that have aged for up to 8 years. Available in five popular formats, the Standard Issue is packed in boxes of twenty cigars and will retail from $8 to $10 per cigar. 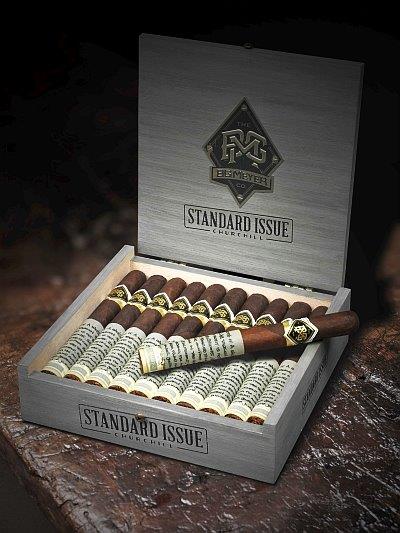 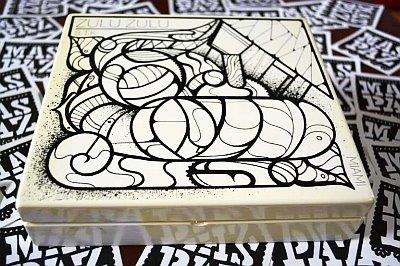 “For fans of Zulu Zulu, this cigar contains the identical Ecuadorian Connecticut and Nicaraguan Habano blends,” said Rico, “but this edition will be made in our own factory in Miami.”

G.R. Tabacaleras Co. collaborated with a new artist, Frederico Frum (a.k.a. “Mas Paz”), the Colombian-born street artist and Arlington, VA resident, to design the new boxes for this project. A strong advocate for youth in many communities in the United States, a percentage of Mas Paz sales will go towards a non-profit organization that will fund renovations for La Casa de la Madre y el Niño, an orphanage in Bogotá, Colombia. 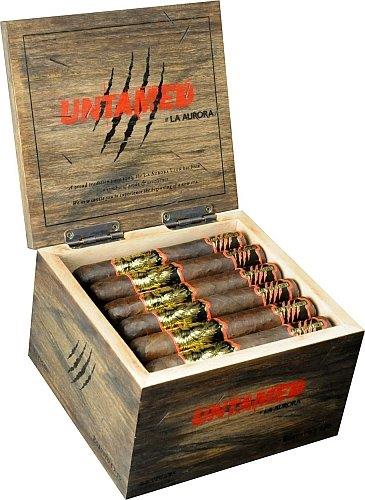 Using tobacco selected specifically for the Untamed project, La Aurora aims to please even the most demanding consumer with this unique blend. Led by master blender, Manuel Inoa, the team at La Aurora has been able to attack this ambitious project head on.

Since 2000, La Aurora has been searching for the ideal tobacco to enhance the strength of the blend without sacrificing La Aurora’s signature flavor. Utilizing tobacco from three different countries and a dark, oily Connecticut Broad leaf wrapper, the blend comes with the complexity of a medium-bodied cigar and the intensity of something more full. 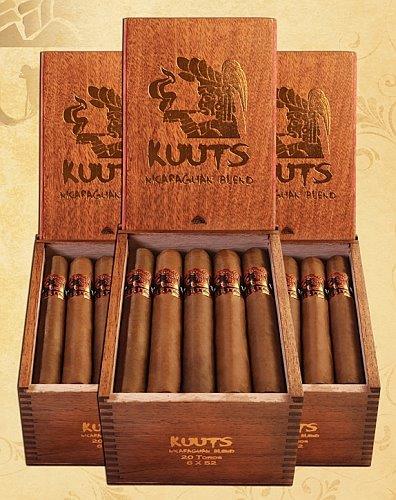 Kuuts, LLC released its 4th brand into the US market, The Kuuts Nicaraguan Blend. This is a solid medium bodied cigar that features Nicaraguan filler and binder with an Ecuadorian wrapper. This new release is available in 5 shapes for the US Market and presented in 20 count Cabinet Style Boxes. Shipping to retail and online cigar stores is set for August 2014.

For the first time in the company’s history, the president of Toraño Family Cigar Company, Charlie Toraño, felt it was time to create a cigar under his own name which represents his personal tastes and pastimes and has named it the Charlie Toraño “Captiva.”

“Captiva, which is a very small island off the coast of Southwest Florida, is my favorite place in the entire world,” said Charlie Toraño. “Every year I plan a summer family trip there which serves as my get-away from the everyday. It takes me back to the true essence of cigars. I am able to smoke and simply relax as I feel the pressures of life dissipate with every puff. I am able to reflect, count my blessings, and recharge my batteries. The Captiva cigar is a very elegant and flavorful cigar which represents the slow rhythms of the Island.” The Captiva blend consists of a beautiful oily Ecuadorian wrapper and Nicaraguan fillers that were specially aged and selected by Charlie. The cigar is medium to full bodied, with notes of coffee, chocolate, and sweet peppery spice. Captiva will retail between $7.95 and $8.95 and will come in 4 sizes:

A maduro version of Drew Estate’s popular Blondie featuring a San Andrés Valley Maduro wrapper. The new ACID Blondie Maduro will appeal to those who desire Blondie in a bolder blend.

The Kentucky Fire Cured line is being expanded by three sizes: 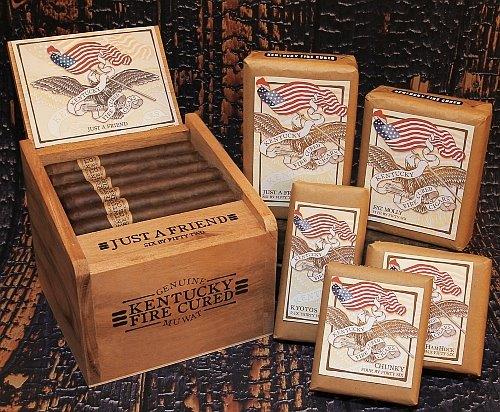 All three sizes are based on the original KFC cigars blend, which features smoked tobaccos as well as dark air cured tobaccos.

A 4½” x 50 Short Robusto based on the stronger Bait Fish blend. A bigger Bait Fish, for fans of that blend. Drew Estate’s customers asked for it, and they delivered. The MUWAT line will also debut a new packaging style at the IPCPR tradeshow.

The Norteño by Willy Herrera

The “Norteño” showcases extensively aged tobaccos from the Estelí and Jalapa growing regions of Nicaragua, coupled with a spicy Honduran binder and a rich, bold Mexican San Andrés maduro wrapper. The “Norteño
by Willy Herrera” will be available in the following six vitolas at select Herrera Estelí retailers nationwide. 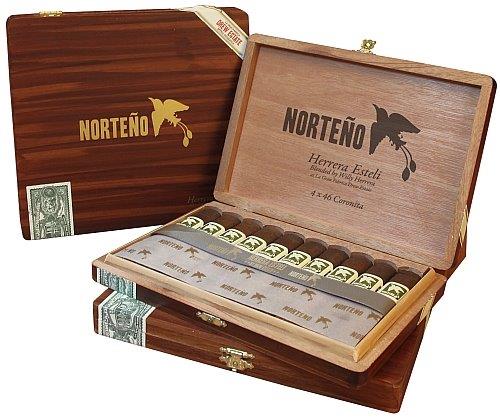 Arango Cigar Co. has released three novel cigar cutters from Credo (based in Marseille, France).  They include two variations on Credo’s popular “Synchro” cutter, plus the double-blade “XXL,” with a 70-ring gauge

The new RG 60 has stainless steel operating hardware and an ABS plastic body. Its 60-ring gauge size is greater than the actual all-steel Synchro 54 ring cutter. SRP for the RG 60 is $5.00.

Since so many 60-ring gauge and larger cigars are now being produced, Credo now has their XXL cutter. Though slightly larger than the original Synchro, this design is light in weight due to its ABS plastic body and durable stainless steel mechanism. SRP for the XXL is $6.00.

Credo’s 3 in 1 punch cutter is now offered in two versions: a rectangular aluminum model in black, silver and titanium finishes, plus a rounded-contour stainless steel version in black, silver and bronze with a key ring. The cutter’s tri-fold design has two hinged side wings that open out to reveal three punches, in 34, 48 and 60 mm ring gauges. SRP for the 3 in 1 cutter is $53.00.

All Credo cutters come with a 100% lifetime warranty and customer satisfaction guarantee.

That’s all for this year. To keep informed on all of the new products to come out of IPCPR 2014, follow CigarAdvisor on Facebook for press release announcements.

How to help get rid of cigar odor