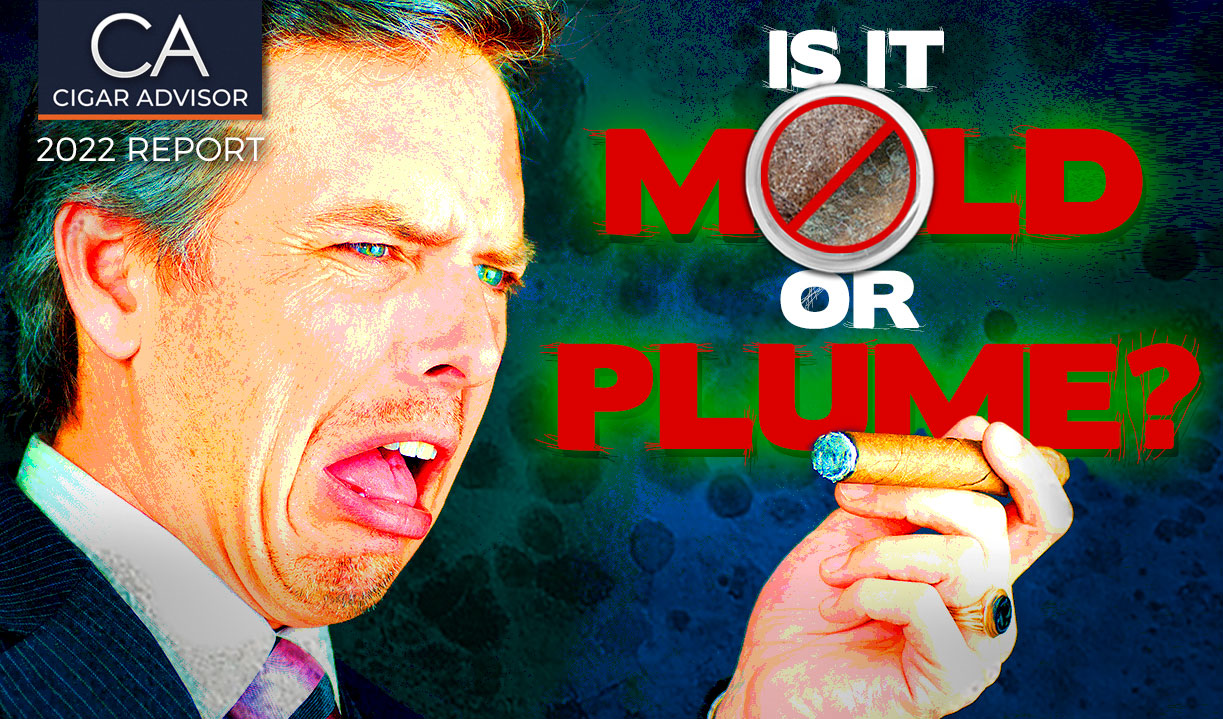 Nothing can deflate a cigar smoker’s mood faster than seeing that some of his precious cigars have sprouted a fuzzy white growth. It could be plume, or it could be mold. The difference is, if it’s plume, there’s nothing to worry about. If it’s mold, there’s trouble ahead. And whether you’re among the newly initiated or a veteran passionado, it’s important to know how to tell them apart. For many it’s not easy; at least not at a glance.

What is Plume, and What Causes it to Form on a Cigar?

Plume, also called “bloom,” is a harmless, white powdery substance that develops naturally on a cigar’s wrapper over time. It can take months or years to form, which is why it’s rarely found on new cigars; the reason being, any vestiges of plume are wiped away as the cigars are handled. Plume also tends to prefer cigars with oily tobaccos. As cigars continue to age, the oils will seep through to the wrapper’s surface. This includes the oils in the wrapper, too. Next, they begin to crystalize into a white, ash-like powder. To the naked eye these crystals may appear fuzzy like mold but are far from it. The good news is plume indicates that your cigars are aging well. Additionally, plume will not affect the taste of your cigar. However, if your cigar was rolled in a dark maduro wrapper like Mexican San Andrés Negro or Connecticut Broadleaf, it may even taste a little sweeter.

How to Remove Plume from Your Cigar:

Plume is easy to remove. Simply brush it off gently with your fingertip. Next, check to see if it left any stains. If it’s bloom, the wrapper will remain clean. Moreover, plume does not grow on the foot of a cigar, but mold does. Therefore, if the wrapper has stains and/or the foot appears to have some fuzzy growth, odds are you’ve got mold.

What Causes Mold to Form on a Cigar?

Mold is a fungus that spreads by producing spores in patches called colonies. Up close, these spores look like skinny little stalks with round structures on top of them. Mold also thrives in moist, warm environs. The most common cause of cigar mold is when the humidor humidity gets too high; for example, 75% RH and higher. Combined with higher temperatures, 72-degrees and higher, the problem can spread to even more cigars if not caught in time. Mold also forms in colors that include white, green, blue, yellow, and grey. In addition to staining the wrapper (and your fingers), mold also emits a distinct musty odor.

How to Keep Your Cigars from Getting Moldy:

When you check your cigars, as you should regularly, make sure to check them for signs of mold, especially if you prefer your humidity on the high side. Keeping your humidity and temperature levels within 65%–70% and 67–72 degrees respectively, is the most effective way to prevent mold spores from occurring. This is especially important during the winter months when your home is warmer and the air is drier. Overcompensating for the lower humidity in your home can lead to disaster. Likewise, during the hotter summer months, try to keep your cigars cooler even if you have to move them to another location.

Tubo cigars can also be sources for fungi growth. Removing the cigar from its tube, or at the very least, opening the tube before putting it in the humidor will help prevent spores from forming.

What to Do if You Find Mold on Your Cigars:

If you find any cigars with mold, the first thing you should do is separate them immediately from your other cigars before it spreads any further. Depending on how much mold is affecting the cigars the question arises, “Should you ditch a cigar that has mold on it?” Using the better safe than sorry rule, yes.

If only a little mold is on the cigar, some cigar smokers will brush it off and smoke the cigar. But since there’s no guarantee that you’ll remove all of the spores, it’s still safer to toss it. Besides, unlike plume, mold will affect the taste of your cigar. And since mold comes in so many varieties, including some that can cause illness if they get into the mouth or lungs, it’s just not worth the risk. However, there is one thing we know for sure: if the mold on your cigar is green or blue, toss it immediately.

Are Some Cigars with Mold Salvageable?

According to some sources, yes, if the mold is white and not too widespread, but it’s a process. If you have determined that some cigars are salvageable use a cotton swab wetted with denaturized alcohol—vodka will do the trick—to completely remove the fungi. Next, place the cleaned cigars in an airtight container and put them in the freezer for several days. Then, move them into the fridge for a day to slowly defrost them. After that, you can remove them and bring them back to room temperature.

How to Remove Mold from a Cigar Humidor:

Worst case scenarios include mold moving from the cigars to the humidor. If this is the case—you may also smell some musty mold funk—then your best bet is to clean it out. After removing the cigars, wipe down all of the humidor’s surfaces with a mixture of water and isopropyl alcohol. Give it a day to dry. Next, check that you’ve gotten all of the mold spores. If not, trying using some very fine grit sandpaper to get into the tighter crevices and repeat the alcohol rubdown. Once it’s dry, season your humidor again and replace the cigars.

Looking for an in-depth tutorial on how to rid your humidor of mold? Mold removal expert, R.S. Hall tells all: Click the image below to get started. 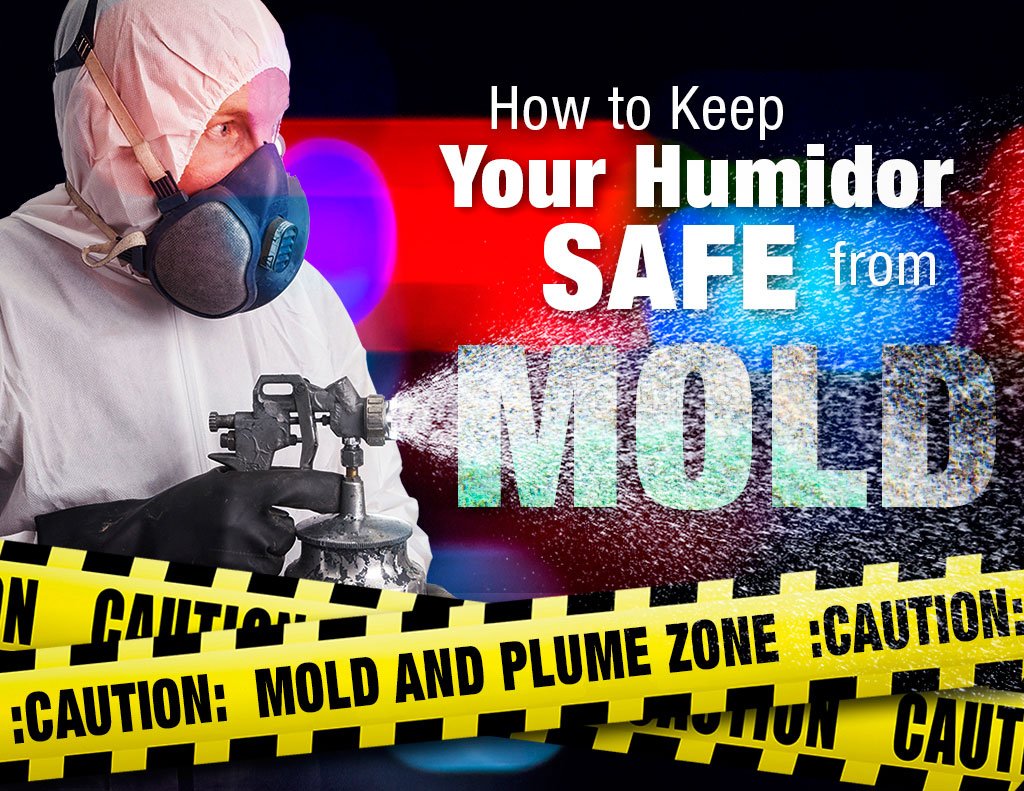 I hope you never have to go through the heartbreak of moldy cigars. But if you ever do run into the problem you’ll know how it got there, and what to do about it. As always, your insight and comments on the subject are welcome.

How to keep your cigars from getting moldy: smoke them.

Have found plume on 4 brands of cigars, brushed off almost with a breath. Found mold only once. Was a popular brand, a month after i bought it. Convinced me to separate brands, keep cellophanes on. Only found it once, for what we spend on good smokes, it makes sense!

Read More
Cigar Ratings & Reviews
My Weekend Cigar was the Olor Nicaragua by Perdomo Toro - and I bet this is YOUR new morning cigar. Find out why: click NOW for the details in my review!
Read More