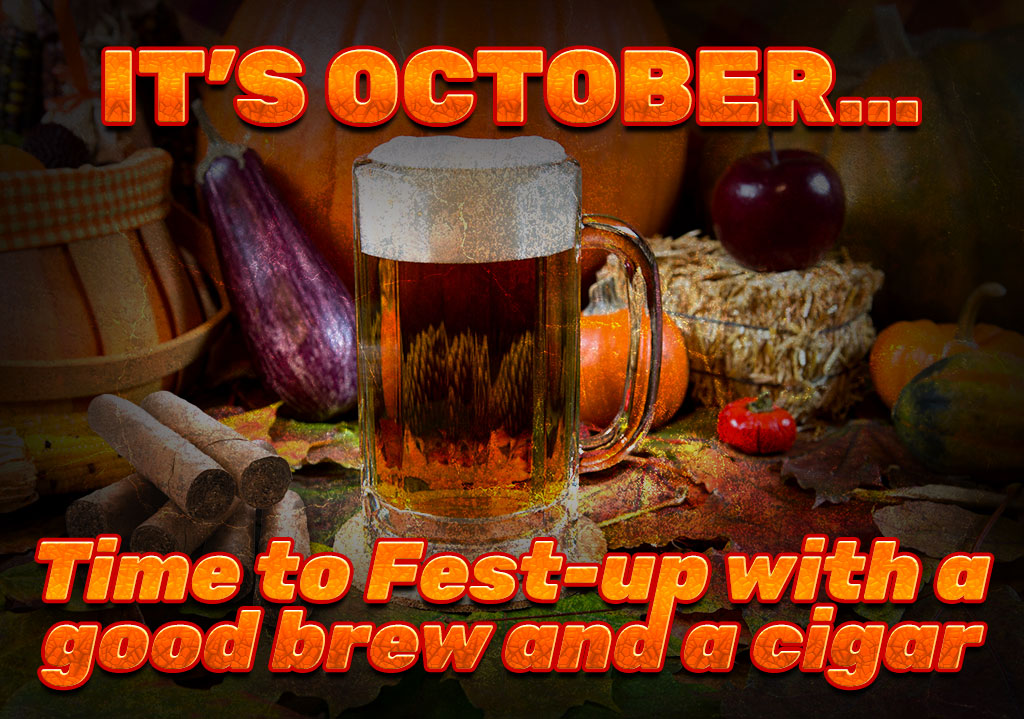 A Beer and a Cigar: Pairing Ideas

This is not the case incidentally where wine is concerned, for if the coupling doesn’t work out, what are you going to do, light another cigar? Open a different bottle? It takes a lot more planning and circumspection to get it right the first time. But more on how to accomplish that later.

The key to all taste pairings, whether food and beverage, beer and a cigar, or any combination which involves the palate, its weight, by which I mean body or substance: mild (light), medium, or heavy (full). Add to that the range of tart to sweet, and bitterness — or the lack thereof — and right there you have all the key elements of taste, bearing in mind that 85% of taste is actually olfactory (smell). In other words, the aromatic components of taste are not just the icing on the cake: this cake (taste) is mostly icing. But the skeleton, the base, the all important foundation is: sweet/sour, bitter/not bitter, and weight, that is light, medium, or full-bodied.

With that in mind we approach our little project. I find that for me it’s seldom, “I’m going to have a Guinness, so what should I smoke?” It’s usually, “I think I’ll try that new Inferno by Oliva that’s been getting such raves. What will go well with that puppy, I wonder?”  Well, it’s supposed to be a pretty full powerhouse, so maybe it would work well with an Irish Stout, but let’s try a Sierra Nevada Torpedo India Pale Ale (from Chico, CA) hefting in at about a 7% alcohol content. A lot of body, a crisp finish, with some pretty sturdy bitterness to it, and an outspokenly hoppy aroma that won’t quit. “Yes, that should do nicely,” would be my computation.

On the other hand, if I was more in the mood for mating a beer and a cigar that’s a medium-bodied, crisp, clean cedary smoke, like a Rocky Patel Honduran Classic natural, then a crisp, medium-bodied Double Take Pale Ale (Rochester, NY) at about 5 to 51/2% ABV would handsomely do the trick.

Recently I made the mistake of opening a Shock Top Raspberry Belgian Style Wheat Ale (St. Louis, MO) next to a Rocky Patel Old World Reserve Maduro, a great smoke, but mellow as it is, it was booming out way too many bass notes, masking practically all the character of the fine crisp ale.

With its bright overtones of berries the Shock Top was almost entirely obliterated by the rich maduro flavors. It really wanted something like an ACID Cold Infusion Lonsdale, for a longer smoke, or a Verona Creme Caramel cigarillo, for a quickie. Both of these offer intriguing aromatics with a mild-to-medium base plus, a nice hint of sweetness on their wrappers to meld with the fruit.

I was already well into the OWR, so, I downed the last of the raspberry brew, just grabbed one of the aforementioned Torpedoes,  and full speed ahead. For the sake of referencing a brand which I’m sure is in national distribution, I will add here that a Newcastle Brown Ale (Britain, U.K.) would have done nicely too, its soft, mellow chocolately caramel finish caressing gently the complex chocolately Maduro flavors. But that hellacious IPA beckoned.

The nice thing is, you could enjoy a Newcastle Brown Ale before or after the IPA and they’d both stand up great next to the Rocky. Even though these are very different from each other in character, they both have enough substance to make the cut.

Use your judgment. Balance the weight, sweetness and bitterness, or the lack of any of those elements – making sure there’s a comparable oomph or ahhh between the beer and a cigar, and you’re up for a pleasant taste experience.

“And what about pairing cigars with wine?” you ask. With the Holidays soon enough upon to us, that’s a very appropriate question. Well, I just might have to do some research to address that subject. Hmmm…

Reading Time: 9 minutes This relationship actually runs pretty deep…so I’m sharing 5 Things I learned that bond whiskey and cigars together: how cigarmaking dovetails with distilling, why a smoke is a natural fit with a pour of whiskey by its side, and what else these indulgences have in common.