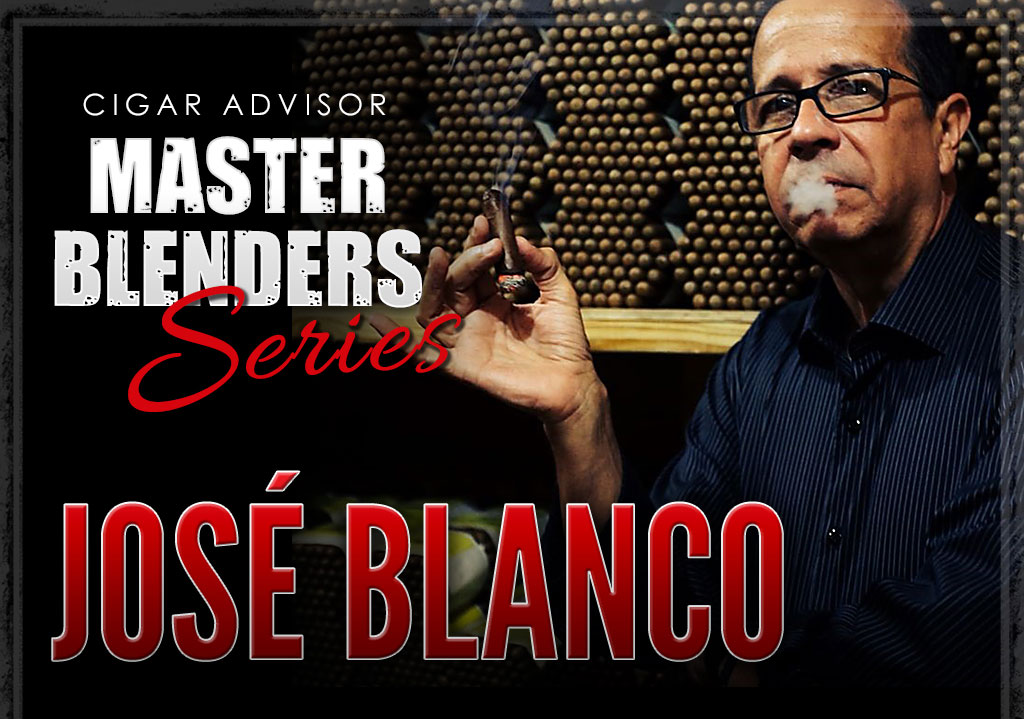 A Look Inside the Jose Blanco Cigar Blending Seminar

If you’re an avid cigar smoker and you’ve never heard of José Blanco, that’s OK, because chances are you’ve smoked at least one of his cigars. Whether it’s one of the La Aurora 1495 cigars he created during his 30-year tenure at Tabacalera La Aurora in the Dominican Republic, or the Cuenca y Blanco cigars made with Dr. Martinez Cuenca at Joya de Nicaragua, or his most recent effort, Señorial cigars, José Blanco is an artisan of the highest order, and one of the most beloved personalities in the cigar business. If you’ve never met José in person, you may want to attend one of his blending seminars at a cigar store event or lounge near you.

José Blanco started his educational seminar in 2004. Simply named, “Blending Seminar,” during the last 12 years José has given more than 600 lectures in over 10 countries helping cigar smokers understand exactly what makes a great cigar tick, or in this case, smoke. I recently attended his blending seminar at the Leaf Cigar Bar & Lounge in Easton, PA where I learned two things: 1) I knew more about premium handmade cigars than I thought, and 2) I didn’t know as much about premium handmade cigars as I thought. If that sounds confusing, stay with me and it will all come clear. But first, here’s the least you need to know about Señor Blanco, or as he sometimes jokingly refers to himself, “Mr. White:”

The son of a second generation tobacco farmer from Tamboril, Santiago, Dominican Republic, Jose Blanco began learning the family tobacco trade when he was 16-years-old; about the same time that he smoked his first cigar. Many years earlier, José’s uncle, Arnaldo Blanco, founded Tabacalera Palma in 1936, and today, his cousin Jochi (“HO-chee”) Blanco runs the factory.

José began his career at La Empreza Leon Jimenes, which, at that time owned the La Aurora cigar brand and Presidente Beer. He started in Sales, selling Marlboro cigarettes for the Central and South American markets, and later moved on to Presidente beer, but José was also on the tasting panel for La Aurora cigars. In 1999, José began working for the cigar division exclusively, was promoted to Sales Director, and was equally involved in the blending process. Wanting to start his own cigar brand, José retired from La Aurora in 2011, but he put it on hold after signing a two-year contract with Joya de Nicaragua cigars to serve as their Senior Vice President. One reason for the hiatus was José’s deep interest in learning more about Nicaraguan tobaccos. It was also during this period that he and Joya de Nicaragua president, Dr. Martinez Cuenca, created the critically-acclaimed Cuenca y Blanco cigars selection.

After completing his contract with JDN, José moved back to the Dominican Republic, and in February of 2014 he and his wife, Emma Viktorsson, founded Las Cumbres Tabaco. It is at this juncture that José created the blend for Señorial cigars, which are made at his cousin Jochi’s Tabacalera Palma in Santiago. José’s experience with Nicaraguan tobacco paid-off, too. The Señorial blend consists of Dominican Piloto Cubano and Dominican Corojo long-fillers, Nicaraguan binder from Estelí, and a Habano wrapper grown in Ecuador. Following its debut, Señorial by José Blanco was heralded by the cigar bloggers and magazines, including Cigar Aficionado, who awarded the Señorial Corona Gorda No.5 and the Paco “outstanding” ‘90’ scores on two separate occasions.

So how did José Blanco come up with such a winning combination? That’s where the Blending Seminar comes in.

The seminar doesn’t teach cigar smokers how to blend cigars; such a feat takes years to master. Rather, José teaches them what to look for in a premium cigar and how to tell the difference between different wrappers by their color, feel and flavor, and much more.

Using the Socratic method of teaching, José asks questions of his “students” as they smoke cigars that are rolled especially for the seminar with multiple wrappers (see photo below). The cigar may have wrappers ranging anywhere from Connecticut, to Ecuador, to Nicaragua, Mexico and other countries. The point is, good wrapper leaf comes from a variety of origins, and José helps smokers see, feel, and taste the differences in each.

“When you are making a blend there’s six basics things you are looking for,” says José. Then he points to someone at random and asks, “What is the first thing we want when making a blend?” Usually the person looks like a deer staring into a pair of headlights, or The Honeymooners’ Ralph Kramden during one of his “huminah-huminah” moments, but José reassures the group there are no bad answers. Each question is passed along around the entire room, so everyone gets an equal shot.

So, what are the six basic things we should be looking for when blending a cigar? The group members are first asked what they are, in order, and to consider each component as they smoke their sample cigar.

Like describing a great movie, I don’t want to give away too much of the plot at the risk of revealing some spoilers, but here are a few points of interest that I took away from the seminar:

Before lighting up a cigar, you should consider how much time you have to smoke it. Time also helps determine what size cigar you should smoke. José’s basis for time vs. smoke is as follows: “If it takes you 30 minutes or less to smoke a Robusto [5” x 50], you are smoking it too fast.” Rushing your cigar can result in missing what the blender intended for you to taste. The faster you smoke, the more the flavor profile will be lost. Moreover, the faster you smoke, the hotter the cigar will be, and will likely turn bitter on you.

This is the act of blowing cigar smoke out through the nose without inhaling. José demonstrates this and explains that retrohaling will help you pick up, or “feel” the myriad nuances of flavor more clearly. It’s also a good way to determine the actual strength and body of the smoke. If you don’t know how to do it, it pays to learn, because the nose can define hundreds of more flavors than the palate, plus, you’ll acquire a better appreciation for the overall blend, too. How often should you retrohale? José recommends that you retrohale the first time early in the smoke when the cigar has just begun to burn well; then once or twice as you reach each section of the cigar – the first third, middle third, and final third.

The role of the wrapper

As the seminar cigar burns through each wrapper leaf, José asks each guest if they can identify the wrapper. It’s a guessing game for most, but the point is that taste is subjective and no one is wrong when it comes to how they perceive flavors, aromas and strength.

Some of the other takeaways were useful to consumers who buy cigars in a retail store. These include how to properly inspect a cigar before you buy it. Things to look for are the construction of the cigar. Feel for any soft spots. Check the wrapper. Is it even in color, oily, or veiny? Look at the cap. Is it well made? Is it a triple cap, a pig tail, or tapered? José says that regardless of where the cigar was made, if the cap is well done, you can tell the cigar was rolled by an experienced torcedor. Check the foot, too. The ligero, or black tobacco should be in the center of the roll. This is another sign of expert craftsmanship. Suffice it to say that before you put your money on the counter, kick the tires.

Do you remember when I wrote that after taking the seminar I knew more about premium handmade cigars than I thought, and that I didn’t know as much about premium handmade cigars as I thought? During the cigar wrapper identification part of the seminar, I only guessed two of the wrappers correctly. However, had I gone with my first instinct and not changed my answer when called upon, I would have gotten them all right. I’m not saying this to boast; besides, my erroneous answers are “on the record.” Rather, the lesson here is to always trust your gut. The same applies to smoking cigars. By applying the criteria discussed in the blending seminar, the more cigars you smoke, the more you’ll learn. And if you have a hunch about something you smell or taste in a cigar, odds are you’re going to be right.

José Blanco has been working with tobacco almost his entire life, yet as he and other cigar makers I’ve met over the years have told me, “Every day I learn something new about tobacco.”