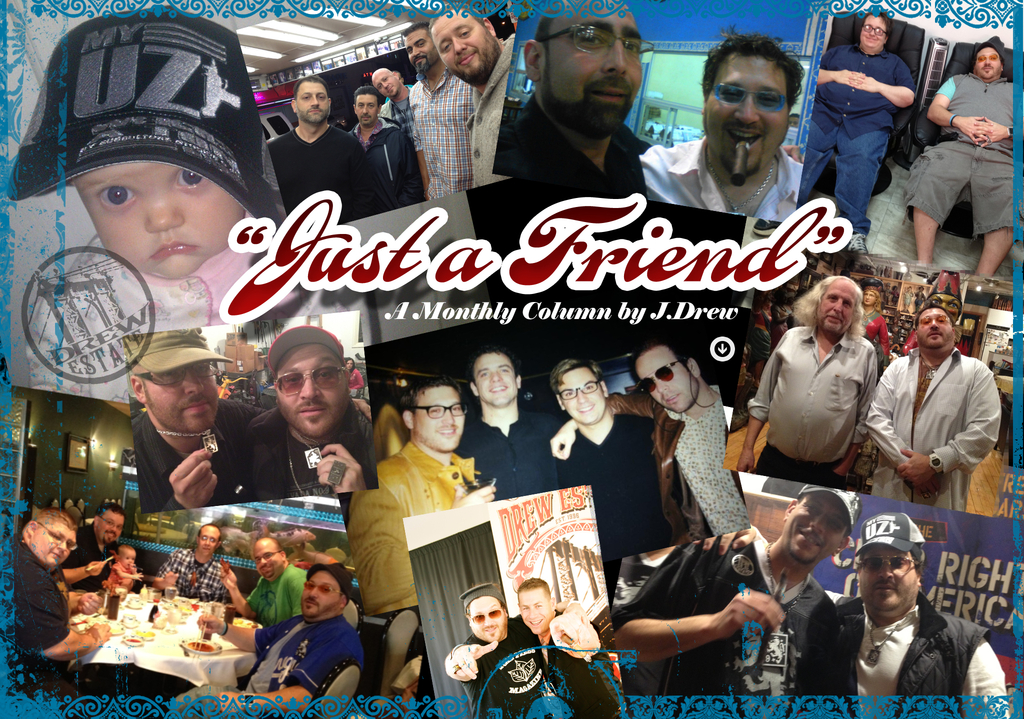 “Just a Friend” A Monthly Column by J. Drew

“Everything I’m not made me everything I am” – KANYE WEST.

If I can learn anything from anyone, I tend to like them. I know it’s a relatively low standard at first glance, but … It’s who I am.

Recently, I have been writing a lot about the past 14 years of running our factory in Estelí, Nicaragua. A lot of hard times and pain rolled up in that factory. So many conversations and memories trapped within the cooling room walls – just bustin' the seams of my brain box, fighting to come out.

But even with the struggle, these brutal days were the best ones of my life. So many people who have influenced my values, beliefs and wisdom in so many ways…

Some of these people were transient, just passin' thru those green hills of Northern Nicaragua. Others never left my side. Either way, I can sincerely say that all of them have helped shape who I am as a man. It’s these personal and powerful reflections that led me to write my fourth monthly column for Cigar Advisor – “JUST A FRIEND”.

As a fat, awkward, class clown growing up in New York, I guess I identified with a rap artist that some of you may have heard of – named Biz Markie. If the name doesn’t ring a bell, maybe the song “Just a Friend” does … (“Girl, you got what I need, but you say he’s just a friend”). Please feel free to hum it out loud while you continue reading. (“Oh baby, you!”)

Like me, Biz Markie was also from New York and came up in the mid to late 80’s. He was the cousin of Big Daddy Kane, who was a hard core rapper that later reached even greater status after having sex with Madonna and was even in her book.

His cousin Biz Markie, however, was not as well respected as Kane. While Kane was dropping iconic hard core songs of politics and struggle, Biz Markie was making songs like “Pickin Boogers”,”Vapors”, and “Just a Friend.”

My kind of dude.

Who’d a thought that Biz’s 1989 song would have the power to influence SNACKi, over here, to name our “go-to stick” from the new KENTUCKY FIRE CURED line of cigars after it…? Guess it really did have a lasting effect on me, but there is more to the story.

It was during a 2012 cigar event at The Leaf Cigar Bar in Easton, Pennsylvania when the song came on … and everyone, including “Fat Chops”, yours truly, was singing all the words together. Well actually, we weren’t just singing, we were outright screaming. “Oh baby…!” You see, this event was heavily attended by many people who I have met throughout my travels, and most I’ve known for years. We were just so thrilled to reunite together at The Leaf that night – and then it hit me…

The “Just a Friend” song unlocked a whole different meaning for me and everyone in the room that rainy night. We were friends, finally all together in one place sharing cigars, drinks, hamburgers – and the stories of our lives. That’s what cigar smoking is all about, that’s what life is all about – camaraderie, friendship, love for our brothers and sisters

The next slice-of-life chapter behind the “Just a Friend” size of our new brand, KENTUCKY FIRE CURED actually took place after the name was fully agreed upon by the Drew Estate team – but is still significant. It happened in our town of Estelí, Nicaragua, where all Drew Estate cigars are made.

One of our head guys at the factory, Chino, had received some very bad news while visiting the doctor with his pregnant wife. It was the 7th month of the pregnancy (and their wedding anniversary to boot) when the doc told him that they were going to lose the child – it was imminent. The blow was crushing and we were all destroyed.

Our guy, Chino, who has been with me since 1999 is like a little brother. When he invited me to come to the service at his church, which happens to be perched up in the mountain, I was definitely appreciative. Nervous and sad, angry and bitter, emotions from every angle wisped thru me due to this injustice.

As I approached the church I saw Chino standing in the entrance way with his wife, Candy. They were melancholy, eyes red, standing on the dirt floor of a half built church and leaning on a brick frame of a door. They were down for sure, but the dignity that radiated from them was sound.

As we walked inside the church the Pastor greeted us, and again, I was self conscious about the dirt floors. I guess it has been a while since I was in a place with a dirt floor, so the impact was heavy on me. Then the music started and six girls began to sing the most beautiful song I have ever heard. Within minutes I saw Chino and Candy swaying with the music, and the healing power was amongst us.

Candy's hands were raised as she sang along with every word. The emotion broke me down and tears filled my eyes. To my surprise they were both smiling, holding hands and healing right in front of me. A thing of beauty in the deep hills of Northern Nicaragua that makes one proud to have made such friends. This, I quietly thought to myself, is what life is all about: loyalty, camaraderie and friendship.

For some reason all of this made me reflect upon this “Just a Friend” name that we chose for a brand that’s based in Southern Hospitality. Heck, we weren’t in the South of the US, couldn’t be further … But the feelings were the same.

Just a Friend stands for everything Drew Estate is about. Maybe not the exact lyrics that Biz Markie dropped that summer of 1989, maybe not a girl or any person in particular. But something more important, and profound that the cigar community shares with each other as we puff and bullshit about our lives, our problems and our victories together. Cigars are all about friendship.

Jonathan Drew, Co-Founder of Drew Estate - Graduate of Brooklyn Law School; in 1996, Jonathan Drew immersed himself in operating a new cigar retail kiosk in the World Trade Center rather than practicing as an attorney. Originally creating La Vieja Habana, initially a house brand, he decided to take it nationwide working with the Perdomo factory. When it became clear that Drew Estate needed its own manufacturing facility, Drew left his Upper West Side apartment and " "went native" " by moving to Esteli in 1999, where he opened our first factory with six torcedors. Today, he is regarded as a pioneer and visionary within our industry, Drew spends much of his time in Nicaragua overseeing our factory, La Gran Fabrica Drew Estate. He is ultimately responsible for all aspects of our Nicaraguan operations.