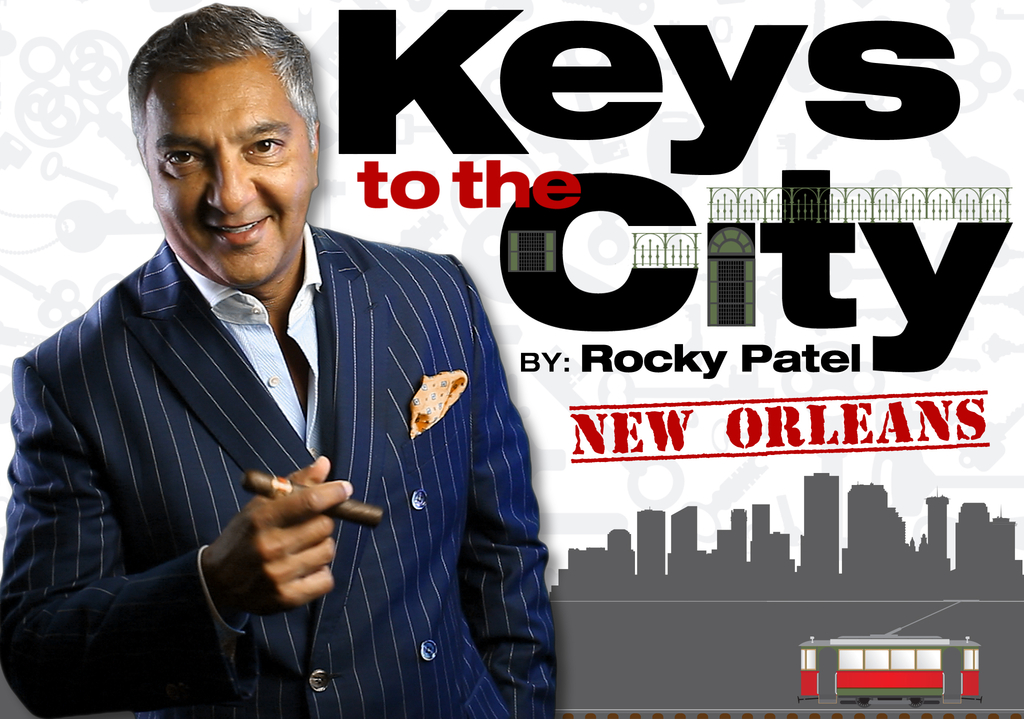 One of the best things about being a premium cigar manufacturer is that I get to do a lot of traveling. It’s gotten to the point where I think I spend more time in an airline seat than I do in my bed. This month I’ll share my impressions of New Orleans – a vibrant and colorful city with a great mix of culture, music, food, and history.

New Orleans has always been one of my favorite cities for its history and variety of cultures. All of this is evidenced by the city’s people, cordial hospitality, music, and food – making it one of the most unique communities in the United States.

One of the things that makes New Orleans such a fascinating city is that you can have as many as 20 different sensory experiences in one night. You can casually wander from club to club, starting with a great rock band at The Famous Door, to a traditional jazz ensemble at The Spotted Cat, to a quiet little place where you might find someone playing solo piano, or accompanied by a guitar player.

Even if you’ve never visited New Orleans, you’ve probably heard of Bourbon Street. Because of its popularity, Bourbon Street is where you’ll find most of the tourists hanging out. But Bourbon Street isn’t the only place where the action is. Even more exciting, in my opinion, is Magazine Street; that’s where the locals hangout. Located on the other side of Bourbon, Magazine is where you’ll find art galleries, little, out of the way dive bars, some of the best local food and drink, plus every type of music from rock, to country, to jazz and everything in-between.

If you’re a cigar smoker like me, New Orleans is one of the few American cities where many of the bars still permit smoking.

The Ritz Carleton is a very old and ornate hotel with a marvelous old world atmosphere. The lobbies are immense, while the rooms are spacious and beautifully appointed. One of the best restaurants in the Ritz is the M. Bistro. The food is spectacular, and among the M. Bistro’s must-try specialties are their famous Rabbit Confit, Frogs Legs, and my personal favorite, Cajun Eggs Benedict.

Located just south of Bourbon Street, the Monteleone is one of the most unique luxury hotels in the city. Having recently completed a $70 million renovation, the hotel is stellar, from the cavernous marble-laden halls to the plush décor of the suites.

One of my favorite places to relax with a cigar in the Monteleone is at the Carousel Bar. Instead of tables, seating takes place on a completely refurbished antique carousel, garishly decorated with Mardi Gras masques. But the piece de resistance is, while you’re enjoying a fine drink and a cigar, the bar revolves slowly giving you a continuous panoramic view of the room. The best way to describe it is, you feel like you’re celebrating Mardi Gras inside a luxury hotel. In addition to the Carousel Bar, the Monteleone also offers a rooftop bar that’s ideal for smoking and enjoying the hustle and bustle of the French Quarter from a bird’s-eye view.

Not everything that happens in NOLA happens on Bourbon Street. Located on the other side of Bourban, Magazine is where you’ll find art galleries, little, out-of-the-way bars, some of the best local food and drink, plus every type of music from rock, to country, to jazz and everything in between.

Galatiore’s is the ideal place for the truly ardent gourmet. Founded by Jean Galatoire in 1905, the recipes have been in the family for generations, dating back to the Galatiore’s village of Pardies, France. The restaurant also has the atmosphere of a French family restaurant, and the service is beyond reproach.

If you like Pate de Foie Gras, Galatiore’s has the best I’ve had anywhere – even in Paris. They offer several different types of Foie Gras and a modest selection of sauces to go with them. Other specialties that set Galatiore’s apart are the Cajun Oysters en Brochette with pickled relish, their famed Oysters Rockefeller, and Trout Meunière.

The restaurant has two dining areas. They take reservations for the upstairs dining room, but if you want to eat downstairs, it’s first come, first serve, no exceptions.

Another one of the best eateries in the city where you’ll find both authentic and esoteric Louisiana cuisine. Located in a 19th century French-Creole building in New Orleans’ central business district, the restaurant was created by world renown chef, John Besh, a native of New Orleans, and has three elaborately decorated dining rooms: the main dining room, lit by crystal chandeliers, a two-story wine room, and the Gravier room which offers a more intimate setting.

This is high-end formal dining at its best, making for a true gourmet experience for ultimate foodies.

If you’ve never had barbequed oysters, you’re in for a real treat at Drago’s. Founded by Drago and Klara Cvitanovich in 1969, Drago’s offers great seafood in a casual, family-style atmosphere at a reasonable price.

The restaurant’s motto is “Home of the Original Charbroiled Oysters.” The house specialty, they charbroil grill the oysters in their shells until blackened. Prepared using a garlic, butter and herb sauce with Parmesan and Romano cheese, the flavors are to die for. I just love watching the butter bubbling on top of the oysters when they’re served. Squeeze some lime on them and it’s one of the most decadent and savory things you’ve ever tasted.

The Faubourg Marigny district, Frenchman Street in particular, has a nightlife scene all its own. It is also one of the most picturesque sections of the city. Originally an 18th century plantation owned by a wealthy Creole, the property was subdivided in 1806, and today the district has a very European look and feel. Old banks and local stores now serve as homes, and warehouses along the riverfront are now used by artisits and musicians as studios and performance venues.

If you want to try some of the most eclectic Cajun cuisine, add Cochon to your “must-try” restaurant list. The atmosphere is more casual and relaxed. Popular among the young and hip crowd, Cochon has a great bar scene, but it’s the food that’s absolutely amazing; it’s a carnivore’s heaven.

Their specialty is serving just about every kind of meat imaginable. I call it “eclectic fusion with Creole touches.” There’s plenty to choose from on the menu, too, such as Fried Alligator with Chili Garlic Aioli; Cane syrup Glazed Pork Cheeks with Mushrooms & Roasted Corn Grits; Mustard Crusted Ham Hock with Herb & Rice Salad, Catfish Courtbouillonand; and Pork & Black Eyed Pea Gumbo, to name a few.

For a very traditional taste of New Orleans, the Acme Oyster House. You can kick back in a causal atmosphere enjoying buckets of oysters, cooked or raw, with a pitcher of beer. They’re also known for their red beans and rice, seafood gumbo, crawfish puppies, jambalaya, large selection of Po-Boy sandwiches, and more.

The New Orleans Historic Voodoo Museum and Voodoo Authentica can both be found in the heart of the French Quarter.

At the Museum you can learn about all THREE kinds of zombies, obtain your very own gris-gris love potion to help win over the object of your affection or even join a tour of the famous, haunted St. Louis Cemetery #1 (a.k.a the City of the Dead) including the tomb of New Orleans’ most renowned practicioner of the Voodoo arts, Voodoo Queen, Marie Laveau.

Voodoo Authentica Cultural Center and Collection holds an annual VoodooFest on Halloween, celebrating the history and culture of Voodoo while educating and entertaining visitors.

Hidden above The House of Blues nightclub, the Foundation Room is one of the most eclectic rooms in the world. It’s more like a spa for the mind, than a nightclub. The décor is heavily Asian influenced; a mixture of Tibetan templedécor and furniture lined with rich vibrant fabrics from the Rajasthan region of India and one of the largest collections of original artwork. You’re surrounded by rich purples, reds, and orange colors. It’s really like stepping into another world.

There are plenty of soft, cushiony chairs, couches, and pillows to sink into; wood carvings accent the walls. Suffice it to say, The Foundation Room has a very Zen-Karmic-Buddhist vibe to it. It’s rich, decadent, and you feel like you’re in an ancient mountaintop monastery somewhere in a remote part of Asia smoking a cigar. What the Foundation Room offers most of all is sheer serenity. If you want to hear the band, there’s a small corridor that leads you to The House of Blues’ balcony where you can look down over the entire club and watch the band, people dancing, drinking, having fun. It’s quite a departure from the tranquility of The Foundation Room.

Another famous landmark where tons of fun await you such as sing-a-longs, dancing, and college fight songs. Another thing that sets this New Orleans landmark apart from other cities is their Piano Lounge. Most of the songs performed are oldies rock ‘n roll, classic rock, Top 40, R&B and country. The players also take requests. Make sure you squeeze Pat O’Brien’s into your vacation schedule; it’ll serve you memories for years to come.

Be sure to venture away from the tourist areas. Check out the artsy and eclectic shops, bars, restaurants and people on Magazine Street and the Faubourg Marigny district.

The best time of year to visit New Orleans is when the weather is more comfortable. February and March are particularly good months to visit, especially if you want to partake in Mardi Gras. October and November are the other two best months to visit. It’s just one of those fabulous towns where you can never run out of things to do. Moreover, it’s one of the few cities that offers a lot of places where you can light up and enjoy your favorite cigars.

Born in New Delhi, India in 1961, Rakesh " "Rocky" " Patel, began his professional career as an entertainment lawyer in Los Angeles, where he was introduced to cigars on the back lots of Hollywood studios. One of the original founding members of L.A.'s famed Grand Havana Club, he sold his firm and spent five years in Honduras working and learning the cigar trade, including field and barn work. From his first Indian Tabac cigars in the 1990's to his current Rocky Patel Cigars releases, Rocky has insisted on using only the highest quality tobaccos, and the proof is in the numerous accolades and high scores his cigars have received. Often heralded as " "the hardest working man in the cigar business," " Rocky logs more than 300 days on the road a year - an extension of his enthusiasm for his award-winning cigars and his commitment to his customers.

Read More
Cigar Makers
Jonathan Drew got his start selling cigars from a 16 sq. ft. kiosk in the World Trade Center Mall. Today, Drew Estate is one of the biggest premium cigar operations in Nicaragua, home to such illustrious cigar brands as ACID and Liga Privada. See the 5 cigars JD says are most responsible for his success – and why.
Read More