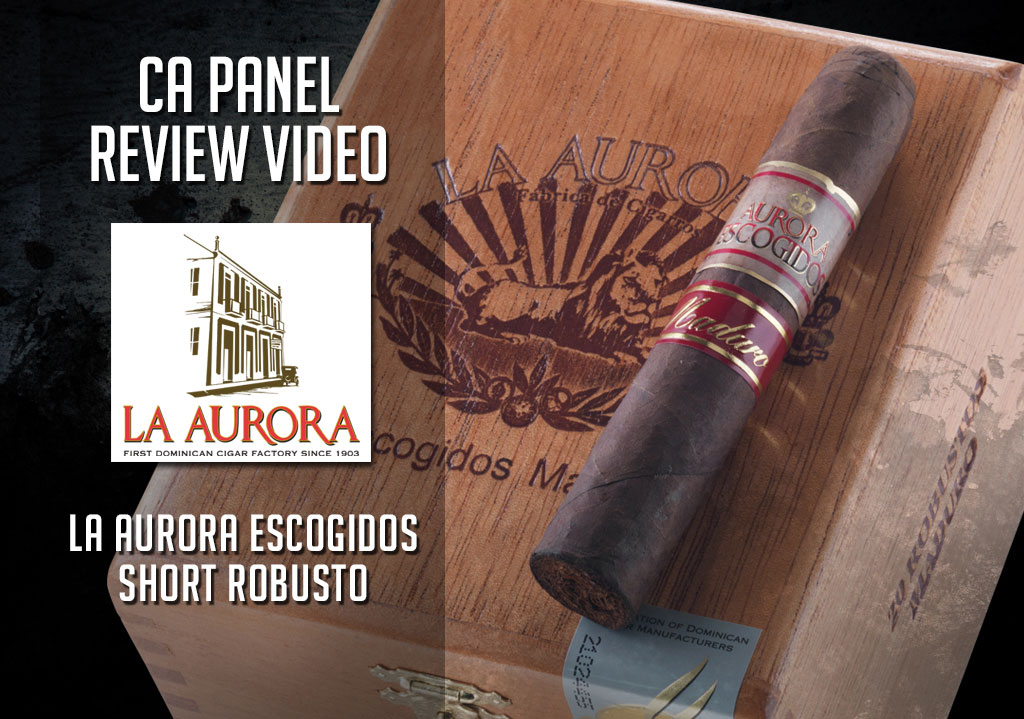 Meaning, “the chosen ones” in Spanish, La Aurora Escogidos cigars are a tribute to the Dominican Republic’s oldest tabacalera. At one time, the only place you could get one was on the La Aurora factory tour in Santiago, but now this cigar is available to all from Famous Smoke Shop. To see what the panel thought of the La Aurora Escogidos Short Robusto Maduro, click on the video – and as always – your comments are welcome.

Construction and Overall Appearance: A well-packed little Rothschild with a rustic, even-hued maduro wrapper, and a triple-seam cap.

Retrohale: Smooth with a little pepper.

Being that this cigar has a Brazilian maduro wrapper, I expected a smoke that was a little sweeter overall, but there was just enough in there to keep me satisfied for this Rothie. Not a complex cigar, but very smooth with well-balanced flavors of earth, wood and a note of cocoa in the mix. Peppery notes appear in the latter portion, but overall, a solid, full-bodied smoke that would be ideal after dinner with a long-aged rum, a fine Port, or your preferred style of coffee.

Construction and Overall Appearance: This La Aurora Maduro has a super dark wrapper – it’s borderline rustic, with almost ragged edges and a roll that’s slightly bumpy. This will drive maduro lovers wild. The Mata Fina wrapper has some sheen, but it’s not particularly oily.

Toasting & Light: Quick, but not necessarily easy – likely due to the thick wrapper.

Base flavors: Charred wood with a lingering subtle sweetness underneath. So tasty. Dried fruit, along with pepper.

Retrohale: Not as strong as you think – very aromatic.

Aroma: A subtle sweetness, mixed with cedar. Had a cappuccino sensation from time to time.

Burn / Ash Quality: Burn gets a little wavy; a touch-up may be required. Ash falls off at ½” to 1” increments, a little flaky and a mix of black and white.

Balance of flavors: While you may sense a variety of flavors, they don’t step on top of each other – so nicely balanced.

Consistency: I notice 2 or 3 big shifts in the flavors…They move in a herd – read below, and I’ll tell you what I mean by this.

Escogidos: it means “chosen” or “select” – and as Gary discusses in the video, getting your hands on La Aurora’s Escogidos has always been under very select circumstances.

The Brazilian Maduro is a thick and beefy leaf; it doesn’t always burn easily, meaning I did have a touch up early on with my baseline smoke. The second of the La Aurora Escogidos burned like a champ, however – and the flavors came and went in bunches. Throughout, I got some tastes that reminded me of charred wood, leather and pepper – along with a lingering sweetness. But then they all shifted, and that’s what I mean by “moved as a herd.” By the end of the first third, the herd of flavors ran in the direction of dark roasted coffee and dried fruit on top of that woody-peppery foundation. A little while later, the herd moved again – cedar and leather with a whiff of vanilla spice, similar to that bite-y spice that hangs in the air when you walk into a bakery. So the herd moves this way…another third, the herd moves that way. Subtle flavors that come in bunches, and all moving in one direction. The pepper comes and goes throughout.

This is a small yet surly smoke – not so much on strength at the beginning, but the Escogidos really fattens up in the last half and gets meaty. Give it a chance to develop. Oils are evident in the mouthfeel – the smoke is THICK…almost chewy. Yes, it’s creamy too, but those flavors lean more to the dark side of the spectrum. The draw is a little towards the loose side, so shallow draws will keep you from heating it up too much.

One thing I will say is this is a great cigar to try retrohaling – the Escogidos Maduro has a little of that vanilla spice to it in the retrohale, but with milder wood and leather sensations.

Don’t underestimate the La Aurora Escogidos Maduro: it looks unassuming, but by the end it’s a pretty heavy duty smoke for something they called “medium” in body.

Construction and Overall Appearance: slightly toothy with one vein and a deep brown/black color. No soft spots.

Burn / Ash Quality: Baseline cigar’s burn was wonky; the one I smoked for our video was almost dead-on.

Balance of flavors: Pepper and sweetness struggled with each other. Balanced out by the end.

Consistency: Relatively consistent from cigar to cigar, burn issues aside.

La Aurora Escogidos or “special selection” is a darkly delicious medium-full bodied smoke. It’s a shame that these premiums come in limited runs only. The maduro Brazilian wrapper is almost black and slightly toothy.

The pre-light reminds me of chai; there’s a definite herbal note, as well as earth, leather and hay. After a few puffs, the initial pepper fades into a chewy thick smoke with a sweetness and notes of cocoa and charred wood. The flavors tended to shift around, sliding from the pepper side to the sweet side quite a few times, which was very surprising for such a small size. Around the second third I detect a smooth oak wood, like you would expect from an aged bourbon. The whole time I’m smoking, this Escogidos is chugging away at the smoke; it looks like somebody funneled a chimney into the room.

As the last third is ringing home I have to admit that this had a very smooth, flavorful, and complex profile. Escogidos hits a nice equilibrium of pepper and sweetness in the end with notes of expresso, leather, charred wood, and oak all coming together. The short robusto size makes this easy for a quick after dinner smoke, although I would enjoy this after lunch or in the mid-afternoon. Construction-wise, while the baseline had some canoeing issues the final smoke was perfect – no issues and a very firm ash. If you’re looking to try La Aurora as a brand, this is my recommendation to introduce you to their work – flavorful and complex, yet a short smoke that comes at a palatable price.

It really doesn’t seem possible; I mean a box of cigars this tasty that goes for under $40… but I’m telling you that it’s true. This La Aurora Escogidos is one hell of a little fire plug that is full of rich maduro flavor. It’s one of those sticks that starts out medium, then an inch and a half in, POW, BANG, ZOOM, right in the kisser as a blast of full-bodied goodness pounces on your delighted palate.

First off, this cigar has an amazing draw that lets off an absolute ton of smoke so make sure you’re in a well-ventilated area when lighting up. Now… at first puff, you are instantly hit with a nice sweetness like cinnamon and cocoa. I mean it’s really pleasant and makes you want to keep on smoking to see what happens next. About a third of the way in I started getting dark fruit notes, like plums or cherries as that wonderfully natural maduro sweetness kept on stepping forward. Then, I’d say halfway in, notes of spicy pepper set forth as this little dude started tossing out some serious bravado. Okay, so I use the term “flavor-bomb” a lot but I just can’t think of anything else to describe this one!

While the tobacco inside is Dominican grown, I’m guessing there are some healthy doses of ligero to give it that oomph, and then that dark and oily Brazilian Mata Fina maduro wrapper leaf balances everything out with delicious sweetness. With its smaller size and flavor profile, I’m calling this out as the perfect after dinner dessert smoke that would go great with a coffee or espresso, and WAY less fattening than that hunk of cheesecake in the fridge.

So again I say, how in the name of God is a box of well-made tasty smokes like this under $40 for twenty sticks? I really don’t know, but do not look the proverbial gift-horse in the mouth and order yourself a box today.

Please find some way to get some of these ,have been in love with them for several years . have found them on line at neptune cigars in Dominican republic but they only take bit coin payment .thank you

Read More
Cigars 101
This month, we tackle four premium cigar questions that, if you use our answers, might make you the smartest person in the room – or the bar, anyway. Each Cigar Q&A is in a quick and easy-to-use video format; watch them now and share with your cigar smoking pals!
Read More