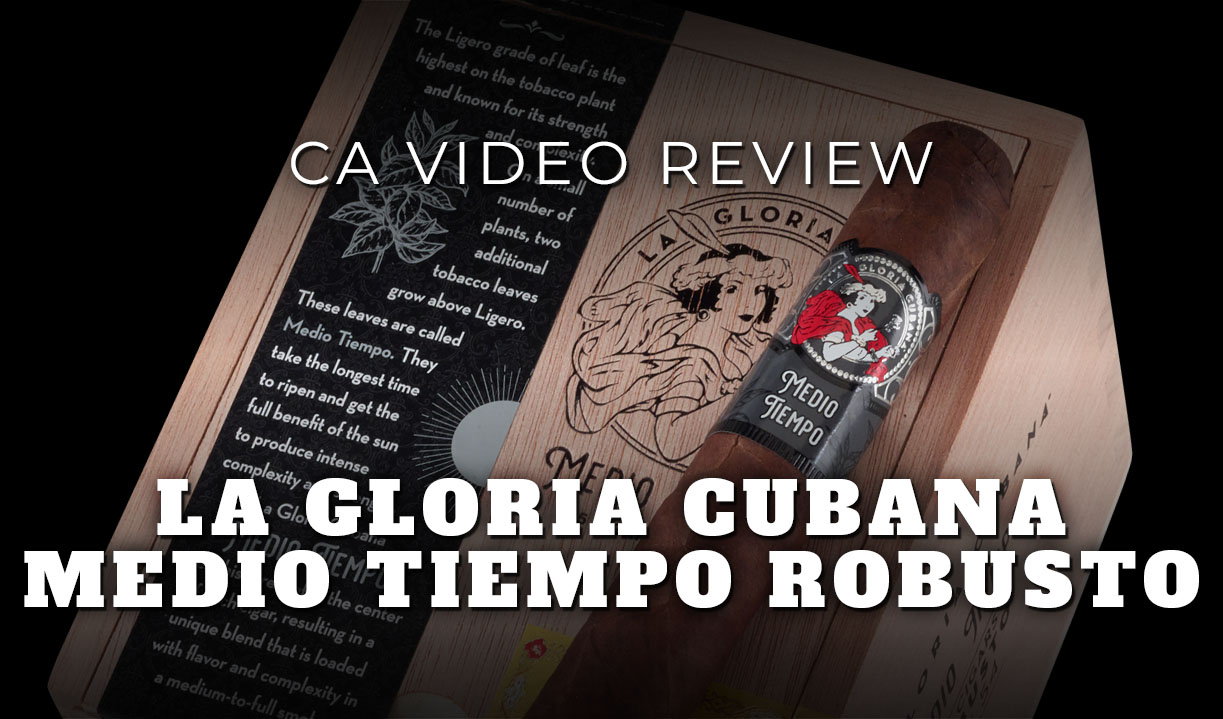 La Gloria Cubana Medio Tiempo is a full production cigar line that was released in May of this year. It was also a line that began with a challenge. In this case, the aces at El Credito were tasked to create an artisanal style cigar blended with rare Medio Tiempo leaves. When added to the right combination of tobaccos, Medio Tiempo provides additional layers of flavor and complexity to the smoke. And for this La Gloria Cubana selection, the leaves were carefully chosen from a crop of sun grown Connecticut Havano. 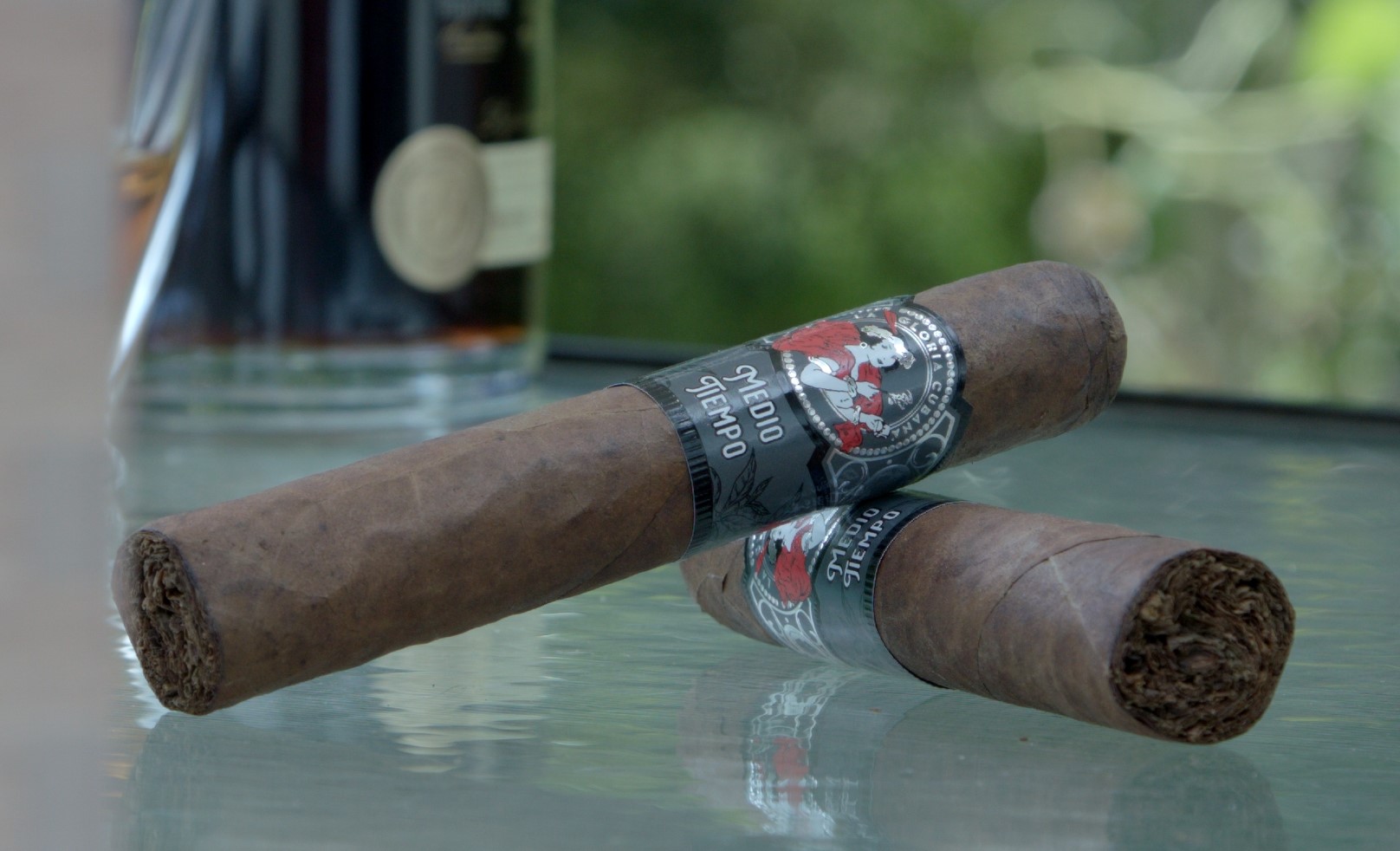 So, what is medio tiempo tobacco? Medio tiempo leaves appear as two additional leaves which sprout above the highest priming ligero leaves. (You’ll also find this explanation printed on the back of the cigar’s band.) As a result, they get more sunlight, more nutrients, and develop very unique taste characteristics. Adding hand-selected Honduran, Nicaraguan and Dominican tobaccos, plus a Connecticut Broadleaf binder and a rich Ecuadoran Sumatra wrapper, the intention was for cigar smokers to discover the positive impact medio tiempo has on this line’s body and flavor. 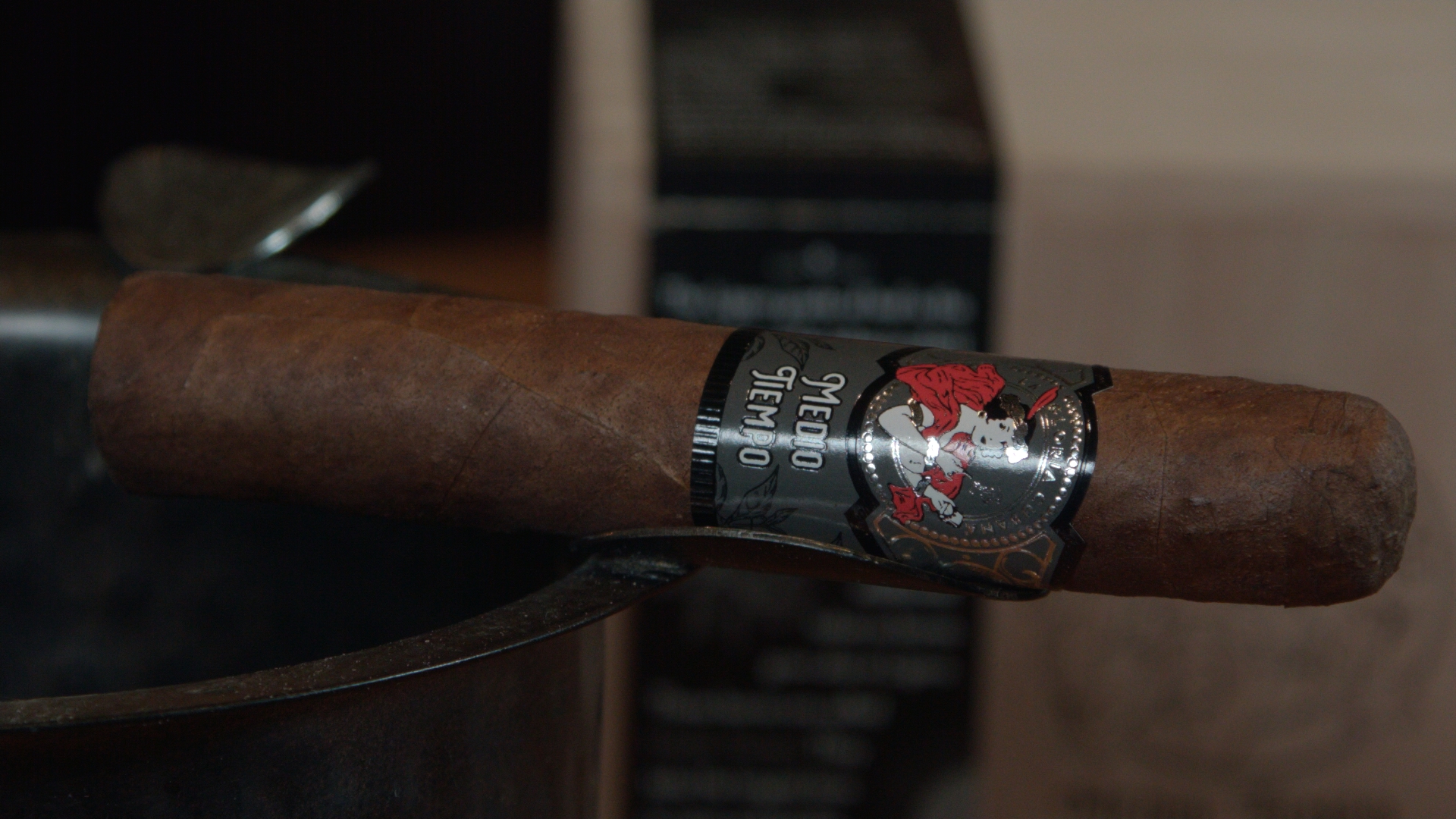 Summary: This was a very enjoyable cigar for me. Medium bodied, it came with a well-rounded set of flavors starting with earth, sugar, and pepper on long finish. I was pretty taken aback at how much sugary sweetness was coming off this cigar, too. It made me question whether the cap was sweetened. By the midsection, the pepper transitioned to a sweet layer of cinnamon spice. But most impressive for me was how more flavors, including leather, graham cracker, and nutmeg came onboard in the late innings. 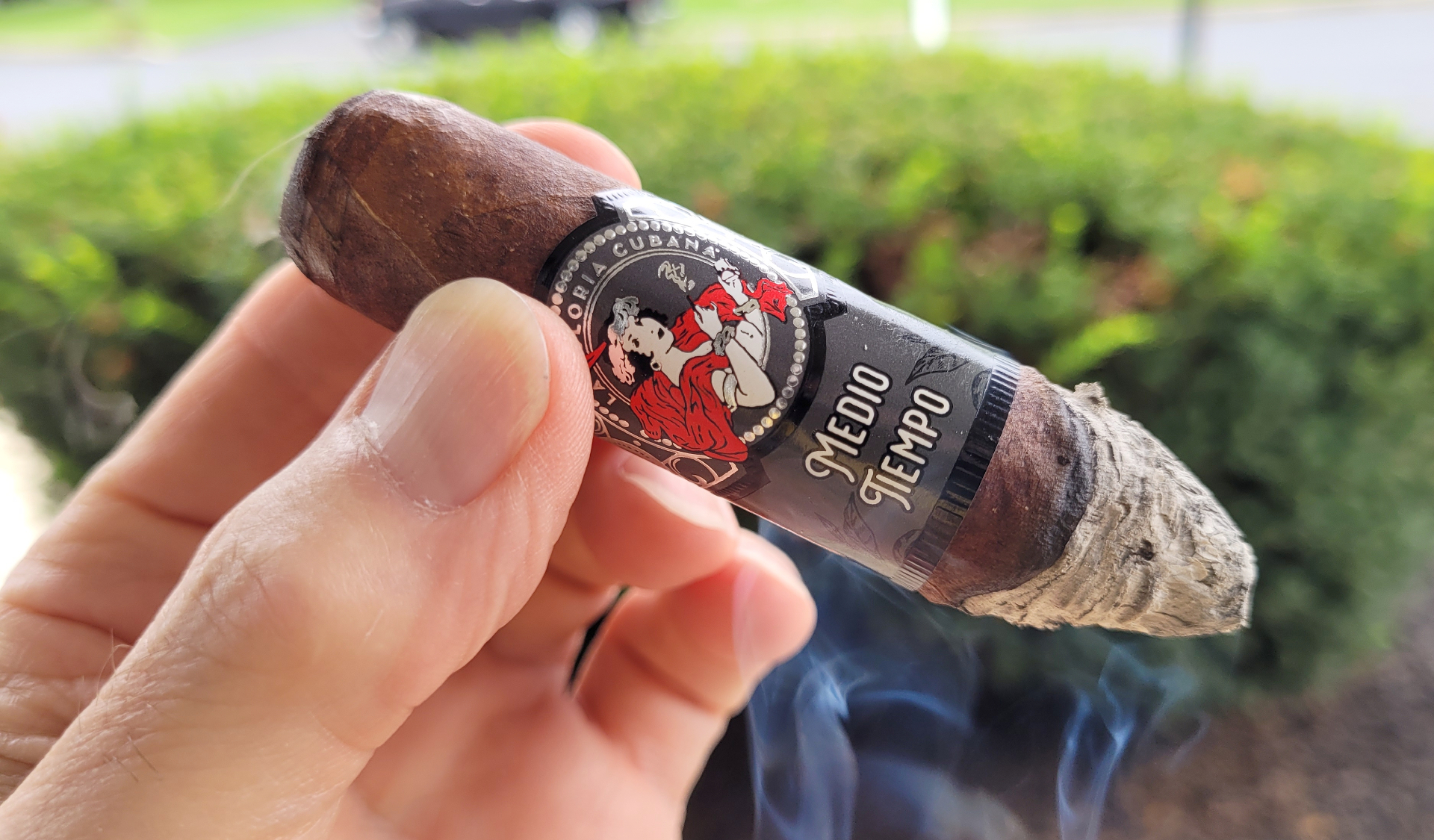 Suffice it to say… If you don’t like sweet tasting cigars the Medio Tiempo is probably not for you; that is, unless you want to see how these medio tiempo fillers really do play a part in the flavor profile. What we also have here is a cigar that’s much more complex than I expected. And for well under $10 (at press time), it’s a really good value, and even newer cigar smokers can have at this cigar for its price. So, it gets my recommendation.

Summary: I’m a natural skeptic. When I first received this stick, I couldn’t help but wonder, “what’s in a name?” Was ‘Medio Tiempo’ just another way to describe ligero? Would this tobacco priming add anything different to this blend? Or would this cigar be another ligero bomb—like the Oliva V?

That was my mindset as I sat down and put the La Gloria through its paces. And I’ll state up front, I didn’t expect to enjoy this cigar as much as I did. In fact, if I was handed the LGC Medio Tiempo un-banded I would never have guessed that it was a cigar that was so accessible and affordable. 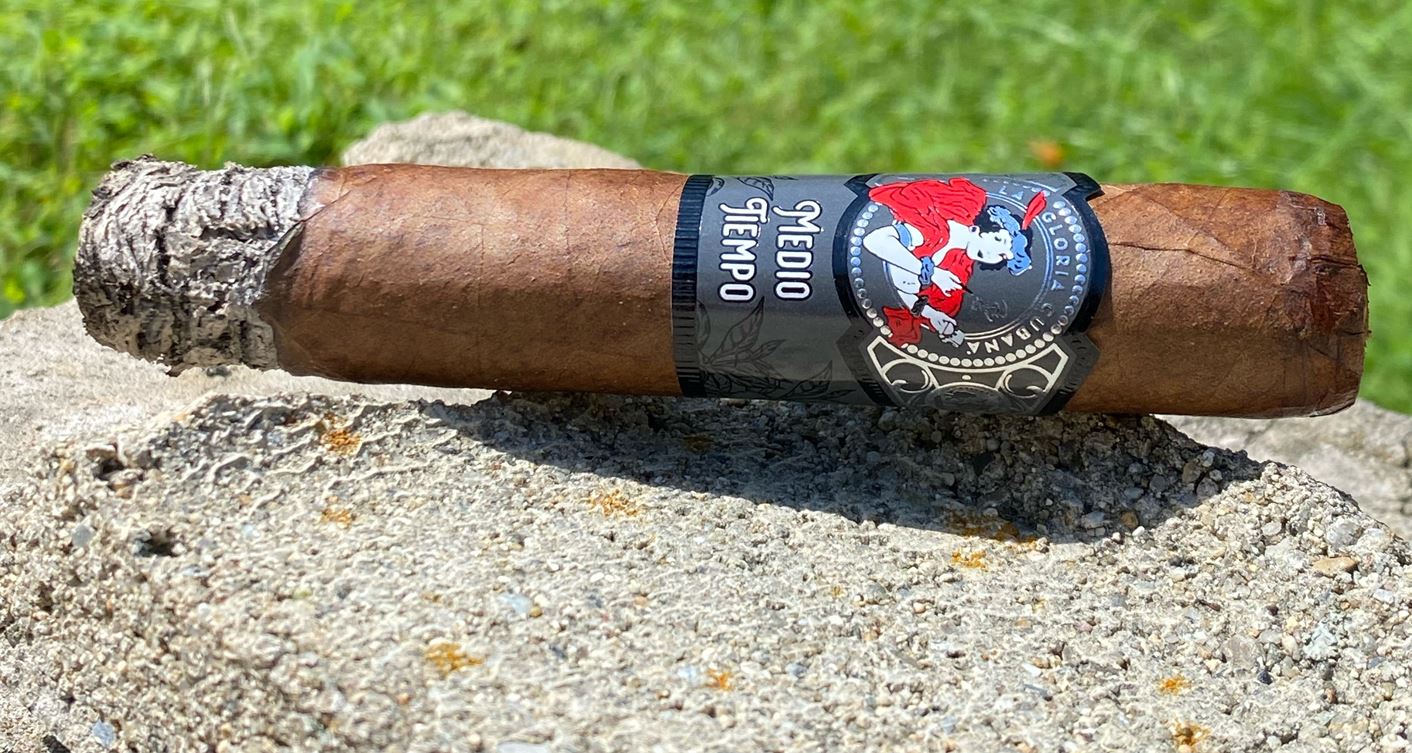 The most surprising element in the Medio Tiempo was its sweetness. It wasn’t in-your-face, but present and very pleasing to my palate. Other flavors included spice—on the peppery end of the spectrum—cream, and cedar. The intensity was a tick above medium, and the strength never became overbearing. But it was the complexity and transitions that really stood out.

A friend once let me drive his modified Mazda Miata—with a rotary engine and roll bar—at track day. This was after I relentlessly teased him about modifying a ‘go-cart.’ It turns out that I had more fun driving that little car that day than my own. I tell you this story to tell you another—I thought the La Gloria Medio Tiempo was going to be an average, run-of-the-mill mid-range cigar, and I was extremely wrong. I’m going to be having more of these in the future—in fact, I may buy a box. And I don’t do that often.

Summary: Remember when Sobremesa Brulee came out and everyone was convinced that Steve Saka had secretly included a sweetened cap? I’m surprised that a similar scandal hasn’t found its way to La Gloria Cubana Medio Tiempo.

And honestly, had I been forced to define the cigar with one word…

That Medio Tiempo cigar is sweet. Review over.

In no uncertain terms, it is that simple. From pre-light to the nub, there wasn’t a single puff where sweetness wasn’t center stage. And it only builds as it burns.

Let’s talk about flavor. Medio Tiempo’s first few puffs are of the earthy variety. Add some leather, a few spices, and a generous slathering of sugar cookies without the jimmies. The cookie hints are sometimes more like graham cracker – maybe even a little gingery at times – but it’s consistently sweet. Yeah. I know I’m saying that word a lot (but I’m done now). 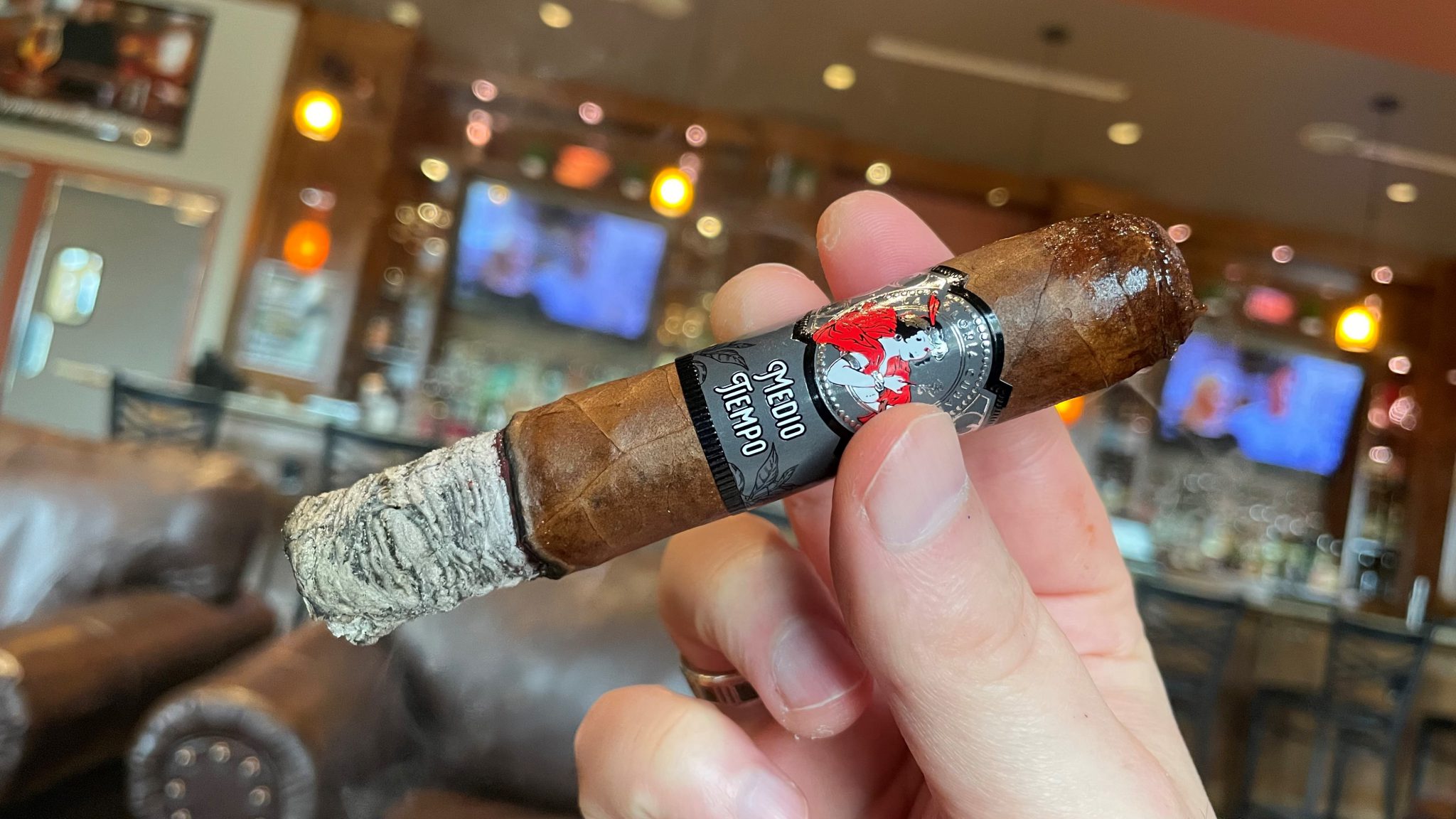 The halfway mark shifts slightly toward citrus, before losing some steam in terms of pepper toward the finale. But the base flavors tend to all stick around for the long haul – including the pepper if you’re so inclined to retrohale.

What I love most about La Gloria Cubana Medio Tiempo is that it tastes like a well-aged cigar right out of the box. And that’s been the story for all my samples, even the ones I had before we scheduled this review. There’s nothing harsh about the flavor. No edges that need sanding. It’s ready to be smoked now. And I think that’s a huge advantage for smokers who don’t always have the patience for aging cigars.

Construction: Walnut brown Sumatra wrapper has a speckled finish, and a pretty good amount of oil. Seems really well-made.
Draw: Great airflow; only that minimal resistance that helps you get a good rip of smoke.
Pre-light flavor: Smell is leather and cedar; taste is very defined cocoa, meat, nuts and a tingle of spice on the tongue.
Toasting & Light: Toasts up quickly, with a more-than-fair amount of smoke production. Flavors include black pepper, wood, nuts and well done steak.
Base flavors: A couple different kinds of sweet, along with wood, earth and pepper.
Retrohale: The pepper is crisp, a little sweet, and a lot more earthy.
Aroma: A great mix of wood and baked dough.
Burn & Ash Quality: A pretty fine burn line; a black and grey ash holds together ok.

Summary: Pre-light (if you care about that sort of thing) has a little bit of a “wow” factor – so if you normally don’t pay it any mind, this might be a reason to take the time to check it out.

And away we go: settling in to profile laced with raisin sweetness, pepper and wood. And yes, that sounds like the last 100 cigars I’ve told you about. But the La Gloria Medio Tiempo’s take on these flavors don’t land in the same way. These come with a different intensity; the proportions are different, the body, the nuances…LGC does these flavors really well. 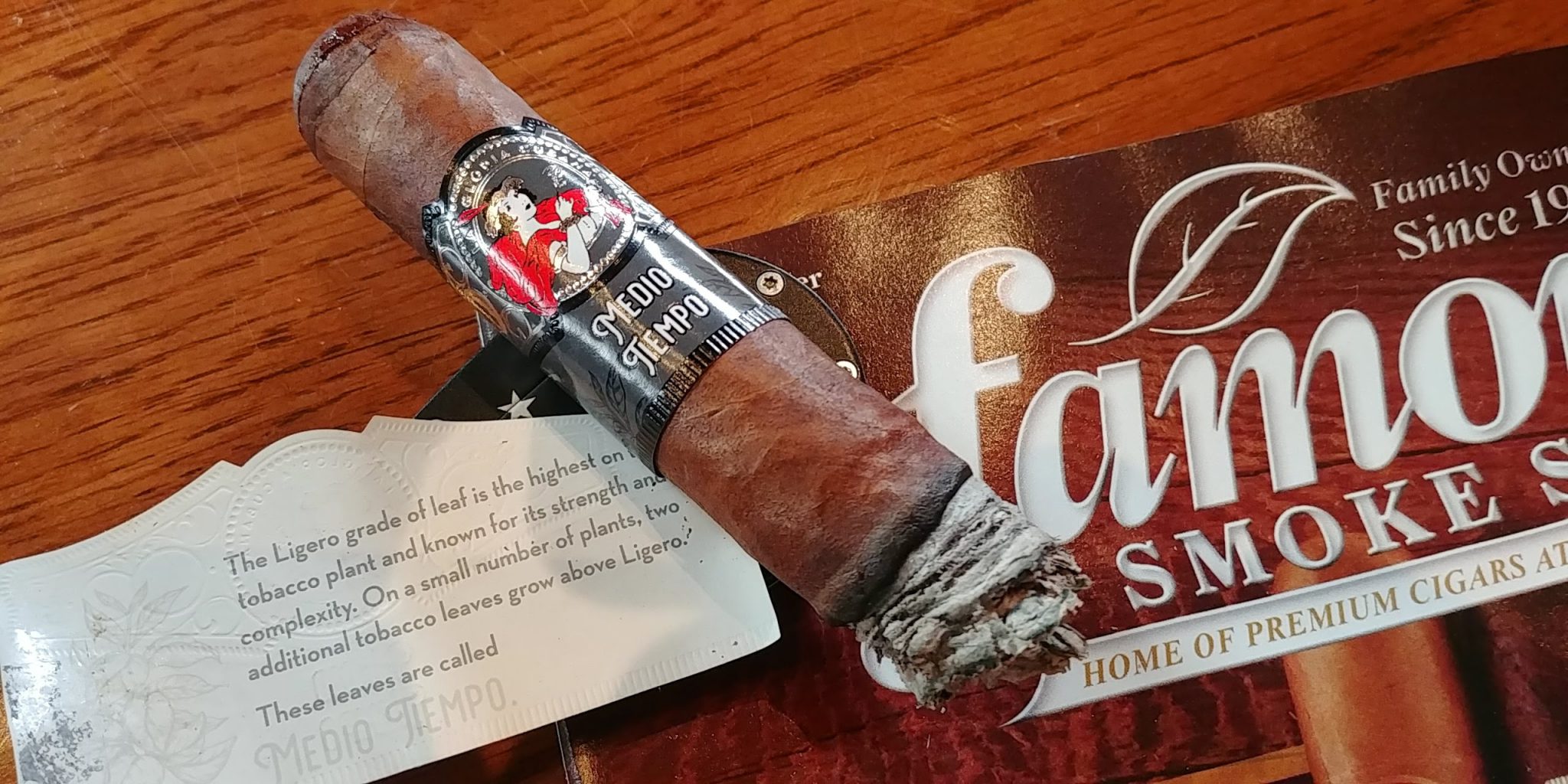 La Gloria hits some really deep pockets of complexity: cocoa powder, wood, nuts, earth, raisin, oak, vanilla and pepper all develop at various points. Medium in strength, a little more full in body; the smoke is borderline creamy, a very satisfying little package. And while my palate has its limitations, if you like a sweeter cigar, then this is definitely in your wheelhouse.

One more thing – this LGC Medio Tiempo has a great aroma. My wife caught some of the smoke on the wind and said, “you should buy more of these.” I will take her advice; if you decide to follow that suggestion, I think you’ll have a great around-the-firepit smoke this fall.

Great reviews and all spot on ! I lucked up on the Medio Teimpo while visiting a small cigar shop in Chicago early this summer . I was pleasantly surprised and immediately ordered a box , and I couldn’t be happier . Great smoke , with tasty undertones and delicious aroma !

Reading Time: 4 minutes Earlier this year, Gary reviewed the Onyx Estelí for this column, and now comes Onyx Bold Nicaragua. Both share Mexican San Andrés maduro wrappers, but tell quite different tales. If you want the full story, this review of the Onyx Bold Nicaragua Toro reveals all.