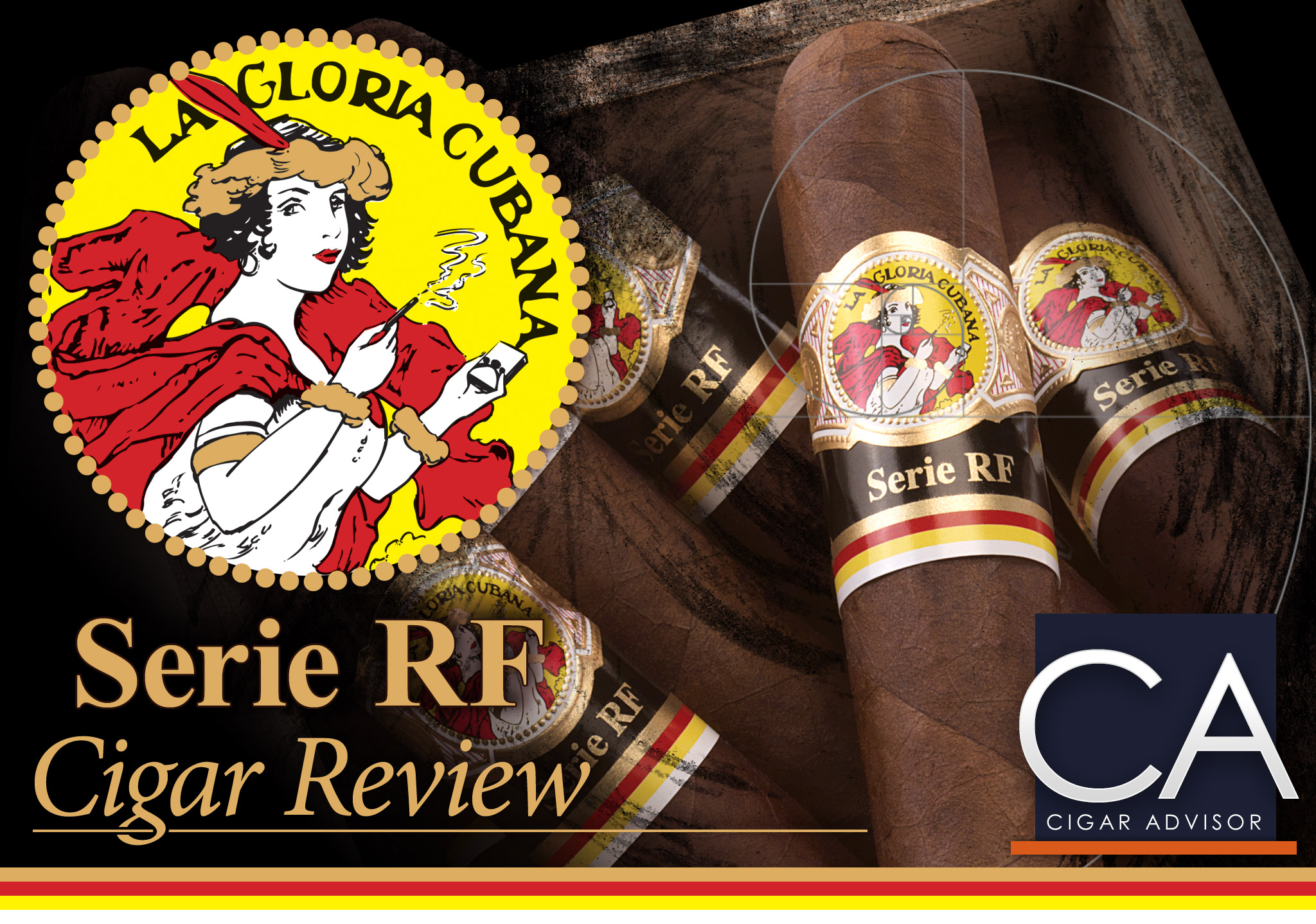 The Cigar Advisor cigar review panel is back…and this time, we’re taking an up-close and personal look at the new La Gloria Cubana Serie RF No.13, a big, beefy robusto. This newest addition to La Gloria’s best-selling Serie R selection is an exclusive blend from La Gloria Cubana’s Grand Potentate Michael Giannini. If you want to know what the “F” stands for, you’ll have to watch the review; it’s actually quite interesting. If you’d also like to read our individual notes on the No.13 in greater detail, each of our impressions are listed out underneath the video. Remember, the panel doesn’t do scores – we just tell you what qualities we’ve found within the smoke, and whether we think you’ll like it…or not. Watch it now!

The Serie RF is a cigar that doesn’t mess around by slowly sneaking up on you. It’s more like a boxer who doesn’t use fancy footwork, he just comes out swinging and whomps you with a wicked shot of pepper and spice to the palate. Yes indeed, this stick is front-loaded with potent ligero goodness and lets you know that you are indeed smoking a cigar.

This is an incredibly well-crafted cigar producing a perfect draw that billows with thick, creamy smoke. The good thing is that upfront ligero whack you get upon the first twenty percent of the cigar instantly settles down as its complexity starts to emerge with a flavor profile that is smooth and long lasting. I got a distinct taste of black licorice (like a Sambuca), with some hickory wood and chocolate.

In my opinion, this full-bodied beast sure ain’t a breakfast smoke. The Serie RF is the perfect after dinner cigar that I think would pair amazingly well with a nice scotch or a cold craft brew. I definitely enjoyed this one and will make it a part of my weekly rotation.

Construction and Overall Appearance: Excellent. Beautiful dark wrapper; even in hue and well-packed with no soft spots.

Draw (airflow): Excellent. The smoke was very thick and creamy with a great draw that draws the smoke right out of the head, even when just holding it.

Toasting & Light: Good. The ligero in the blend may cause it to take a bit longer.

Retrohale: Smooth and earthy (if you let the cigar burn down about one half inch or so).

Base flavors: Sweet woods and pepper.

Burn / Ash Quality: Very good. A little “off” in some spots, but not enough to be a problem.

Balance of flavors: Excellent. Once the cigar rounds-out, you can taste a hint of everything floating around in there.

Summary: A well-made cigar that seamlessly reflects the La Gloria Serie R selection flavor profile. The tobaccos are well-packed, the burn is true, and the smoke is well balanced. Starting with a hot shot of pepper that screams “WAKE UP!” the spice soon rounds-out to a smooth and creamy smoke with a strand of peppery spice remaining on a long finish. The dominant flavors offer a hearty helping of earthiness, sweet oak and cedar wood flavors, plus pepper, which comes and goes at various stages during the smoke.

I would recommend this cigar to those who can really appreciate a full-bodied and complex cigar. It would help if they were already familiar with the heavier La Glorias, too. That said, novices ready to make the jump to dark, full-flavored cigars with a serious dose of spice may find the La Gloria Serie RF No.13 robusto a little out of their comfort zone, but will not be overpowered by it. It may take a couple of these to adjust their palates (and their heads).

If you’re looking for an affordably-priced cigar that reflects the way a true full-bodied cigar is supposed to taste, make room in your humi for this one.

Construction and Overall Appearance: Great construction with a dark and oily wrapper; not too veiny.

Draw (airflow): The draw was a little too tight for my liking, but others I have smoked in the past have been completely on point.

Retrohale: There was so much spice, I was afraid I’d blow my sinuses clear out the back of my head if I tried.

Base flavors: After I got into the cigar a bit, the spice went away to reveal a sweet tobacco flavor with some woody characteristics.

Aroma: Pleasantly similar to the smoke to help round out the full experience.

Burn / Ash Quality: Prefect burn on every RF I have tried, with a solid grey ash. It really shows the quality of tobaccos used in this cigar, and how well it was rolled.

Consistency: From one cigar to the next, it’s always the same experience.

General Observations: Visible oil ring about an 8th of an inch below the ember while smoking. This is a sign of extremely rich tobacco, and an indicator of a real smoky cigar.

I really grew a soft spot for La Gloria Cubana Serie RF Cigars. Having smoked and being a huge fan of the Serie R, I was wary that the RF would never hold up to its older brother. However, having smoked the RF, I can honestly say this newcomer to the market really makes a case for itself and I believe it will form a cult following in short order just as its legendary predecessor has. Full and rich flavors perform throughout the smoke, with the stars being wood and sweet tobacco, all preceded with a hit of black pepper right upon lighting the cigar that grabs your attention and smacks you around a bit. But those who may shy away from peppery cigars, worry not. This sensation only lasts for around a quarter of an inch to half an inch into your smoke before almost completely disappearing. Once the pepper is gone, the cigar is all about loading up your palate with smooth flavor. The pepper is reintroduced towards the end of the cigar, but only remains as a supporting note rather than jumping back into the limelight as it had upon firing up the stogie. Overall, it’s an incredible medium to full bodied cigar whose strength may creep up on you if you smoke too fast, and another win for Michael Giannini, the mastermind behind the La Gloria Serie RF.

I would suggest there not be so much pepper up front that just goes away after smoking for 10 minutes, only to reappear 10 minutes before tossing the nub. It would be nice to get a smaller hit of pepper right in the beginning, and have it drop in intensity throughout the entire cigar, with a finishing note of real mild pepper, sweet tobacco, and woody characteristics. Otherwise, the La Gloria Serie RF No.13 had great flavors, construction, and burn; just about everything on the cigar was spot on. An enjoyable experience overall.

Construction and Overall Appearance: The construction is SPOT on. Actually, I have yet to find a La Gloria that’s disappointed me in this department.

First few puffs: Whoa mama…the pepper mill is grindin’. I compare it to what a big heap of wasabi does to your senses: your eyes start to water, beads of sweat start to appear on your brow, and you’re pulling to get a full breath of air to turn the corner on that sinus overload. It hurts so good – and you’ll find yourself going back for more.

Retrohale: It’s best to let this cigar settle in an inch or two before you do a retrohale – otherwise you risk having that wasabi overload experience I talked about before.

Base flavors: Sweet tobacco (that’s the CT Havano binder and Ecuador wrapper at work), along with potent ligero, some dark coffee from the Nicaraguan tobacco, and a good bit of tang from the Dominican. A good mix that gets even more complex, once you get about halfway in.

Burn / Ash Quality: The burn was a little wavy at times, but not uncommon for a wrapper this oily. Very compact, very firm ash.

Balance of flavors: I don’t use the term “balanced” very often, because it’s hard to chase down an appropriate use of the word; but in the case of Serie RF, once the pepper settles down after an inch or so, there’s no one particular flavor that dominates. And that’s another good quality Serie RF has.

Consistency: From cigar-to-cigar, I found Serie RF to be about a “90” in consistency. Some differences, but I attribute it to what I might have been drinking the first time around.

Summary: This is a full flavored cigar, no doubt – and if you smoke em full, you’ll like Serie RF. If you’re looking to step up from medium to full, I recommend you be full – as in, make sure you smoke it on some food or something, or it’s going to bite you about ¾ of the way through. It mellows nicely about halfway through, but still hits the inside of your eyes and nose with pepper when you retrohale; but that’s also where the complexity kicks in the most. Definitely a smoke that’s worth taking a slow pace, so that you may savor the ingredients.

Read More
Cigar Buying Guides
This Mother’s Day we’re taking a look at the Cigar Smoking Moms of the Cigar Industry – the "leading ladies of tobacco," if you will. Join us for a sit-down with the matriarchs of the premium cigar world to find the best cigars for you to smoke this Mother’s Day. When it’s comes to cigars, Mom’s the word.
Read More