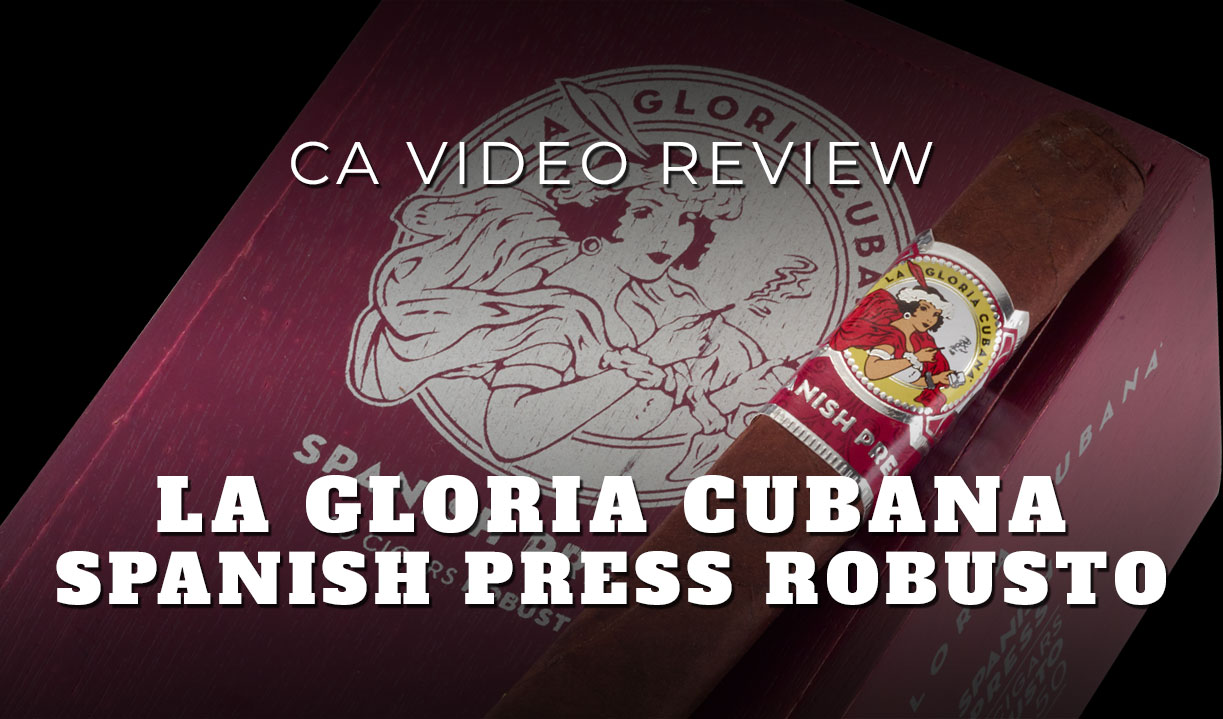 La Gloria Cubana is one of the cigar industry’s greatest success stories. Their latest creation is Spanish Press, and for it, they’ve combined old-world techniques and contemporary flavor. Additionally, it’s their first cigar to feature the new look of La Gloria’s redesigned logo.

We’ll get into the flavors in short order below, but what exactly is that old-school stuff La Gloria’s clamoring about? If the name didn’t already spoil it, it’s the blend’s Spanish, or sometimes called Cuban, pressing. And there’s a little more going on than what you’d see in traditional box pressing. Once rolled, the cigars are set in wooden trays with dividers that apply even pressure. Afterward, these trays are placed in a wooden press to give each stick a rectangular shape all around. Finally, the cigars are placed in special boxes to assist them in keeping their shape long after they are packaged.

Spanish pressing is labor-intensive and time consuming. There is a reward, though, for such tedious work. Much like the process of entubado bunching, Spanish-pressed cigars typically provide a better draw with more even airflow. They smoke cooler, and some argue that the boxy shape feels better in the hand.

Apart from the unique process of shaping the cigars, LGC’s also included a six-leaf-medley of prime tobaccos. Nicaraguan Jalapa, Brazilian Mata Fina, and Dominican Olor and Piloto Cubano serve as the core. They’re bound by a Mexican San Andrés leaf and then wrapped in Nicaraguan Jalapa.

“We developed a very special blend to showcase our unique technique and believe we have delivered a fantastic addition to the La Gloria Cubana portfolio,” said Yuri Guillen, El Credito (LGC Factory) Production Manager in a press release.

The La Gloria Cubana Spanish Press selection is presented boxes of 20 cigars in the following sizes:

If you’ve already smoked this cigar, or decide to join us in smoking one, let us know what you thought by leaving a comment.

Construction and Overall Appearance: Excellent. The wrapper was even in color with some slight tooth. The pressing was very good with semi-sharp edges. The rolling was virtually seamless, and the cigar had a comfortable feel in the hand and mouth.
Draw (airflow): Excellent.
Pre-light flavor (cold draw): Leathery and sugary sweet.
Toasting & Light: The cigar lit fairly quickly and evenly, revealing a very creamy smoke with initial flavors of sweet tobacco, leather, and cedar.
Base flavors: Sweet tobacco, sweet cream, leather, cedar, minerals, nutmeg, coffee bean.
Retrohale: Quite creamy with no specific flavors in the early stages. By the second act it turned spicy including a slight floral note.
Aroma: Redolently sweet.
Burn / Ash Quality: Very good. The cigar burned evenly with a dark grey ash that consistently bailed in one-inch nuggets.
Balance of flavors: Excellent. Although some of the aforementioned flavors revealed themselves at various stages, they were clearly defined, and the cigar remained balanced throughout.

Having smoked a number of these cigars in every size since their release last year, the La Gloria Cubana Spanish Press Robusto has been the most impressive. For one, it is markedly sweeter than the Spanish Press Gigante I reviewed last July, and even more so than the Toro. I’m talking, literally, sugary sweet.

During the initial stage, the smoke was medium in body and strength, dense, creamy, sweet, and balanced with flavors of sweet tobacco, leather, and cedar. Transitioning to the midsection, the smoke intensified slightly with mostly all of the same base notes, and an additional note of coffee bean, which was more evident to my colleagues than to me. Some peppery spice lingered on the finish, while the cedar, sweet cream, and sweet tobacco remained very present in the mix. 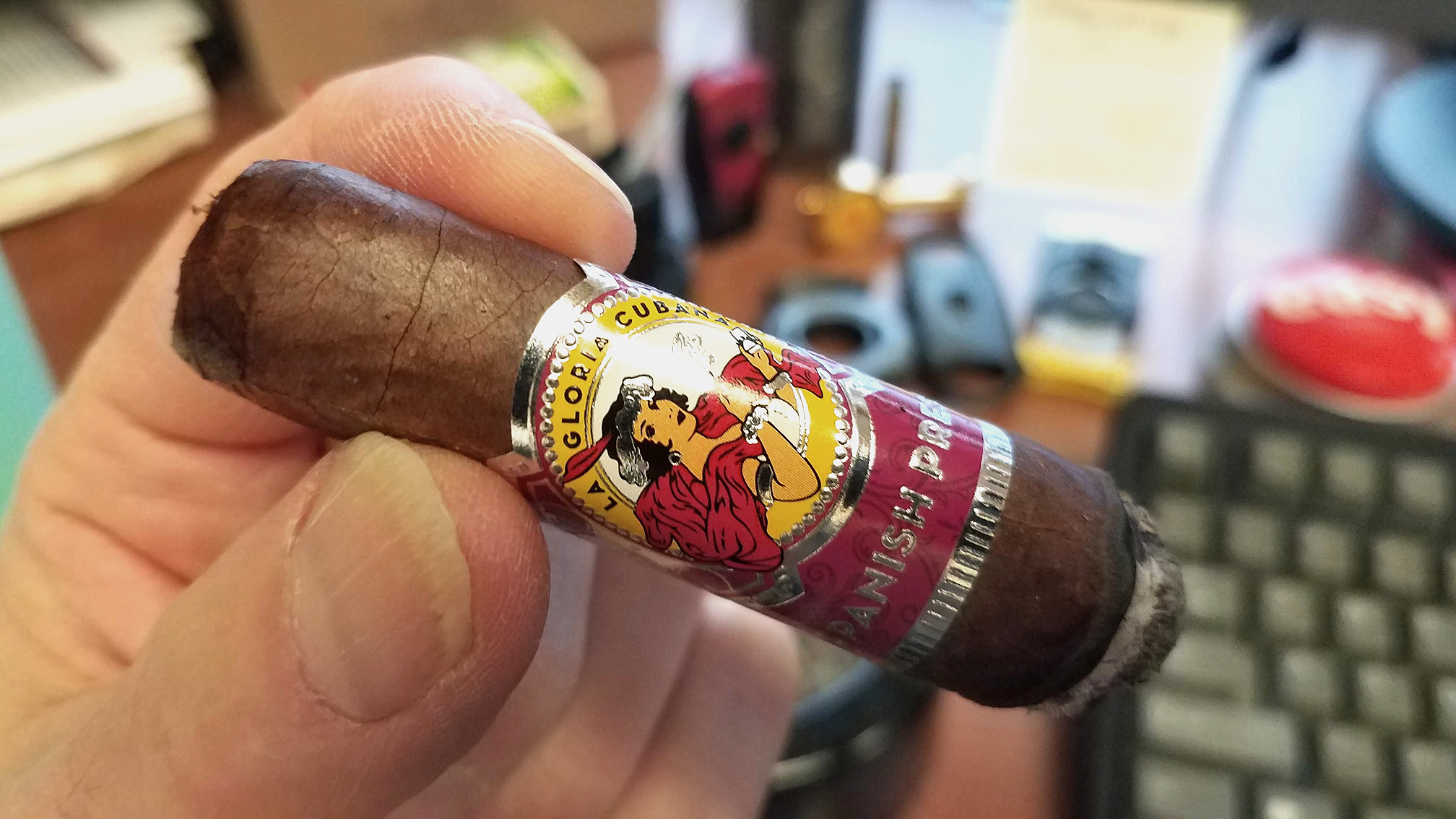 In the final stage, the cigar took an earthier turn (more like mineral flavors), while the sweetness was finally edged-out of the frame, but not entirely. I must also say that the sample I smoked on camera was much sweeter than the base sample, which lost its sweetness in the latter half of the second act.

Suffice it to say. . . If you’ve got a few notches on your gun belt and like cigars with a diverse array of tobaccos, a medium-plus body, and enough complexity to keep you interested, the La Gloria Cubana Spanish Press should do the trick. Smooth and flavorful enough to enjoy daily, and reasonably priced, this La Gloria selection is one of the best values going.

Construction: Most of the pressing remains and the wrapper is dark reddish brown with a few prominent veins. The cap holds up to a deep v-cut.
Draw: Smooth with just the right amount of resistance.
Pre-light flavor: Fruit with a tad of pepper on the tip of my tongue.
Toasting & Light: Espresso and gentle spices. Smoky, almost like fire-cured tobacco.
Base flavors: Tangy citrus, butter, coffee, sweet earth, and dark chocolate.
Retrohale: Peppery, but smooth, and slightly floral.
Aroma: Nutty and sweet.
Burn & Ash Quality: Excellent burn line and a tidy, marbled ash.
Balance of flavors: Dead on.

Spanish Press has a lot going on. A big basket of tobaccos and antiquated craftsmanship for starters. But the third variable – the cigar’s flavor – is arguably most important. If it doesn’t taste good, it doesn’t matter if the Queen of England rolled the cigar. All that stuff becomes fluff.

Lucky for me (and you), Spanish Press isn’t lip service. 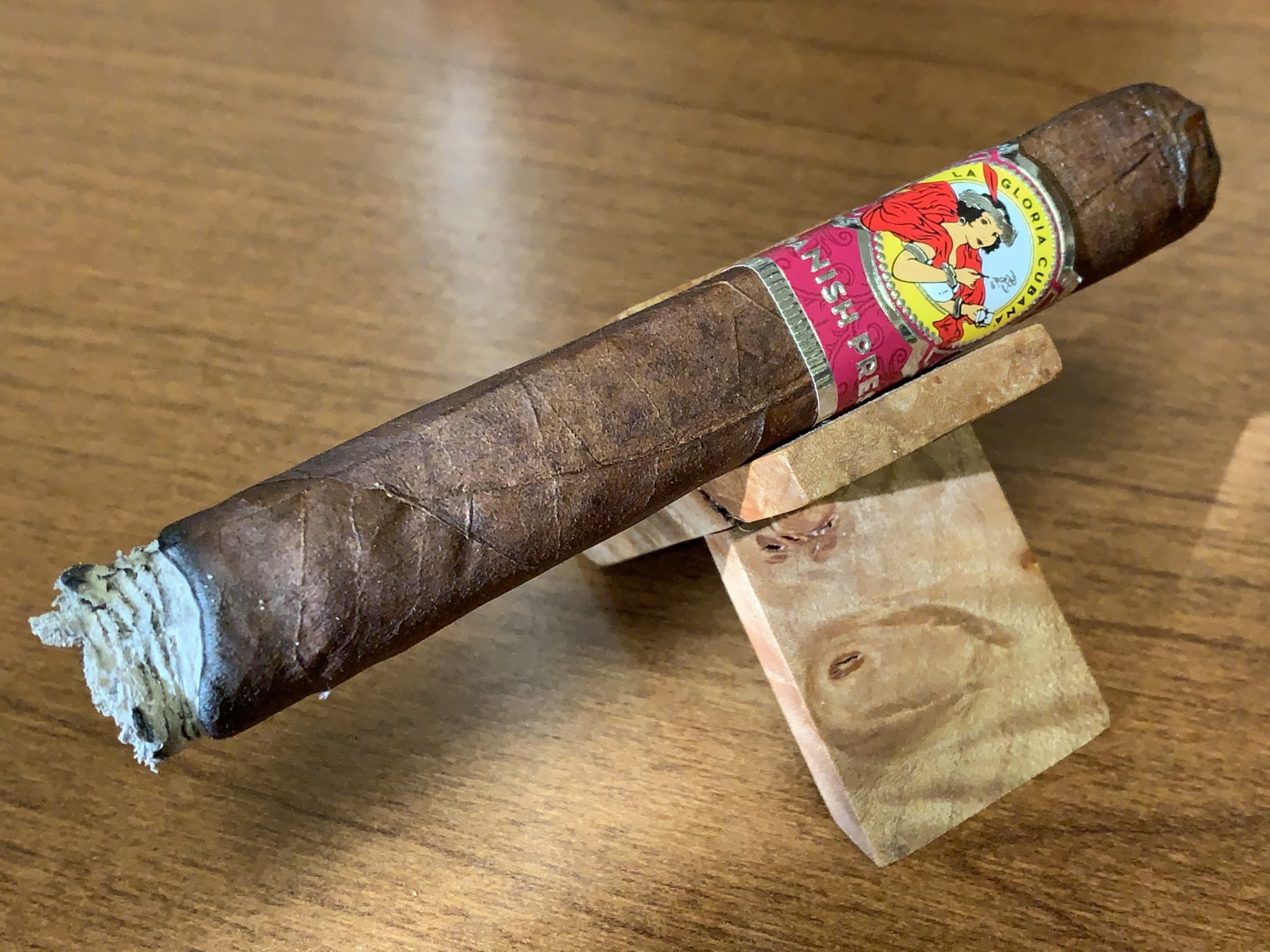 Pre-light flavors are fruity with a hint of raisins and some lingering peppers. After lighting, there are notes of espresso and spices. It reminds me at times of the smoky taste of tobaccos you’d find in something like Kentucky Fire Cured. From there, flavors evolve to include citrus via a dash of orange peel, along with butter, coffee, and smooth dark cocoa.

If I had to sum Spanish Press up in a word, it would be refined. Even the earthiness I found at the halfway mark was sweeter than most earthy tones I’ve tasted.

This isn’t a cigar you want to smoke in the car, or in a crowded, noisy lounge. This blend demands your attention and rewards you for providing it. LGC set a new bar in the early 90s, and if this cigar is any gauge of things to come, I think they’ll be doing it again.

As of review time, the Spanish Press is La Gloria’s newest addition to the line – but I’d actually call this LGC a “throwback” smoke (you’ll see what I mean in the video).

This Spanish Press Robusto offers generous amounts of thick smoke from the get-go, and settles in with your first tastes of cinnamon and pepper – along with an initial hint of the Jalapa wrapper’s sweetness. It’s heavy and bitey, like a piece of semi-sweet chocolate. 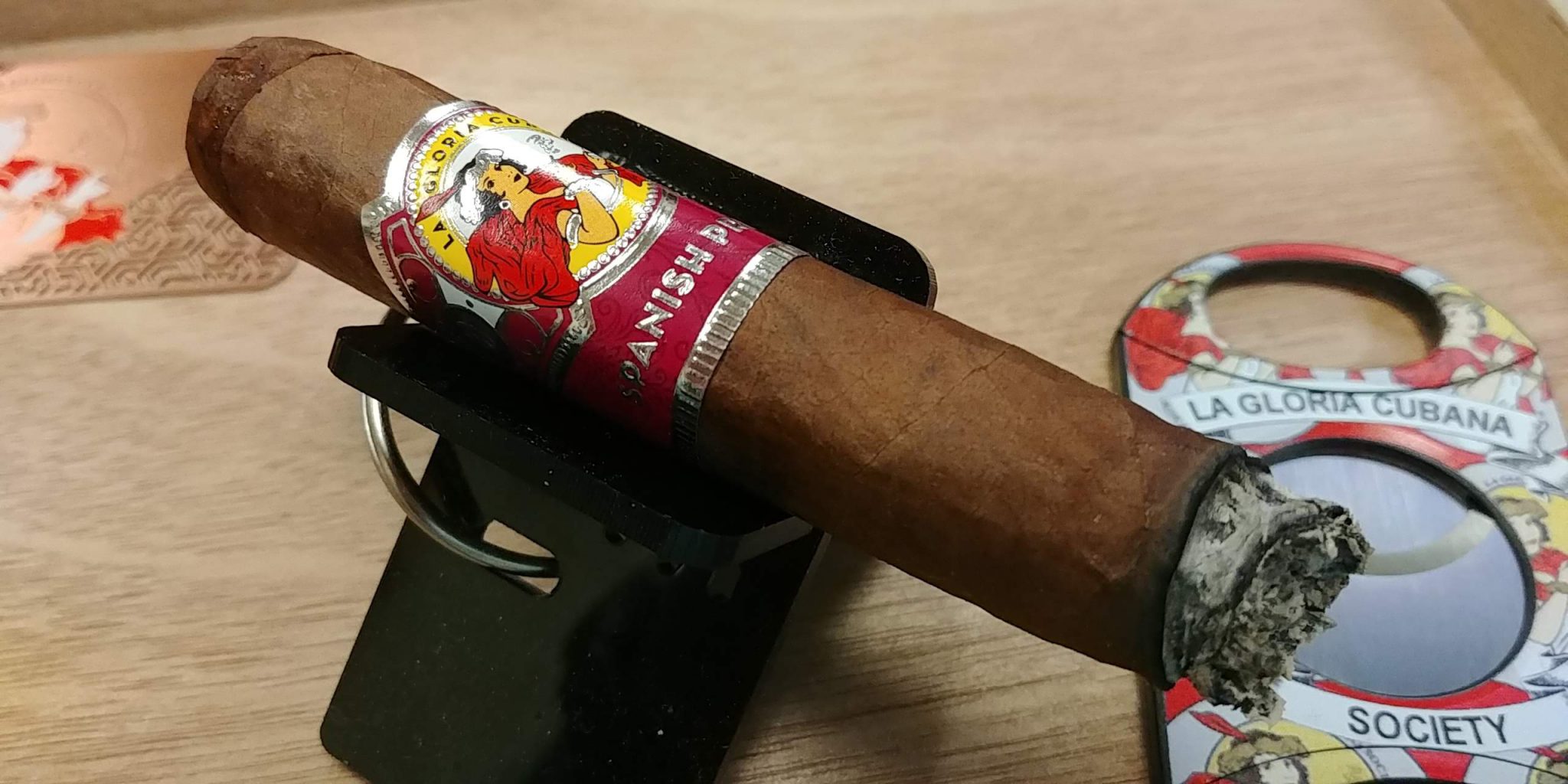 But that’s the start of something interesting: that dark taste starts to sweeten up verrrrry slowly, transitioning from that dark taste to a flavor closer to baker’s chocolate…then another inch on, and the taste is more like a Special Dark candy bar. Another 20 minutes, and that sweetness has become lighter and creamier, like cocoa – then even sweeter, like that sensation when you pop open a can of Nestle’s Quik. In all, it’s about an hour-long evolution that gets more and more appetizing throughout the burn.

The Spanish Press is supposedly a “Nicaraguan-forward” (their words, not mine) cigar. Why I believe it: there’s a constant low hum of cedar in the background, along with the noticeable taste of coffee – complete with a hint of citrus zest that smacks the taste buds like the lemon peel in your espresso. And all that good Nicaraguan-ness lingers nicely on the finish.

Light in the hand but packed firm, the Spanish Press offers a decent amount of burn time – and even with a wavy char line (fixed twice via touchup), this La Gloria gives an impressively balanced display of spice (cinnamon, coffee, pepper), wood and sweet.

An excellent change of pace from the bigger and brawnier La Glorias you might have become acquainted with (hello, Serie R and Serie N) – and with more depth of flavor than strength in the mix, it’s a choice LGC you won’t need to wait to smoke til after dinner.

Reading Time: < 1 minute #nowsmoking Asylum Medulla Oblongata Maduro Toro: “a dense, medium-plus smoke brimming with…”, well, LOTS of flavors. Click now for the tasting notes, and everything else you need to know about this cigar in under 60 seconds…