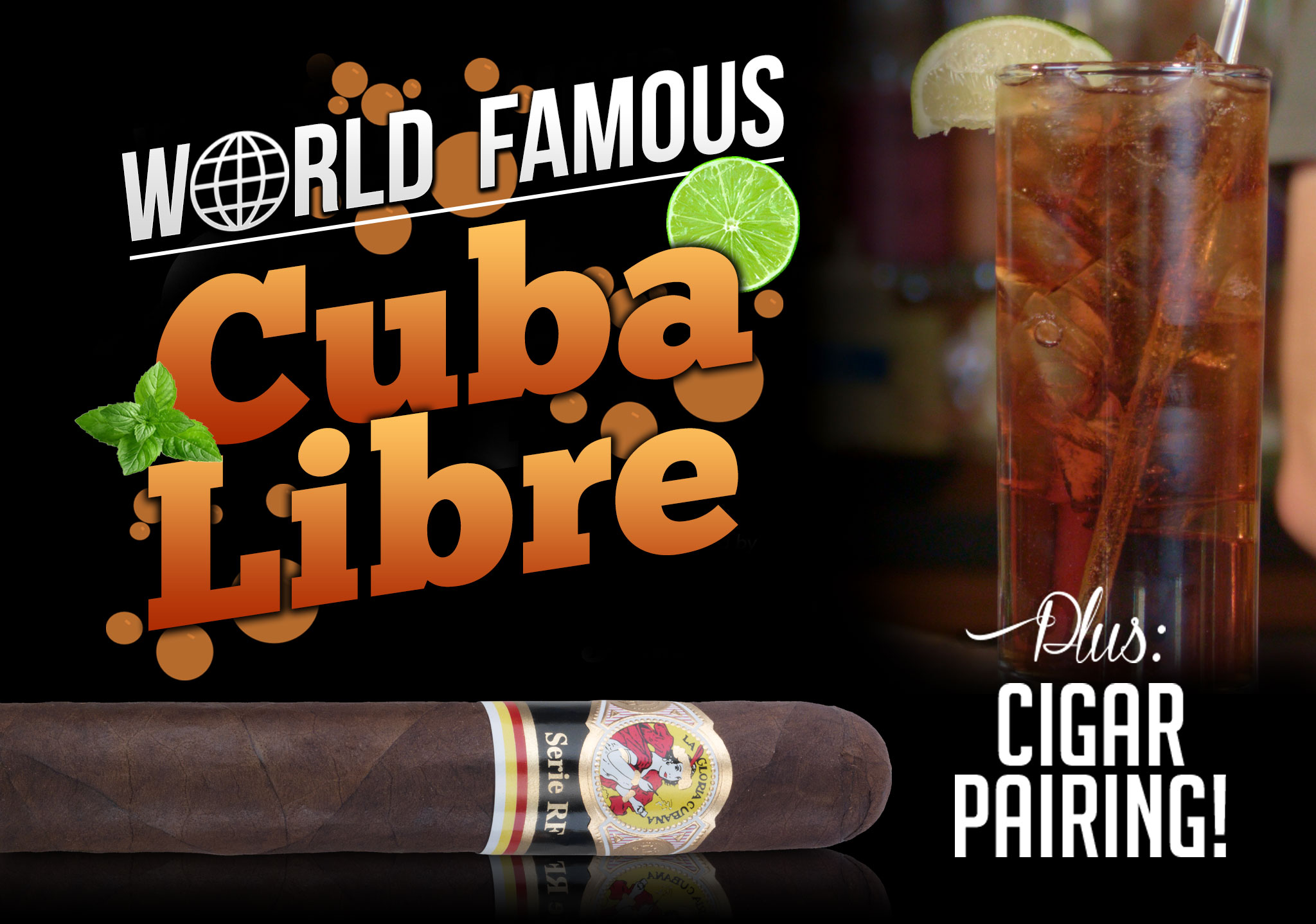 How to Make a Cuba Libre + Cigar Pairing Recommendation

How to Make a Cuba Libre – Plus Recommended Cigar Pairing

It’s not hard to learn how to make a Cuba Libre cocktail, but when it comes to mixing up this perennial wedding reception go-to, there’s more to it than just pouring Coke and rum in a tall glass and calling it done. And if you’re pairing this drink with a cigar, just any old smoke won’t do – that’s why we’re digging into the La Gloria Cubana stash for today’s tangy combo.

To savor the Cuba Libre cocktail, we must appreciate some history behind it. Havana was one of the few tropical towns to import ice in the late 1800s, shipping it down from colder climates to satisfy the townsfolks’ thirst for icy drinks (think mojitos). Cuba’s light rums had long been the ingredient of choice for cocktails; and by the early 1900s, Coca-Cola quickly found its way behind the bar as a mixer. Rum and Coke quickly spread from Cuba to the southern United States in the early 20th century. It boomed during World War II, when American servicemen stationed in the British West Indies developed a taste for Caribbean rum; the US government was shipping our boys Coca Cola by the planeload. The Cuba Libre/Rum and Coke’s stock rose even further when the Andrews Sisters sang “Rum and Coca-Cola” in 1945. Happy hour would never be the same.

But some delicious irony behind how to make a Cuba Libre today, in its traditional form…it’s very difficult for Cuban rum to find its way here to America; same goes for finding real Coke in Cuba, apparently (they substitute a local brand of cola). So a true “Cuba Libre” isn’t really Libre at all. And as it turns out, the Cuba Libre may not have even originated in Cuba…

Origin of the Cuba Libre Cocktail

There’s a legend that dates the Cuba Libre back to the Spanish-American War, and when the Cubans were fighting for their independence from Spain. “A guy walks into a bar…” and orders rum with Coca-Cola over ice, garnished with lime. Some versions of the tale identify him as a Captain in the American military; all versions claim that it was a paradigm-shifting moment in drinking, with the Cuba Libre becoming an instant sensation – and everyone toasting, “¡Por Cuba Libre!” to celebrate the Cubans’ victory. Great story…but it’s likely just that – a crafty marketing tale, cooked up by someone who was repping Bacardi, and hard. It just so happens that Bacardi rum was supposedly at the heart of the mix, and skeptics point to the fact that it’s unlikely that Coca Cola was even available in Cuba at the time. Another (more believable) version puts the inception of the Cuba Libre at 1902, when Coca Cola syrup was available outside the US – and the American Bar in Havana mixed them up for the patrons as part of an anniversary celebration for Cuban independence.

That being said, there is an actual Cuba Libre drink from the late 1800’s – but it consisted of a mix of water and molasses or brown sugar.

How is a Cuba Libre different than a Rum and Coke?

Because you’re probably thinking, “any idiot can make a rum and Coke…what makes a Cuba Libre cocktail different?”

It’s true: if you order a Rum & Coke at a bar, it’s very likely you won’t get a slice of lime. You would have asked for Rum-and-Coke-and-Lime, and no one does that. So if you want to make a Cuba Libre with some legitimacy, add the lime. Go for extra credit (and extra tropical flavor) by squeezing the lime, or even muddling it in the bottom of the glass before you add the ice. But by just hanging a lime wedge on the rim of the glass, you’ll be passing a bit of juice and a hint of the lime’s bright natural oils into the drink. Some nice tangy aroma, too.

Substitute an añejo rum for the light rum, and the Cuba Libre becomes a Cubata.

If you’re ready to learn how to make a Cuba Libre drink the Leaf Cigar Bar way, watch as we run through the short and easy steps in this video. Like most top notch iterations of this drink, the best Cuba Libre is made with Bacardi’s Superior white rum; after taste-testing for quality assurance, we have determined that the rum and Coke ratio should be about 1:3 – or one part rum for every three parts cola. And to make it extra interesting, we’ve paired this rum treat with one of the more Cubanesque smokes in the LGC stable: La Gloria Cubana Serie RF.

Here’s how it all comes together:

How to make a Cuba Libre drink…even though it’s a cocktail (and would call for a Collins glass), it’s more common to make a Cuba Libre as a highball. Add the scoop of ice; pour the Bacardi in, and top with cola. And remember, if you leave out the garnish, you’ve done a great job of making the best rum and Coke; don’t skip out on the lime.

If you’re familiar with the heavier-duty La Gloria Cubana cigars, the Serie RF will hit you in your sweet spot: the blend is a mix of straightforward Dominican and Nicaraguan long fillers, coupled with high-priming (ligero) tobaccos from both countries, resulting in a well-packed smoke that’s nearly-full in body and strength. A blending exercise inspired by the Golden ratio, it’s loaded with dark, peppery flavors. The beautiful Ecuador Habano wrapper exhibits a nice sheen, and adds some extra bite.

Being front-loaded with all that ligero and having 3 vitolas rated into the 90s, the opening notes of the Serie RF speak volumes.

We’ve said in the past that this LGC “begs to be matched with a refined Scotch or bourbon.” But this pairing works because of balance: it’s how the ligeros’ spices amplify the taste of the rum, and both dovetail with the sweetness in the Coke. The RF’s complexity hits its stride at the halfway point; the flavors are well rounded, but still coat the senses with a spicy twinge throughout. You’ll enjoy the nice toasty aroma, too.

So there you have it: a Cuban heritage combo that’s full of friendly flavor, and a sure-fire winner to help spice up cocktail hour at that next wedding reception you’re dragged to – or if you’re keeping it close to home, a good reason to fire up this La Gloria and make a Cuba Libre on the patio. Cheers!

The Cuba libre is one of those refreshing drinks preferably on a summer nite. Am looking forward to pairing the LGC serie RF, but am not waiting for summer! 😁

Reading Time: 6 minutes The follow-up to the hit Project 40 series by Alec Bradley, Project 40 Maduro, has landed on our desks. Come check out our video review that’ll break things down so that you’ll know whether this cigar is right for you!