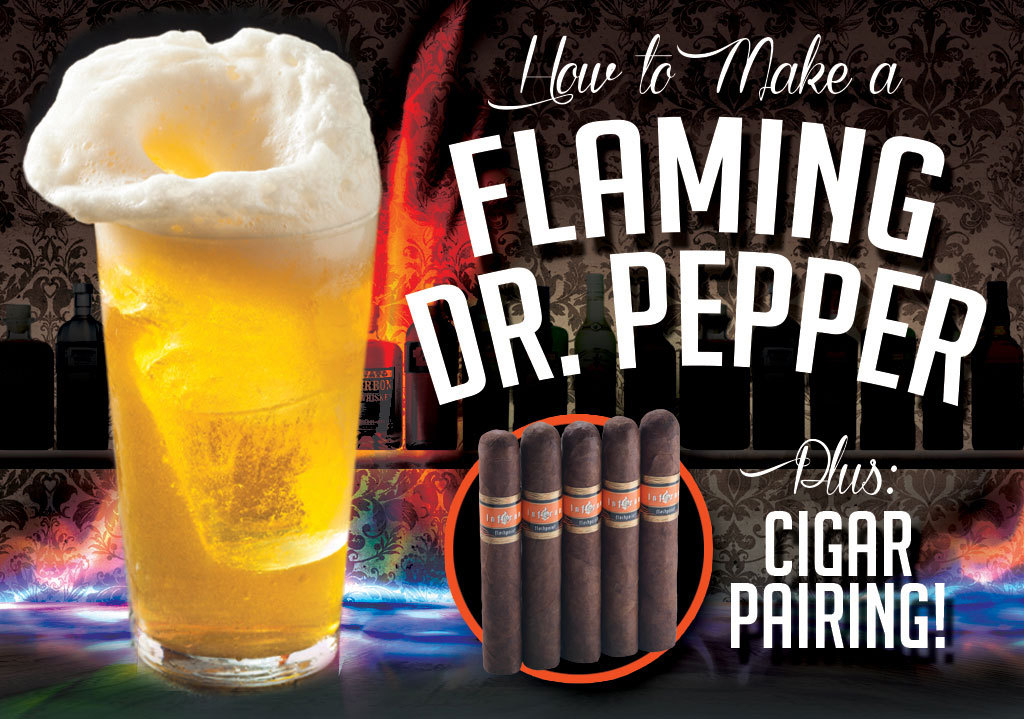 How to Make a Flaming Dr. Pepper Shot – Plus Our Recommended Cigar Pairing

My, my…Christmas party time already. If you’re expecting to find yourself stuck behind the bar for the next holiday get together, why not make things interesting? See, we’ve really been getting into pairing cigars with drinks lately; so today, we have a quick video on how to make a Flaming Dr. Pepper shot, along with the recipe – plus our pick for the perfect cigar pairing for this beer-rum combination. You’ll be the hit of the party with this epic cocktail…we guarantee it.

The Flaming Dr. Pepper drink is a unique and satisfying cocktail that’s actually pretty easy to make. We’re going to tell you multiple times throughout this how-to: because fire is involved, be extremely careful when you drop the Flaming Dr. Pepper shot into your beer.

Some history…Legend has it that the Flaming Dr. Pepper was developed in a New Orleans bar to soothe fans after a Saints loss; there’s someone in Texas who also claims to have done it first. While we let them fight it out, let’s take a look at a Flaming Dr. Pepper recipe from Chad, our in-house expert at Leaf Cigar Bar in Easton, PA.

With the craft movement, there are (roughly) 8.5 billion beer choices out there now…but anything exotic is basically a hat on a hat: unnecessary, and might even end up taking away from the intended consequence, a shot that tastes like Dr. Pepper. The best beer is something simple, and that goes down easy: a light beer.

So if you’re ready to learn how to make a Flaming Dr. Pepper, here’s your shopping list:

Chad also tells us no specific brands are necessary for this beer-cocktail – but these work well for him. Watch him do it:

Pour the amaretto into a shot glass; add the Cruzan 151 to it, slowly. The thing to remember is that the rum needs to be layered on top of the Amaretto – that’s the fuel source for the flame. Now, light it – preferably with one of those long candle/grill lighter type things. Use a little care here, since the flame is hard to see under bright lights.

Note: this is a great time to use your flaming shot to light your Inferno Flashpoint.

If you’re drinking with pals, time to make the magic happen: drop your shot glasses (still on fire) into your beers; the beer will extinguish the flame, and give you a chance to down this bomb shot in one fell swoop.

Now take a long, slow and satisfying puff on that cigar.

Done right, the rum/amaretto/beer combo should leave the fizzy-sweet taste of Dr. Pepper on your palate.

Since we have a hefty rum involved, I figure it’s best to go with something hearty to smoke, as well – and that’s where the Inferno Flashpoint comes in. The core blend consists of Nicaraguan ligero long fillers, balanced by the addition of sweeter, Jalapa-grown leaves; these complement both the rum’s intensity and the Amaretto’s almond sweetness (at least, however much of it you can detect through the beer). It’s assembled and wrapped in a rustic-but-nice Sumatra leaf.

The Inferno Flashpoint gets off to a peppery, medium start – but strength and flavors both develop into something that leans more to the full side, while not being overly complex. The Robusto is an enjoyable one hour-plus smoke, which makes this a bit of an oddball, pairing a cigar with a shot. Yes, the Flaming Dr. Pepper is meant to be chugged; but because it has such a long finish on the taste buds, you can enjoy a good chunk of this cigar until the taste goes away…or your pals talk you into another round.

Fire on the bar top is sure to catch the eye – and we’re betting that this concoction that tastes like soda, but has none in it, will go great with a seasonal smoke like the Inferno Flashpoint. Just please, be careful if you follow this Flaming Dr. Pepper how-to – no one asks for 2nd degree burns for Christmas. Cheers!

Reading Time: 14 minutes Our Top 25 Cigars of 2018 are announced: these are the year’s best smokes, each a new-for 2018 release that more than impressed us…they left a mark. If you’re feeling adventurous for new cigars to try, here’s a quick n’ tidy recap of the selections we think are totally worth your time.