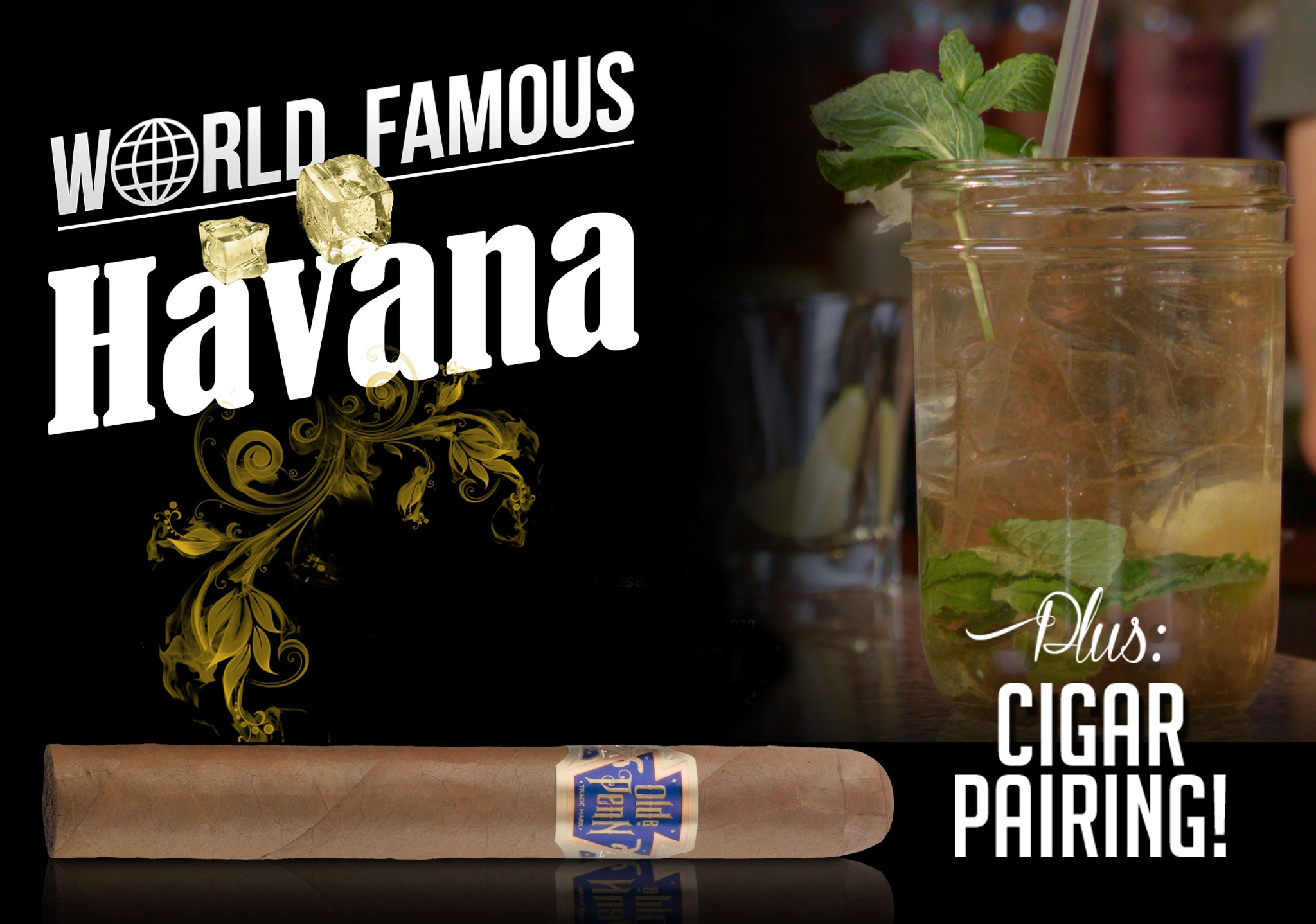 How to Make a Havana Cocktail – Plus Recommended Cigar Pairing

Your cigar horoscope: we see a hot Summer day. Feet up. A mellow cigar. An icy Cuban cocktail.

If those are signs of times to come, things are definitely looking up.

While a trip to Cuba remains high on so many cigar lovers’ to-do lists, there are still so many hoops to jump through to enjoy a Havana drink in its namesake city…that’s why we’re bringing this Leaf Cigar Bar version of how to make a Havana to you – along with a smooth n’ easy-smoking Drew Estate blend to help you wash it all down. We’re also going to explore a little about the secret boutique ingredient that gives this Havana drink some extra oomph, and talk a bit about why it’s damn near impossible to get your hands on a sizeable stash of Havana Club rum.

This Havana Club recipe is a bit off the beaten path here…for one thing, we can’t use Havana Club rum. Yes, you can bring a few bottles back from your cruise stop in Cuba, but for us to be serving this OG Cuban rum is still verboten. The other thing that’s a bit different in this Havana cocktail is the vanilla vodka, making our version of this Havana Club cocktail more of a Moscow Mule-meets-Mojito – but still satisfies as a refreshing summer drink with both a Caribbean flair and a piratey edge.

Jose Arechabala S.A. created Havana Club rum in 1934, and this lush Cuban liquor flowed freely until the company was “nationalized” by Castro in 1960. Just like their Cuban cigar making counterparts, the Arechabala family fled the regime – and passed their rum recipe to Bacardi, who began producing their version of Havana Club in Puerto Rico in 1994. But the original Havana Club rum is one for the bucket list: a 7-year aged (añejo) Cuban rum, it’s known for having a rich and sophisticated flavor.

What sets this version of the Havana cocktail apart is the Faber Vanilla Vodka, a concoction distilled in nearby Bucks County, PA. We figured since we already went off the reservation with our Havana recipe, this was the perfect time to incorporate a local spirit renowned for its easy-drinking qualities: The vanilla infusion is pretty rich, and the taste offers a touch of cream soda. It’s also lightly gently sweetened with genuine cane sugar, so the finish is clean – meaning it doesn’t leave a syrupy aftertaste on the taste buds like some other infused liquors might.

Here’s how Chad pulls it all together behind the bar:

How to make a Havana Club drink…start by squeezing in the lime quarters, then press the mint leaves and drop them in the glass. Add the Faber Vanilla Vodka, then the rum. Scoop in a generous helping of ice, then top the glass up with the ginger beer for a refreshing island sensation.

If you’re going to learn how to make a Havana – a nice, slow-sipping drink – it helps to have match it with a nice, slow-smoking cigar. Olde Penn cigars by Drew Estate are a tribute of sorts to Pennsylvania’s long tobacco history. PA-grown crops helped to pay our young nation’s war debts, and at the height of the Golden Era of cigars – around the turn of the 20th century – there were approximately 4,600 cigar factories…that’s more than any other state in the Union, and went a long way in satisfying America’s appetite for a good smoke. Olde Penn’s flavors check in around the medium body mark, but it’s very easy-going – mellow-plus in strength, it’s very palatable to new cigar smokers as well.

For Olde Penn, Drew Estate incorporates Nicaraguan long fillers rolled in silky-smooth Ecuadorian Connecticut wrappers. The wrapper choice helps these smoke with a little more gusto than your typical Connecticut Shade, and a little more creamy – which goes well with the sweetness from the vanilla. The Nicaraguan core makes for those leathery, aged wood sensations that go nicely with darker rums and the ginger beer; the occasional twinge of pepper running quietly beneath the surface is a treat, too.

So if you’re getting ready for smoking season, and you’re looking for a smoke-and-drink combo to call your own this summer – give this mellow-smoking Connecticut from Drew Estate a try, along taking a shot at Leaf’s way of how to make a Havana cocktail recipe…your taste buds will be rewarded. Cheers!

But did you die?