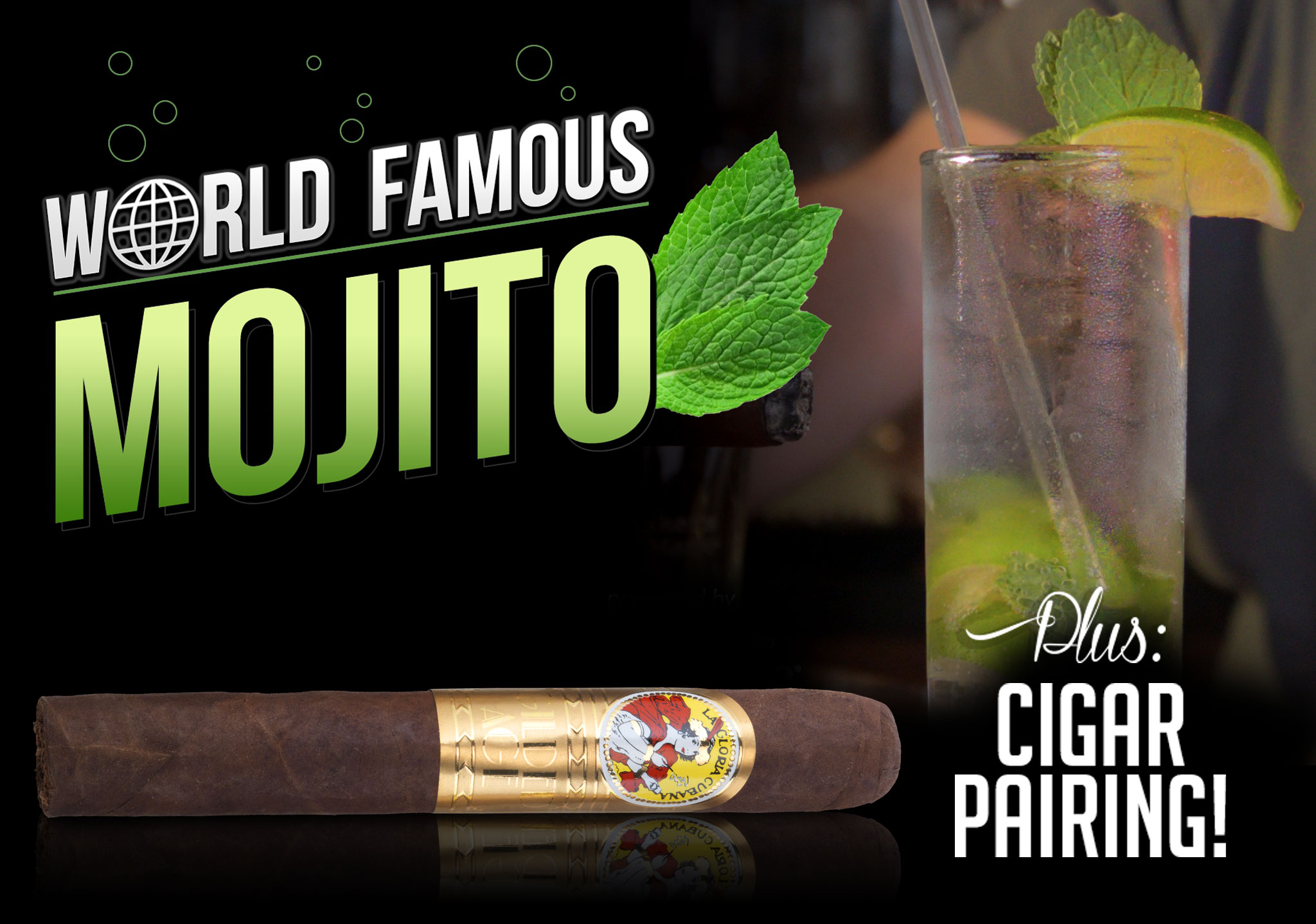 How to Make a Mojito + Cigar Pairing Recommendation

How to Make a Mojito – Plus Recommended Cigar Pairing

Next to their cigars, it has been called “Cuba’s Finest Export”: it is the classic Mojito, a rum-soaked slice of heaven that is made to both satisfy and refresh on any given summer day.

There was a time when this cocktail was consumed for medicinal purposes, as the Mojito recipe was believed to have healing properties. We cannot confirm or deny those claims; but we can agree that the classic Mojito is a very versatile drink, pairing with just about anything…and when paired with a cigar, the experience is pretty much as Cuban as it gets. So, as we explore the history of the original Mojito, we’ll add a cigar from the La Gloria Cubana lineup that will make a delicious pairing for your afternoon smoke-and-drink session.

We’re also going to take a little shortcut in this Make a Mojito How-To that will save you some big prep time, leaving you more hours for enjoying Cuba’s most iconic cocktail – as opposed to making them.

What is in a Mojito?

If you’re learning to make a Mojito, use this pro advice from the founder of NYC’s Havana Central: “Mojitos are a combination of sweetness, refreshing citrus, and mint flavors that emerged as a perfect complement to the hot, sticky weather of the Caribbean.” That’s the kind of drink we’re shooting for here.

What makes the Mojito drink stand out are the fresh ingredients: limes and mint (with spearmint preferred). Club soda and simple syrup dress up the Bacardi with a sweet, refreshing sensation, a throwback to the days when rum wasn’t the refined spirit we drink today…most early rums were cheap, gritty and pretty rough around the edges – so the more ingredients to sweeten things up in the old-timey Mojito recipe, the better.

If you want a twist on the original Mojito, try the Dirty Mojito (spiced rum and brown sugar syrup); the Mexican Mojito subs in tequila for the rum, and the Mojito Royal replaces the club soda with champagne.

History of the Mojito

Like all legendary cocktails, the origin of the classic Mojito story is as foggy as you might be after downing three or four of them. Version 1 has the early Mojito drink named El Draque in honor of Sir Francis Drake, English naval captain/explorer/conqueror/pirate (it’s complicated, and his legacy depends on who you ask). Once he wrestled Cartagena de Indias from the Spanish, he sailed towards Cuba – but his crew began to show signs of dysentery and scurvy. A stop in Havana yielded a concoction of crude cane rum, lime, sugarcane juice, and mint; and thus, the Mojito was born. Probably not the best remedy for scurvy – but what the hell, why not.

Version 2 gives credit for the Mojito recipe to the African slaves who worked Cuba’s sugar cane fields. Theirs was a similar mix of “Aguardiente de Caña” (translated as “firewater of the sugar cane,” the same as Drake’s crude rum), along with Guarapo (sugarcane juice) – but no limes. Their word “Mojo” is what supposedly contributed to the name of the drink, but even that gets argued about.

Then Prohibition happened…and then, Ernest Hemingway.

As Havana became America’s playground in the Twenties, Mojitos moved to the city and got a makeover with soda water and ice, “the glorious offspring of the Mint Julep and the classic Daiquiri.” Mojitos would become a household name in 1939, when Papa moved to Havana and supposedly declared “Mi mojito en La Bodeguita, mi daiquirí en El Floridita.” It means, “My Mojito in La Bodeguita, my daiquiri in El Floridita”… and according to legend, he actually wrote this on the wall at La Bodeguita del Medio in Old Havana.

But no matter who invented the original Mojito, gave it the name, or made it a staple among rum drinks – the best Mojito is a simple and refreshing companion to the La Gloria, and one of the most popular cocktails on the planet. So let’s make a Mojito, the Leaf Cigar Bar way – including our Mojito ingredients, along with that time and energy-saving shortcut…

Meet Chad…he’s showing us how to make a Mojito:

Now we know what you’re thinking: “What the hell is this? He didn’t muddle anything!” Making the classic Mojito can still be accomplished without muddling the ingredients, and here are three reasons why:

Here are the steps to make a Mojito, the quick and easy way…it’s a highball – so squeeze the limes and drop them in a tall glass; give the mint leaves a squeeze, and drop them in as well. Drizzle in a ¼ ounce of simple syrup, followed by an ounce (that’s an approximate, you’re going to eyeball this one) of Bacardi. Fill the glass to the rim with ice, then top up with club soda and garnish with more of the green stuff. No mess, no fuss, no problem – just serve, drink and repeat.

If you’re going to put your best Mojito foot forward and give our recipe a try, then it’s certainly worth your time pairing it with the brand that helped give rise to the Cigar Boom era, and a true Cuban heritage brand: La Gloria Cubana. With a stable of premium cigar legends to their credit, we’ve selected La Gloria Cubana Gilded Age to pair with our Mojito recipe: a full-bodied, medium-strength Honduran smoke that’s packed with a vigorous blend of Nicaraguan Viso and Ligero, a Honduran binder and a toothy Sumatra wrapper grown in Ecuador. A classic profile, for a classic drink.

This La Gloria and the Mojito don’t just pair up to deliver Cubanesque overload; they match nicely because they dovetail together in taste. Example: when we tasted the Gilded Age in our La Gloria Cigar Guide, we found a savory combo of earth, wood and spice – similar to wine tannins – all of which help to amplify the rum and fill the space left wide open by the sweeter Mojito ingredients. There’s also a very nice citrus component to the smoke at the outset, a subtle tangy sensation that puts the needle in the groove and makes a great tasting combination from the start.

The flavor transitions are subtle, yet the La Gloria Gilded Age provides enough body and strength to satisfy, without bumping you off your barstool.

So if you’re in the market for an authentic taste of Havana, but a trip to the ISOM (Island South of Miami) isn’t in the cards – watch and learn to make a Mojito, and pair it with this tasty La Gloria selection…it probably won’t prevent scurvy, but your taste buds – and your friends – will thank you just the same. Cheers!