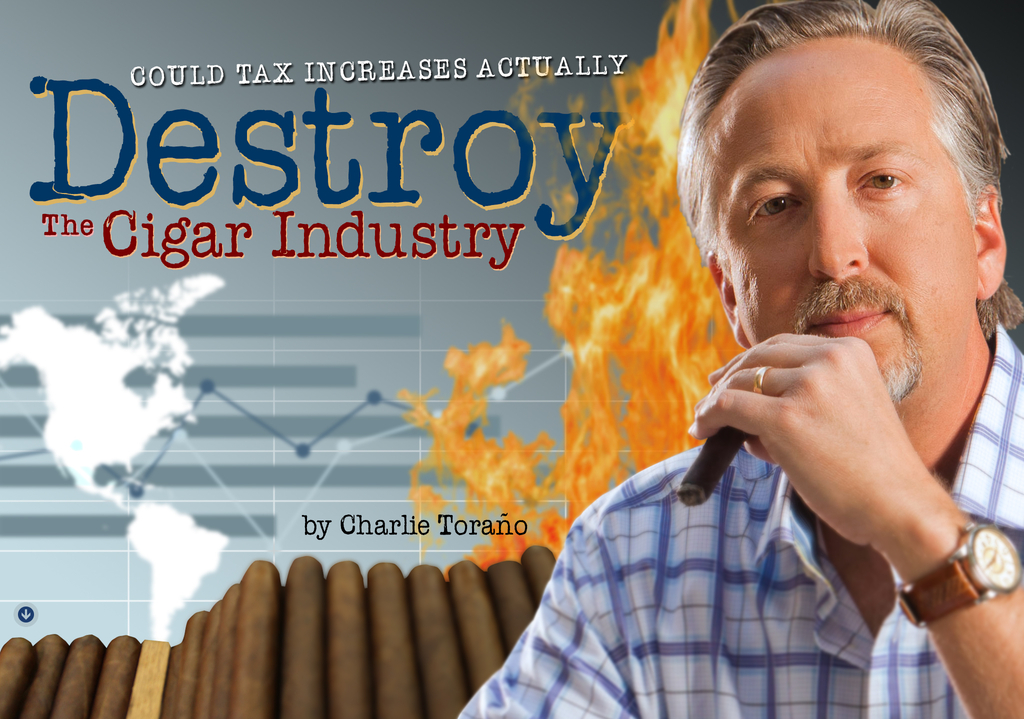 On October 18, 2007, my wife and two kids were enjoying a meal around the kitchen table like it was any other Thursday. I, on the other hand, was glued to CSPAN-LIVE counting votes and praying that the handmade cigar industry would survive. The moment was surreal: whether it knew it or not, my federal government was threatening to destroy my business, an industry rooted in tradition and passion, and the simple joy of smoking a great cigar.

The measure being voted on was an attempted override of the President's veto of a bill called SCHIP (States Children Health Insurance Program), a state-based health insurance program for children of families who earn too much to qualify for Medicaid.

The proposed expansion of this federal program was funded, in part, by a draconian increase on the excise tax of handmade cigars. The tax would increase from the then-current maximum of $0.05 per cigar to an inconceivably astronomical maximum of $10.00 per cigar. Yes, you read that correctly-that’s a 20,000% increase! If the veto were overridden, the handmade cigar industry would likely collapse.

Estimates by industry experts projected that production would be cut by at least 50%, and that many small- to medium-sized manufacturers and distributors would likely go out of business. In addition, retail tobacconists across the country would likely close in large numbers.

By the end of the family meal, the veto override failed by just 15 votes. Out of almost 435 votes, we “won” the vote by just 15. While the handmade cigar industry survived this Pearl Harbor-style attack by our own federal government, the government has been waging war on us ever since.

The cigar industry was accustomed to fighting legislative battles at the state and municipal level. We were not remotely prepared for the onslaught from the federal government. The SCHIP bill was eventually pushed back until the Obama administration took over in 2009. Just a few weeks after inauguration of the President, SCHIP became law with a cap of $0.41 per cigar. While it was much more favorable than the original $10.00 cap, the cigar industry nevertheless sustained a 700% tax increase. To put this in perspective, under the previous regime, if a distributor had 100,000 cigars in inventory, it would have to pay the federal government a $5,000 floor tax ($0.05 per cigar) to store the cigars in its warehouse. Under the new SCHIP, the distributor now had to pay the federal government $41,000 ($0.41 per cigar) to store those same cigars. For those of us making a living in the industry, SCHIP changed everything.

While it is not my intention to get political in this article, it is only fair to say that I am from the conservative end of the spectrum. However, as we in the cigar industry became more engaged in the federal lobbying effort, it became clear that we needed friends from both sides of the aisle. As some of my colleagues can attest, warming up to this concept was no easy feat for me.

One such bipartisan outreach came when a group of conservative Cuban-Americans met with Representative Charlie Rangel (D), the then-Chairman of the powerful House Ways & Means Committee, at a home in Coral Gables, Florida. Offering him our support so that he could assist us with our federal tax challenges was completely alien to me, and Representative Rangel was quite blunt. He told us that our taxes would be going up no matter what we did. If we got organized as an industry, he said, we may be able to keep the tax at a livable rate.

In our political culture today, “lobbying” or “lobbyists” are routinely painted as the primary source of all evil in Washington. Time and again we hear politicians of both parties deride lobbyists or “special interests.” Newsflash: Representatives and Senators need lobbyists to educate them on the impact of their decisions. I will never forget the initial reaction of various politicians when the $10.00 SCHIP tax was first proposed. The politicians thought that only rich people smoked handmade cigars. They literally said that cigar smokers could afford to pay $10.00 extra for a handmade cigar. They were beyond ignorant about our industry. Their portrayal of cigar smokers was an old and tired stereotype. It became abundantly clear that a massive educational process (a/k/a lobbying) would be needed at the federal level.

When the SCHIP dust settled in early 2009, it felt like the handmade cigar industry had narrowly escaped its demise. However, shame on us for not being ready; just four years earlier, at the end of 2004, the federal government had telegraphed its views on cigars and its willingness to tax us unfairly with the “Tobacco Quota Buyout.”

Since the days of FDR's New Deal, the federal government had enforced a tobacco production quota in the United States in order to raise the price of tobacco above the market level. The government’s arbitrary “support price” was maintained by allocating production quotas among individual farms based proportionately on their history of producing tobacco. In other words, they artificially limited the supply by increasing the price.

Fast forward to the 21st century and the sales of U.S.-grown tobacco had declined sharply. Thus, a decision was made to end the quota system in 2005. In so doing, the government decided to compensate the quota holders to the tune of $10 billion over ten years. Guess where the money comes from? Answer: Assessments (a/k/a taxes) on manufacturers and importers of tobacco products marketed in the U.S., including handmade cigars. As if that were not bad enough, here's the real kicker: none of us in the handmade cigar business ever used or benefited from the tobacco grown in the United States!

Both SCHIP and the Tobacco Quota Buyout included federal taxes on handmade premium cigars and we had absolutely nothing to do with the issues being addressed in the legislation. Children's health is not affected by handmade cigars, and children don't smoke handmade cigars. When is the last time you caught your teenager or young child smoking a stogie? It doesn't happen. Regardless of the anti-tobacco propaganda, we in the handmade cigar business do not target or appeal to children, nor do we tolerate any underage smoking.

SCHIP is up for renewal at the end of 2013. Thus, we are gearing up for another existential tax fight in 2013. The Tobacco Quota Buyout is consistently allocating a larger share of the yearly payments to the cigar category which in turn raises our taxes. On a yearly basis, we are fighting massive tobacco tax increases at the state level. New York is now at 75% of the wholesale price, Minnesota is at 70%, and Colorado is at 40%, just to name a few. For those of us who enjoy a good cigar, Taxmaggedon (to borrow a phrase) is real and can crush our industry.

I've had the pleasure of visiting and doing business in several countries outside the U.S. When you travel to places like Canada, the U.K., and Australia, you catch a glimpse of what the cigar industry could look like in this country. Each of those countries has exorbitant tax rates on cigars. In Canada, for instance, one of our cigars that sells for $7.00 in Florida (a non-tobacco tax State) will sell anywhere from $15-$18.00 in Canada. Cigars in these high-tax countries are enjoyed only by the very well-off, and even they are particular about how often they can smoke such a high-priced product.

Taxes are not nearly the only threat to our industry. We have the federal regulatory threat of the FDA as well as myriad state and municipal smoking bans throughout the country. However, taxing handmade cigars at a punitive level has the potential to destroy our industry overnight. Four years ago, 15 votes was the difference between life and death for the cigar industry. How long can we survive on this razor's edge?

I'm lucky enough to be the fourth generation of my family in the handmade cigar industry. Today, I have a fourteen year old son and an eleven year old daughter who would like to work with their father in this industry that I love. I'm sure many of you look forward to the day when your son or daughter becomes an adult and can share a special moment with you enjoying a good cigar. To make sure this happens, we have to fight for what we are passionate about.

I hope that all cigar smokers will unite with us in the industry and take the fight wherever it's needed. In the meantime, Make Time to Burn.

Reading Time: 19 minutes When it comes to super-premiums, Davidoff cigars are without peer. See this Tasting Guide for reviews of 11 cigars from Davidoff’s prolific assortment of line extensions, including their Winston Churchill selections – and find the Davidoff cigar that’s right for you.

The “Why of Buy” – a Problem for Problem Solvers