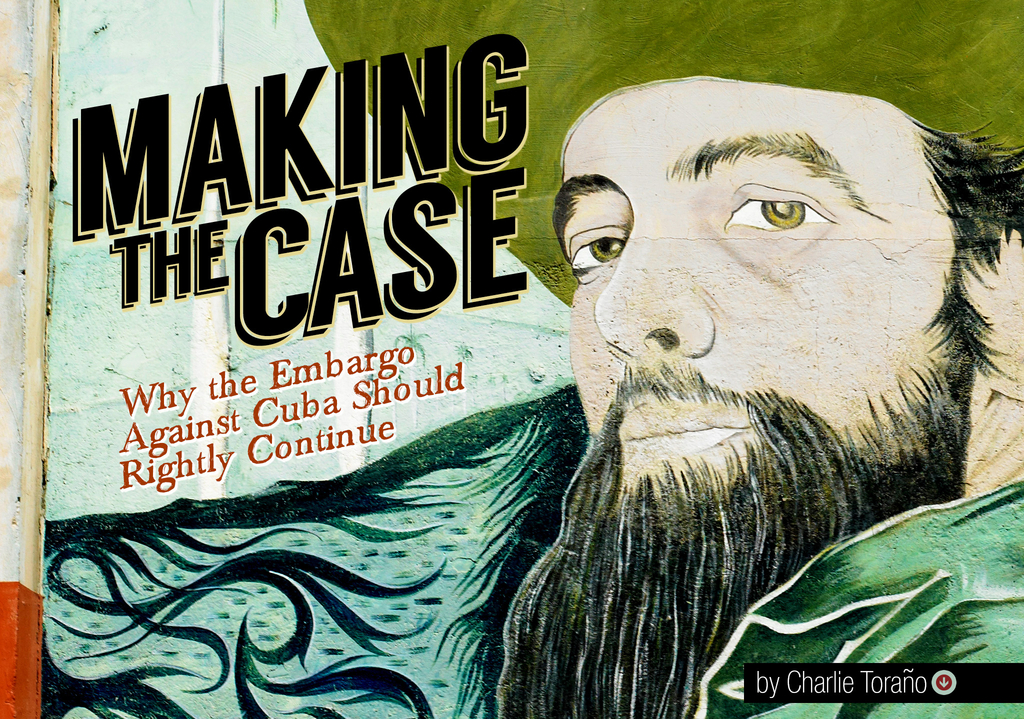 Making the Case – Why the Embargo Against Cuba Should Rightly Continue

I want you to assume that tomorrow I'm going to take everything you own and make it mine. I'm going to take your house and all of your money. If I approve of what you do for a living, you will continue to work, but at a barely subsistence level. If I don't approve of your work, even if you've spent a lifetime building your dream, I'm going to destroy it.

If you have children, I have some plans for their indoctrination for which you will have absolutely no say. If I don't approve of your opinions, I'm going to put you in jail, after which I'm either going to torture you or kill you. I will control all sources of media and information and the only travel that will be permitted outside the country will be to places that I send you. Sorry, I forgot to mention that throughout this process, you will be happy to know that I'm going to give you free medical care and I'm not going to charge you anything when I take your young ones to my schools.

Effective February 7, 1962, just three years after the revolution in Cuba, President John F. Kennedy issued Proclamation 3447 which established an embargo upon all trade with the Government of Cuba. The proclamation stated that the United States was “prepared to take all national and hemispheric security by isolating the present Government of Cuba and thereby reducing alignment with the communist powers.” In defense of the embargo, the Kennedy administration also said that the loss of trade income with Cuba will “reduce the capacity of the Castro regime … to engage in acts of aggression, subversion, or other activities endangering the security of the United States and other nations of the hemisphere.” Despite the embargo, it is fair to say that over the last 50 years the Castro brothers have aligned themselves with every conceivable communist power in the world, they brought the planet to the brink of nuclear Armageddon, they unleashed havoc around the globe from Angola to Nicaragua, and the Cuban people continue to suffer under one of history's longest-running dictatorships. Thus, some would argue that the embargo has not worked and that it's time to lift it.

Both of my parents are from Cuba. They and my grandparents were among the fortunate families that were able to flee Cuba before the island became a tropical Alcatraz. My maternal grandfather was an attorney. So when Fidel Castro rolled into Havana in a military vehicle, he quickly understood the threat posed by the new regime. My paternal grandfather, Carlos Toraño, did not leave so quickly. At the time of the revolution, the Toraño family was one of the largest growers of Cuban tobacco leaf. My grandfather did what he could to resist the Marxist decrees, but eventually he was forced to turn over his tobacco farm to the State at gunpoint. My grandfather's main tobacco farm in Cuba was ironically named “La Esperanza”, which means “Hope.” That farm is still active and growing tobacco in Cuba today, although it’s now owned by the State, which stole it from him.

I am the first generation of the Toraño family born in the United States. The topic of Cuba has been a significant part of my life since I was able to put together a coherent sentence. A good part of my family life was hearing stories of the island and learning about its culture and traditions. Cuba was a dominant subject at the dinner table, and various social functions revolved around U.S. policy towards Cuba. I tell you this only to demonstrate that the topic of Cuba is personal to me. Members of my family were imprisoned by this regime, the fathers of my friends were jailed as part of the Bay of Pigs invasion, and most of my family and friends lost everything and had to begin a new life in a different country. You're damn right it's personal. And because it's personal, I, and many others in my position, have a real genuine interest in what's best for the present and future of the Cuban people.

The Cuban embargo will certainly end one day. We can all agree on that. The question is under what circumstances should it be lifted. I believe we should lift the embargo only when Cuba is clearly on the path to substantial political reforms that include the scheduling of free and fair elections, allow for freedom of expression, and rid the jails of political dissidents. To lift the embargo before these meaningful political reforms would almost certainly create a mini-China in Cuba whereby some economic freedoms may be gained, but at the expense of real political and individual freedom. The freedom of Cuba is tied to its political structure. If political freedom is gained, then economic freedom and vitality will follow. It will not work the other way around.

I'm always fascinated by those who believe that if we Americans trade with Cuba and spend more money in Cuba, then the weight of these dollars and the interaction with us enlightened Americans will somehow crush the regime and/or awaken some dormant zeal for freedom in the Cuban people. This is ludicrous. With the exception of Israel and Palau, the entire world has traded with Cuba for the last 50 years. Tourists from all over the world, particularly Canada, the U.K. and parts of Europe have flocked to Cuba for decades. Has anything changed for the Cubans? No. To be fair, in general, tourists don't care about the political freedoms or lack thereof of the Cuban people. For decades the Cubans from the island could not even stay or visit the tourist hotels, even if they could afford it. That didn't concern the tourists. They care about nice hotels, beaches, and an overall good time. What would make the American tourist any different? It's not personal, it's just vacation.

Same goes with the businesses trading with Cuba. Corporations have been doing business with Cuba for the last half-century. These corporations come from all over the world. Where are the freedoms? Where are the political reforms? Why haven't these corporations influenced or demanded more political reforms? Answer: because just like the tourists, that's not their agenda. I'm not indicting them for it (at least not in this article), I'm simply making the point that lifting the embargo and trading with Cuba will change absolutely nothing for the Cuban people. It's not personal, it's just business.

Speaking of business, let's talk about the business for which Cuba is probably most well- known: the cigar business. The cigar and tobacco business in Cuba was stolen (some prefer the word “nationalized”) by the government soon after it took power in 1959. Men like my grandfather lost their tobacco farms, owners of cigar brands like Ramon Cifuentes (owner of Partagas) and Alonso Menendez (owner of Montecristo and the H Upmann Cigar Factory) lost everything. These were real men with real families that were violently uprooted and stripped of their life's work by the same brothers who are still in power today.

The tobacco men who were forced to flee Cuba decided to recreate an entire new cigar industry in other countries like the Dominican Republic, Nicaragua, Honduras, Brazil, the Canary Islands and a few other countries. Having lost everything, they had every right to give up on the tobacco business and pursue other industries. Instead, they sacrificed, experimented in new tobacco growing lands, created new cigar factories teaching new cultures how to make cigars, and began to market new brands. Today, there is a vibrant non-Cuban cigar industry because of the work of that generation. For those of us in the cigar industry and for those who enjoy a good cigar, we stand on the broad shoulders of those men and their families who persevered and worked tirelessly to create the industry we now love.

If tomorrow we read in the newspapers that the U.S. government lifted the embargo with Cuba's existing totalitarian government, let there be no doubt that there would be a rush of Cuban cigars into the U.S. But here's my question: would I be allowed to go and open up a cigar factory in Cuba just because the embargo was lifted? Answer: No, because the government has a monopoly. Would I be allowed to finance tobacco growers in Cuba to export tobacco to our factories outside of Cuba? Answer: No, because the government controls that as well. So in effect, it would be a one way street from Cuba to the U.S., controlled by the Cuban government and whatever company it decides to associate itself with. This would be patently unfair to all of those who lost everything to this regimen.

Cuba can and will be free again. All of us need to demand and press for political freedom in Cuba. I don't believe pressing for an end to the embargo will achieve that for the Cuban people. The embargo is one way of expressing our condemnation of this dictatorship. We cannot give up on the dream of a free Cuba by substituting that dream for one of having a rum and Coke and smoking a Cuban cigar in Havana. I realize that there are many different views on this topic. For those of you who disagree or take offense at mine, remember, it's always personal.

This article is every bit as relevant now as it was back in 2013.

Lifting the embargo will only prolongue the plight of the Cuban people if the Castro regime refuses to change their failed policies.

Reading Time: 32 minutes New to Aganorsa Cigars? Aganorsa Leaf grows some of the world’s most sought-after Nicaraguan tobaccos, and are one of the fastest-growing boutique outfits in the biz. Check out our detailed tour of their entire portfolio, with tasting notes, now!

Keys to the City: Las Vegas