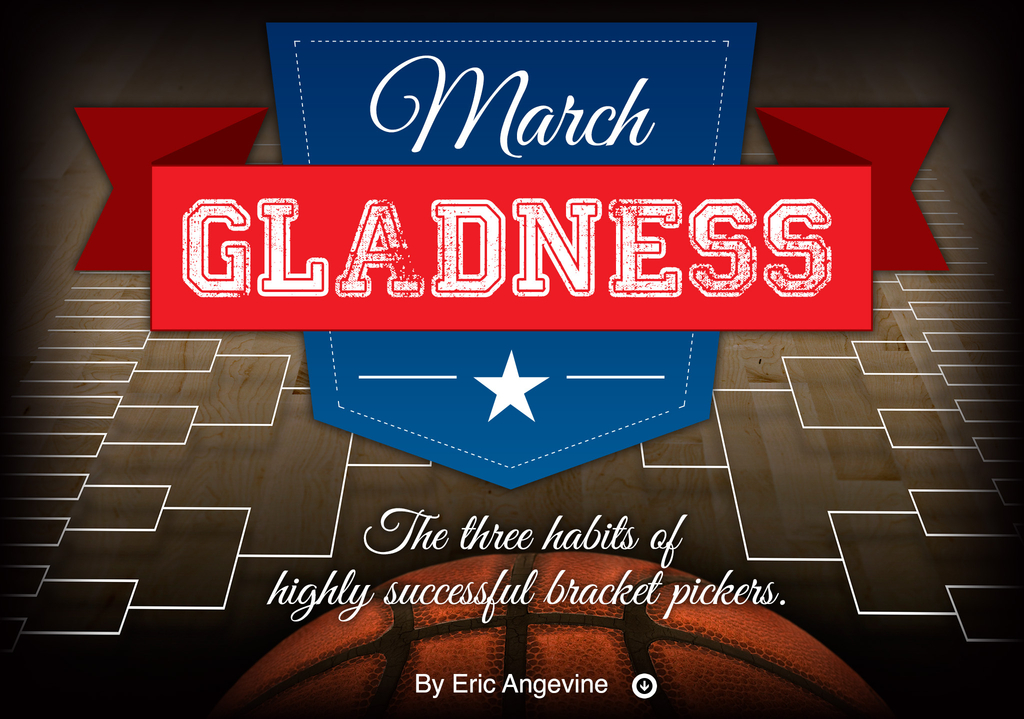 On April 2, 2012, the supremely talented Kentucky Wildcats cut down the nets in New Orleans, after being heavily favored to do so in the preseason. In 2008, all four No. 1 seeds appeared in the Final Four. Two tiny islands of predictability in the sea of chaos called March Madness.

The NCAA tournament is a thrilling Wild West shootout every season, and the fact that quick-draw artists like the VCU Rams might walk into the OK Corral is exciting. For those of us who like to enter – and win – bracket picking contests, it can be maddening.

Knowledge of the game can seem overrated during the college postseason. Everyone has seen the jerk boss who doesn’t know Notre Dame from North Dakota take home the loot. Other casual pickers use methods that provide plausible deniability in case of failure – “I flipped a coin,” “I let my kid choose,” and “I liked their uniforms” are common phrases this time of year – with occasional, infuriating bouts of accuracy. So is there any logic to this postseason NCAA roulette wheel?

Stockpiling blue chip talent is the first step toward greatness in any sport, and it works most of the time in college basketball. John Calipari won the 2012 title with a roster that turned out six NBA draft picks, including the top two. There’s a certain amount of confirmation bias there – you win a title, your draft stock rises – but pure ability wins out with pro teams, because there’s money on the line. If they’re willing to gamble on genetic lottery winners, why shouldn’t you?

Clearly, the team with the most talent doesn’t always win it all. Often, teams with less-heralded players advance deep into the tourney because they have better chemistry and a smarter game plan. The king of this category is Duke’s Mike Krzyzewski, who wins championships with hardworking four-year players more often than with superstar one-and-done athletes. Case in point: Duke’s 2010 title run would have been dead in the water without the steady, unspectacular play of journeyman center Brian Zoubek. Who? Exactly.

The other coaches on this list are future hall-of-famers for the same reasons. Jim Calhoun and Tom Izzo are living legends, and Florida’s Billy Donovan is on the bullet train to Springfield as well. And yes, Donovan had the same number of future draft picks on his roster in ’06 as he did in ’07, but not one of his starters made an All-America team that season.

Sometimes, it’s an incandescent superstar who drives title hopes. They need a supporting cast: Kemba Walker had Jeremy Lamb and friends in ’11, and Carmelo Anthony needed Hakim Warrick and Gerry McNamara to back his single-season run to immortality. But either of those teams was an also-ran without a charismatic do-it-all leader.

Why is Maryland here? It’s tempting to credit Gary Williams with a Coaching Genius slot here, but the head Terp’s entire Final Four resume rests on the back of one sterling player: guard Juan Dixon. Dixon’s light never shone as brightly as ‘Melo’s or Kemba’s, but he refused to lose in ’01 and ’02, taking his teammates along for the ride.

So how do you turn this info to your advantage? Easy.

First of all, stop sweating the first-round upsets. Picking them right is great, but they’re worth very little in the grand scheme of things. Luck can play a role in those early games, and that’s where a lot of the tournament’s fun comes from, but serious championship contenders rarely fall victim.

Millions of people nailed Louisville as champs last season, so the prizes went to those who shored that pick up with the right Final Four. This is where criteria 2 and 3 come into play. Kansas was the nation’s runner-up the season before due to a combination of Coaching Genius (Bill Self) and Army of One (Thomas Robinson). When you’re weighing your Elite Eight, any team that combines coaching savvy and at least one hot talent – like Butler with Gordon Hayward in 2011 – is worthy of consideration.

Anyone can choose the team with overwhelming talent to win it all. Use these criteria to fill out the rest of the field, and you’ll go home a winner.

Eric Angevine is a Sales Advisor for a major electronics retailer located in Charlottesville, Virginia. He has written for ESPN, CBS, and NBC.

Reading Time: 6 minutes What happens when a former cigar industry executive decides to get back in the game? If you have friends in the biz like Rocky Patel, among others, the sky’s the limit. Gary calls this Nicaraguan-forward cigar “opulent, complex,” and has all of the things that make it a unique boutique.

Reading Time: 5 minutes Cheesesteaks, Yuengling (pronounced ying-ling), and potholes the size of moon craters are as Pennsylvanian as it gets – but what about the tobacco? We spent a day at the Drew Estate PA Barn Smoker which, as a life-long Pennsylvanian, led me down the rabbit-hole of what goes into growing and using this heavy tobacco in cigars – and why some say it’s making a comeback.