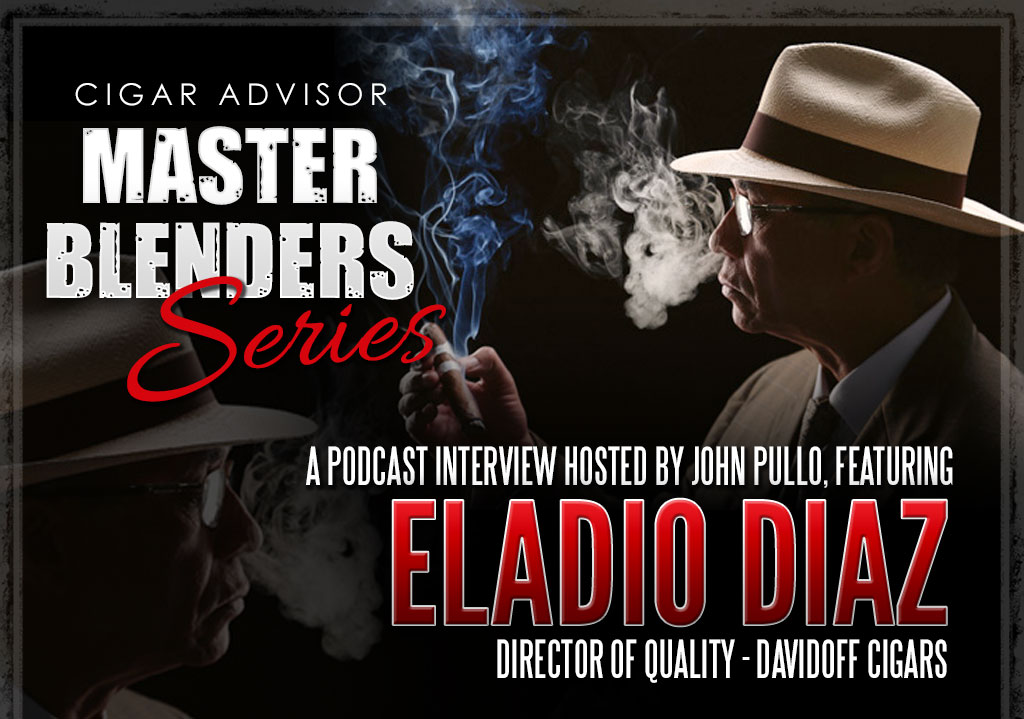 “A master blender ‘has control over the content, the diversity and time.’” And this is the blender’s challenge…changing conditions will produce variations in tobaccos every season; that means he must change his tactics to maintain consistent tasting cigars from year to year. “The palate of a Davidoff smoker is used to a specific thing…so you have to produce what is demanded,” says Eladio Diaz, Davidoff’s Master Blender and Director of Quality.

Eladio Diaz’ premium tobacco career has spanned most of his 60+ years, and it started out as modestly as it gets – sweeping the rolling gallery floors at a local tabacalera. Soon, he was stripping the tobacco leaves and sorting them by size; by age 10, Eladio was already rolling cigars.

He met Hendrik Kelner in 1983, who hired Diaz to oversee the making of Avo cigars; the two also collaborated on The Griffin’s, where Eladio was tasked with preparing samples for Zino Davidoff…the resulting blends were what scored Diaz the blending gig for Davidoff, when production left Cuba for the DR in 1991.

While he is focused on maintaining the consistency of existing brands and blends, part of his job is to develop new cigars. He’ll test two or three different blends a day: “We can still continue to out-do ourselves with new products and new creations that go beyond the norm. I want to create new blends that go beyond what’s customary.”

What does “beyond customary” smoke like? We wanted to find that out, along with what it takes to make a cigar that’s up to Davidoff’s exacting standards…so we went to the source: Eladio Diaz has his own space on Avenita Rafael Vidal in downtown Santiago De Los Caballeros, Dominican Republic, called House Blend Cigar Lounge & Bar. It’s a small but well-appointed shop and (as we learned first-hand) a great place to enjoy a cigar with a glass of rum. It’s there we scored a few minutes for a Q&A with Eladio about Davidoff cigarmaking basics, Cuban tobacco and more – click to watch the video now:

I’ve transcribed our whole discussion, below:

John Pullo: Eladio, as a master blender, how many iterations of a blend – or how many versions of a blend will you go through, before you finally decide, this is what this is supposed to taste like…”I’m done. This is the finished product…”

Eladio Diaz: We usually make various blends. Four, five, six blends. Of all the brands made at Davidoff, the most blends we ever made to be approved by them was for Puro de Oro Magnifico, where we made 30 blends. After all that…they chose blend number 6. (laughs)

J: Out of the whole cigar making process, which part is the least forgiving? [Requires most attention? No room for error?]

E: The most important thing for one to accomplish making a blend that is balanced, in equilibrium, and consistent, the way Davidoff insists upon, is to really know which are the important elements that conform to the palate and the desired taste. To know beforehand by region, by variety, which are the tobaccos that can compose that demanding taste from the palate of a Davidoff smoker. In reality, it’s having full understanding of which are the tobaccos that can be combined and achieve the balance of blend X or, I would say, different from what people are regularly smoking from other companies. We have vertical control of everything we produce. Though there are exceptions with cigars we make containing Nicaraguan tobacco, because those tobaccos are imported from Nicaragua. All other elements are controlled by us from the fields to production. Fermentation and aging are of vital importance. Time on tobacco is the same as time on a good wine. It’s necessary to have previous knowledge of each of the elements that are utilized in blending.

J: What’s the hardest tobacco to work with?

J: What are the qualities in a cigar that somebody should look for when choosing which cigar to smoke?

E: The most important qualities in a good cigar are that it is balanced, that it’s not overpowering; in other words; not be a cigar that you only feel strength. It should have equilibrium everywhere and participates in all parts of the mouth. To be a pleasant cigar to the palate. Because a cigar is a friend. And that friend…One does not want to stop enjoying themselves with him and share time with him. And not a friend that is attacking you with every puff. So, what I look for in a cigar, initially, is that there is a harmony, like nice music, there has to be a good equilibrium, good sound, good taste, a chorus, an ensemble…that does not have any disequilibrium or peaks. So that, in reality, it manifests in the entire mouth and to be a cigar that can be enjoyed and that one remembers and yearns for. (laughs)

J: Last question for you…we were talking to Henke before. In the United States market, so much about Cuban tobacco is…talked about. What are your feelings on using Cuban tobacco, and is it something you want to do? Or something that you just don’t feel is necessary?

E: If the opportunity arises where we can acquire tobacco from Cuba, the combination would be ideal with tobacco from here. Now look, we worked and fermented with a Davidoff concept, not a cigar like they are working in Cuba now, which are too fresh. Being tobacco that still is too young. Now…I would give it the time and fermentation the way they used to do in Cuba – 3 years of aging in tercios. BEFORE even starting the process of producing cigars. If I had the opportunity, we’d be able to make better cigars because Cuban tobacco is very good when you know how to work it the way it should be worked. Like the way they used to do it, before Fidel.