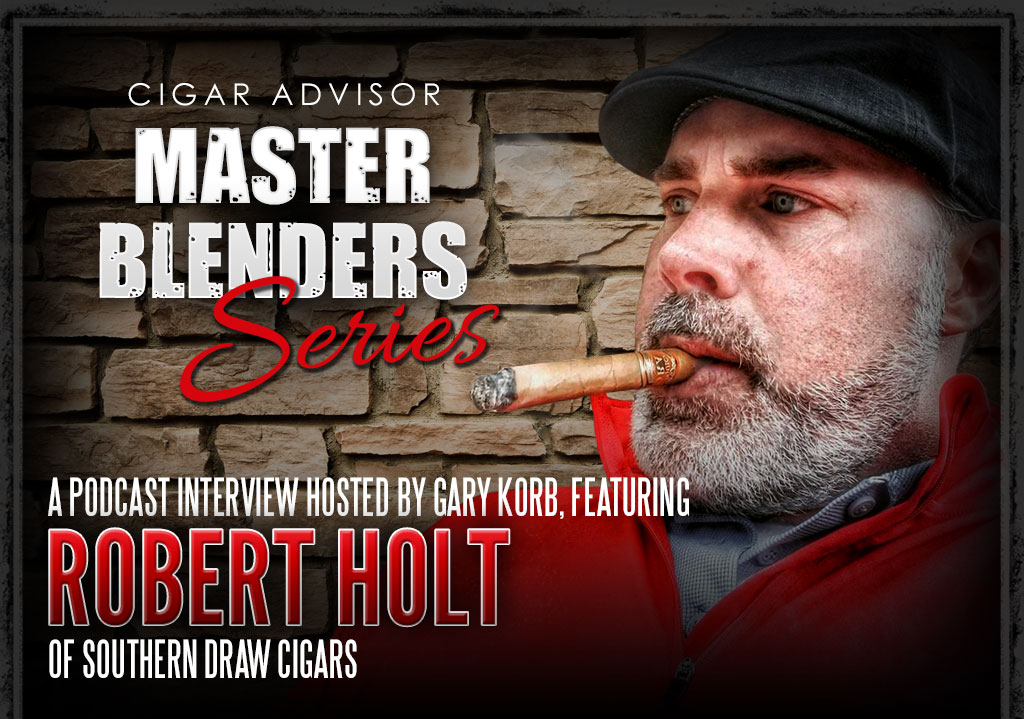 For this latest podcast, we welcome Robert Holt, U.S. Army veteran and founder of Southern Draw Cigars. Thanks to A.J. Fernandez, who blends the cigars for Southern Draw, combined with Robert’s tireless travel schedule promoting the Southern Draw brand at cigar stores across the country, his company has amassed a huge and dedicated following. Robert talks about Southern Draw’s hottest new cigars, Jacob’s Ladder, Rose of Sharon, and more, plus, Southern Draw’s “vision,” Robert’s commitment to God, family, and country, and much more in this stimulating interview.

Robert Holt, U.S. Army veteran and founder of Southern Draw Cigars, is on a mission with a vision – a vision is based on the “Southern Gentlemen” tradition – a “culture of honor” as it were, where people intentionally avoid offending others and maintain a reputation for not accepting improper conduct by others.

“I think we can all agree that these are good principles to live by, no matter our current environment, mindset, stress level, or even the mounting pressures of life,” says Robert.

In addition to Southern culture as it relates to their cigars, there’s also the importance of the Draw, which Robert refers to as, “that wonderful, tightly rolled bundle of dried and fermented tobacco that is ignited so that its smoke may be effortlessly drawn into the mouth.”

Working alongside Robert is his wife and co-founder, Sharon Holt, who oversees the mission on the home front, while Robert spends over 300 days a year on the road “converting” cigar smokers to the brand. And it’s working. Few boutique cigar brands have had as much success in such a short time period.

One of the reasons behind their success is that Southern Draw only produces custom-blended cigars handcrafted in limited edition by A.J. Fernandez and his team at Tabacalera Fernandez in Estelí, Nicaragua. (They currently produce a monthly limit of only 5,000 cigars per blend). Robert is equally involved in the blending process, ensuring that every Southern Draw cigar has been made to the high standards which he and A.J. have established. Add the legwork that Robert puts in to promoting the Southern Draw brand on a day-to-day basis, and it all adds up to integrity, which lies at the heart of the company’s philosophy. Borrowing a line from author, Charles Simmons, Robert says, “Our belief at Southern Draw is that integrity is the first step to true greatness.”

Listen to the podcast with Robert Holt here:

Excellent! I hope the word gets out on this great burgeoning boutique brand.

Looking forward to trying all the Southern Draw cigars. Enjoyed the podcast and the background of Southern Draw

I’ve enjoyed Rose of Sharon and Firethorn, I’ll definitely have them again.

Reading Time: 4 minutes “You can tell the Maestros chose some really prime leaf,” says Gary referring to the all-Honduran tobacco core in his review of the H. Upmann 1844 Classic Robusto. This latest addition to the H. Upmann 1844 Heritage line also boasts an Ecuador Connecticut Shade wrapper. This combination amounts to what the company calls a “next level shade” cigar.” Learn more about that and what Gary thought of this cigar now.