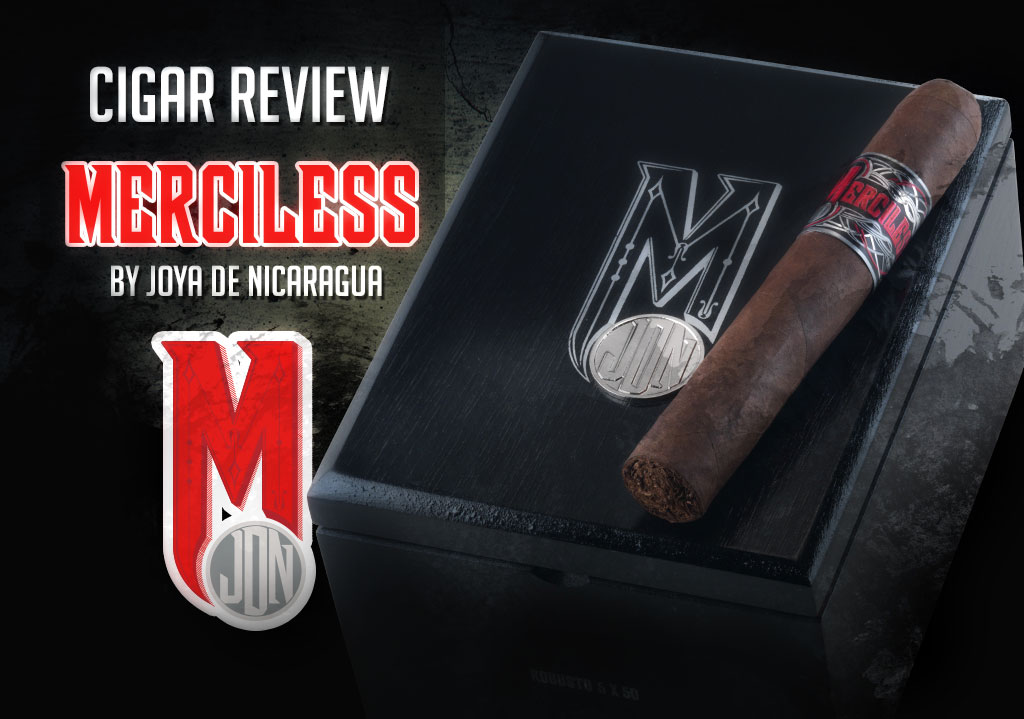 The Cigar Advisors have gathered again to burn another cigar in the name of taste-testing…and this time, we have Joya’s latest line in our sights: Merciless by Joya de Nicaragua. Sparked by the desire of full-bodied cigar enthusiasts for something new, Merciless was blended to meet a “take no prisoners” approach to the taste buds – an art which JdN has perfected. What’s interesting to learn about this cigar is that is one half of a yin-yang duo with it’s sister smoke: Cunning by Joya de Nicaragua is similarly finished in a Habano wrapper, but presents a more mellow smoke than what we’re having here. We’ll review Cunning soon; in the meantime, Merciless is available in 20-count boxes, in the 4 most popular vitolas (Churchill, Magnum, Robusto & Toro). Today’s Merciless by Joya de Nicaragua cigar review is of the 6″ x 50 Toro: watch the video review for all the heady details and our impressions, or you can jump right to our individual tasting notes first (below). As we’ve said before, no scores or numbers at Cigar Advisor – we just tell you the qualities we’ve found in the cigar, and whether we think it’s something you’ll like, if this is your kind of cigar. Watch it now!

A well-made, full-bodied cigar as one would expect from Joya de Nicaragua. The cigar is well packed, seamlessly rolled, draws easily, and lights evenly across revealing a firm, light grey ash. Well-balanced flavors of earth, wood, leather and spice kick it off and eventually round-out to a very full-flavored, full-bodied smoke that continues to build stealthily in fullness down the line. During the latter stages, the flavors maintained their character, however, the smoke turned heady causing me to put it down for a few minutes.

Although I’m a big fan of Joya de Nicaragua cigars, the Merciless Toro was a little too overpowering for me. The flavors were consistent throughout, which held my attention, but it could be that this cigar landed a little outside my comfort zone because I smoked it in the morning. That said, I would caution newer smokers who want to dip their feet in this pool to smoke it in the afternoon or pair it with cafecito, or a good port or single malt after dinner.

Suffice it to say, Merciless may not be for everyone, but I can see this selection becoming a regular “go to” for cigar smokers who drift toward powerhouse Nicaraguan cigars.

Construction and Overall Appearance: Spot on. Great dark brown complexion with no off color spots, protruding veins, soft spots, or anything. And the band is pretty sweet too.
Draw (airflow): One cigar of the 2 I have smoked had a somewhat tight draw that was made better by simply rolling it in between my fingers to loosen up the tobacco.
First few puffs: Jiminy Crickets, is there ever a lot of spice! But it goes away after a short while.
Retrohale: With how much pepper I got in the beginning, I was afraid this would be the equivalent of shoving a hot branding iron up my nose. I wasn’t going to risk a retrohale.
Base flavors: After the spice receded, it’s a well-above-average full bodied, full-flavored cigar. Earthy notes along with a strong wood characteristic presented themselves along with some dark chocolate or baker’s chocolate, and some sweet leather. The spice is still there, but he’s peeking his head out from stage left instead of being in the main production.
Aroma: Similar to the smoke. Really rich and heavy. Complimented the smoke very well.
Burn / Ash Quality: Great burn to say the least. No wavering, tunneling, and canoeing.
Balance of flavors: Too much spice up front at first, but once that recedes, it’s a peach of a cigar.
Consistency: From one cigar to the next, it’s always the same experience.

This is a heavy hitter, man. One for the record books, to be honest. I know I keep harping on the pepper, but Merciless is massively spicy up front. Once you get past that, it’s an incredible smoke all the way down to the nub. It’s not the most complex cigar on earth, but it rivals everything else I’ve blazed for any of our other Joya de Nicaragua cigar review panels. I mean, we’re talking off the charts strength and flavor at an incredibly low price. I said it in the video review, and I’ll say it here: For the price, this is one of the best full bodied cigars on the market. It’s a primo advertised a pauper prices. I will definitely be picking up my own box in the near future. Absolutely fantastic. But be warned that this is for full bodied smokers only. Like I said, it’s a doozy.

It was a solid smoke all the way through. Flavor, construction, ash, everything was great.

Too spicy up front. I was really struggling at first, but after 5 minutes it became incredible.

Ladies and gentlemen, may I introduce to you the new cigar from Joya de Nicaragua known as Merciless… and guess what? It’s wickedly full bodied – SURPRISE, SURPRISE!

The good people at Joya make a lot of enjoyable smokes and now they’ve added Merciless to the mix, a cigar appropriately named for its uncanny ability to pound the palate with a plethora of full flavor. While some premium handmade smokes start out slow, taking several good puffs to release its flavor, the Merciless opens up like a power trip right from the get go.

From that very first draw I got a shot of peppery spice; but only a quarter inch in, it began to round out nicely – notes of wood were predominant followed by some nice hits of dark cocoa. As for construction, this stick is rolled with expertise and the draw is flawless as it bellows with thick, chewy smoke.

Now it’s not by any means a morning smoke, which is unfortunate – because that’s when we did the shoot. So suffice it to say, the cigar I smoked for the Merciless by Joya de Nicaragua cigar review video hit my palate a bit harder than it did when I had a second one after a hearty steak dinner. Trust me, it’s the perfect post-supper dessert that goes wonderful with a thick stout or a nice pour of whisky.

The verdict: I liked it a lot and will try pairing it with different foods and drinks to see what works best. And while there’s a lot of good things about the Merciless, the nice price makes it even that much more attractive.

Reading Time: 4 minutes Aganorsa Leaf’s famed Nicaraguan Corojo Shade wrappers make their debut on the Famous Smoke Shop exclusive cigars list. Cigar Advisor’s Jared Gulick lights one up and gives the skinny on the cigar’s flavors – see his full cigar review on Aganorsa Leaf Exclusivo and find out if it should be in your humidor.