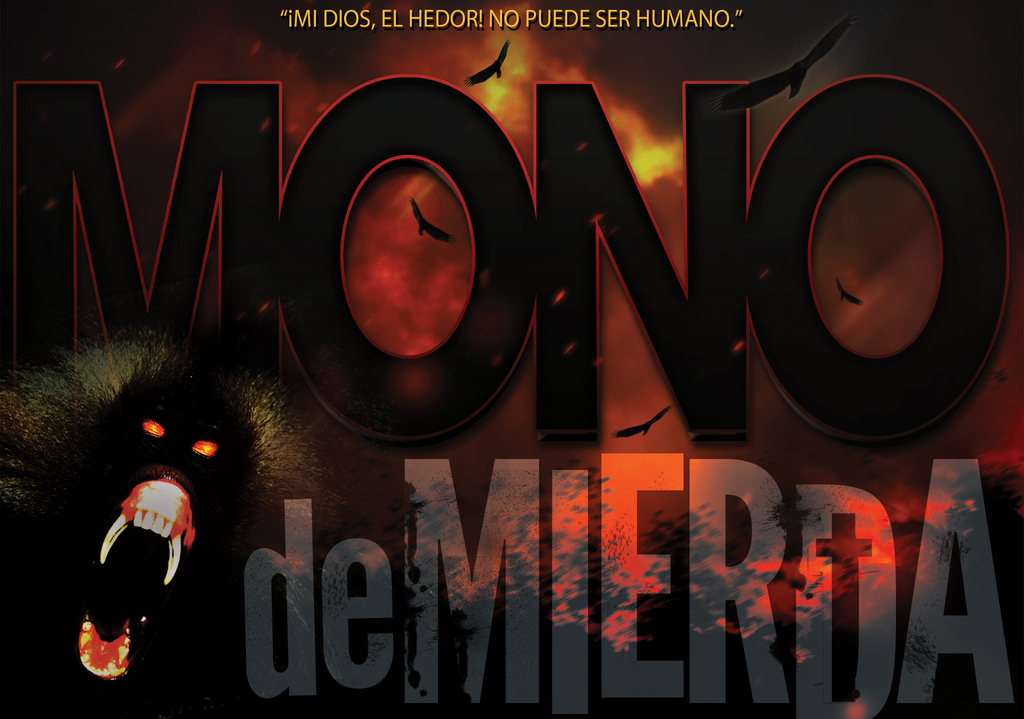 On 21 December 2012, many folks in the U.S. were anxiously eyeing the calendar, waiting for something weird to happen.

Several thousand miles away in Copan, Honduras, it did.

While much was being made of the so-called “Mayan Apocalypse,” early Decemebr 2012 saw a flood of local reports there concerning an unidentified animal. With scant details on how the end of times was to come about, thoughts turned to natural disasters. Copan locals, however, recalled a different interpretation. The gods were returning to earth, and were going to use it as their hunting grounds.

There has been a story, told for generations by local farmers to their children, of an ape- the size of a small man, under 5 feet- called “Mono de Mierda,” kept by the Mayan gods as a pet for hunting.

The conventional wisdom was that the Mono’s existence was, of course, a legend; something for those farmers to scare their children from staying out late in the fields at night.

No one, except for the most elderly, could accurately describe this shaggy, feces-encrusted beast that walked upright, in a lurch; it had yellow eyes, and a long tail.

They said it loved in the caves that dot the valley’s hillside, and came out to satisfy a voracious appetite.

It ate everything-stealing fruit from the plantations and stalking small livestock(like roosters and calves), taking its plunder back to the cover of the tobacco fields and slaughtering its feast.

There was never proof of the Mono de Mierda’s handiwork, other than oral histories- though the farmers’ children would get nervous when some small animals would disappear now and again, and that odd odor hung in the air.

Then came the blood- and the smell- in the field.

The first real evidence of the Mono de Mierda’s presence in the tobacco fields was spotted on some of the smaller, outlaying farms in the Santa Rosa region, between La Cutilca and La Cuchilla- north and east of the Maya ruins in western Honduras, near the border of Guatamala- not far from the caves in the hillside.

A few kids had gone missing from a local goat herd- and while everyone figured wild scavangers, a few men began to suspect the Mono de Mierda when a stacked pile of bones and goat hides were found- and the tobacco plants were broken and spattered with blood.

“A dog would not do this,” they said. “A dog would drag its kill. These animals were carried away, feasted upin. The smell! This is the work of Mono de Mierda!”

Word quickly spread through the countryside of this, and more attacks- leading to a flurry of calls to the news offices of CBC Canal 6 in San Pedro Sula.

The station’s news director was originally skeptical, and initially declined to send someone from the team because of the length of the trip: with the news operation being 2 hours away, the time it took to travel over CA-4 (the main motoway)- then through backroads and trails- was too long, especially for what he considered a false report by impressionable locals. That is, until some evidence began to surface.

Once he recieved these pictures, a crew was dispatched immediately; but they were unable to investigate before the farmers had panicked and destroyed the evidence.

Marino Sarmiento, a farmhand who saw the man-ape’s work on the outskirts of a local tobacco farm, told Canal 6 reporters, “The Plants looked flattened. But it was like mothing a man could do. Bones and blood everywhere. It was a force from the earth, and it came from the RUINAS. It has the HEDOR. Mono de Mierda- I am sure of it.”

He rubbed his eyes, unable to stop them from tearing up. 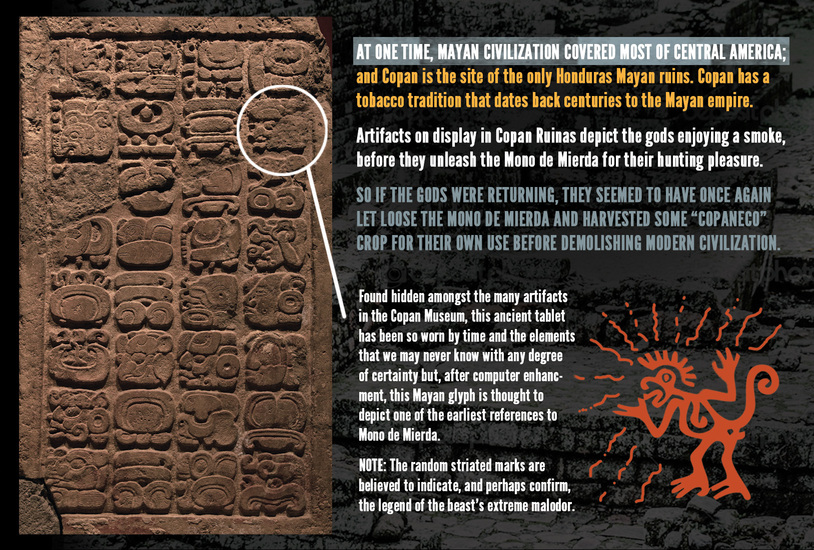 Representatives of the Honduras Ministry of Agriculture and Livestock had no comment, even though government officials were witnessed coming in and out of the area for days.

The administration’s small planes and helicopters were spotted circling the killing zones- but still nothing was admitted to the news agencies, other than they believed it to be “mischief.”

It seemed to be a lot of people to investigate mischief.

There was no evidence of any disruptions in the crops in either the Jamastran of Talanga valleys.

Maya Selva- president of Aprotabacoh, the Honduran Association of Tobacco Growers- believes that this is an incident isolated to the Copan Department. She is also aware of the Maya gods myth being described- but she is less inclined to disbelieve its truth.

We are waiting to hear any updates from minister Regalado, or anyone from secretaria, but in the meantime, it seems as if the Mono de Mierda is hunting… again.

This is believed to be the only photo in existence of Mono de Mierda, taken un-knowingly by an American tourist at the Copan Ruinas in the summer of 1979