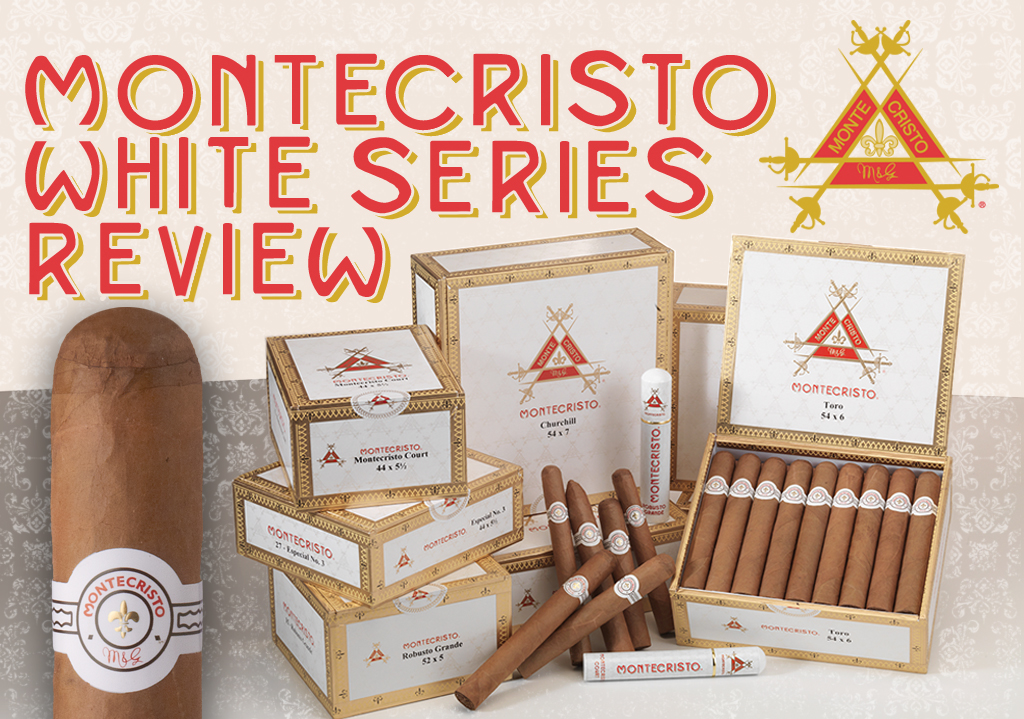 Today I’ll be giving you all my Montecristo White Series cigar review. To start off with a little history behind the band, Montecristo White Series cigars were created to complement the original Cuban Montecristos. They did a pretty good job, too. Though it’s difficult to compare the two note-for-note, the White series certainly has many of the same characteristics found in the Havana-blend. The Ecuadorian Connecticut Shade wrapper is cured to a light, buttery blonde color similar to Cuban Corojo. If I were to put the brown Cuban Montecristo band on this cigar, you’d probably think it was the original. Using a Nicaraguan binder and a core blend of Dominican and Nicaraguan long-fillers, the White offers a rich, creamy and naturally sweet taste found in many Cuban cigars. Since the Montecristo White Series has its own distinctive character, I’d rather not digress any further on comparisons to its contraband cousin.


As I noted above, the appearance of the cigar starts with its silky, light blonde wrapper leaf that was virtually free of any noticeable veins, and topped with a well done triple cap. As for the construction, the packing was firm from top to bottom, and when cut with my XiKAR Xi, the cap came cleanly off in a perfect circle.

The cold draw seemed a bit snug, offering a sweet, nutty flavor with a note of hay. The toasting and light were a little sloppy, but I had to take into account that the cigar was a little more moist than usual. However, once the cigar got going, the draw opened-up to just the right amount of pull.

The burn started off a bit unevenly, but corrected itself within the first 3/4 of an inch. The ash was mostly light-grey (almost white) in color, and was firm enough to hang on for a while, but came off easily when I tested it for firmness against the ashtray wall. Flecks of ash also tended to fall off between moving the cigar from my mouth to the ashtray. That said, when rolled in the ashtray it was easy to form a nice cherry shape. The ash was also much firmer during the last few inches.

The first puffs of this Montecristo White Series cigar were earthy, woody, sweet, and ultra-smooth with a payload of rich-tasting thick white smoke on a long finish. When retrohaled, I got a clear impression of just how full-flavored this cigar is. Though the retrohale had an ample shot of pepper, there was no peppery taste at all when smoked normally. As the cigar began to settle in, I determined the base flavors were those of earthiness and sweet wood with some nutty notes, giving this cigar a fair amount of complexity, excellent balance, and a sweet and woody aroma.

In terms of overall flavor and consistency, this cigar was excellent. As for the strength, the Montecristo White builds to a more full-bodied smoke once you get toward the midsection. When allowed to rest between puffs, I found the smoke to be much more consistent in flavor and balance. The cigar required only one relight because I stepped away from my desk for a couple of minutes, but picked-up right where it left-off. The double band (not shown in older photos) ensures you know you’re smoking the Montecristo White Series, because the words “White Series” appear on both the neck and secondary bands. I suppose this was done because they figured most smokers would remove the secondary band first.

For a medium-bodied cigar there was plenty of sweetness and flavor, which made the Montecristo White Series very hard to put down. To avoid the cigar from turning juicy or possibly cracking from over-puffing, I kept reminding myself to let it rest. When it cooled down a bit, each puff was superb. Its full-flavored zing comes from the Nicaraguan tobaccos used in the filler and binder, yet there wasn’t one overpowering note to be found. Moreover, this cigar is a great example of “a well-rounded” smoke.

This selection should appeal to smokers who enjoy mild Dominican cigars like Macanudo Café.  The Montecristo portrays a very similar smoke in the smoothness and aroma department, but has a lot more depth. You want to pay attention to this cigar.

I hope you’ve enjoyed my Montecristo White Series cigar review as much as I enjoyed smoking it while writing! It was hard to find anything negative about this cigar, and I suppose the real proof is that when I finally put it down, only an inch was left.

I agree had one on vacation in Las Vegas and absolutely loved it. All your descriptions were spot on!!! Very nice cigar

I’m just starting out.. Again. Seems like I don’t have to look no further! TC

It smokes as reviewed a nice cigar all around

As the author says, you kind of have to let it rest frequently to avoid any sort of cracking. I learned this after the first couple of these. Very flavorful smoke.

This was an awsome [email protected]

As I was reading the reviews I’m enjoying a Monte Crisco White. I had been searching for the Perfect Cigar and I found it in the Montecristo White. Really great great smoke

Hi Leroy –
Yes, the Montecristo White sel. is a true classic. Very consistent.
If you like that, try the White Vintage with the Connecticut Shade wrapper and compare to the Ecuador on the original.