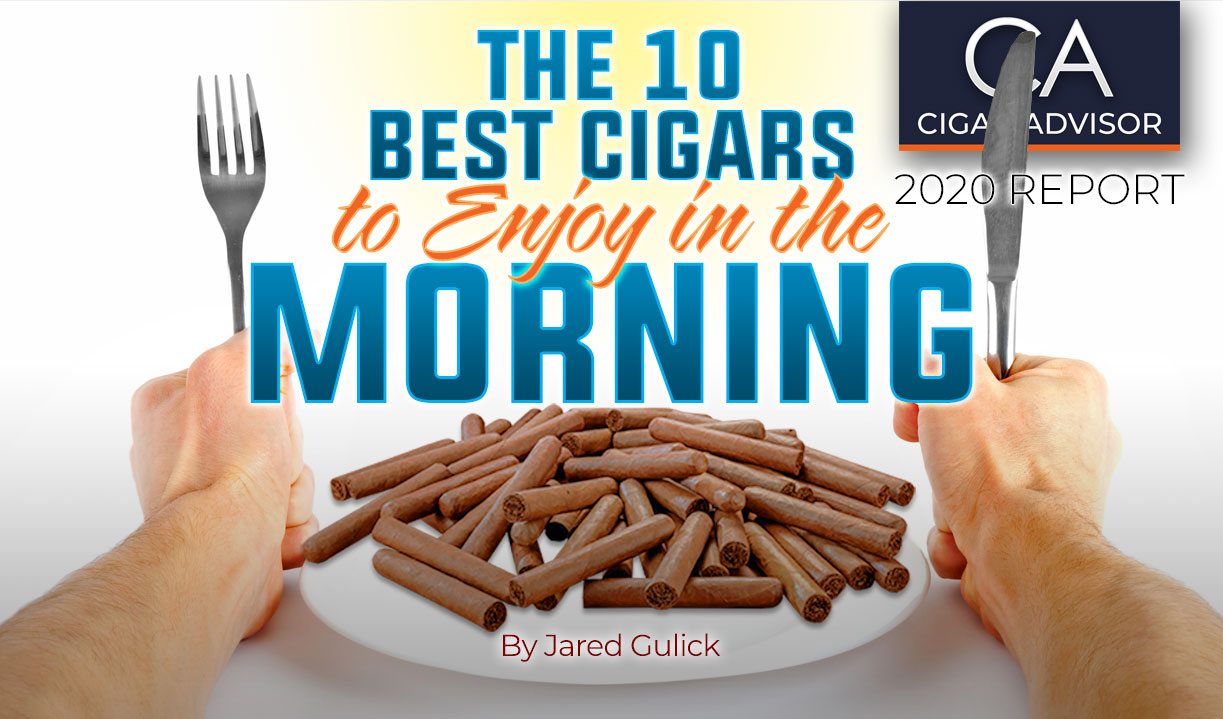 Our Favorite Breakfast Smokes: Best Cigars to Enjoy in the Morning

We’ve talked about after-dinner smokes, but they say that breakfast is the most important meal of the day. I’d argue your morning cigar is your most important smoke, too. It sets the tone of the day and can even influence your mood in the same ways as food. And if I’m honest, I can’t think of any bad days that started out with a plate full of bacon. Can you?

And that brings me to an important point. Bacon is universally loved. It sizzles and pops while you fry it. And it’s hearty all the way down. I’m sure there might be a handful of you reading this who don’t like it (condolences) but it sits in the same comfortable popularity position as kittens, pizza, and memes. 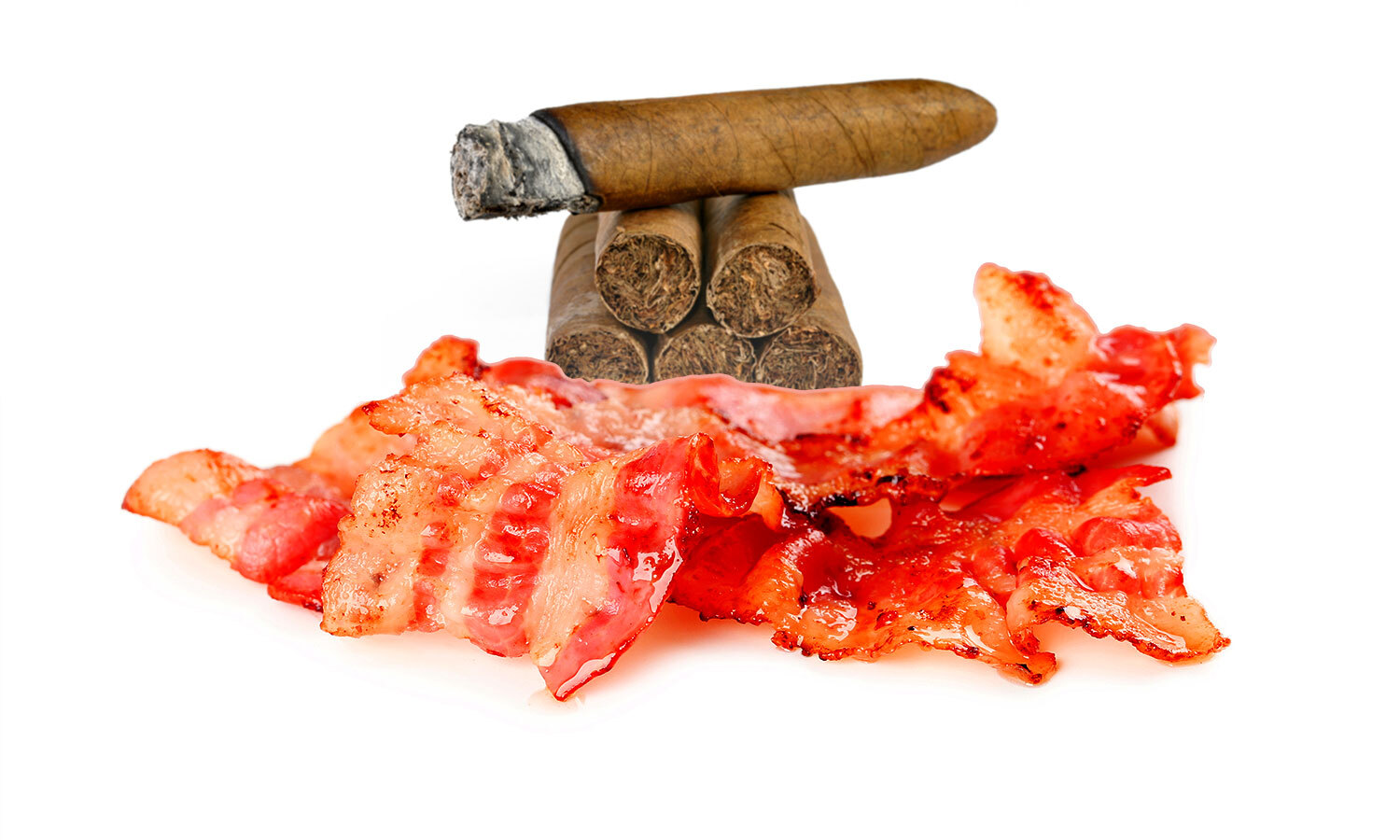 “So, uh, why’s he rambling about bacon?” That’s a great question. Imagine a cigar store selection like they’re items on a menu. You’ve got all sorts of options. Some sound great. Some don’t. But nothing will top that savory, finger-licking bacon. That’s what I’m trying to help you find...you know, the cigars that when smoked made us say, “holy $%@! – this is great!”

In this guide, I’ve curated the ultimate breakfast cigar menu that features all price ranges and flavor profiles. They all smoke smooth, but each have their own nuances and character that make them special. Our list spans popular brands like Macanudo and Rocky Patel, to boutique favorites like Dunbarton Tobacco & Trust and Crowned Heads, and even to hidden gems like La Unica.

If you can’t find a cigar to smoke in the morning here, you’re probably better off waiting ‘til lunch.

When breakfast needs to take you into lunch, there’s the Churchill size of the original ‘breakfast’ cigar – the Mac Café. I like to call cigars like this ‘OG.’ They’ve been around forever and are still gobbled up just as consistently as they began. Lots of smokers poke fun at older brands for being too mellow, but Macanudo’s sales numbers  don’t lie. Smooth notes of sweet cream and cedar, plus a layer of leather and earth. It never hits hard and that’s the point. All the Connecticut-wrapped flavor and none of the kick.

Ever since our review in 2019, Blue in Green has been one of my favorite go-tos in the morning. That’s because I found it best smoked on a clean palate. Unless you’re smoking at 3:00 a.m. like our buddy John Pullo, this cigar will shine with your first coffee. A lot of that has to do with the filler tobaccos. They’re all Nicaraguan, and this gives the cigar a boost in flavor without hurtling it over the edge. I found oak, a tangy citrus flavor, along with some tinges of earth and nuts. All said, this is one cigar you shouldn’t sleep on.

Everyone knows Rocky makes bolder stuff. That’s also true of this Rocky Patel Vintage Connecticut 1999. In a nutshell, it’s geared for full-bodied aficionados who appreciate richer flavors from their morning cigars – so if you want thicker smoke and drink your java black, sign on the dotted line. Here’s the skinny: the sweetness is lighter thanks to aged Dominican and Nicaraguan leaves at the center. It’s still silky but more importantly, accessible – even to the newbies. If you’ve been smoking seven days or seventy years, there’s plenty to enjoy.

It’s a Davidoff for less than $3. What else is there to say? As nice as it would be to pack it up here, there are a few things worth mentioning. 1: It’s not just a gimmick. The three of us put it to the test, and it passed all of our litmus tests.  2: It comes in a tube. Sure, that gives it some swanky looks, but it also means it’s portable. If you’ve ever crushed a cigar accidentally in your pocket, you’ll know what I mean. 3: It’s excellent smoked in the morning. That’s why we’ve featured it here. To my palate, it’s got a cookie sweetness with notes of cedar, wood and sweet grass. Pair it with some tea and you’ll give sunup a new dimension.

Tabak Especial is like a warm cup of mocha drizzled in chocolate. Imagine that dark cocoa flavor in the smoke of a cigar. I’m willing to bet most of you have tried this Drew Estate gem at some point, but a few in the anti-infused crowd still refuse. No one’s going to think you’re less of a smoker if you try one – but I’d be willing to bet that your taste buds would thank you. Steak is great, but so is cake, and this cigar, in all its Nicaraguan estate-grown coffee infusion glory, is the king of dessert smokes. Even when dessert is at 9 a.m.

Capulet is one of our favorites…and yours too with a whopping 146 reviews averaging four stars. Its Connecticut wrapper blends perfectly with Honduran and Nicaraguan tobaccos underneath for lush notes of nuts, toast, and a woody sweetness throughout. But the greatest triumph – that’s its price. You’d be hard-pressed to find a better value breakfast smoke that produces as much flavor. This is for all you daily smokers out there – a tasty blend that won’t leave you broke.

What I love more than anything is being able to share great cigars that don’t receive any love in the press. Cigars like La Unica Cabinet. It’s a collaboration between J.C. Newman and Carlos Fuente Sr. and rolled with your choice of genuine Connecticut Shade (shown above) or Connecticut Broadleaf Maduro wrappers. Both are mellow and produce smoke that’s woody, slightly spiced with white peppers, and smooth. You’ll find additional cedar notes from the Shade and a sweeter – almost cocoa – note from the Maduro. Either way, this is one sleeper you’ll be glad you found.

Everyone said Led Zeppelin couldn’t make a ballad. Given Crowned Heads’ portfolio, you’d be forgiven for thinking the same of them. But when they rolled out their Stairway, Luminosa, I did a double take…and by that I mean smoke. Its Ecuador Connecticut wrapper is perfectly golden brown and pairs nicely with a heartier Nicaragua core for medium-bodied notes of butter, cashews, and light spices. Never thought I’d see a breakfast-ready Crowned Heads before Luminosa came around, but I’m all about pleasant surprises. This is worth a look, and a second one, too!

If there was a cigar sweetness scale, Brulee would be at the top. That’s because Dunbarton’s owner and master blender, Steve Saka, knows what makes a cigar naturally sweet. He wasn’t looking to slam your senses, but instead, take you on a tour of what Connecticuts used to be like before the boom went and made them all stronger. The cigar is mellow and silky with notes of vanilla, cedar, cream, and a dash of white peppers. Stop here for a super-premium that’ll get your day started right.

New Wave is like the Denny’s Grand Slam breakfast of cigars. It’s easy to afford, gives you a little bit of everything, and leaves you smiling on your way out. Here’s a breakdown: it’s one of the most affordable in E.P.C.’s lineup, comes in five sizes, and boasts a mellow-to-medium-bodied blend of Dominican and Nicaraguan tobaccos in its core. Of course, there’s the blonde Connecticut Shade wrapper that’s cloud-grown in Ecuador, too. Summary: you’re in for a cigar brimming with earthy flavors, a light sweetness, and a burn that’s velvety to the core.

Sometimes, it’s hard to choose what to have for breakfast. Bacon and eggs? Pancakes? Sausages? That’s when it’s time to hit up the breakfast buffet and have a little bit of everything. How about a breakfast buffet for morning cigars? Easy: the Petit Corona Mellow Sampler. From the buttery smoothness of Rocky Patel Vintage Connecticut, the cedary-sweet profile of the Ashton Classic and more, there’s 2 of each cigar, so you can even go back for seconds.

The Goldie, Davidoff Colorado Claro, and Quesada Reserva Privada are also go-to smokes for me.

Drew Estate Tabak is also a nice after breakfast, with coffee smoke?

Good choices. I would add to the the RP Cargo Nicaragua. A nice mild – medium stick.

I enjoy Punch Champion With a good cup of Coffee … Have a good day ..

The Camacho Connecticut is my morning favorite although I would certainly not reject a Montechristo Classic Robusto.

I enjoy a nub Cameroon in the morning

I wold agree on the CAO Gold, and Montecristo. I would add Nat Sherman Host (Host Maduro is pretty good in the morning as well). I would also add Macanudo Gold Label because the lemony sweetest pairs well with the coffee (like having a lemon danish with coffee.).

My number 1 breakfast choice is Davidoff 2000!

The padron damaso is a perfect morning smoke with strong coffee. The avo syncro robusto is also a great one.

Perdomo 20th Anniversary. has my vote6

Thanks for reading, Mike!