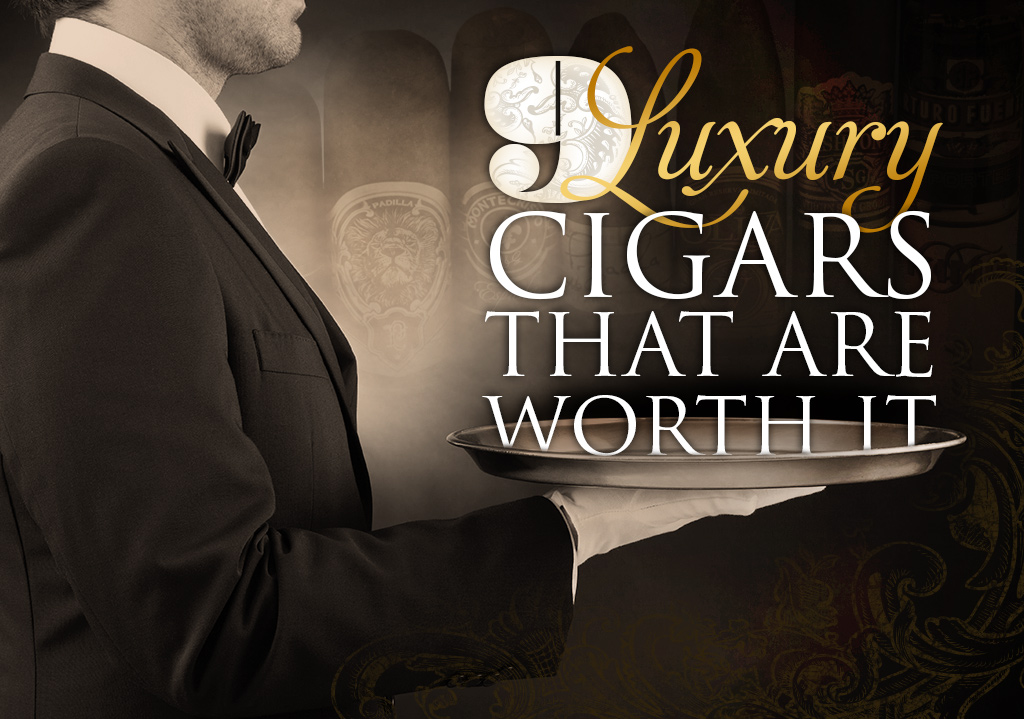 2015 CA Report: 9 Expensive Cigars That Are Worth It

Luxury Class: 9 Expensive Cigars That Are Worth It

There’s an old saying among us lovers of the leaf that says, “Life is too short to smoke cheap cigars.” And, while I do adhere to that for the most part, it doesn’t mean that you “have to” smoke the really expensive stuff, either. It’s kind of always a good rule of thumb to smoke what you like and what you can afford.

We all know that cigars can run the full gamut on pricing, from a buck a piece for the bundled stuff, up to $50 a piece for the insanely exotic and supposedly rare blends. And we all know guys who are flat-out cigar snobs, who will only smoke the expensive stuff because they wouldn’t be caught dead with a $7 cigar. God forbid. And worse are the Cuban snobs who spend ridiculous coin on Castro contraband that’s grossly overpriced and often times as real deal as a Milli Vanilli comeback tour.

So, here’s the deal… while there are a number of so-called luxury cigars that I feel are NOT worth the money, there are a lot of sticks out there that are worth it (in my most humble opinion). Now the first thing that needs to be said is that this is all pretty damned subjective. I mean what I like and what you like could be vastly different. But, whether we agree or disagree on what we like, I can tell you this: I would have to say that most of the luxury/expensive cigars on the market are made from excellent tobacco, they’re well-aged and generally grown in smaller amounts. They are rolled by the more experienced factory torcedors and are usually box-aged a while longer as well. And the amount of boxes made are usually produced in more limited quantities.

Now the subjective part here is whether they’re good or not… and even more so, are they worth it. So I’ve picked a number of what you might refer to as expensive cigars to give you the lowdown on what I personally enjoy, and, which ones I feel are worth a try. Hey, every once in a while you want to break from the norm and smoke a stick that you can’t afford to keep in the regular rotation, but want to treat yourself with for whatever reason.

The first thing I think we need to define is: what is the criteria for an “expensive” cigar. And I personally think that anything $10 and above is a good starting point for this article. So, I’ve put together a little list that will hopefully help and guide you in making the decision if each of these sticks are indeed worth the price. And lastly, I hope you realize that I literally forced myself to smoke each and every one of these pricey treats, all in order to give you an accurate account on what to expect. Yeah, I give and I give for you guys, selflessly and generously because I care so much about this amazing and wonderful industry.

So let’s take a look at nine cigars that are yes, pricey, but if I had the funds, I’d smoke ‘em every day of the week…

The Melanio blend was rated #1 in 2014 for a damned good reason: It is just outstanding. This maduro version is a wickedly full-flavored taste treat, as the ligero leaf inside ramps up the oomph, but remains well balanced and ultra-smooth with the infusion of delicious Nicaraguan Habano. The flavor profile is earthy, peppery, with strong notes of dark coffee in this Oliva masterpiece. Just an incredibly well-made cigar.

This legendary blend created by the Padron Family often tops cigar lovers “most favorite” lists. It’s considered the pinnacle of cigars by many as it features everything a stogie lover wants: full flavor, superb construction, balance and complexity. All the tobaccos used in this blend have been aged a minimum of five years and its smooth taste is undeniable – like an ultra-rich dark chocolate bar without all the sugar!

A dark, deep and rich stick from Drew Estate that started out as a cult favorite but has entered the mainstream as one of the top rated cigars of last year. Boasting seven different tobaccos from seven different farms in Nicaragua, the #9 is only rolled by Drew’s most experienced torcedors, and the result is pure cigar smoking genius. Sweet and spicy at the same time, with strong flavors of dark cherry.

This newcomer debuted at the end of 2014 and it has made quite a stir boasting its rich, full-bodied spice, but balanced so nicely with a touch of sweetness. I get notes of cedar and a little pepper and that golden brown wrapper is a site to behold. Now, they tell us it’s a proprietary blend of tobacco and that’s just fine with me as long as I can continue to smoke them. This newbie has made its mark among the expensive cigars on this list.

The Virgin Sun Grown has long been a favorite of the cigar smoking world. Produced by the Fuente family, this box-pressed beauty is the true definition of a flavor bomb, starting with six different Dominican fillers, including spicy ligero that lends to the full-bodied complexity. Covered in a well aged, dark and oily Ecuadorian wrapper, this is a cigar that sells like crazy because it’s just that good.

Another brand new offering in 2014 that also made the top rated cigar list. This baby is not only a puro, but the very first all Nicaraguan Monte ever created. Legendary tobacco master Nestor Plasencia collaborated with Montecristo’s Grupo de Maestros Blending Team to produce a smoke that is bold and spicy (an yes, pricey) and definitely not the milder type of Monte the world once knew.

Kind of like movie stars who only make great films, Ernesto Padilla really only makes great cigars. This delicious offering is produced in Nicaragua, wrapped in a supple and shimmering Ecuadorian Habano leaf with a gorgeous reddish-brown hue. This one is in the medium to full-bodied range sporting a very nutty and cedary flavor profile. Another one of those coveted gems named in the top cigars of 2014.

Fuente has a few masterpieces under its belt, and in my opinion, the King T has joined those ranks. It’s a medium bodied, Dominican cigar, but do not let that fool you as it is brimming with rich, full, naturally sweet tobacco flavor. The beauty of this perfectly rolled smoke is the flawless, well aged, Ecuadorian Connecticut wrapper leaf that surrounds the inner blend. Flavor wise it gives off tasty notes of nuts and wood. And if you were curious, the T stands for Tubos, as each cigar is housed in an elegant metal tube.

Among the most expensive cigars on this list, this highly lauded smoke is known for its most unusual double-pointed perfecto shape – reminiscent of old time cigars from yesteryear. Let me first say that you simply can’t let the word Connecticut fool you because this cigar has a whole lotta full-flavor going on. The blend is complex, featuring a range of high-grade leaf from several tobacco growing nations and the wrapper is a luxurious, authentic Connecticut leaf aged a full seven years.

[…] post Luxury Class: 9 Expensive Cigars That Are Worth It appeared first on Cigar […]

[…] in January I wrote the article: 9 Luxury Cigars That Are Worth It and the response was pretty overwhelming. I mean, even we can’t afford to smoke ‘em every day (and not many can), we just LOVE to […]

Good article, Tommy, but it would have been useful to include the retail price of each in the text so we knew how expensive each one was. Just my two cents (which is usually all I can afford). :-)

The Oliva is worth every penny — however I found the Ashton and Liga Privada to both be wanting. The Ashton, especially, was a dissapointment; I have had many Ashtons and have found them all to be at the low end of this segment.

Oliva is a long time favorite of mine. When I tried the Melanio it was several steps above my daily go to cigars so I enjoy it as a celebration on a good day. Liga is also great but I need to try the Padron, love dark chocolate.
Be well Tommy Zarzecki.

Padron FR #45 Maduro would be a better choice…

I have been smoking cigars for about 5 years. I tried many brands from $2 to $27 price range. I must admit that I am mostly impressed with Oliva Vs flavor, easy to smoke, and how it burns evenly; the best I ever smoked. I am convinced that Cuban cigars are overly priced and not as good as it should be. Cuban cigars need American competition so they would improve. The Cuban cigars are operating with the standard of 1960s.