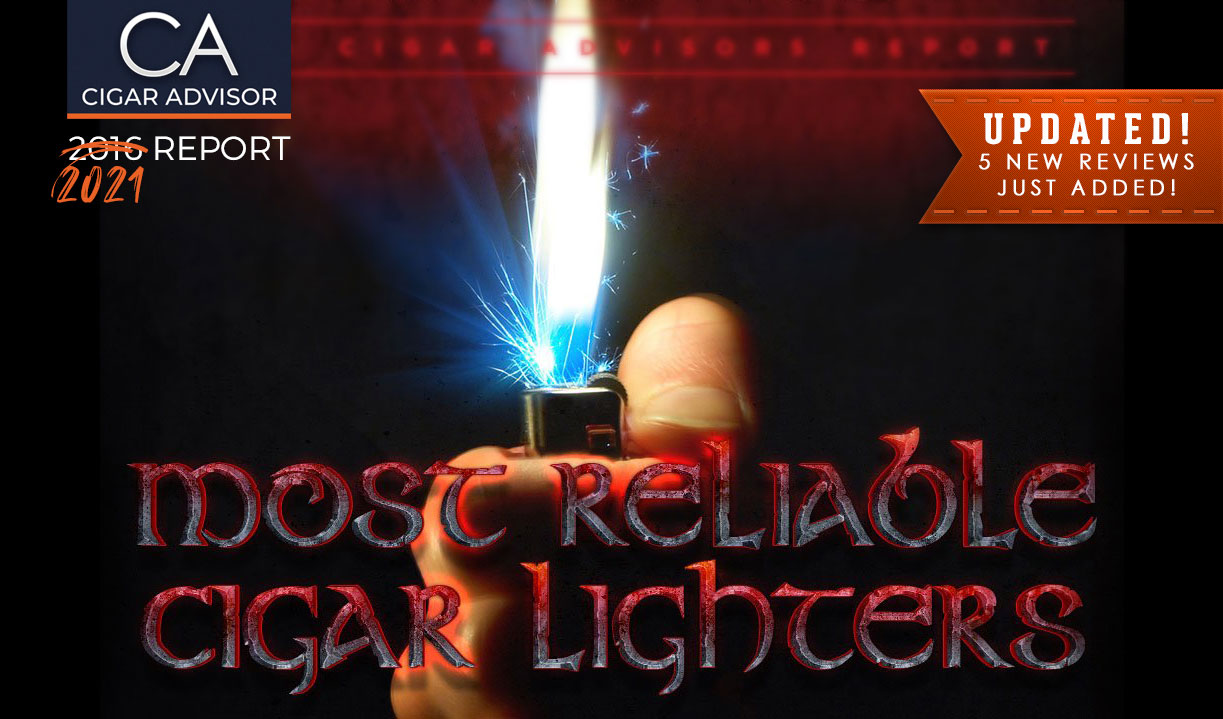 You could say that a cigar smoker without a lighter is like a carpenter without a nail gun. Sure, you could use a match to light your cigar, or a hammer to build a shed, but why would you want to work that hard? In the world of cigar lighters the choices are virtually endless (certainly more than the choice of nail guns), and with all of the different makes, models, and price points to choose from, it might be easier to compile a list of New York City restaurants. That said, you wouldn’t want to eat in just any of those restaurants, and if you’re into smoking cigars, you don’t want to buy just any cigar lighter. That leads me to my next point…

Why you probably have a drawer full of cigar lighters:

Most smokers don’t own a single lighter. They own a drawer full of them. Collecting lighters excluded, the primary reason is that a lot of lighters either break within the first year of use or sooner, or just don’t work all that reliably. That last fact is most often due to user error – including me. Several of my first lighters ended up shit-canned.

Here’s a handy guide on how to prevent that from happening.

Still, some lighters don’t cut it in the quality department no matter how well you care for them. That’s why we’ve got five cigar lighter top picks that would sit comfortably between Keith Richards and a cockroach in a nuclear winter.

Let’s dispel one big myth right away…you don’t need to spend a lot of cash – or even buy a brand name – to score a great lighter. There are plenty – even under $10 – that’ll stand the test of time. And let’s be honest, eh? Buy a Ferrari, and I guarantee it’ll nickel and dime your wallet to death. More than a few customers have told us the best lighter they ever bought was a $1.99 convenience store cheapie.

We’ll admit, going that cheap is kind of like playing the lottery, so we’ll keep it to cigar accessories that we know have an excellent track record from manufacturers we trust. Below, you’ll find some of the best lighters in our arsenal that range from about $7 – $60. Notice how none of them really break the bank?

Lighters like this Vertigo Cyclone are warhorses. This one’s under $7 and feels like it could stop a bullet. I’m not going to test that, but I have been testing mine under strenuous conditions (non-stop cigar reviews, video shoots, and more) over the past two years. 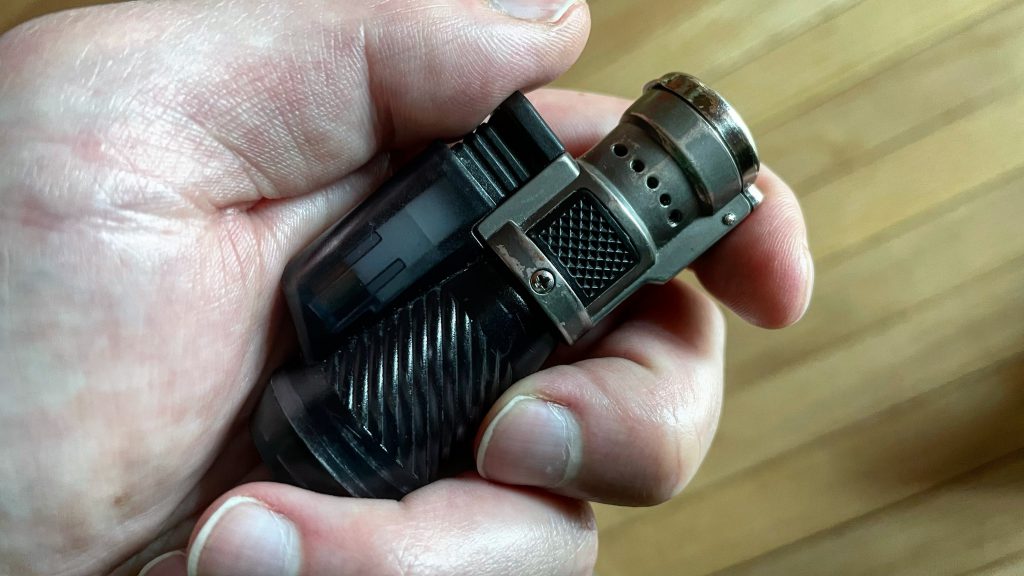 I don’t take care of it like I should. I never clean it. And she never misses a beat. Value like this is few and far between – the ultimate essential cigar tool in my book. Additional features are a large clear-view fuel tank and triple jet torches that work for most cigar ring gauges. Editor’s note: the numbers speak for themselves – this is the highest-scoring lighter at Famous with 4.5 stars across 19 customer reviews!

From its widespread use by military personnel in WW2, Korea, Vietnam, and beyond, the mighty Zippo conquers all in terms of reliability and service record. These lighters are designed tough, and if they can survive the battlefield, they’ll easily manage whatever you could hope to throw at them. Additionally, its patented ‘windproof’ technology keeps its soft flame lit in the harshest conditions. And if that isn’t enough…Zippos are wick-based which means you can purchase cheaper butane without sending your lighter to an early grave.

Everything you need. Nothing you don’t. The Vector Delta lighter features all-metal construction, two red-hot jet flames, and a pop-out punch. And it looks pretty sleek, doesn’t it? All those Ferrari looks at Ford prices. Just bring this – along with your favorite cigar – to the herf and you’re good to go. The Delta also tucks easily into a pocket and holds ample fuel considering its slender frame. At this price range, there’s a serious number of extras that keep the good end of this deal tilted solidly in your favor.

Xikar may be known best for their cigar cutters, but they make excellent lighters, too. We chose the Xikar Cirro high-altitude lighter because it does something that even the most reliable cigar lighters can’t do: work at elevations up to 12,000 feet above sea level. If you ever find yourself stranded on a mountaintop, you can at least enjoy a good cigar until help arrives. Seriously, though, if you live in the Rockies or other high climbs, the Cirro will work where others have fallen short. Other neat features include a fine-looking, yet highly resilient metal housing, fuel window, and an easy flame adjustment wheel. As always, it comes with Xikar’s ironclad lifetime warranty.

Lotus Duke’s oversized profile has a good amount of hand weight for those who like when things feel solid, yet still fits comfortably in your pocket. Add to that the lighter’s three in-line torches, and you’ve got yourself a fan of glowing flame that will light the plumpest of big-ring cigars in seconds flat. What’s more, the Duke will even cut it, too, with a full-fledge guillotine cutter that handles up to a 60-ring beast. Given that it’s quite literally two full-sized tools in one, it’s priced quite reasonably at $59.99.

Our Managing Editor, John Pullo, has a saying: “Your mileage may vary.” Who he stole it from…who knows, but it’s one of my favorites because it rings true. Only you can know for certain how reliable your cigar lighter is. No one’s going to come up to you and ask, “How’s your lighter working today?” That’s why we’ve done the homework for you. Still, we encourage you to ask around, read and compare customer reviews – and most of all, once you’ve found a good lighter, take care of it properly. At least you’ll get more mileage that way!

* Prices shown are Famous Smoke Shop prices at the time of the article update.

For my money, there is NOT a better cigar lighter than the Bugatti. I’ve been using the same one now for about two years. Extremely durable and reliable. GREAT triple flame too. Problem is, I can’t find them any longer. If anyone knows where to buy them please let me know. T h a n k s!

I have at least 7 of those Blazer Micro Torches and 5 of them don’t work. I would never buy another. Blazer is not too good on repairing them either. Now, the two that DO work are excellent.

I’ve gotten to the point now that I buy cheapo lighters. I’ll buy 3-4 at a time and over the next year they all die, but I’ve only spent about $40 and if one does keep on working, I’m good to go. I’ve bought really nice lighters only to have them die within weeks, send they off for warranty work, come back and die again in weeks. I use really good butane. Nothing seems to matter. When I’m outside now, I use a Bic grill lighter!!! $5 and that thing is like the Energizer Bunny….it keeps going and going and going.

Why spend a ton of money on a expensive lighter that’s only going to work the first time you use it. Try a good old fashion BIC, lights first time every time. AT

I will have to chime in here because it took me three years to finally find a cigar lighter that lasted more than a month. Believe it or not, this triple flame lighter has been with me for over a year and has always popped on the first try. It’s pretty beat up now, so just in case, I ordered two more a few months back, and they’re still in the packages, waiting for the day…
Oh, and it just so happens you can get this one here. I really don’t understand why it didn’t make the list. You won’t burn your fingers, and you won’t have to close the flap.
Full disclosure, I don’t work for Famous-Smoke, but here’s a link to the nugget you will not need to replace any time soon:
The Vertigo Inferno.

I’ve got a couple of few lighters so far. I started out with my trusty Zippo. To get rid of any lighter fluid taste in my cigar I just blow through my cigar and that always does the trick. I have 2 functioning butane lighters. I have an unknown blue & stainless steel one that came with a cigar case deal. My current go-to is my stainless steel Regal that I paid about $35CAN for. It works great! I’m watching YouTube videos to learn how to maintain/fix them myself. I’ll probably pick up some seriously cheap ones to practice on. The next one I want to get is the Bugatti M-1. I’ve read a lot of great reviews on it and know people that swear by it.

My Dupont Xtend is still going strong after more than 10 years. Definitely worth what I paid for it. After many cheap lighters I decided to take the big step and it paid off handsomely.

I’ve found the main reason most lighters fail is people don’t release the pressure in the lighter after it runs out of fuel. Hold the lighter upright, pushing in the fill valve with something, a golf tee works great. I have a number of lighters that have lasted for years.

I’ve found that the Prometheus Magma Triple T is a really good reliable lighter. It’s the only lighter I’ve found that I don’t have to refill very often.

I use several brands but you can always count on the Zippo .

Reading Time: 6 minutes Cigarillos – the grandkids of big cigars, and still as popular as ever. Take a virtual tour of the 10 bestselling cigar tins, get their flavor profiles, learn how to store them, and why they’re worth keeping on-hand.